Did you know fox dogs came into existence since today’s dogs have descended from wolves? They resemble foxes, but some wild dogs have evolved to be family pets.

Most dogs that look like foxes are spitz breeds, who are active, intelligent, and high-shedders. They have thick, double coats with upright ears, bushy tails, and pointed muzzles. 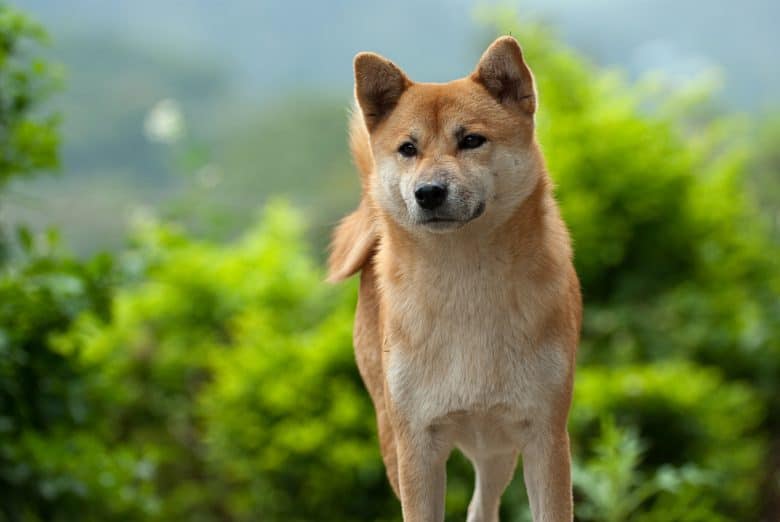 Are you ready to learn more about these foxy pups? Keep reading!

What are the Most Popular Dogs that Look Like Foxes?

Dogs, foxes, and wolves are close to one another when it comes to appearance. However, dogs are different because they can be domesticated, but they can still keep their good looks from the wild.

So, let’s take a look at some of the most popular dogs that look like foxes.

What are some toy and small dogs that look like foxes? Below is a list of some of the best dogs small in size that resemble adorable foxes.

The Alaskan Klee Kai may remind you of a small Husky. This pooch is intelligent, playful, and loyal to their families.

While they’re affectionate, they might be stand-offish to strangers at first and will need early socialization with others.

Their thick double coat can come in various colors and a red coat is one of them. This makes them look like fox dogs.

The American Eskimo Dog looks similar to the Arctic Fox. This dog breed is affectionate, loyal, and makes great protective watchdogs. They enjoy playing outside, even in the cold weather.

Luckily, they have a heavy double coat that protects them from harsh weather. The coat does shed a lot, though, so you’ll need to keep up with grooming.

Basenjis are also known as the Barkless Dog. They are independent, aloof, intelligent, and have high energy levels. While this is the least common dog that looks like a fox, it’s still a popular fox dog breed.

This doggo needs plenty of activity along with physical and mental stimulation.

The Long-Haired Chihuahua can resemble a fox. In fact, they look closely like a fennec fox with their long, pointed ears. This doggo will bond with their favorite humans and be stand-offish with strangers.

Despite their small size, they need ample exercise and playtime to keep them happy and fit.

Also known as the Barking Bird Dog, the Finnish Spitz originated in Finland. They require a lot of mental and physical stimulation every day.

This means they will do well with an active family to take them on long walks or hikes. On the other hand, this pooch will bark a lot when they’re bored, especially when their exercise needs aren’t met for the day.

Spitz-type dogs arrived in Iceland with Vikings thousands of years ago for the first time. These herding dogs helped herd sheep, thus getting the name Icelandic Sheepdog. This pooch is friendly, energetic, playful, loyal, and loves to learn.

The Japanese Spitz resembles an Arctic fox. This adorable pooch will do well in an apartment or a house with a fenced-in yard. They love to go on adventures with their humans, making fun companion dogs. In addition, they’re loyal, smart, and eager to learn.

Did you know the Pomeranian ancestors were bred as sled dogs? Yet, this small dog breed weighs up to only seven pounds.

Poms have big personalities and love to spend time with their families. They make great companion dogs but have a loud and proud bark.

Schipperkes look like a small black fox who loves to bark. Despite this Little Captain being too vocal at times, they are affectionate and loyal.

They’ll enjoy being with an active family, going on adventures, and running around in the fenced-in yard. However, they do have a high prey drive and may chase smaller animals.

The Shiba Inu is a hunting dog from Japan. It’s a Spitz breed that’s intelligent and independent, which can make them challenging to train.

While they develop aggressive or possessive tendencies, they are overall loyal and affectionate with their family. However, they may be wary around strangers at first.

Originating from Italy, the Volpino Italiano was bred to be a guard dog. Their job was to alert the Mastiffs of an intruder coming.

This pooch almost became extinct in the 1960s but was saved. However, not many people know about this spitz-type breed, and they’re not well known outside of Italy.

If you’re looking for a dog breed that’s not small but not too large, then a medium-sized dog that looks like a fox is a good choice to look into.

The Keeshond is another adorable breed that resembles a fox. They are similar to Pomeranians and Samoyeds. This doggo doesn’t like to be left alone for long periods.

They enjoy the company of their humans and will love to play with them all day long. A daily walk or run is ideal for this four-legged friend.

Korean Jindo Dogs got their name from where they came from, Jindo Island, Korea. They resemble a fox with their triangular ears. This is a stubborn pup, which may make it challenging to train.

However, they are smart and will enjoy being around their family. They may not get along well with other animals, so they’d prefer to be the only pet in the house.

Norwegian Elkhounds are great companion dogs, though they may be prone to separation anxiety if they’re home alone for too long. They are playful, protective, and loyal to their family members.

This hound is another high-energy dog breed that will need rigorous exercise every day.

The Pembroke Welsh Corgi is one of the best dogs for herding. They are hard-working, friendly, and loving pups. They are about a foot tall and can weigh up to 30 pounds.

This pooch is popular with Queen Elizabeth II, and they were first introduced to Wales. This adorable doggo makes a great family pet.

Originating in the Arctic Siberian Area of Russia, the Samoyed is another spitz breed. This intelligent breed was bred to be pull sled dogs but now they are playful family dogs.

They are affectionate with their family, but they may tend to chase smaller animals and wildlife.

Finally, even though they’re a bit bigger, there are a couple of large dogs that look like foxes. Let’s take a look at them.

Also, known as the Silent Hunter, the Akita is another Japanese Spitz breed. Similar to the Shiba Inu, this pooch is temperamental and can be difficult to train.

However, they are loyal to their family and make excellent guard dogs. This doggo has high energy levels, so lots of daily exercise is a must.

The Kugsha is native to the United States. They were bred to carry large loads across long distances. They are most recently a family pet and are still getting used to being domesticated.

So, this dog breed isn’t the best to have around small children. They are, however, clever and attentive and will enjoy being around their family members.

There are more fox-like dog breeds where that came from, though. If none of the breeds listed above tickle your fancy, then here are some other dog breeds that look like foxes.

These doggos will also be a great addition to your home.

Can foxes be pets?

Unfortunately, foxes do not make great pets. In fact, it’s illegal to own a pet fox in the United States. They are better off in the wild because that’s what they’re used to.

Sure, foxes and dogs are both from the Canidae animal family, but dogs have evolved more than foxes.

Having a fox at home will be difficult for them to adjust to. They may be stressed easily since they’re not used to being in a home, and they’ll be difficult to train.

Foxes, while they’re adorable, won’t do well in a house or an apartment. So it’s best to stick with dogs that look like foxes.

Which is the most fox-like dog?

Believe it or not, the most fox-like dog is the Shiba Inu. This pooch has many foxy features, but its background is more notable. According to the American Kennel Club (AKC), the Shiba Inu arrived in the United States in 1954.

A military family brought over this dog breed after they found it fighting for its life during World War II. Shiba Inus were almost extinct. Now they are one of the more popular dog breeds as family pets.

The Alaskan Klee Kai looks an awful lot like a Husky. However, this doggo can have a red coat, which resembles a red fox. They are small in size, similar to a fox.

Yes, there are plenty of long-haired dogs that look like foxes. Chihuahuas share some features of foxes, but they typically have short hair. There are Long-Haired Chihuahuas, though, and they resemble foes quite a bit.

Other dog breeds have long hair that looks like foxes as well—for example, the Icelandic Sheepdog and Norwegian Elkhound.

Are there dogs that look like foxes and don’t shed?

Unfortunately, there aren’t many dogs that look like foxes that don’t shed. One feature dogs and foxes share is a long coat or a thick double coat. These pups typically do shed quite a bit.

In other words, if you want to bring home a furry friend that looks like a fox, chances are you’re going to need to keep up with grooming and brushing quite a bit. Also, try not to mind fur all over your furniture and clothes.

What are breeds to avoid if you are looking for a dog that looks like a fox?

If you have your heart set on getting a furry friend that resembles a fox, there are a few breeds that you might want to avoid.

For example, most scenthounds, bully breeds, and giant breeds don’t have foxy features such as upright ears and bushy tails.

Some breeds to avoid would be the Basset Hound, German Shepherd, Newfoundland, Great Dane, and Saint Bernard, to name a few.

Which Dog that Looks Like a Fox is For You?

You might be wondering, do I want my dog to look like a fox? Unfortunately, looks and appearance don’t have anything to do with how a dog’s personality is or how well it’ll fit into your family.

So, when searching for a furry friend, it’s best to research their breed’s needs and general temperament.

However, there are plenty of dogs that look like foxes that will be well-suited for any home.

As long as you don’t mind keeping up with their grooming needs and sometimes aloof personalities, most of the dogs on this list will be great family dogs.

With proper training and early socialization, your new four-legged friend will make a great companion.

Do you have one of these dog breeds at home? Let us know in the comments below!