Home » Breeds » The Gentle Giant: Is the Great Dane Lab mix for you?

The Great Dane Lab mix, also known as Labradane, is a handsome giant and a cross of two popular breeds: the Labrador Retriever and the Great Dane.

Not only is this designer dog great with kids, but it’s also incredibly loving and loyal. 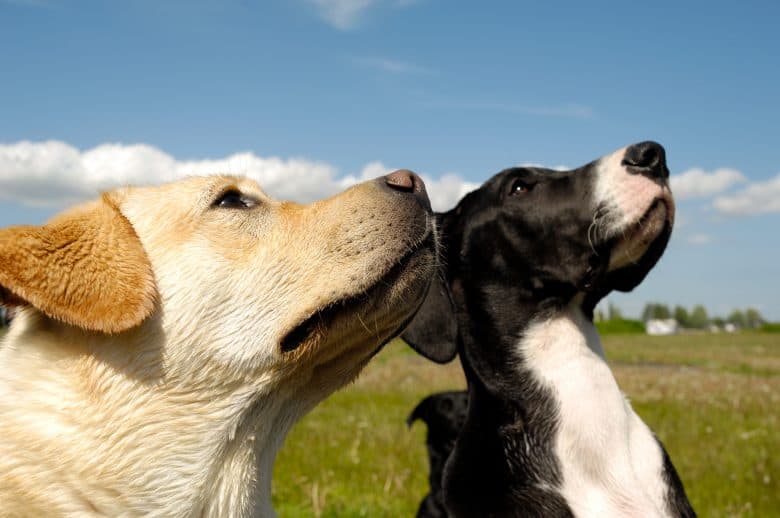 This article will discuss all the pros and cons of the Labradane, so you can decide if it’s the right pet for you.

Where did this gigantic dog come from?

The Labradane was first introduced in the 1980’s as the small dog trend emerged. Some theories suggest the goal was to create a smaller version of the popular Great Dane.

These dogs were bred as companions, and they’re one of the most popular Great Dane mixes out there.

The Great Dane was first bred to hunt wild boars in 17th century Germany and are sometimes called German Mastiffs.

By the end of the century, their more gentle and nurturing side took over– thus, the hard-earned nickname “gentle giant.”

These dogs also have a long history in England, where they were used to protect estates, carriages, and nobility; even though they were gentle companions, they’ve also been intimidating, protective guard dogs.

It’s not a surprise, since this breed was developed by using an English Mastiff and Irish Wolfhound or Irish Greyhound.

Their appearance is characterized by a large head, lean strong body, and long legs. They can be fawn, brindle, harlequin, black, mantle, and blue. Unfortunately, this breed has only a 6 to 8 year lifespan.

For 29 years, Labs has triumphantly taken first place in most popular breeds according to the AKC list– their 2020 list was recently released, and to no surprise, they’re still number one.

There are two camps: American Lab and British (or English) Lab. The American Lab is characterized by a lanky, more athletic appearance; the British Lab is more blocky with a wide, full stature.

Both Lab types rock thick double-coats that come in yellow, black, or chocolate.

The Labrador Retriever began in the 18th and 19th century Newfoundland, where they descended from the St. John’s water dog that helped fishermen and hunters retrieve their catches.

They’re recognized by the AKC in the Sporting Group.

Labrador Retrievers have a 10 to 14 year lifespan, which is good news for the Labradane.

They generally rock floppy ears and a large gait, with a muscular body, and a strong head. This appearance may differ depending on which type of Labrador of which your Labradane is bred.

How big will a Lab Great Dane mix get?

Labradanes do the majority of their growing within the first 6 months, and completely stop growing after 12 to 18 months.

Due to their size, they’d do best in a large family home with lots of space both indoors and outdoors. Apartment-living just won’t cut it for this big guy. So, a house with a large, fenced-in yard would be best.

Coat & Colors of the Labradane

Great Dane Lab mixes have short, dense coats. While there are some other variations, they typically come in these colors: brown, black, fawn, yellow, chocolate, and white.

They’re usually solid colors, but they could potentially inherit markings from their Great Dane parent, such as brindle, harlequin, or blue coloring.

See how cute Great Dane Lab mixes are by watching this video of Easy. She’s acting up whenever you do a stare down with her:

Great Danes and Labrador Retrievera have similar personalities, which means your Labradane’s personality is more easily predictable than some other crossbreeds who may be more of a luck-of-the-draw.

They love their owners and would do best with a large family environment rather than a single person.

Although, they don’t always know their size and can act a little goofy, so be cautious and supervise.

They’re tolerant of other dogs. Be advised: in the dog world, “tolerant” doesn’t mean “okay with.” Your Labradane may not get along with other dogs in the house.

It’s important to understand the warning signs from a dog that may be uncomfortable in the presence of another, as well as how to make proper, safe introductions if it is the case.

Both Danes and Labs are extremely protective and loyal— you should feel safe with a Great Dane Lab mix on guard in your home. Be aware that although this breed is super friendly, they could be wary of strangers and may need time to warm up.

Unfortunately, these dogs do suffer from separation anxiety issues because of desire for affection. They would do best in a family environment in which at least one person was home at all times.

Socialization for your puppy is super important as the first year of a puppy’s life is the most pivotal stage for them to learn social cues and behaviors.

Due to their inheritance of extreme intelligence from their Lab parent, along with the Great Dane’s strong-willed personality, these dogs can be stubborn.

But their intelligence makes them easy to train; they’re eager to please their owners, too. Socialization, crate training, and early obedience training is imperative.

You need to be leader of the pack. With a dog this size, you don’t want to risk being dominated or not respected; someone could get hurt.

How to care for the Labradane

They do require regular brushing at least twice a week. Be gentle and brush in the direction in which their coat grows.

The Lab is a heavy shedder due to their double coat, and the Dane is a mild shedder. Your Labradane will most likely inherit the Dane’s short dense coat, though, which is good news.

These dogs moderately shed but will shed more during certain seasons, like Spring.

This breed is fine living in all climates; watch out for warmer weather, and make sure heat exhaustion is not a risk when spending time outdoors with your Labradane.

Drooling concerns play a role in the cleanliness of your Labradane and some extra work. Ptyalism is excessive salivation, a condition that affects Great Danes– due mostly to their large jowls.

Excessive drooling can be a pain because it’s messy, especially when these dogs shake and splatter-paint the room in drool.

Your Labradane may inherit drooling from its Dane parent, or it may not drool at all, because Labradors don’t have this problem.

Floppy ears require extra attention. You should clean your Great Dane Lab mix’s ears at least once a week, wiping it with a damp cloth; Use cotton balls and dog-specific ear solution.

If possible, brush your dog’s teeth every day. Dental hygiene is linked to heart disease, among other things. And since both Danes and Labs are prone to serious heart conditions, you want to stay on top of this.

Bathe once a month or as needed. Since these dogs tend to love the outdoors, they may inherit some water and mud-loving traits from their Labrador parents. This may require a bath more often.

Just be careful of over-bathing because it can lead to skin issues. Use dog-specific oatmeal or aloe shampoo.

What to feed your Labradane

Your Labradane will need about 4.5 cups to 6 cups of dry dog food, divided into three meals a day.

Their food should be formulated for large breeds with moderate activity level. And they need to stick to a healthy diet. Danes tend to overeat, which can lead to bloat or obesity.

Give them 30 minutes after eating before exercising to avoid risk of bloat.

Aside from giving your pet smaller meals or avoiding free-feeding, you can make sure your dog doesn’t gobble up his food by using a slow feeder instead of regular doggy bowls

Great Dane Labs need 30 minutes of brisk walks twice daily, or run. They may also like a good swim. As mentioned, it would be best to have a fenced-in yard because both the Dane and Lab have magnificent noses as hunting dogs which may lead them to wander away.

These dogs need a strict, consistent exercise regimen in order to decrease risk of stiffness or mobility issues that may arise from inactivity.

Labs love water, so your Labradane might share this trait. Check out this video of Buddy, a black Labradane with a strong affinity for water:

Your Labradane will also require mental stimulation– a bored dog is a potential destructive one; provide interactive toys.

Despite controversies over the crossbreed versus purebred debate, there is some evidence to suggest crossbreeds are in fact healthier than the latter because of hybrid vigor and larger gene pools.

Unfortunately, their lifespan is only 8 to 12 years. This is largely due to the Danes incredibly short life expectancy.

Both Labs and Great Danes have some serious health issues. Many of these also have connections or are directly related to obesity:

It’s important to get your Labradane health-tested after bringing them home. Consult your veterinarian about what tests they may run to ensure your Labradane’s best chance at health or early detection of any potential health issues.

It’s a tall order, but I’m in: Where can I buy a Labradane?

Most crossbreeds end up in shelters, unfortunately. The Labradane is no different. But due to its popularity, these dogs are not difficult to find.

If you’re interested in shopping through a breeder, though, I caution you to make sure you ask the right questions and do extensive research. A responsible, reputable breeder will take time answering any and all your questions.

Make sure they did genetic testing for parents before breeding. They will also have a strict adoption process both before and after taking your puppy home.

Make sure the breeder lets you visit them and meet both momma dog and poppa dog– if they don’t allow this, that’s a red flag.

While we haven’t found reputable breeders that specialize in this hybrid, marketplaces like Keystone Puppies have available Labradanes.

You may also want to search Great Dane mixes and Labrador Retriever crossbreeds for adoption.

There are tons of Dane and Lab rescue groups where you might actually find a Labradane:

If you’re feeling unsure about taking a “giant” risk with this hundred-pound lover, then you may want to take a look at some of these similar breeds: 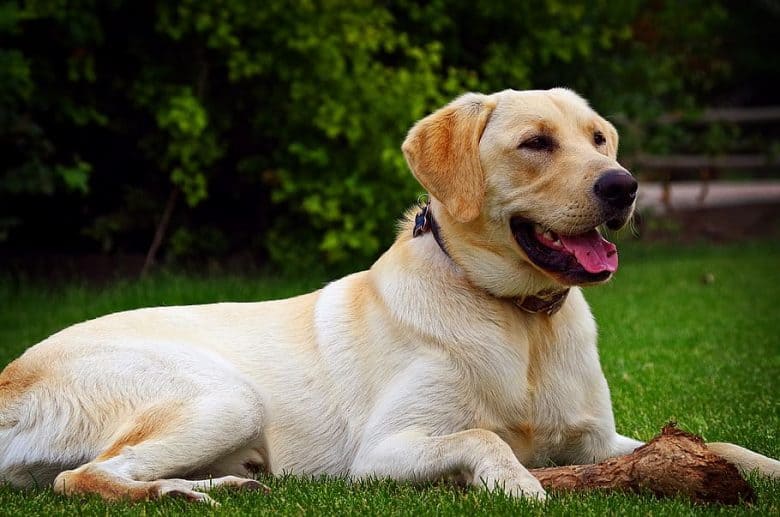 The Goldador is also a mix of two popular breeds. Full grown at about 60 to 80 pounds (27 to 36 kg), and 22 to 24 inches (56 to 61 cm) in height, their size is a bit more manageable than a Labradane, This crossbreed is a good alternative if you’re looking for an apartment-dwelling dog.

Also called Great Danoodle, this designer dog is made up of a Great Dane and typically a standard-sized Poodle. It’s difficult to predict this canine’s size, but it’s possible you may end up with a full-grown dog the size of a Dane.

This fido loves people as much as a Labradane, but may inherit some serious stubborn tendencies from its Poodle parent that may make training difficult.

This mixed breed takes the giant giant stature and the playful nature of the friendly and family-oriented Golden Retriever. They’re a perfect mix of quiet and energetic. They also typically get along with other dogs and children.

The verdict: Do you still want a Great Dane Lab mix?

If you want a large, affectionate best friend a bit obsessed with you, the Labradane fits the bill.

These dogs have extraordinary characteristics: patience with children, loyalty, and intelligence. Not to mention how they love being both active and lazy– the best of both worlds.

However, the potential health risks, short lifespan, and attention requirements are quite the risk as compared to other crossbreeds.

Is the gentle giant worth the risk? Comment below.