If you’ve ever laid eyes on a tiny Chihuahua, you know that they are precious. But you probably haven’t given much thought to just how varied the Chi appearance can be.

We usually think of fawn or tan Chis, but did you know that there are more than 10 different Chihuahua colors? And that doesn’t even count shades, hues, and markings. 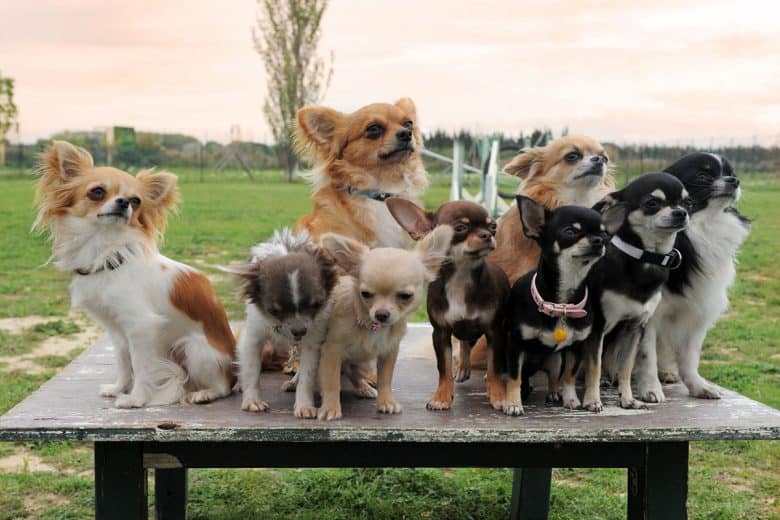 Let’s have a look at the possibilities!

Origin: How is the Chihuahua coat so multi-colored?

The Chihuahua’s history has always been up for debate. Some theories hold that Chihuahuas were brought to South America from China.

But many historians believe that Chis are descendants of an ancient South American dog, the Techichi.

Both theories agree, however, that Chihuahuas were likely interbred with other small dogs at some point.

Proponents of the import theory argue that Chis were crossed with hairless canines. Supporters of the Techichi theory point to the Chihuahua’s evolving place in South American history as evidence of interbreeding.

The Toltec civilization held the Techichi in high regard. When the Aztecs conquered the Toltecs, they further developed the breed.

Other canines were probably introduced to the Chihuahua bloodline during this refinement stage.

Either way, we know that new shades and types of fur were introduced over decades and centuries.

hile some of the terrier-like Chihuahua’s earliest features changed with time, its kaleidoscopic coat colors remained.

The Chihuahua Colors and Appearance

For some dog breeds, coat color is important. It can make all the difference when it comes to registering or showing your canine in conformation events.

Fortunately, the American Kennel Club (AKC) lists 30 solid colors and color combinations. According to their breed standard, any color is accepted, whether solid, splashed, or marked.

They also specify an additional 11 accepted markings. When it comes to choosing a Chihuahua color that lets you register your pup, the odds are certainly in your favor!

No matter if you have a long-haired Chihuahua or one with short hair, an Apple Head or Deer Head, they could inherit any of these colors and patterns.

This may be a good time to mention that Chihuahua puppies can change color as they grow or mature.

Your little guy will exchange his puppy color for his mature coat in his first year of life. Brindling, sabling, tans, and beiges can all become more or less pronounced. Needless to say, your Chi’s coat is full of surprises!

What are the most common colors for Chihuahuas?

Chihuahuas maybe just one of these colors or have parti-color coats, which is a fun way to say “multi-colored,” but each primary color has its own typical patterns or combinations.

Before we jump in, check out this adorable litter of Chihuahua puppies. You can see shades of common colors … and a few rare ones, too!

Black Chihuahuas could be solid black, black and tan, black and white, black and merle, black-sabled silver, or black tricolor.

Fawn Chihuahuas can be anywhere from light tan to blue fawn to shades of red. Interestingly, red Chihuahuas are often more of an orange or mahogany color.

Cream Chis have the same types of coat variations. Some are noticeably beige, while others look like a very light fawn.

Especially since Chihuahuas can pull a metamorphosis and change their coat color, it’s hard to pin down which of these colors they’ll end up having. Even looking at their parents’ coats isn’t foolproof.

Take Black Chis, for example. The genetics behind dominant and recessive genes means that your puppy could come from two Black Chihuahua parents and turn out fawn! Or red, or white.

You really won’t know what color your Chi will be until they’re about a year old.

Regardless of their final fur color, you shouldn’t see any marked difference in personality.

A few dog owners mistakenly believe that coat color affects temperament, but that just isn’t the case. The only things that determine your dog’s behavior are their parents’ traits and how you raise them.

What are the rarest Chihuahua colors?

Think all Chihuahua coats fit into run-of-the-mill categories? Think again! There are several exotic Chihuahua shades, some that you may not have seen before.

Blue Chihuahuas look almost like the tiny dog version of blue Pit Bulls. They’re incredibly rare–and incredibly expensive. If you come across a blue Chi, expect these blue-colored pups to cost upwards of $10,000.

Merle Chihuahuas, while exceptionally cute, are rare for a reason.

The same genes that cause merle coloring can also cause a host of health issues, so intentionally breeding merle pups is generally considered unethical. (More on this in a bit!)

Brindle Chihuahuas have truly fascinating coats. They often have spots of whites or tans, but their bodies look striped.

Brindle Chis come in all kinds of color combos, like chocolate or blue brindled fawn or fawn brindled black. In each case, the Chihuahua has a main base color with the secondary color forming their brindle stripes. 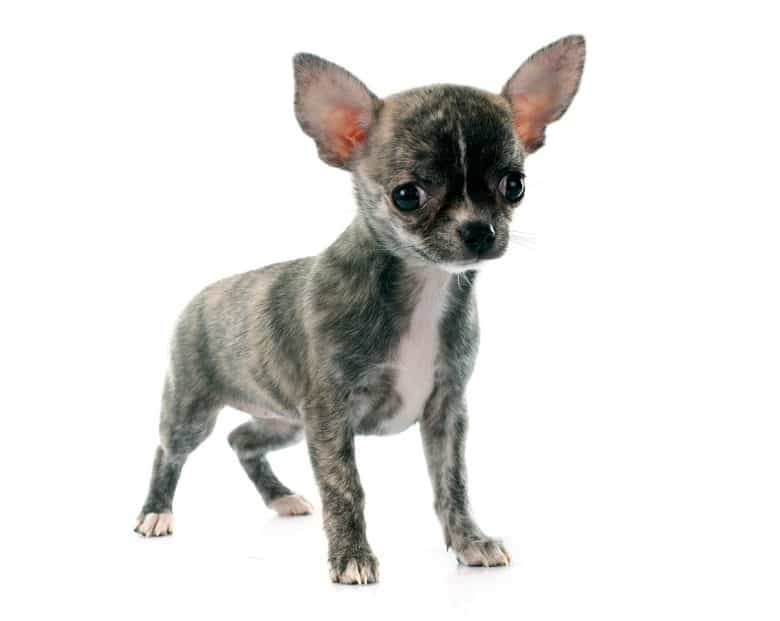 Lavender or lilac Chihuahuas are technically a watered-down brown, but their violet-tinted coats certainly don’t look it!

The lilac shade is notoriously hard to produce. Breeders usually happen upon lilac Chis by chance, so you might have to search long and hard for one of these pups.

Likewise, the silver Chihuahua isn’t really silver at all. They’re actually a lighter gray, with a few white hairs thrown in. The mixture of white and gray fur gives them a shiny, metallic appearance.

But the rarest Chihuahua of all is the pure white Chihuahua. You can find snow-white Chis in both smooth coat and long coat varieties, assuming you can find one at all.

Like Chis of other colors, their wintry coat doesn’t impact their temperament. You can expect the same feisty yet devoted pup from a pure white Chi as a fawn or chocolate.

What markings does the AKC accept?

If your head is spinning just from the solid colors, take a breath before we jump into Chihuahua markings.

Here’s a list of the different markings listed in the Chihuahua’s official AKC breed standard:

Note that the “S” denotes what the AKC deems “standard markings.” The others are still acceptable and won’t prevent your Chi from dog shows or being registered.

Generally speaking, your Chihuahua dog’s coat color won’t be an indication of their genetic wellness. That said, specific colors do come with a risk of poor health.

Remember that caveat we mentioned about merle coats? The same genes that cause that beautiful merle color are also connected to some severe health conditions.

This is why the Chihuahua Club of America has made a point to denounce double merle breeding (mating two merle dogs together).

Deafness and eye issues are both fairly common in double merle dogs. Joint and heart problems may also be more likely.

You’ll want to be wary of Chihuahuas with blue eyes, as well. Blue eyes in and of themselves aren’t bad, but they’re not typical for the Chi.

These lighter-colored eyes could signify unhealthy genes in your pup, so proceed with caution.

Just as a merle coat or blue eyes can be a red flag, the remaining coat colors aren’t exactly a good health predictor.

Chihuahuas of all tones can experience health problems related to their small size, including luxating patellas and low blood sugar. This is especially true for teacup Chihuahuas, no matter their coat color.

Where to buy Chihuahuas of a specific color

Finding a breeder who specializes in one coat color or another isn’t as simple as it sounds.

Because these furry little dogs like to keep us guessing, there’s no way to guarantee what color a litter of Chihuahua puppies will be. Any breeder who tries to say otherwise might be dishonest.

As you start researching Chihuahua breeders, you’ll find that many of them list a range of coat colors. These may be the colors the breeder aims for or what they usually see in their breeding stock and pups.

While this still isn’t a surefire way to predict your Chi’s adult coloring, it can help you narrow down your choices.

These websites have solid examples of how experienced breeders describe their puppies’ colors and markings:

Which Chihuahua color will you choose? 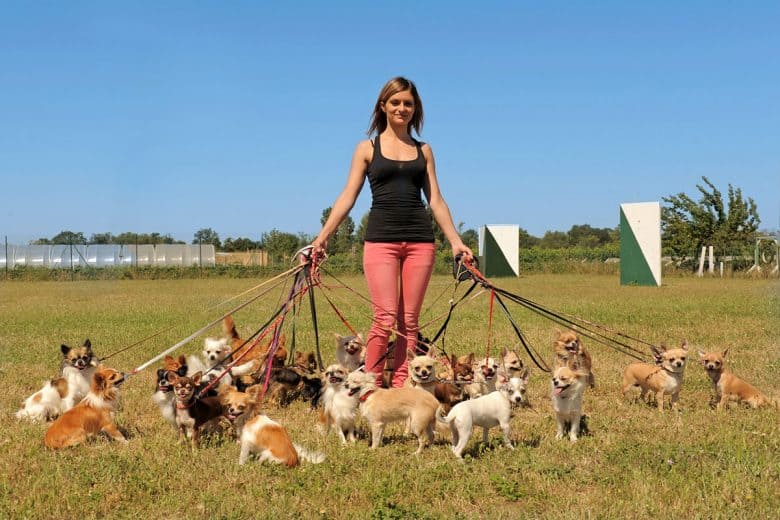 With so many options, it’s easy to feel overwhelmed. Rest assured that the Chihuahua you’ll add to your family will be cute as a button, regardless of their coat color!

You can always narrow down your preferences based on rarity and availability. Then, you can get shopping for your perfect Chi!

So, which Chihuahua color is your favorite? Tell us in the comments!