Home » Breeds » What do you know about French Bulldog colors?

The French Bulldog breed is one of the cutest dog breeds around. Some people will pay tens of thousands of dollars just for one. And as if they aren’t irresistible enough, they even come in a teacup size.

These popular pooches come in a rainbow of colors. If you’ve ever wondered what’s the difference between a Blue Fawn French Bulldog and a Blue Frenchie, you’ve come to the right place!

The history of French bulldog colors

Descendants of the English Bulldog, Frenchies have come a long way since being ratters for lace makers and later being touted around as purse dogs.

The rich variety of colors weren’t as rampant as they were when the breed first took off.

When the AKC laid down the guidelines for the French Bulldog in 1897, dark brindles were favored while all other colors were permissible.

In 1911, the breed standard went through an overhaul and a few colors were singled out and disallowed.

What are the breed-approved French Bulldog coat colors?

If you’re planning to show your French Bulldog, you’ll be limited by what colors you can get. There are only a few official colors and pattern combinations recognized by the American Kennel Club.

However, your best chance of bagging a win is with a Brindle, which is the original Frenchie color.

Below we have a breakdown of the acceptable colors, patterns, and markings.

The fawn color can range from a light tan to a dark reddish color, which is often referred to as Red Fawn.

A Fawn Frenchie commonly has darker fur around its head and ears. Fawn coats might also have a white patch on their chest.

They sometimes come with a black mask, but it’s more common to see a Fawn Brindle Frenchie. Spotting or ticking is undesirable.

Some might even refer to them as reverse-brindle Frenchies. These dogs should have dark eyes and pigmented noses and ears.

Piebald is one of the most recognizable patterns on the Frenchie. Pied Frenchies have to be mostly covered in white, with patches of another color along with their skulls, neck, and chest.

These splashes of color can be black spots or a light trace of brindle. You can even find a Blue Pied coat Frenchie, although they are quite rare.

One problem with these piebald dogs is that they are more at risk for health issues such as deafness or skin sensitivity.

The most popular and commonly seen Frenchies come in a brindle. It’s not a color, but rather, a pattern. These tiger stripes on a Frenchie can range from intense and tightly knit stripes to sparse striping.

They are often dark-coated but can sometimes have a white patch on their chest.

They can also be all kinds of color, although the AKC only recognizes brindles on black, white, fawn, or cream.

Seal Brindles are so dark they are nearly black and the Blue Brindle is a disqualification in the show ring. In fact, any blue at all is undesirable by the AKC and French Bulldog Club.

A less exciting color, but one of the original shades. They sometimes come with a black mask. This gorgeous eggshell color is a clean and solid color which is hard to breed for, making it a rare pigment.

Dogs of this color are often more expensive.

Along with the aforementioned colors or patterns, purebred and conformation Frenchies can also have a black mask or have markings which are either black, white markings, or brindle markings.

These markings can appear anywhere on the body, including the face.

You can also find piebalding or ticking in Frenchie coats. Ticked look like a smattering of dots on their legs or body.

While it is accepted by the official kennel clubs, it is considered undesirable and points will be deducted.

What are the rarest colors of French Bulldogs?

Rare colors are often created with recessive genes which can cause health problems, which we will detail below. The rarest colors are likely the Merle or Lilac Frenchies.

These dogs come at a high cost, both to your wallet and to their health.

Also called Mouse Frenchies, they have a unique blue coat thanks to a recessive gene that causes the black to dilute and give off a blue sheen.

The dilution gene can affect any standard color. The Fawn Frenchie that has this gene will become a Platinum Frenchie, with a light-colored ashy coat.

Since it’s not standardized, you can get quite a bit of variety with this color. Blue coats can be fawn or brindle. In both cases, the dog will have inherited the dilute gene from both parents.

Blue Fawns can be a very light silver blue or a deep apricot, shaded with blue. Read more about this color curiosity at our post about the Blue French Bulldog.

Lilacs have both copies of the recessive genes that create Chocolates or Merle puppies. They are almost a roan color, which is very rarely seen in dogs. They generally have light-colored eyes.

It’s been rumored that Merle Frenchies were once crossed with Chihuahuas. They have random splashes of color all over their body and often have blue eyes.

This is the only color that the AKC will reject from their register, so you will not be able to get any papers for your Merle Frenchie puppy.

A completely black dog with no visible markings or brindling. A common color despite being unrecognized by kennel clubs. It’s easy to mistake a Black Brindle for a Solid Black, but Black Brindles are eligible to be a show dog!

Solid blacks might have a white chest, but don’t have any other markings anywhere else.

Sable dogs have cream-based fur that’s tipped with black. Easy to mistake for a Fawn Frenchie, but sables usually have cream legs, and a heavily shaded topline and chest.

It’s possible to be a Blue Sable, where the black-tipped hairs have the greyish blue tinge. An Apricot Blue Sable Frenchie is one of the most striking dogs you’ll ever come across.

Chocolate French Bulldogs are hard to breed for because chocolate is also a recessive gene. They can have dark coats that are almost black, to the color of milk chocolate.

His peepers can also be any color, from a golden yellow, blue, or the generic brown. This might heighten his risk for cataracts.

The Different Colors of French Bulldogs

What’s cuter than having a Rottweiler’s coloring on a cute little dog like the Frenchie? Unfortunately, black and tan is a dominant color pattern and the reason why it’s disallowed by the breed standard.

It would be a shame if all other colors were erased and replaced by only Black and Tan Frenchies.

Black and White dogs are also faulted by the AKC and will be disqualified from joining dog shows. Blue and Fawn is another rare color that isn’t recognized by the kennel club since it expresses the dilute gene.

Blue and Fawn is another rare color that isn’t recognized by the kennel club since it expresses the dilute gene.

Is it okay to get a rare-colored Frenchie?

If you want to get a rare Frenchie because they look cool, think again. Selective breeding often causes problems and bad breeding practices could leave you with a sickly pup.

While some colors might look trendy, don’t forget that fads fade. What is rare today could be common tomorrow. It’s better to get a dog for its temperament than its appearance.

Furthermore, reputable breeders seldom breed for rare-colored Frenchies as they breed for conformation.

People who breed for rare French Bulldog colors are often doing it for the money and will rather spend their funds on advertising fees than their dog’s medical bills.

That’s not to say that there aren’t proper fanciers of the breed who are enamored with a particular color and decide to breed them specifically, but they are few and far between.

Precaution should be taken when you’re searching for such breeders.

Do Frenchies change color as they age?

All dogs go through some color changes as they mature, to varying degrees. For Pomeranians, they can be almost unrecognizable, but for Frenchies, their changes are not so drastic.

It’ll only be a slight lightening of the coat. French Bulldog puppies are often born a touch darker and their color will become more vibrant over time.

Color has no control over temperament, whatsoever. Frog dogs of all colors and patterns will all exhibit the same loving and humorous nature.

They don’t require a whole lot of exercise and are famously known for snoozing at your feet.

Gentle with children, they are a wonderful family pet, if a bit temperamental on occasion. These batpigs have been described as free-thinkers and can have a small stubborn streak.

Socialization is extremely important because while they are tiny, they can get quite territorial and possessive.

Certain colors, such as white and blue eyes, are closely associated with deafness.

Merle dogs are the most problematic, healthwise. Double Merles which are bred from two Merle parents can cause organ failure in their puppies.

White and White pairings are also strongly advocated against because of poor vitality.

How about French Bulldog eye color?

All Frenchies are born with blue eyes which should darken at around 10 weeks old. Some dogs retain their blue eyes, mostly in Merles and Whites.

Heterochroma can also be observed in this breed. That’s when you have eyes of a different color. This happens in Siberian Huskies as well as Australian Shepherds.

Your little Clown Dog won’t need much brushing. Once a week is more than enough, but if you want your pup’s coat to shine, you can brush them every day.

This stimulates their coat and helps with distributing the natural oils on your furkid’s coat.

When you’re bathing your dog, you want to make sure to use a gentle shampoo that’s moisturizing and non-irritating.

You can find this at your local pet store or through Amazon. Hold off bathing them for as long as you can. Bathing them four times a year is recommended.

The only time you should bathe your dog frequently is if he has a skin condition. In which case, you should listen and do as your vet advises.

Which French Bulldog color will you choose? 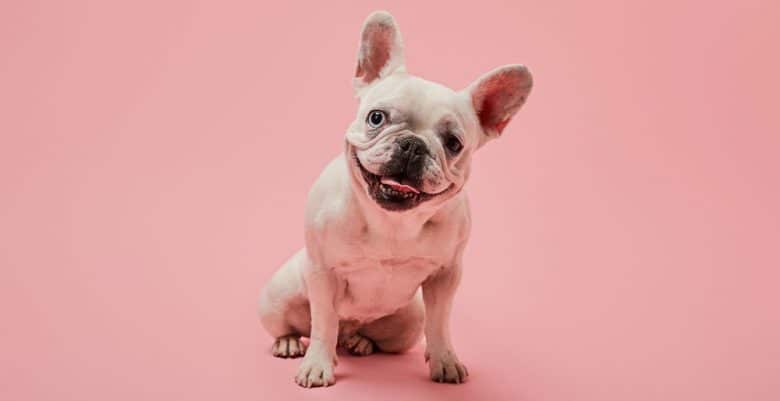 Color doesn’t affect your Frenchie’s love and devotion, but is there one you would go for?

Let us know in the comments whether you’re still keen on a Pure Black Frenchie in spite of the health risks associated with them or if you’re content with a standard Fawn Brindle & White?

Share this with your friends and help spread the word about color conformation in French Bulldogs and why it’s important.