Home » Breeds » The Lowdown on the Lab Chow Mix: What You Need to Know

Can you see the friendly and playful Labrador Retriever and the independent and aloof Chow Chow getting along as friends? Can you imagine the crossbreed of these two dogs?

It may be one of the weirdest pairings in the designer dog world, but the Lab-Chow mix definitely makes it work.

In this article, we will discuss some important facts about this crossbreed, also called the Chabrador. Here’s all the info you need to know before getting this hybrid.

What is a Lab Chow mix?

A Lab-Chow mix is the first-generation cross of a Labrador Retriever (Lab) and a Chow Chow.

Its parent breeds have been around for a long time, but this dog is relatively new to the scene.

In terms of their origin, what we know so far is that these hybrids were initially bred in the United States.

They’re quickly gaining popularity with owners because of their fluffy, adorable appearance.

If there’s one word to describe what a Lab Chow Mix is, it would be unpredictable.

The Labrador and the Chow Chow are two dissimilar breeds; in fact, they may just be the exact opposite of each other in terms of looks and temperament.

As a result, even puppies coming from the same litter may look and behave differently from one another.

Just like with any crossbreed, the best way to learn about the Chow Chow and Lab mix is through its parents.

Let’s get a better idea of where this hybrid came from by looking at the history of the Lab and the Chow Chow.

In China, these fluffy dogs have had their fair share of monikers, including hei shi-tou (“black-tongue dog”), xiang gou (“bear dog”), and Guangdong gou (“Canton dog”).

Chows are one of the oldest dog breeds in the world and are thought to be the ancestors of Spitz-type dogs.

Dogs resembling Chows were seen in Han dynasty pottery and paintings dating back to 206 BC to 22 AD. They were bred to hunt game and guard property, and, in other unfortunate times, these dogs were used for food as well.

Chow Chows were so loved and prized in China that an emperor was said to own about 5000 Chows during his reign.

In the late 18th century, British merchants brought dogs from China to Europe.

The Chow Chow got its name from a pidgin-English term the merchants used for anything coming from the East.

Labrador Retrievers have been around since the 16th century. They were originally bred as helper dogs to fishermen.

The modern Lab’s ancestors hailed from the island of Newfoundland, Canada. Labs are descended from the St. John’s water dog and were brought to Europe by British nobility.

By the 18th century, the large dogs were bred mostly for waterfowling and hunting.

In 2017, the Labrador Retriever got the top spot in the American Kennel Club’s list of the most popular dogs in the US.

Labradors are known for their intelligence, friendliness, and overall great temperament.

A quick word on designer dogs

As we said before, the Labrador-Chow mix is a new designer dog, despite the long history of its parent breeds.

It takes two purebreds to make a designer dog, which is often created to combine the best features of its parents. This is definitely the case with the Chow-Lab hybrid.

Some designer dog enthusiasts claim that these dogs are healthier because of genetic diversity.

While there have been no substantial studies to affirm this claim, these designer ‘breeds’ like the Chabrador nevertheless enjoy popularity these days because of their often adorable appearance and agreeable temperament.

Unfortunately, the AKC does not recognize these dogs as distinct breeds.

The Chow Chow Lab mix may either look like a mix of its parents or have more of the physical features of one of its parent breeds.

That’s the thing with crossbreeds; you can never predict how they’ll turn out.

Let’s check out the Labrador and the Chow Chow so we can have an idea on how this hybrid may look like.

Labs have a sweet-looking face with a kind, friendly expression. Coming in various colors such as yellow, black, and chocolate, their fur is short and thick.  Their undercoats are soft and weather-resistant to protect them from water.

They have thick and fluffy coats that may come in black, blue, cinnamon, cream, or red.

Most Chows have an aloof expression, despite their cuddly appearance. Their ears are triangular and stand upright. A unique feature of the Chow Chow is its blue or black tongue.

How big does a Chow Chow Lab Mix get?

Most Chabradors have a longer muzzle and a head similar to the Labrador. They often have brown eyes but some may have blue eyes.

Many of these hybrids have the blue-black tongue of their Chow Chow parent.

These dogs  can have coats of different colors, from black, white, and blonde, to red and brown. Their tails are often long and fluffy.

What is the personality of a Chow Lab Mix?

The temperaments of a Labrador and a Chow Chow are very different from one another, if not the exact opposite.

A Lab Chow mix can take the characteristics of either parent so you can have a Chabrador puppy who loves hugs and affection and another puppy from the same litter who is aloof and reserved.

Let’s take a quick look at the temperament of a Lab and a Chow Chow to get a better idea of the Lab Chow’s behavior.

A Labrador gets an A in the area of temperament. The AKC describes Labs as outgoing and high-spirited companions.

They are the perfect companions for running, hiking, and swimming and they have the energy and athleticism to be your workout buddy.

Labs are known for their intelligence, too, and they’re commonly used as working dogs and service dogs.

These tireless canines often carry out duties to help their owners in their daily lives.

A Chow is often described as having a dignified nature. They can be wary of strangers and might not be tolerant of other animals.

These are loyal dogs that border on being territorial. They can be aggressive if not trained or socialized at an early age.

However, even with the nature of its parents, a Lab Chow mix’s traits will depend on how much training and socialization this dog gets at an early age.

As long as it’s trained properly, you can expect your Chow Labrador cross to be a friendly, loyal dog that’s protective of its family.

How do you show love to your Lab Chow mix?

We all want our dogs to have a happy and healthy life so we have to give them a proper balance of love, care, and proper nutrition.

The Lab Chow cross requires a little more effort in terms of care, but the work is definitely worth it with these lovable crossbreeds.

Don’t be surprised if this crossbreed requires grooming at least once a week as both the Labrador and the Chow Chow have coats that need to be given attention.

If your dog inherits the Lab’s coat, a weekly brushing should be enough. However, if your pet has the Chow Chow’s thick fur, then its coat needs more attention. Consider brushing its fur at least thrice a week to keep it tangle-free.

Regular brushing also prevents the fur from developing mats, which could be painful for your pet.

This hybrid experiences seasonal shedding, but expect your dog’s fur to shed regularly as well. Have a vacuum cleaner ready for removing clumps of hair from your carpet and furniture.

What to feed these beloved canines

Labradors and Chow Chows have different needs in terms of their food consumption.

While Labs are known for their insatiable appetite and tend to eat anything given to them, Chow Chows need to be fed with a little more caution.

Most Chows have sensitive stomachs due to their history. As mentioned earlier, these dogs were considered food in ancient China so they were given the same food as other livestock animals like chickens and cattle. Chows were fed soy, rice, and, at times, fish.

As a result of this diet, these dogs became used to eating easy-to-digest food, so they may have some difficulties in digesting protein or meat. A high-protein diet can give a Chow Chow’s skin problems. 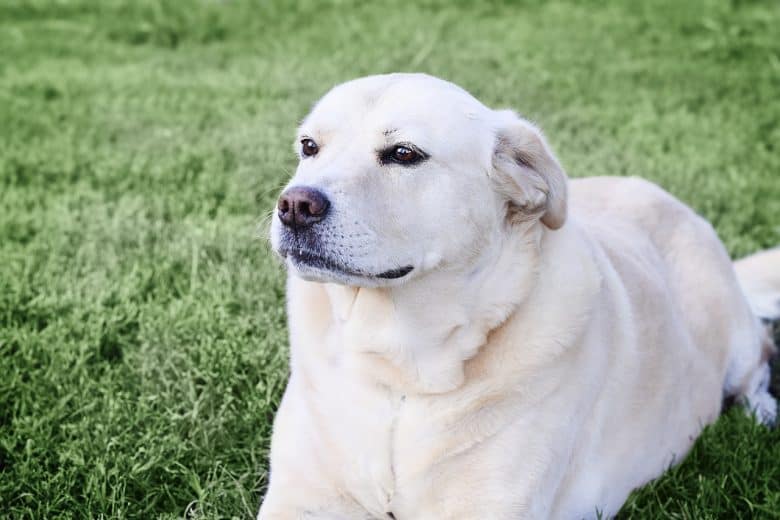 In the case of the Labrador Chow Chow mix, here are a few tips on how and what to feed them.

What are their exercise requirements?

Just how busy would you be when you decide to own a Labrador Chow Chow hybrid?

The answer is: very. Expect to spend at least an hour daily on active play with your Lab Chow mix.

They need this hour of exercise each day to remain in good physical shape.

Exercise will also help them use all their pent-up energy.

Running, playing fetch, and swimming are definitely activities your pup will enjoy.

You don’t want your dog to be bored as this may make them prone to negative behaviors such as chewing on your furniture.

So make sure you’re always ready to play with your dog to keep it physically and mentally stimulated.

This crossbreed is a fairly new designer dog and there is not much on record about their potential health issues. To get a better idea of this dog’s health, it’s helpful to look at the conditions this hybrid may inherit from its parent breeds:

With proper care and regular visits to the vet for checkups, a Chabrador has an average lifespan of 11 to 13 years.

Training this hybrid at a young age is an absolute must. Although they can be smart like their Labrador parent, they also have a high tendency to inherit the Chow Chow’s stubborn and aloof nature.

Training them when they are older is definitely not advisable. Waiting too long might bring out undesirable behavior such as aggression and hyperactivity.

An untrained Labrador Chow cross may inherit a Chow’s territorial nature and be wary of strangers and other animals that they are not familiar with. Early socialization can nip this behavior in the bud.

Expect your dog to have a moderate attention span so training has to be interesting to them at all times. Don’t let your Chow Lab Mix sway you with its puppy-dog eyes. You have to be consistent and firm yet calm so you will not encourage aggressive behavior from your dog.

Where to find your Labrador Chow mix

The first step to having a good and healthy dog is to get it from a reputable breeder.

Breeders who have Labrador Chow mix puppies for sale might be challenging to find, though.

You may check these breeders who focus on their parent breeds.

A Lab Chow mix puppy costs around $1000. This is because both parent breeds tend to be on the expensive side. The price of these puppies will also depend on their parents’ pedigree.

If you don’t mind taking home an older dog, you can also adopt from a rescue organization or a shelter.

Rescue dogs tend to come at a lower price and you’ll be able to provide a home for dog that has no place to go.

Should you get a Chabrador?

He may be unpredictable in terms of its looks and temperament, but, overall, you can expect this hybrid to be a friendly, affectionate and playful companion.

If you decide to get a Lab Chow mix, make sure that you spend enough time on training to ensure good behavior from your pet.

You also want to pay special attention to their nutritional needs and ensure they’re physically active to prevent boredom and destructive tendencies.

Do you have your own Chabrador? We’d love to hear your stories! Tell us about them in the comments.