Agile, alert and proud, the miniature German Shepherd is intelligent, loyal and bold! This fashionable and stylish breed combines all the traits you love about German Shepherds in a smaller, more manageable package. 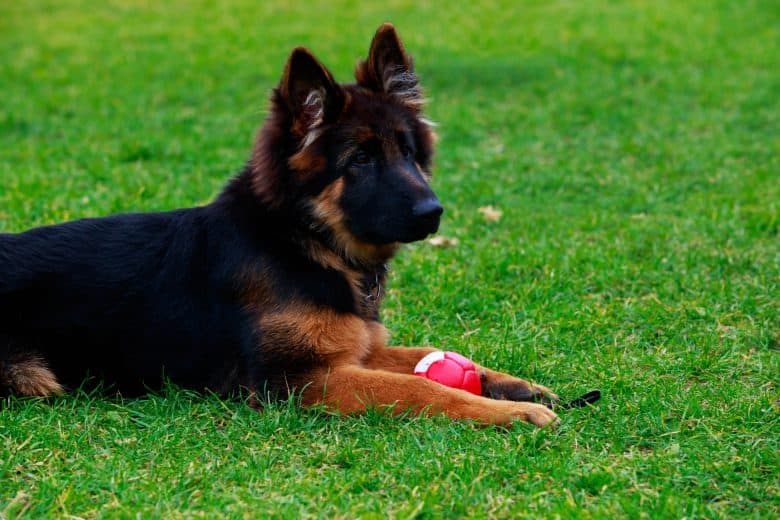 Does this sound like a little loveable bundle you would like to have in your home? Keep reading to find out more about the pros and cons of the super cute Miniature German Shepherd.

What is a Miniature German Shepherd dog?

The characteristics of the other parent typically leads to a dog that is smaller than a standard-sized German Shepherd with a slightly milder temperament.

Which led to the creation of the same working drive as the German Shepherd, but in a more compact package that is better suited to modern-day living and easier to take care of.

These dogs are often confused with other miniature shepherds and mixes, such as the Australian Shepherd and the Miniature American Shepherd.

With a large part of the Miniature German Shepherd’s personality and characteristics coming from its parent German Shepherd breed, it’s necessary to take a closer look at this breed if you want to better understand the small version.

The good-looking German Shepherd Dog (GSD) originated in Germany. Their history dates back to 1899 when Captain Max von Stephanitz bred them to work on farms, aside from military and police jobs. 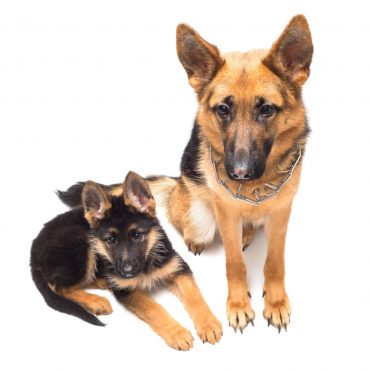 These powerful wolf-like dogs have earned a name for being a jack-of-all-trades. They excel in guarding and narcotic detection tasks. They can also be trained in search and rescue, or for assisting the disabled or the blind.

While a Mini German Shepherd will take on many of the same traits as their German Shepherd, they can also reflect some of the features of their other parent.

But generally, the small German Shepherd is likely to have the same muscular body, powerful legs, and strong broad head as the larger version of this breed.

They will also likely have brown almond-shaped eyes, as well as oversized pointy, erect ears.

Take a look at this video of a Miniature German Shepherd cuddling up to its owner on the couch:

How big do Miniature German Shepherds get?

With that said, this fido doesn’t need a large back yard and can adapt well to a wide range of environments, making it better suited to city-style living.

Dog with a magnificent double coat

Its coat can be heavily influenced by its other parent, but they typically have a thick and double-layered fur that’s medium-length.

They can be found in the standard black and tan shade of the German Shepherd, or you may even find this breed in red, black, white or silver.

This German Shepherd Chihuahua mix is one example:

Is the Miniature German Shepherd a good family dog?

Mini GSDs usually have the same temperament as a standard German Shepherd. They’re fantastic companions and excellent pets for families.

They will stand by your side and fiercely protect your family, while at the same time showing an abundance of love to your children.

Aside from being in a more adorable package and a bit more relaxed, they’re also smart and easy to train.

Especially when the hard-working German Shepherd is bred with a Border Collie or Poodle, who are known for being highly intelligent.

The clever Miniature German Shepherd also exhibits much of the same skills as their larger parent breed.

Since they have the same versatility, they’re also often used for herding purposes or can be trained for service and military work.

While they may be trainable, the MiniGerman Shepherd has a strong prey drive and will need early socialization, especially with other family pets such as cats. Failure to do so can lead to your dog hunting and chasing smaller pets at home or in the park.

It’s a good thing they respond well to positive reinforcement. They even make a great guard dog despite their size.

However, be sure not to leave your Miniature German Shepherd alone for too long as this eager-to-please breed could suffer from separation anxiety.

Owning and caring for a Mini German Shepherd

This particular breed is definitely not as high maintenance as some of the other German Shepherd crosses out there.

Their smaller size means Mini Shepherds don’t require nearly as much exercise as their full-size parents, they generally live longer and are healthier than their parent breed, and they also won’t eat you out of house and home either.

A miniature dog with a big appetite

While they may not require quite as much food as a large German Shepherd, the miniature variety is still very active and thus requires decent quality kibble that is high in protein and preferably corn-free.

These dogs will need around 1500 calories per day or about 3 cups of kibble daily. Split into two meals to properly sustain your dog’s energy levels throughout the day.

A good vitamin supplement can also be used to keep their bones and muscles strong and healthy.

As with any dog, this energetic canine requires physical and mental stimulation. They prefer to stay busy whether it’s a job, a variety of games, and skill challenges aside from the usual daily walks.

Miniature German Shepherds need about 60 minutes of exercise a day.

You may also want to consider enrolling your fur buddy in some classes or extra activities such as agility or rally tasks to help bring out their herding instincts.

Not only will this be a wonderful form of exercise for your dog, but it will also keep the Mini German Shepherd’s prey and play drives satisfied!

German Shepherds are sometimes nicknamed German shedders as they are known to leave their hair all-around your house.

Unfortunately, the Miniature German Shepherd is no different and they will likely shed throughout the year. Even more so during the shedding season, which usually occur with the changing weather and temperatures in spring and fall.

Since they’re not hypoallergenic, they’ll require regular brushing every couple days or possibly every day, depending on how much your dog sheds. Bathing is only necessary once every couple of months.

You will also need to regularly trim your Miniature German Shepherds nails and their large ears will need to be cleaned at least once a week to keep them free of any mites, waxy build-up or debris.

While Mini German Shepherds are said to have a longer life expectancy – which is 15 years – they can be susceptible to many health issues that are common with their parent breed.

One of the common ailments that plague this breed is hip dysplasia. This is a common disease for Shepherd breeds. It’s when the dog’s hip joints don’t develop properly, leading to friction between the ball and socket in the hip.

There’s also bloat that can lead to gastric torsion in the stomach and epilepsy.

How much is a Miniature German Shepherd puppy?

Considered fashionable, you can expect to pay a pretty penny for this breed. Miniature German Shepherd puppies are likely to set you back at least $950.

Adoption, on the other hand, will be cheaper than buying your dog from a breeder.

That is if you can find one of this pretty pooches at a shelter.

Rescuing a Miniature German Shepherd will likely cost in the region of $300 with the costs covering the expenses of the shelter.

A number of breeders specialise in German Shepherd crosses and typically a mixed breed Miniature German Shepherd that is from a Poodle parent will be the most expensive and more difficult to find.

Collie crosses will still be pricey, but still more affordable. Miniature German Shepherd litter usually have around six to eight puppies. But before buying one of these puppies, be sure to visit the breeder.

It’s important not only to check the living standards of the parent dogs but also to discuss the bloodlines of the parents with the breeder.

If health certificates can not be provided and if you see any evidence of hip dysplasia in the breed’s parents be sure not to buy the puppy, no matter how cute it might be!

Here are some sites to get you started on the search for the perfect Mini German Shepherd to call your own:

While Miniature GSDs may be hard to find at your local shelter, try your luck with one of the rescue organizations that specializes in German Shepherd dogs and its crossbreeds.

There are a lot of dogs looking for forever homes to help you in your search for a small German Shepherd:

Other dog breeds that look like a small German Shepherd

Curious what other German Shepherd mixes are there but also in a more compact size. Here are other canines worth checking out:.

Is the Miniature German Shepherd right for you?

A Miniature Shepherd might not occupy the same space as a standard-sized GSD, but they still require a home that provides as much love as they give you.

Their bold and loyal personality, as well as their great temperament with children, makes for a wonderful family pet.

Treat it well, and keep it physically and mentally entertained, you and your Mini German Shepherd will spend many happy years together!

What can you say about Miniature German Shepherds? If you own one, what’s your mini GSD like? Share your story by typing it all in the comment box below.