Alaskan Malamutes are gentle dogs and a common fixture in Inuit families. This breed was created to care for children and pull heavy cargo.

But it’s understandable that not one canine is suitable for everyone – due to size, coat, temperament, and care needs. The Malamute isn’t also recommended for first-time dog owners.

That’s where designer dogs – rare and popular – come in. They let you have the best of two purebreds.

A few Malamute crosses stand out from the crowd simply because they’re an overall good match and have similarities.

Does one of these hybrids seem to be your best match? 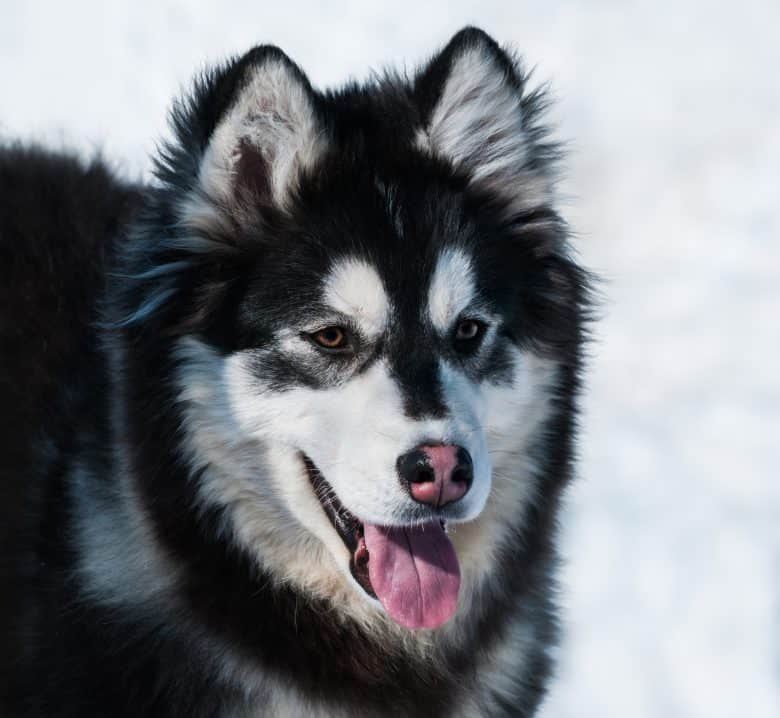 The Husky Malamute mix is one of the most popular crossbreeds. If you’re having a hard time weighing the differences between Huskies and Malamutes, this fido will put an end to that debate.

Aluskies are the perfect pet for those who want the Husky’s playful side with the Mal’s solemnity. 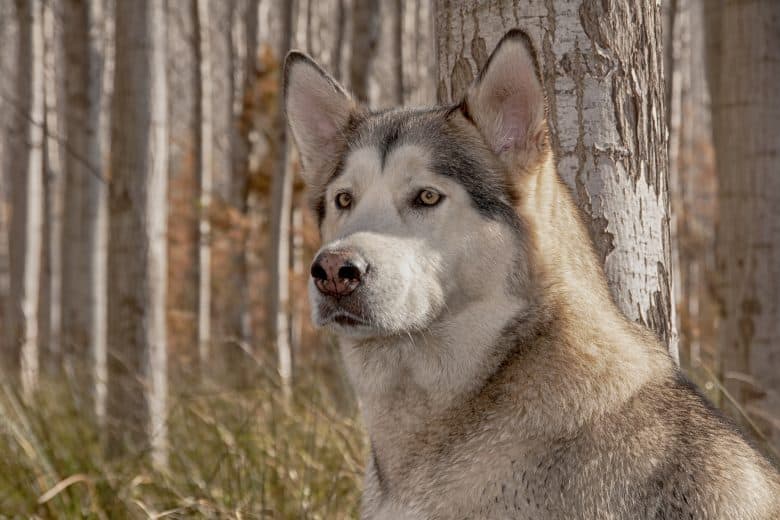 Also known as Malawolf, the Wolamute is an old designer breed with a history that can be traced back 1,000 years.

But wolf hybrids aren’t suitable housepets, especially in the city. Aside from thinking of the hybrid’s needs, some states and cities don’t allow or have specific ownership rules.

Wolamutes can be considered as a complicated canine to own because they’re quite skittish, strong-willed. 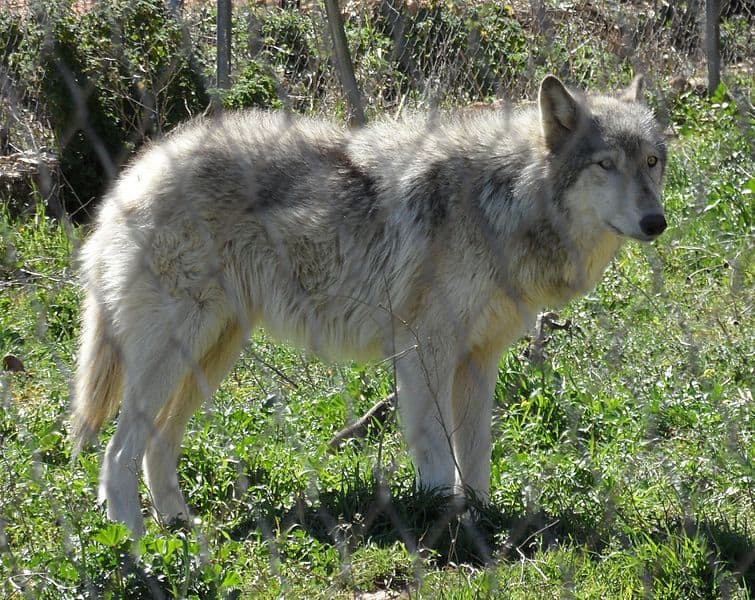 Also known as Wolfdogs, the Malamute Arctic Wolf mix has a similar temperament as the Wolamute, and some are a cross of more than two breeds.

Take Loki as an example. This Wolfdog Instagram Star is a mix of an Arctic Wolf, Siberian Husky, and Alaskan Malamute.

This breed name may sound exotic, but they’re just a cross between different dogs meant to look like wolves.

It all started in the 1980s when Edwin Harrison mixed German Shepherds, Malamutes, and Huskies to create her Utonagan canines. 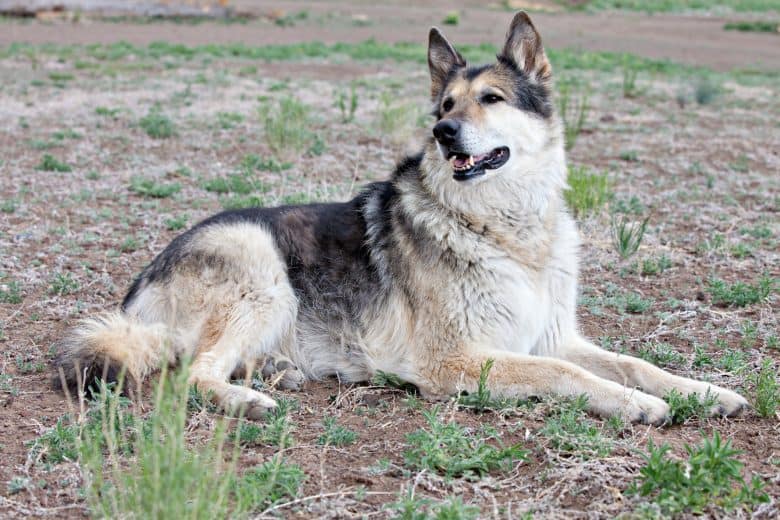 The eager-to-please attitude of the German Shepherd helped mellow out the Mal’s stubborn streak, making them a better option for first-time owners.

Another right choice for novice owners who enjoy being active is the Malamute Labrador mix. They’re a penchant for obedience and are highly energetic doggos.

Corgi Alaskan Malamute mixes are adorable fidos that can be stubborn. While they love little humans, they’ll need lots of socialization to be well-mannered.

It’s best to know that both parents are predisposed to dwarfism, which stunts growth and can cause deformities.

A medium to large breed, the Malamute Pitbull mix is an active and affectionate dog that requires ample exercise and training from an owner who knows how to be an alpha.

As a medium- to large-sized breed, they shed a fair bit, but they’re relatively low maintenance in other care needs.

Akita Malamute mixes would work better with experienced owners because of their high prey drive and stubbornness. They need a human that will assume the Alpha role consistently.

So if you want a loyal and affectionate Akitamute, proper training and socialization are required.

Since both parents have double coats and shed heavily, you should expect the same from their offspring. They also wouldn’t have a problem with the winter season.

Take a look at this Akitamute taking a stroll through the snow:

Think twice before getting a dog that’s made up of two Northern purebreds. Samoyed Malamute mixes need double the training and sheds double the amount.

Samoyeds have a puppy-like behavior combined with the Malamutes’ tireless nature that will keep your hands full.

They need a devoted owner who has a lot of time and can give this canine purpose. But if you want one for your family, staying active by giving it lots of exercise and mental stimulation will suffice.

The Mastiff Malamute mix has parents who are bred to be family companions, as well as working dogs.

This mixed breed can inherit any trait from its fluffy parents, but we can surely expect them to be intelligent and highly independent.

Territorial and overprotective behaviors are also possible. To help you deal with this hybrid’s stubbornness, take it to obedience training and agility classes.

Malamute Poodle mixes were bred in an attempt to create a hypoallergenic breed. Unfortunately, it seems that the Malamoodle’s fur, while silky, is also prone to shedding.

If it inherits the Poodle’s curly hair, you will require clipping to prevent it from getting too unruly.

Their size can vary from medium to giant, depending on which Poodle parent was bred with the Malamute.

No matter if it’s on the smaller or larger side of the scale, this crossbreed will require lots of exercise to burn off excess energy.

Malamoodles are also loving and gentle, making them a great addition to families with kids. Just make sure that interactions are supervised to avoid accidents.

Since the Great Pyrenees is a wonderful watchdog, it might be the perfect balance to the Malamute’s over-friendliness.

Properly trained Malanees dogs can be a great addition to any household with small children. They usually do better with an experienced owner because training them requires patience and determination.

Rottweiler Malamute mixes are often hard to manage because of their strong-headedness, especially since their purebred parents aren’t always the most compatible pair.

Oversized ears and a sleek coat – that’s what you should expect from the Great Dane Malamute mix.

Great Danes are very attached to their owners and are considered a moody breed. Mixing them with the exuberant Malamute creates an interesting designer pooch.

One thing’s for sure, this large dog will take up a lot of space. Due to their size, they might not be a practical addition to families with little children.

Newfies are the larger parent of the Newfoundland Malamute mix, so they’re mostly bigger than Mals.

Both purebreds have thick double coats and will require a lot of grooming, which their hybrid offspring will inherit. Coming from two powerful working dogs, your Malamute-Newfoundland cross needs constructive outlets to burn its energy.

Also called Pomermute, the Malamute Pomeranian mix is a small- to medium-sized fido with a big personality.

They’re usually a mix of loyalty and friendliness, and thanks to their compact size, they make an excellent companion for children.

Like many Malamute crosses, you’ll have to groom this doggo often to keep shedding under control.

Border Collies are known for their intelligence and highly trainability. So the Malamute Collie mix will try to outsmart its owner and herd kids.

But they aren’t always naughty. They’re affectionate canines that don’t like being left alone.

The Australian Shepherd Malamute mix has unique coloring. Since merle is a dominant color, you can expect your cross to inherit it, along with mesmerizing blue eyes.

Like any mixed breed with working dog parents, this fido will love a good challenge and being on the move. If you’re looking for a good watchdog, then you should consider Aussie Shepherd Malamutes.

The St. Bernard Malamute mix might be challenging to train, so they’re better off with experienced owners who can give them lots of time and attention.

This crossbreed can have a high prey drive, making early socialization more vital to avoid undesirable behaviors like chasing.

Some of the great things about Malberns are being healthier than the St. Bernard, and they’re less likely to slobber.

Even though there are different kinds of Foxhound, the most common is the American Foxhound.

But Malamute Foxhound mixes can be made up of any of them, but it is believed that the English Foxhound is often used to produce this breed.

They’re usually smooth-coated, making them low maintenance. And they’re typically medium- to large-sized, depending on the parent’s height and weight.

Mally Foxhounds are hunting companions and are adept at tracking. They may be great with kids, but not so much with smaller pets.

If high-strung pets are your thing, then the Border Terrier Malamute mix should be on your list of hybrids to consider.

Bred as companions, this crossbreed is affectionate, friendly, and playful. They may be excellent for families with little ones, but in a single-pet household only.

Where to Get Your Dream Malamute Mix?

If you want a Malamute mix puppy, then you can opt to buy one from a breeder. If you prefer to adopt an older dog, many rescue sites care for purebred Alaskan Malamutes and their crosses.

When buying your pet from a breeder, always remember to do your research, including visiting the kennel and meeting the pup’s parents and littermates.

When looking for a designer dog, stay away from places that sellmany different breeds. A reputable breeder will focus on their breeding stock and pups’ welfare instead of making a profit.

The price of each pup from responsible breeders are usually steeper. It will cover the costs to ensure that their dogs and their puppies are healthy and prepared to go home with their new owners. Most of them even provide contracts.

But since most breeders who offer Alaskan Malamutes have more purebreds, so your best bet in finding the Malamute mix you want are these websites and shelters:

Should You Get a Malamute Mix?

Most Malamute mixed breeds are suitable for families, but each one has specific needs from their humans and care requirements.

Some even thrive from undivided attention. That means they’ll be much happier being the only pet in the house and your eyes.

Aside from being part of the pack, they do well when they’re busy, whether it’s a job or simply being active.

If a needy dog isn’t an issue, then one of these Malamute mixes is perfect for you. Which one do you think is best for your lifestyle? Please share it with us by leaving a comment!