The northern sections of the Netherlands have historically been rather isolated. As a result, the people of these regions have developed their own unique dialects, customs, and even their own native dog breeds. One of the most striking examples of the latter is the Wetterhoun (pronounced VETTERHOWN), a distinctive, curly-haired dog native to the Dutch province of Friesland.

Originally used to hunt otters and polecats, it is known by a variety of names including the Otterhoun, the Dutch Spaniel, and the Dutch Water Spaniel. It is among the Fresian breeds recognized by the Dutch Kennel Club in 1942. 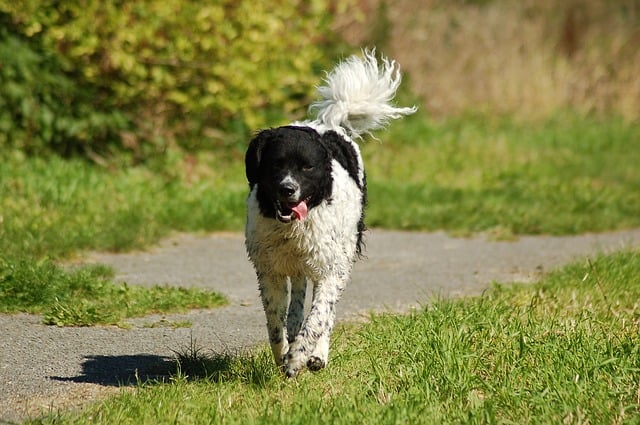 As with most dog breeds, the Wetterhoun’s precise origin is in dispute. Spaniel-like dogs have been a part of Friesland’s rural history for as long as people can remember. However, there is no historical data indicating that curly-haired dogs of Wetterhoun type existed in Holland earlier than the 19th century.

It is therefore believed that the Wetterhoun is a breed of fairly recent origin, possibly arising from crosses between the native Fresian farm dogs and dogs of water spaniel and/or spitz ancestry. This latter component may have been imported from Russia, Greenland, or any of the neighboring Baltic countries with whom the Fresians had a significant trade relationship in centuries past.

Around the time of the Second World War, Dutch dog fanciers took it upon themselves to recognize, preserve, and promote the Wetterhoun as a distinct breed. Among these fanciers was a man by the name of Jan Bos, who led the efforts to identify and register a group of Wetterhounen that conformed to a loose standard of type.

Bos reportedly approached a number of owners and breeders whose dogs met his ideal image of a Wetterhoun and persuaded these people to bring their dogs to the first “inspection days” which were held in the town of Leeuwarden.

Dogs with suitable conformation were then put through a hunting test which measured their abilities to dig for vermin, to retrieve from water, and to track an animal on land. Names of acceptable specimens were then entered into an appendix of the Dutch Pedigree Register.

Inspections and hunt tests were held periodically in and outside of Friesland up until the early 1960s, allowing several dozen Wetterhounen to be registered. At that point, the appendix was closed to further entries, and these initial dogs became the standard group from which all future purebreds were derived.

In an effort to gain exposure for their breed, members of the newly-formed breed club took their Wetterhounen on the road, attending dog shows in Rotterdam and Amsterdam. To highlight the breed’s regional development, these enthusiasts rented traditional Fresian costumes and horse-drawn Fresian buggies.

Their appearance earned them headlines in major metropolitan newspapers, and from that point on, the Wetterhoun and its Fresian heritage became increasingly well-known to dog fanciers throughout the world.

Early Wetterhounen varied greatly in appearance. Colors included black and white, white, grey, dogs with red patches, and even black and tan. There was also a great diversity of coat texture ranging from tighly curled to loosely curled to completely flat.

Despite the devisive opinions of various enthusiasts as to what the “ideal” Wetterhoun should look like, the breed club adopted a written breed standard, which has helped to bring increased uniformity to the Wetterhoun in recent years.

Although no longer restricted solely to Friesland, the Wetterhoun nonetheless remains a rare breed, rarely seen outside of Holland. It is not a popular hunting companion, although a few have excelled in hunt tests and have earned diplomas from the Royal Dutch Hunters Association.

The dogs currently compete in Holland’s “B” classification of spaniels, alongside other dogs of similar type, such as the Irish Water Spaniel. A few others compete in bench competitions, but the breed is still primarily known as a “yard dog”—keeping the Fresian farm buildings free from polecats, and the farm fields free from moles. It is most common in the water-laced southcentral and southwestern sections of Friesland.

Historical information perhaps incorrectly refers to the Wetterhoun as “fierce”. This may be in part due to the rather intimidating “snarling” expression of the dog. The true personality of the Wetterhoun is that of a gentle but independent dog that is reserved with strangers.

Many people describe the dog as being stoic and brave. Long-time breed fancier J.P. Otto recalls watching a Wetterhoun “stare down” a stray German Shepherd that once dominated and attacked all the local dogs in the town. Otto feels that this stoicism and tenacity is what gives the Wetterhoun its name—he insists that “Wetterhoun” is not a literal translation of “water hound”, but instead comes from the German hunter’s phrase wittern, meaning, “to steal his last breath”.

The Wetterhoun is a natural retriever of both fur and feather. It takes to the water well, has a strong prey drive, and its dense, oily, water-repellent coat makes it especially suited to working in rough terrain or climates. Its hunting desire is hard to satiate, and when thwarted in the duck blind, it will turn to stalking mice.

It has an excellent nose and its used a flusher in the uplands. However, the breed is often not a consistent performer, and it usually considered too stubborn to be taught advanced retrieving skills.

The personality of the Wetterhoun is truly unique. Its hunting instincts and reserved nature have led to comparisons with sporting dogs such as the Chesapeake Bay Retriever, Curly Coated Retriever, and the American Water Spaniel, or to earth dogs such as the Fox or Jack Russell Terrier.

It is not easy to gain dominance over a Wetterhoun; owners must first build a good rapport with the dog. Training should begin early and should be carried on throughout much of the dog’s adult life. Patience is essential; too much haste or overwork will produce the wrong results. A Wetterhoun is quickly influenced and any undesirable handling will be remembered for a long time.

Because of its dominant nature and prey instinct, the Wetterhoun may not be the best choice for homes with other pets, unless introduced to them at an early age. Former Fresian horticulturalist Frans Haven often had problems with stray cats—which had a habit of making litter boxes out of the bedding areas in his nursery. On more than one occasion, Haven’s Wetterhouns made short order out of a few of these night-time visitors.

The Wetterhoun is generally not susceptible to the range of diseases that afflict more popular, widely-bred dogs. However, the initial gene pool of registered Wetterhounen was very small, and epilepsy and canine hip dysplasia are now prevalent. In light of these problems, efforts have been made in recent years to reopen the registry in order to bring in “fresh blood” to enhance the genetic qualities of the breed.

Wetterhounen occasionally suffers from hair loss. A few dogs have apparently been treated successfully with vitamin therapy, but other cases suggest an autoimmune disorder similar to that which occasionally surfaces in other curly-haired breeds.

NATURE: A gentle but stubborn dog. Reserved with strangers. A good watch dog.

HEAD: Large in relation to the body, strong and powerful. Skull and snout equally long. The skull is slightly curved appearing to be more broad than long, rounder over the cheeks with reasonably well-developed cheek muscles. Moderately defined stop. The snout is strong being only a little narrower than the nose with little inclination toward snippiness.

The bridge of the nose, seen from the side, doesn’t appear round or hollow. The bridge is broad and the nose well developed with open nostrils. The lips are well closed and not overhanging. Strong, sharp teeth.

EARS: Starting low, the ear is not strongly developed. It is desirable for the ear to hang without touching the head. The ears are of average length and trowel shaped. The hair on the ear is curled, long at the base becoming shorter as it goes down to the tip of the ear.

EYES: Medium size, egg-shaped with good eyelids without sight of the conjunctiva. They sit back on the head giving a fierce impression but should not be sunken or bulging.

NOSE: Black for dogs with a black base color and brown for those with a brown base color. Not split. Good open nostrils and well-developed surface.

NECK: Short and strong, round with blunt corners running into the line of the back so the head is carried a little low. Slightly curved without hang or bulge.

CHEST: Seen from the front, broad, more broad than deep and consequently the front legs are far apart. Rounder under chest reaching only as far as the elbows.

TAIL: Long and rolled to a spiral.

HAIR: Except for the head and legs, covered with thick curls. Strong and tufty curls. Multiple curls or curls in thin tufts giving a woolly appearance are incorrect for the breed. The hair is quite coarse and feels greasy. The hair on the head tends to be a little less greasy.

COLOR: Brown, black, or either color mixed with white.