Home » Breeds » The Ultimate Guide to the White German Shepherd

The White German Shepherd is one of the most striking dogs I have ever come across. Their thick white coats definitely make them stand out from other German Shepherds (GSDs).

Don’t be confused, though. This distinct-looking dog is simply a German Shepherd with an all-white coat. They’re not a separate breed from the GSD.

Want to know what a White German Shepherd is like? Keep reading to find out more!

The White German Shepherd was an important European farm animal because of its obedience and loyalty and its excellence as a herding dog.

Most early herdsmen preferred these canines because their pristine white coats blended into flocks of sheep and livestock, making it easier to spot black wolves among the flock.

Horand had a maternal grandfather named Greif von Sparwasser, a white-coated German Shepherd. Greif’s white fur is caused by a recessive gene that has always been present in the genetic pool of all German Shepherds.

White GSDs today come from a line of white-coat German Shepherds that were initially from Europe and were later brought to Canada and the US. These dogs eventually spread out through the rest of the world.

During the 1930s, only GSDs in the classic tan-and-black coloring was accepted for registration by the German Shepherd Dog Club of Germany.

This disqualification of white German Shepherds continued even after the end of the Second World War.

The discrimination against these Shepherds even extended to the GSD Club of America.

These lovely White Shepherds were barred from joining in conformation shows in 1968 by the American Kennel Club. They still, however, got the chance to compete in other events.

The White German Shepherd Club of America was formed in 1969 and were allowed to join the conformation shows by the Canadian Kennel Club (CKC).

However, these canines were again barred from joining conformation events by the CKC in 1998.

The White German Shepherd is a large dog with a muscular body that hints at its strength.

Aside from this all-white version and the all-black German Shepherd, most of these GSDs share the same facial features as tan-and-black German Shepherds. They have black noses, medium, almond-shaped, brown eyes, with black eye rims and lips. They also have large, upright ears that are triangular.

Of course, this unique German Shepherd has a pure white or cream-colored coat. This coat is weather-resistant and double-layered.

The topcoat layer is straight, harsh to the touch, and dense, while the thick undercoat has short hair that’s softer to the touch.

How big does a White German Shepherd get?

Check out this video to get a better idea of how big the white GSD can get:

Most white GSDs have a calm disposition, but they will react instantly when the situation calls for it. These canines are not the aggressive type and are usually aloof and observant around strangers.

The ideal guard dogs, white German Shepherds tend to be protective of children in its human pack. They won’t hesitate to risk life and limb to protect their owners.

Does this dog bark a lot?

German Shepherds are quite vocal, so don’t expect a quiet household with these dogs around.

They have a tendency to moan, whine, and groan in response to various factors in their surroundings. Many White GSDs also like to howl, a habit you can curb through consistent training while it’s a puppy.

How much exercise does the White German Shepherd need?

The White German Shepherd, like its standard-colored cousin, is a highly active dog.

He needs at least an hour of brisk activity daily, whether it’s a long-distance run with you or off-leash playtime in the dog park.

Try to walk your white GSD for at least 8 miles a week to burn through his energy and keep him in tip-top shape. A run on the treadmill on days when the weather is not good is an ideal way to keep him busy.

The white-coat German Shepherd will excel in canine sports and activities such as agility and flyball. He will also enjoy the physical and mental challenge of obedience and herding trials and protection training.

How to train the White German Shepherd 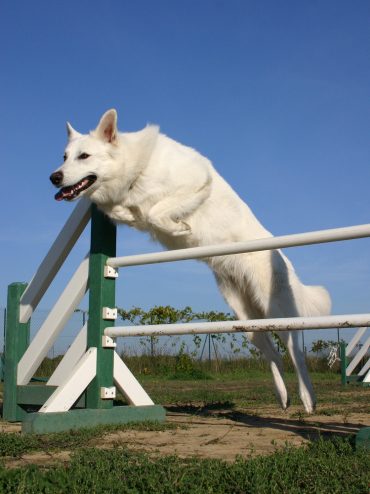 Training not only helps your pup learn proper behavior but is also one of the best ways to reinforce the bond between you and your dog.

Ranked as the 3rd smartest breed in the world, GSDs are some of the most trainable dogs today.

Socialization should be a priority when it comes to the White Shepherd. Though these dogs aren’t aggressive, they can be wary and defensive around strange people and other animals.

Bring your dog to new places and introduce him to new people and pets while he’s still young, so he doesn’t become stressed in unfamiliar situations.

Aside from socialization, you should focus on the following aspects of training your White GSD:

Training sessions should be kept short but stimulating to keep your White Shepherd motivated.

Being consistent with your training and using positive reinforcement – like giving praise and rewards for good behavior – will always yield the best results when training your White German Shepherd puppy.

You can also opt to find a local trainer to help you in correcting your puppy’s behavior. Local pet stores usually have listings for basic training classes and puppy socialization classes.

These classes also provide the perfect opportunity for your puppy to play with other dogs and meet other people.

Most German Shepherds have thick, dense fur that needs to be groomed regularly. Thoroughly brush your white GSD’s coat at least once a day to keep it smooth and tangle-free.

Since White German Shepherds are heavy shedders, regular brushing will also help remove dead hair from its coat and keep shedding under control. (Unfortunately, the white GSD is not a hypoallergenic dog.)

Bathe your dog at least once every month or on an as-needed basis. Use a gentle shampoo to keep your dog’s skin from becoming dry. Consult your vet if you want to bathe your dog more than once a month.

Your White Shepherd’s teeth should be brushed daily to ensure proper dental hygiene. His nails should be inspected and trimmed once a month. Bring the clippers out once you hear your puppy’s nails scraping the floor.

A White Shepherd’s ears need to be thoroughly inspected for any discharge or inflammation and then cleaned once weekly. 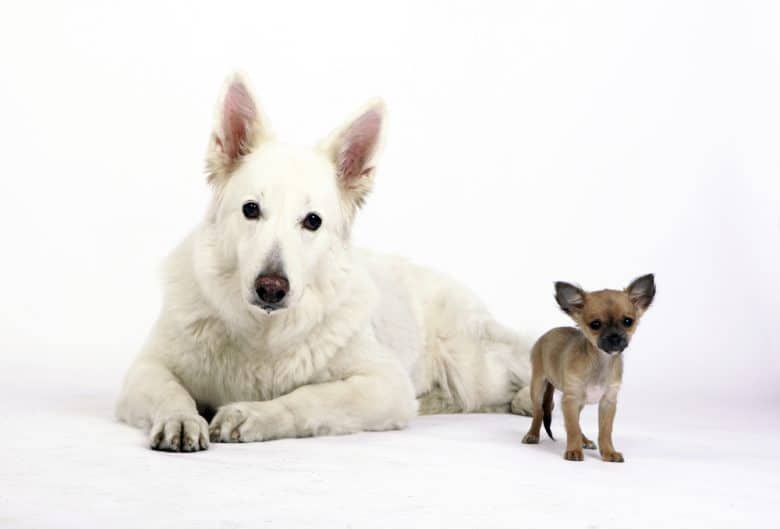 What health issues can the White GSD have?

The white GSD is prone to the same health problems as other German Shepherds. Crippling joint diseases like hip dysplasia are prevalent in these dogs; in fact, nearly 20% of evaluated GSDs suffer from this joint condition.

Here are other health issues commonly seen in this breed:

The average lifespan of a White Shepherd is around 12 to 14 years. You can help your dog live to a ripe old age by giving him enough exercise and a proper diet and taking him to the vet for regular checkups.

One of the critical factors in maintaining your White Shepherd puppy’s health is making sure he gets his shots. Canine vaccinations are essential in protecting your puppy from lethal and contagious diseases.

When taking your puppy to a vet for the first time, it is best to have an idea of the vaccination schedule that your dog must follow.

Here is a list of the standard vaccinations a White Shepherd puppy should undergo: 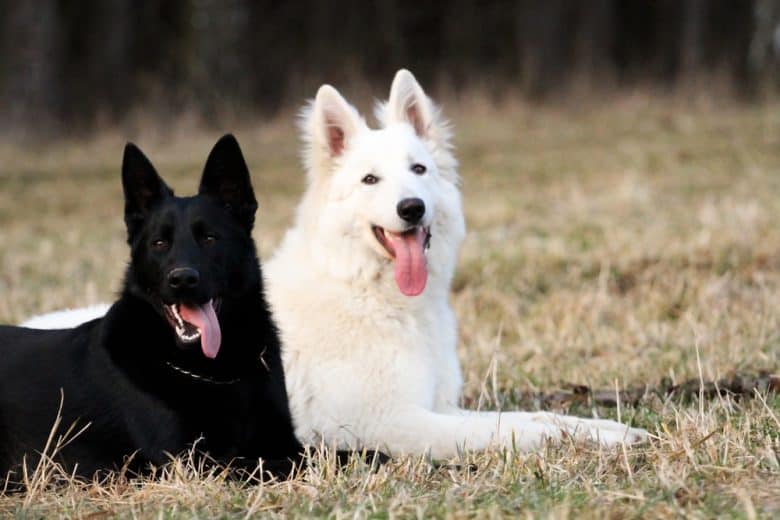 Consulting your vet for advice will help you in making the right decision for your pet, especially if you feel overwhelmed with the information you’re getting.

How much and what should a White German Shepherd eat?

Most adult German Shepherds need as many as 2200 calories daily to fuel their energy levels. You can feed your White German Shepherd 3 to 5 cups of high-quality dog food per day so he gets all the nutrients he needs.

Make sure to divide this amount of food into 3 to 4 portions and to space feedings throughout the day. Giving your dog smaller, more frequent meals, along with avoiding vigorous activity after mealtime, helps reduce the risk of bloat.

Like most large dogs, the White German Shepherd needs a diet that’s rich in protein and fat, with a moderate amount of carbohydrates.

Protein is essential in keeping the white GSD’s bones and joints strong, while fat and carbohydrates provide your dog with energy.

Adding small quantities of nutritious food such as cooked vegetables, eggs and yogurt to your puppy’s diet can also be beneficial. Table scraps should be given sparingly since these can give your dog an upset stomach.

How much will it cost to own a White German Shepherd?

Breeders may charge anywhere from $700 to $1500 for each White Shepherd puppy. Of course, the expense doesn’t stop there.

Initial costs for accessories and neutering would be around $400 to $500. Annual medical expenses are may reach up to $600, while yearly non-medical costs like training, food, professional grooming can be as high as $1000.

Rescuing or adopting a white GSD is a more affordable option, with adoption fees ranging from $175 to $200.

Is this Shepherd the right dog for you?

A White German Shepherd is a loyal and affectionate dog who loves the outdoors and spending time with its family. You will be won over by the charms of this sweet ball of fur.

The White German Shepherd is the perfect pet for you if you lead an active lifestyle, especially since this dog has high energy levels. It’s not the best pal for couch potatoes, but the playful GSD will fit right in with families with children of all ages.

The right owner for the White GSD also has plenty of time and energy to devote to training and exercise, as it may need intensive training and daily physical activity.

Despite his friendly nature, this may not be the ideal dog for owners who’ve had no experience handling large, independent-minded breeds. This Shepherd is not a good match for people who have allergies to dander, either.

Comment down below if you have stories about this gorgeous dog!