Just like people, dogs are prone to quite a few hereditary illnesses. Many of these conditions are most common in specific breeds as they’re passed along through their bloodline.

Did you know that purebred dogs tend to get these diseases more than mixed-breed dogs? 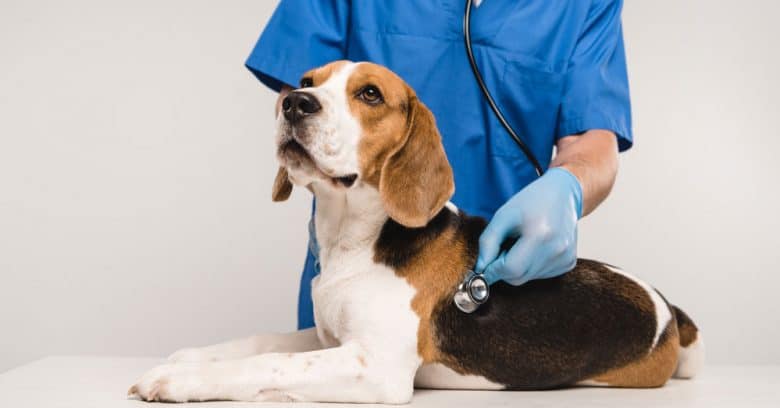 In this article, we’ll take a look at why that is and some of the most common genetic disorders in dogs, and which breeds are most affected by these. Stay with us and keep scrolling.

How are the majority of genetic diseases in dogs inherited?

Genetic diseases can be inherited in various ways depending on the illness, and they can either be dominant or recessive.

If a gene is dominant, any dog that inherits that gene will likely develop the disease. That means only one parent has to be affected.

On the other hand, an autosomal recessive genetic disease requires both parts to be carriers of the disease. This sort of genetic disorder can hide in the genome before showing up in a puppy.

For this reason, they’re much harder to detect and prevent unless parents undergo specific chromosome testing.

In general, it’s in the dog owner’s best interest to ask about genetic testing whenever they’re adopting any purebred dog.

Many dogs with similar genomic similarities have a higher prevalence based on sharing alleles.

A list of the Most Common Genetic Disorders in Dogs

Let’s take a look at the transmission and inheritance of each common genetic disorder.

Hip Dysplasia and Elbow Dysplasia are common skeletal conditions where the ball and socket of the hips or elbows do not line up correctly, causing them to rub together and wear down over time and creating pain.

These can affect all breeds, but the most affected dogs are large and giant breeds like Mastiffs, Bernese Mountain Dogs, Great Danes, Newfoundlands, and Rottweilers.

This inherited disorder may have a genetic component, but other factors can speed up and magnify this genetic susceptibility, such as unhealthy weight, improper exercise, and excessive growth rate.

Surgical and medical treatments are given to canines suffering from this disorder.

Depending on the severity, a dog with hip dysplasia can take products with chondroitin and glucosamine or pain medications, get cold laser treatments, physical therapy, stem cell therapy, or total hip replacement.

If you’ve heard the term ACL, dogs have a similar problem where they have ruptured or torn CCL (Cranial Cruciate Ligament) that causes lameness or inability to put weight on the injured leg.

Some eventually injure the other leg, as well.

This genetic condition can also be caused by environmental factors, like getting a knee injury when young dogs play rough. It can also be due to old age or obesity.

Few breeds with a genetic predisposition of Cranial Cruciate Ligament injuries include Newfoundlands and Labrador Retrievers.

And depending on the damage, veterinarians can look for drawer signs to try to fix the problem, but that doesn’t mean the CCL isn’t damaged.

Other non-surgical treatments are only applicable if the dog weighs less than 30 pounds (14 kg). Degeneration of the knee joint can occur without surgery.

Brachycephalic Syndrome is common in dogs who have a smushed face or are short-headed. Breeds affected by this are quite common and unbelievably cute, like the Shih Tzu, Pug, Boston Terrier, and French Bulldog.

Owners and dog lovers of these breeds may be used to their snorting and snoring sounds. Some even adore it!

But the structural abnormalities can cause various health issues other than breathing problems that can lead to heat stroke.

They’re also predisposed to dental, skin, and eye problems. So if you own one of these short-snouted doggos, you’re aware that they require extensive maintenance.

Referred to as DM, Degenerative Myelopathy is a slow-progressing neurological disease that happens due to the deterioration of the myelin sheath and nerve fibers in the spinal cord.

It usually affects senior dogs who are 8 years of age or older.

Though there’s no cure, affected dogs don’t experience any pain, but it takes a psychological toll on pet parents and their fur babies. They would need to use a cart or harness to help them move around.

It’s relatively challenging to prevent the incidence of this disease, and the tests for this gene are not widely available and usually not used before breeding dogs.

German Shepherd Dogs (GSD) is one of the breeds that commonly suffer from DM, but other canines like Kerry Blue Terriers, Pembroke and Cardigan Welsh Corgis, and Boxers are also at risk.

You should know that heart diseases have a high prevalence among all breeds, even mixed-breed dogs.

And different cardiac problems can affect certain breeds, like how Newfoundlands, Golden Retrievers, and Rottweilers may get subvalvular aortic stenosis. But there’s more.

Doberman Pinschers and Irish Setters are some of the dogs that are genetically predisposed to Dilated Cardiomyopathy (DCM).

Affected dogs have an abnormal heart musculature that leads to a dilated and weakened heart.

Bulldogs and Boxers can suffer from ARVS or Arrhythmogenic Right Ventricular Cardiomyopathy. The heart muscles develop fibrous or fatty tissue that replaces its normal cells.

It causes irregular heartbeats or arrhythmias and problems with the electrical conduction system of the heart.

Some would faint, but others can have heart failure and sudden death.

Once you see symptoms like difficulty breathing, abdominal distention, poor appetite, coughing, or collapse, bring your pooch to the vet for treatment or medications.

Dachshunds and Cavalier King Charles Spaniel are susceptible to myxomatous valve disease, which pressures the heart’s chambers and can lead to heart failure.

Currently, there are no drugs to reverse or slow the progression of this disease. Instead, medication is used to help the heart work more effectively and slow the damage done to the rest of the body.

Dietary modification may be required, as well.

Chondrodystrophy and Chondrodysplasia are inherited bone disorders of short breeds like Basset Hounds.

It’s associated with a mutation in the ITGA10 gene and affects how certain proteins are formed, which also affects the formation of cartilage.

This is a recessive gene, so it can hide and be passed down before finally becoming evident. Furthermore, carriers are entirely asymptomatic, so there’s no way to know they are affected unless they are genetically tested.

Bladder stones are large or small rock-like formations of minerals that develop in the bladder.

There are quite a few theories on how these stones form, like how dietary factors are involved, but it may also be linked to genetics.

Some of the breeds predisposed to the formation of bladder stones are Miniature Schnauzers, Bichon Frise, and Dalmatians.

Many breeds suffer from the many forms of this neurologic illness that can be traced to a genetic basis.

And since there are currently no available tests to diagnose it beforehand, vets would have to rule out non-hereditary seizures while diagnosing it on a dog.

Epileptic seizures can happen to newborn pups, those still in puppyhood, or adults, but most canines experience their first episode after turning 1 year old.

Some can get recurring seizures while others would only have one or two episodes, then never again. There are also dogs who get status epilepticus or cluster seizure, while others only get a single attack at a time.

Epilepsy that’s inherited can be grand-mal (generalized) or petit-mal (localized) that can cause tics, fly-biting, or only staring.

Dogs with epilepsy that runs in their family have similar types of seizures, progression, and even response to anticonvulsant medications. All these things that you observe are called the phenotype.

Experts believe that a breed with similar phenotypes got this disease because of the same genetic cause.

Those with different phenotypes may represent distinct genetic causes or other modifying factors that are unknown, like environmental.

There’s a study on Belgian Tervurens suggesting that even inheriting a simple Mendelian single-gene is unlikely.

There’s one major epilepsy susceptibility gene working in the breed. It seems to them that crossbreeding epileptic dogs suggests complex or dominant modes of inheritance are a possibility.

Some breeds are particularly prone to epilepsy, including Beagles, German Shepherds, and Dachshunds.

There are some treatments for epilepsy that can vary quite a bit from dog to dog. There are medications available too, but what works for one canine may not necessarily work for another.

Inherited atopic disease is caused by allergies, usually airborne substances or food. Dogs are often allergic to specific types of protein, usually after they have been exposed to them over and over again.

Dalmatians and West Highland White Terriers are some of the breeds prone to this sort of skin problem.

Canines that have little pigment are prone to deafness. It can be acquired or inherited, but it’s believed to be associated with their coat color, and there are different causes of dogs getting hearing problems.

These reactions typically pop up as rubbing, licking, biting, and scratching. With enough scratching and rubbing, secondary infections can develop, which can be quite severe.

Though there’s no DNA test for this condition, it’s treatable with medication and avoidance of the allergen.

Many eye conditions are inherited as well, like lens luxation.

Progressive Retinal Atrophy is actually a group of degenerative illnesses that affect photoreceptors, the cells that convert light into signals and send it to the brain, giving us our night and color vision.

And the word “atrophy” means complete or partial deterioration, which in this case, can lead to blindness.

It’s a disease that’s been around for so long that it affects many breeds like Labrador Retrievers and American Eskimo Dogs.

There are also breed-specific eye problems, like Iris Hypoplasia and Coloboma. Collies, Dachshunds, and Corgis are some of the canines that are at risk of getting it.

As pet parents, we can never be too careful when it comes to our fur babies. So it’s best if we know a few more of these genetic disorders in dogs:

Commonly known as “fainting goats,” this condition is relatively rare. It makes our pets faint or stiff-legged as forceful and sudden contractions cause delayed relaxation.

Some of the breeds that are predisposed to this are Jack Russell Terriers and Australian Cattle Dogs.

This inherited disorder caused by autoimmune thyroiditis is where autoantibodies destroy the thyroid gland. It’s prevalent in purebred dogs like the Old English Sheepdog, Bull Terrier, and English Setter.

Simply known as bloat, this condition is NOT inherited, but dogs at risk of it have the genetic predisposition for it, like Standard Poodles and Bloodhounds.

The best selective tool for this is said to be the chest-width to chest-depth ratio. It can affect their personality, eating habits, and weight.

Should Genetic Disorders in Dogs discourage us?

While other genetic conditions can’t be caught beforehand, few tests can detect some of them. Overall, pet parents can help their fidos deal with health problems.

Still, it’s best to support responsible breeders who ensure that their breeding stock undergoes DNA testing, just like what legitimate organizations require, such as the American Kennel Club (AKC).

Keep in mind that environmental issues also contribute to many of these illnesses, so canine genetics isn’t necessarily fate.

Do you have a canine who suffers from an inherited illness? Let us know how you deal with it to help further encourage and make fellow dog owners better understand genetic disorders in dogs. Just leave a comment below.