Bloodhounds are an ancient breed, and their origins are unclear. However, in the 7th century, St. Hubert (patron saint of the hunter) and his monks had an extensive hand in developing the breed.

Bloodhounds today are still registered with FCI as chiens du St. Hubert. The name “Bloodhound” is derived from the term “blooded hound,” meaning a hound of pure breeding.

Bloodhounds are extensively associated with royalty: William the Conquerer arrived in England with several bloodhounds. Bloodhounds were often given as gifts among royalty and nobility.

For almost seven hundred years, the St. Hubert Monastery sent a pair of black and tan Bloodhounds to the King of France each year. These hounds and the white Talbot hounds are considered the ancestors of modern-day Bloodhounds.

The former died out by the French Revolution after their popularity plummeted when Charles IX favored the white hounds. Modern Bloodhounds are descended from the hounds that William the Conqueror brought to Britain.

It was not until about the 16th century that the Bloodhound was used to track man. They were regarded as large game hunters before then: deer, etc. Their testimony was so highly regarded that they had the legal right to follow a trail anywhere, including into homes.

As the need grew for smaller, faster hound dogs, the Bloodhound was crossed with a variety of breeds to produce Harriers, Beagles, and others, all of which owe their nose to the Bloodhounds. The use of Bloodhounds declined due to increasing population and decreasing game area in Britain until there were very few lefts.

The introduction of dog shows in 1859 revitalized the breed. More companionable animals, suitable for showing, resulted.

In 1898, Bloodhound breeders began to promote man hunting trials as a sport. The only animals available for this were those who had been bred for show and companion for many years; yet their noses were as keen as ever.

Foxhounds have been crossbred into Bloodhounds several times, especially after WWII, when the stock was severely depleted in Britain. This ancestry sometimes shows up as white markings on Bloodhounds although the markings may also be throwbacks to the white Talbot Hounds.

Such markings do not disqualify from showing so long as they are confined to the chest, toes, and base of the tail.

Contrary to popular wisdom, Bloodhounds were not actually used to trail runaway slaves in the US. Those dogs were usually mongrel crosses and of vicious temperament, which the Bloodhound does not possess. Stowe’s Uncle Tom’s Cabin, the book, and the movie, in particular, gives an exceedingly inaccurate depiction of Bloodhounds.

Mantrailing has enjoyed a steady, although by no means explosive, increase in modern day law enforcement and search and rescue. Trails performed by Bloodhounds are permissible evidence in court.

Bloodhounds are not for everyone. Due to generous flews, they can fling saliva 20 feet with one shake of their head. Their enormous size, food requirements, vet bills, and inherently short lifespan make them dubious companions for the average dog-lover.

As a puppy, the Bloodhound will grow four to seven pounds and one-half to one inch in height per week. As is common with large dogs, they have a short lifespan of about 10 years.

Bloodhounds are friendly, often very good with children. When they find someone at the end of the trail, they are likely to lunge at them — to plant wet slobbery kisses (their specialty) all over them.

Criminals often turn themselves in on the spot rather than face Bloodhounds, whether to escape the kisses or in the mistaken belief of their ferocity is sometimes hard to tell!

Bloodhounds are very determined. They are aggressive in the sense that they will want to finish trails, and that they can be hard to call off once on a track. They can be difficult to train off-leash for this reason. However, they are not generally aggressive toward other dogs or people.

The pendulous skin over their ears and eyes will fall down over their eyes when they lower their head to a trail, effectively blinding them. Because of this and their determination, Bloodhounds are usually run on a leash for their own safety.

Bloodhounds can make an amazing variety of sounds. They can bay expressively, howl and whine, all in melodious tones. The neighbors may not appreciate this, however.

Bloodhounds may have hip dysplasia, a potentially crippling disease. Breeders should screen all their breeding stock with OFA to reduce the chances of their puppies having HD.

Bloodhounds, because of their physical shape, are extremely prone to Gastric Torsion or Bloat as it is more commonly called. Be sure that you discuss Bloat with your veterinarian, especially on what the physical symptoms are and where you can obtain emergency veterinary care after hours.

This condition can kill dogs in a matter of hours and is very common in this breed.

Other sources of information:

As a rule, Bloodhounds (and other breeds of similar size), do not live as long as their smaller counterparts do. The typical lifespan for a Bloodhound is about 9-11 years of age, with noticeable aging occurring as early as 8 years of age.

Bloodhounds can be prone to entropion which is an inversion of the eyelid that can be quite painful and irritating to the dog. Surgery is generally required to fix the eyelid.

A good number of Bloodhounds have allergies and/or food and pollen sensitivities. 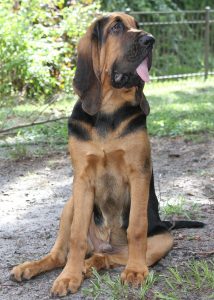 Bloodhounds are the largest and most powerful of the hound family.

They weigh up to 110lbs/50kg and stand as much as 27in/69cm at the shoulders. They have a very expressively wrinkled face with pronounced flews and dewlaps (lips and throat), giving them a most solemn expression.

The coat is thin, hard and short. Colors are black and tan, tawny, or red and tan (“liver” is sometimes used instead of “tan”). The eyes are neither sunken nor prominent, although the excess skin may pull the lower eyelids down.

The ears hang low and are long and soft. They are a relatively rare breed; you will only see a few, if any, at most dog shows.

The Standard is the physical “blueprint” of the breed. It describes the physical appearance and other desired qualities of the breed otherwise known as a type. Some characteristics, such as size, coat quality, and movement, are based on the original (or current) function for the dog.

Other characteristics are more cosmetic such as eye color, but taken together they set this breed apart from all others. The Standard describes an ideal representative of the breed. No individual dog is perfect, but the Standard provides an ideal for the breeder to strive towards.