The Shiba Inu is the most popular dog breed in Japan, according to the Japan Kennel Club. You can trace their history back to 300 BC and these dogs have been used for generations to hunt game in high mountain ranges.

Although they almost went extinct after World War II, several breed enthusiasts brought them back, and today, they are the 44th most popular dog in America. 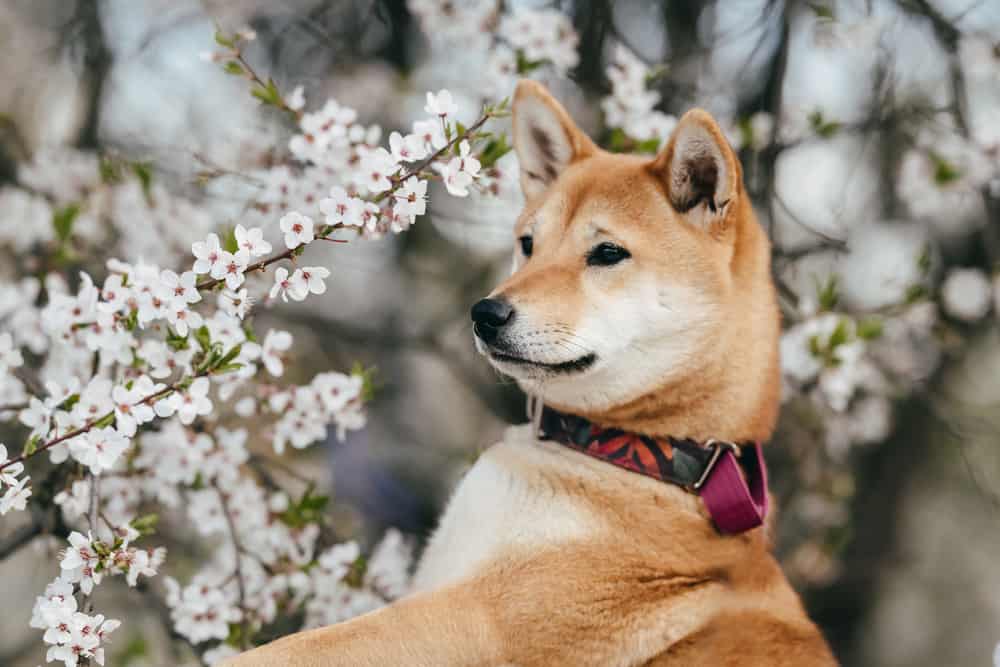 They are characterized by their curly tail, adorable smiley faces, point ears, wolf-like appearance, and lion-like manes. They are medium-sized dogs that weigh between 16 and 25 pounds and stand between 13 and 17 inches tall.

These beautiful dogs come in a wide variety of colors, including red, cream, black, and tan, and a unique sesame coloring. They also have some marks that are characteristic of the breed.

In this article, we’ll examine the different colors of the Shiba Inu’s coat and help you determine which dog might be the best one for you.

The genetics of the cream Shiba Inu coat color

The coat of the Shiba Inu has a fluffy undercoat and longer, coarser hairs on the top. While it looks pretty similar to the coat of the Husky breed, these two dogs are not related.

While you may find long-haired Shiba Inus being advertised online, this genetic mutation is considered a flaw by the American Kennel Club (AKC).

Do Shiba Inus’ coats change colors as they age?

The Shiba Inu’s coat can change color as your dog ages because it can take several years for your dog’s coat to fully develop.

One of the most noticeable changes is that the white markings on these dogs can fade and even disappear over time.

Some dogs are also mistakenly labeled as Sesame Shiba Inus as puppies, but the coat of these dogs changes as they get older.

What are the Different Colors of a Purebred Shiba Inu?

There are four recognized colors of purebred Shiba Inus. These include red, black and tan, cream, and sesame, also known as red sesame.

The Red Shiba Inu is the most common color. These dogs are also the most favorite and are known to walk away with the top prizes at dog shows. This is likely the original color for the breed and gives the Shiba Inu a cute, fox-like appearance.

The white markings on a red Shiba Inu tend to have blurred edges, with the red lightening in color towards the belly and chest.

The Cream Shiba Inu is the least desirable color variant of all four recognized AKC colors. This is because the trademark white markings of the Shiba Inu breed are almost indistinguishable on the cream coat.

These cream-colored dogs are also scarce as this coat only occurs when a puppy carries two recessive genes.

Seeing as all Shiba Inu are required to have white markings or Urajiro, the Back and Tan Shiba Inu is actually a tri-colored dog.

The coat of this dog is black with rust or tan tips, and a single hair from this breed variation will often display both colors. The white markings make it look like this Shiba Inu is wearing a cute bow tie.

The Sesame Shiba Inu is the rarest variety of all four recognized AKC colors. The requirements for a Shiba Inu to be labeled as sesame-colored are pretty strict. These dogs must have a red base coat with an even layer of black on top.

Some people may refer to the Shiba Inu as having a Black Sesame coat. This is actually the same color as the sesame mentioned above and not a different variation. The term black sesame comes from the Japanese word Goma.

White Shiba Inus are not recognized by the AKC and thus not accepted in dog shows or for breeding purposes.

However, some people may mistake the cream Shiba Inu as being a white dog. White is accepted as a color for this breed by the British Kennel Club.

Shiba Inus have a few markings and coat patterns. These are characteristic of the breed, and in fact, dogs without any markings are likely not purebred Shiba Inus.

If you are thinking of entering your dog into canine shows, then there are a few markings that your dog should prominently display.

The Japanese refer to the white marking on the Shiba Inu breed as Urajiro. These Urajiro are required white marks of the breed and are typically found on the cheeks, jaw, chest, neck, and stomach.

Shiba Inu can also have optional white marks on other body parts, such as their feet, that make them look like they are wearing socks.

Shiba Inus that cannot be classified as sesame-colored dogs because they do not meet the strict requirements for this color variation may, in fact, have sable markings.

What is the Rarest Shiba Inu Color?

The Cream Shiba Inu isn’t as desirable as the other colors because the characteristic white Urajiro markings do not display on this coat. Thus, you will seldom find cream Shiba Inus at dog shows.

That said, the Sesame Shiba Inu is likely the rarest coat color as there are stringent requirements for these dogs to be classified as pure sesame.

Is it okay to get a rare-colored Shiba Inu?

Yes, Cream and Sesame Shiba Inus are perfectly healthy dogs. If you don’t plan to show your dog, there is no reason why a Cream Shiba Inu won’t work for you.

However, be wary of anyone marketing Shiba Inus with other rare variations not mentioned above, as these are likely the result of cross-breeding and could have numerous health problems.

There is no scientific evidence that the color of your dog should affect his temperament or behavior. These dogs are beloved family dogs and companions known for their loyal, proud demeanors.

They also make excellent guard dogs as they are very alert and quite feisty canines.

However, that can make them reserved around strangers, so these dogs will require plenty of socialization from a young age to hone their personality’s affectionate, friendly side.

These unusual colors could result from inbreeding by an unscrupulous breeder or puppy mill, and these puppies will likely have a host of health problems.

Shiba Inus have unique eyes. Their recessed eyes are triangular with thick eyelids, giving these dogs a lonesome look.

While puppies may be born with lighter eyes, they should darken pretty quickly as this breed is known to have black or very dark brown eyes.

Your Shiba Inu has a double coat which means the cost consists of a soft, fluffy inner layer that keeps your dog warm in cold temperatures and a longer, more protective layer on the outside.

These dense double coats don’t tend to tangle or mat and can be kept looking shiny and healthy with regular brushing.

Due to the double coat, the Shiba Inu is quite a heavy shedder, notably twice a year with the changing of the seasons. Again, regular brushing of your dog will help to minimize the amount of fur you find around the house.

Conclusion: Which Shiba Inu Color Will You Choose?

The Shiba Inu is a beautiful breed, no matter which color dog you decide to get. These are stunning companions that are well-loved for their red and white coats but look just as good in tan and black or the rare sesame-colored variation.

Even the less-desirable cream color dog will make a good companion if you don’t want to win any awards at the dog show.

With their characteristic white markings, fluffy double coat, curly tail, and dark black eyes, this breed stands out from the rest, and no matter which colors your dog, he is sure to turn heads.

Do you have a Shiba Inu? We would love to learn more about him and hear his coat’s color in the comments below.