Any dog lover will tell you that it’s such a shame that dogs don’t live longer. This is especially true for larger dogs, because small breeds generally have longer life spans.

The average German Shepherd lives for 10 years, but is there any way to ensure your pooch lives longer than expected? We’re about to find out! 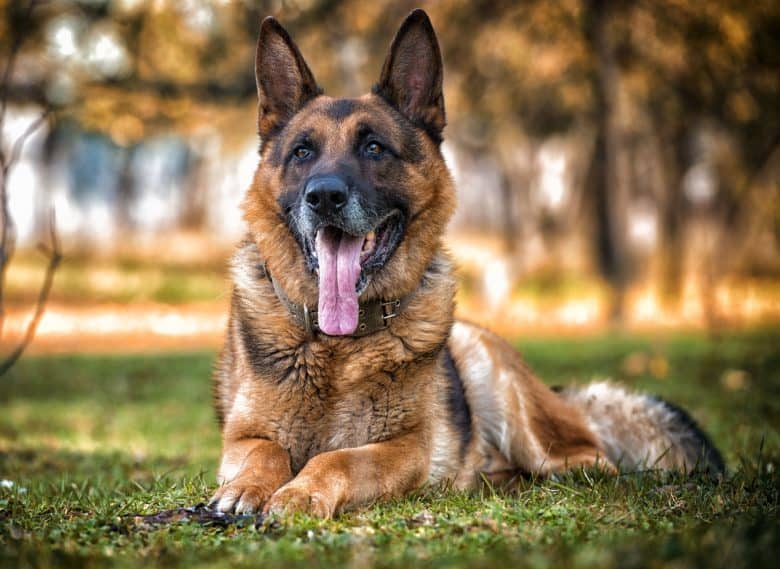 Below is everything there’s to know about extending the German Shepherd life span.

The life span of German Shepherds actually depend on their genetics. Those that come from healthy and long lived lines, will often surprise you with their longevity.

Puppy mill dogs don’t have the same luxury, and you’ll be lucky if they make it past 6 years old.

On an average, you can expect your best friend to celebrate their 10th till 13th birthday with you.

However, the AKC contradicts this information by listing their lifespan around 7 to 10 years. Why the discrepancy? American dogs often suffer from obesity.

Breeders in the United States are also less regulated than Europe breeders, which contributes directly to their Alsatian breed’s overall health.

Owners have reported their GSDs living well into their teens and beyond, with the oldest being between 18 to 20 years old.

However, there are no official records to go by, and these are all based on word of mouth.

Considering that there’s no GSD on the list of the world’s oldest dogs, we can conclude that no Alsatians have lived past the age of 20.

It does seem that females live 1.4 years longer on average, than males do. The general median for females is 11.1 years, whereas male GSDs don’t live past 9.7 years.

One human year equals seven dog years is a popular myth which has been dispelled in recent times. The reason it stays so prevalent is because there’s no easy way to calculate a dog’s life.

Dogs age at different speeds throughout their lives.

These popular dogs from Germany are considered adolescent between five to eight months of age. They reach young adulthood at 18 months to a few years of age.

Look at Big Boy Bane grow from a little puppy to a one year old dog:

The AVMA places a one year old doggy to be about 15 – a teenager. When they hit the two year mark, they will be a young adult at 24 to 25 years old.

After that, they should be gaining five years for each additional birthday they pass. Therefore, a ten year old GSD would be akin to a 63 to 70 year old human.

Below is a simple table to help dog owners easily convert their dog’s years into the human equivalent:

This calculation cannot be applied to all dog breeds, which is why there isn’t one universally accepted conversion rate.

Small dogs age slower, and so do mongrels. It’s the large breed pedigrees that have the shorter end of the stick.

If you’re set on a German Shepherd, maybe you can check out German Shepherd cross breeds. They often inherit the Alsatian’s traits while being more long lived.

There are a multitude of factors that can affect the German Shepherd dog’s lifespan. Many of which can be mitigated or prevented.

To understand more about how to care for these large dogs, we must first understand the breed.

Max von Stephanitz intended for this herding dog to be the best at what they do. They were meant to be hardy creatures that can also adapt to family life.

Over time, the dog breed evolved and the German Shepherd became a popular breed as a police dog, family dog, working dog, and search and rescue dogs.

Diet: You are what you eat

Ensuring that your dog lives a long and fulfilled life starts from puppyhood. A balanced meal is integral to your German Shepherd puppy’s health.

Overfeeding can contribute to obesity, which in turn, will affect their general health.

Senior dogs will need a different formulation to optimize their health, giving them a boost where necessary.

Unsure what is considered good dog food? We have a comprehensive guide for you here.

Exercise: How much exercise for their energy level?

Aside from nutrition, puppies also need appropriate amounts of exercise.

According to experienced owners, GSD puppies should only be exercised for 5 minutes for every month of their life.

A three-month-old can go on 15 minute walks, and a one-year-old GSD will be able to exercise for one whole hour.

Care should also be given that they don’t run down the stairs or play on hard surfaces. Sudden stops can lead to injury.

Overexerting your dog from a young age can hurt their developing joints, which can lead to hip dysplasia. It is a debilitating disease that causes pain, and in severe cases, lameness.

When your dog reaches two years of age, they should be exercised vigorously daily for an hour or two. This will ensure that they stay in optimum condition.

Dogs that don’t get enough stimulation often develop behavioral and health problems. There are plenty of activities that you can do with your dog to keep them healthy. 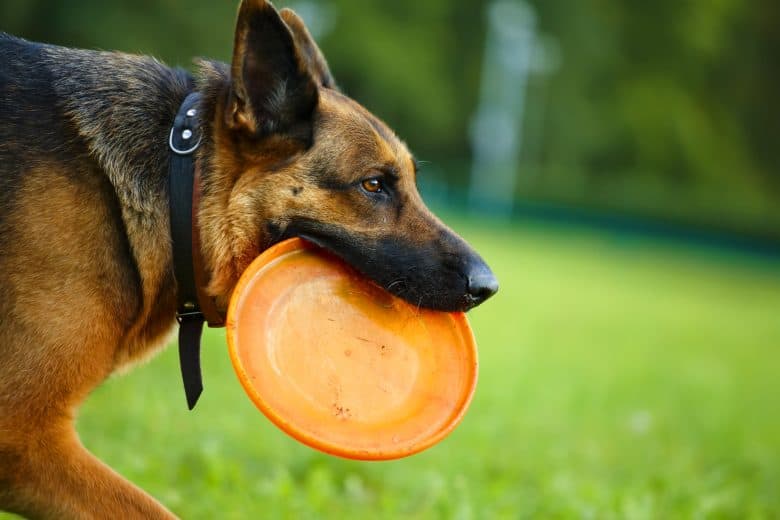 Get a frisbee or tennis ball off Amazon and teach them to catch it. You can also engage them in hide and seek either with a kong filled with peanut butter or with your person.

There are some people who even do yoga with their dogs!

Parentage: How their family members make a difference

Breeding also plays into their longevity. Dogs that are purely bred for functionality and temperament rather than desirable physical features are often healthier.

Some breeders practice in-breeding to keep certain traits, which can lead to many health problems as sickness and disease are often hidden in recessive genes.

Breeding too closely can cause these problems to appear.

Line-breeding is slightly less risky, much like the inter-marrying tendencies of monarchies, dogs are bred to their far off cousins instead of their siblings.

This helps prolong the German Shepherd’s average lifespan while retaining the traits that breeders hope to see in their purebred dogs.

The founder of the breed, Max von Stephanitz has also practiced line-breeding to develop his idea of the best dog.

Unfortunately, many years of showing at AKC conformation shows has compromised the dog’s posture, performance, and lifespan. 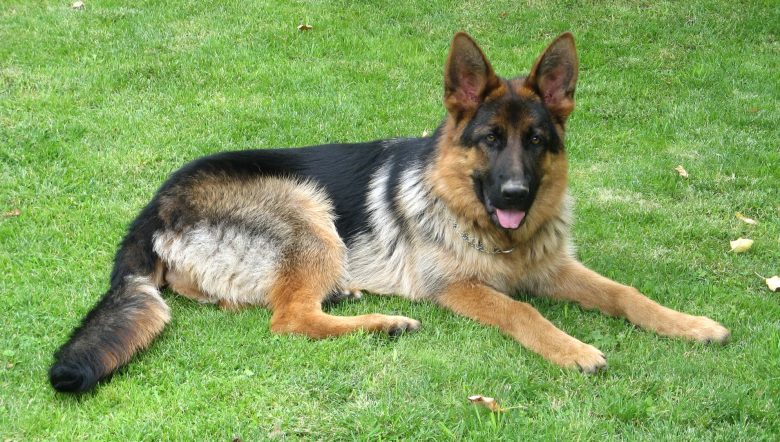 Over the years, show lines in particular have become subject to the fancies of show judges.

This meant that the desirable slight slope of the back has become overbred to the point of deformity. Excessively sloped backs can cause a number of health issues.

The American Kennel Club are complicit in affecting the overall health of an otherwise healthy breed.

This is due to their stringent breed standards and ideas on what an ideal GSD should look, even if it’s at the cost of the dog’s quality of life.

What do German Shepherds usually die from?

There are a few hereditary problems that GSDs might face, but the breed as a whole is considered quite healthy.

Exocrine pancreatic insufficiency (EPI) which causes maldigestion is very common in German Shepherds. One of the key reasons why they should be fed a gentle kibble.

When going for check-ups, your vet should also screen for cardiac evaluation and autoimmune thyroiditis.

Regular screening and early detection of any health problems will help prevent your dog from a premature death.

Other screenings you might want to be open to are hemangiosarcoma and bone cancer.

How do I know if my German Shepherd is dying?

Dogs that are nearing the end of their life span are usually lethargic. They might not want to participate as much and would much rather sleep all day.

Try not to neglect them and shower them with affection instead.

They will usually lose weight and their undercoat will become quite sparse. Their double coats will no longer have the sheen of a healthy dog.

Dogs that suffer from spinal cord or joint problems might have weak hind legs.

We’ve covered food and nutrition above, as well as veterinary care and exercise. What other things can you do to ensure that your dog lives a high-quality and fulfilled life?

They will need to be mentally stimulated. While we’re not saying you should train your dog to be the next Rin Tin Tin, they do need a job or a purpose. 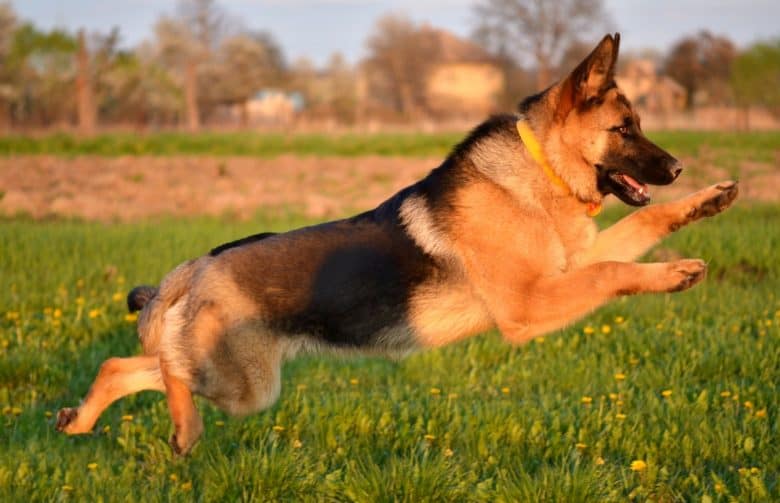 Training can also be a key factor in deciding how long your dog will live. An untrained dog might run out into the road and ignore your calls.

Similarly, puppies tend to chew on everything. Accidentally ingesting a sharp pebble or sock can be fatal./em>

Dogs that have been trained up know how to behave themselves and won’t feast on just about anything.

Improper training or neglect can cause behavioral problems.

When faced with an aggressive dog, especially one as large and powerful as a German Shepherd, one of the most common solutions is to put them down.

Therefore, socialization is just as important, even if you’re training guard dogs.

What to do if your German Shepherd is near the end of his life?

When the end of the German Shepherd’s life span is near, you might want to start preparing yourselves for their eventual departure.

Some owners choose to purchase another dog prior to the passing of their senior pet, to alleviate their grief. Some prefer not to be distracted as they grieve.

Talk to your family members and see what is the most comfortable option for everyone.

Some choose to cremate their pet or hold a memorial for them. You can also have a burial in your yard. Pet cemeteries have also gotten quite popular in recent years.

But ultimately, the final decision lies with you and your family.

How the German Shepherds lifespan compares to other breeds

They aren’t the dogs with the shortest lifespans. Dogs in their size group can be as short-lived as the Bernese Mountain Dog or Rottweiler, neither exceeding 9 years for their life expectancy.

This places the German Shepherd lifespan as longer than some. They share the same life expectancy as Golden Retrievers, but they aren’t as prone to cancer.

Since conformation dogs are often riddled with health problems, working dogs should be more long-lived. Don’t take their coloring for granted though, sable dogs can also be bred for the show ring!

Do your due diligence and research carefully when looking for your buddy. With luck and determination, you’ll have him for the next decade or more.

Have an old German Shepherd? Tell us all about him in the comments!