Other than being the fastest dog breed, English Greyhounds are also dubbed as the “world’s fastest couch potato” because of their two speeds: Go! And Netflix-and-chill.

This slender purebred is built for speed, affection, and taking up space on a comfy couch.

I don’t understand how they only rank 162 in most popular breeds. In this article, I’ll explore everything about the Greyhound so you can decide if this pup deserves more popularity!

Where did the Greyhound originate?

The Greyhound is an ancient breed. Evidence of these long, lean beauties dates back to the earliest cave drawings and Egyptian artifacts.

In the 11th and 14th centuries, they were a noble breed and cherished among kings and queens in England. In fact, English law stated, “No mean person is allowed to own a Greyhound.”

These dogs are thought to have originally been bred for hunting– they were obviously faster than any prey. Over time, they were used as racing dogs, then as companions. They belong to a family called Sighthounds.

Sighthound breeds are built for incredible speed and endurance. They’re aerodynamic, slender-boned, and extremely low in body fat. They almost always look like they’re in motion, even when they’re completely still.

The AKC first recognized the Greyhound in 1885 as a member of the Hound Group.

Pretty much every part of a Greyhound is long and lean, from their legs to their necks and face. Their necks are slightly arched and fill out into their shoulders.

They’re deep-chested, and their ears can either be relaxed at the sides of their head or erect if on alert.

They have dark-colored noses and hazel or brown eyes— AKC standard defines these dark, soulful eyes as “indicating spirit.”

The breed standard also says their heads will be long and narrow with long, pronounced noses; their front end should be symmetrical and balanced; and their hindquarters should be wide, muscular, and powerful.

They truly are a work of art!

The two types of Greyhounds

NGA racing Greyhounds are generally smaller in size than the Show hounds and more heavily muscled around their necks.

Although they tend to have great cardio health, they are at higher risk for things like bone cancer and leg issues from racing stress.

AKC Greyhounds fit the breed standard and are much narrower and taller than the NGA’s. Their coats are also silkier.

If you are looking for a Greyhound puppy, you’re most likely to end up with an AKC type since the racing Greyhounds aren’t adopted out until their racing careers end as a full-grown adult dog.

How much do Greyhounds weigh?

A full-grown Greyhound ranges from Medium, Large, to Giant in size, weighing between 50-70 pounds or more. They stand tall at 28-32 inches in height.

Greyhounds have almost no body fat; their skin is almost transparent! Females are generally smaller than males.

These dogs wouldn’t do well in an apartment; they need a bit more space than that. They’d do best in a house with a large, fenced-in yard.

The Greyhound coat and colors

Greyhounds have short and smooth coats: They’re low-maintenance, and their variety of colors only adds to their unique and stunning appearance.

Blue Greyhounds are extremely rare; they’re often confused with grey-colored coats. In addition to the array of colors the Greyhound comes in, there are also some cool possible markings and patterns:

They’re a perfect family dog because they’re great with children and other pets as long as they’re socialized at an early age.

It’s important to note that this breed has a strong prey drive, so they should really only cohabitate with pets that are their size or at least close to it.

They may tolerate cats if properly introduced, but they wouldn’t do well with small animals like rabbits.

It might be shocking to hear that the fastest dog in the world is also one of the most calm, possibly even most lazy.

While Greyhounds wield the speed– up to 40 miles an hour!– they prefer not to show it off. They’d rather lay around the house on something soft, including you! They’re slender cuddlebugs.

They’re generally pretty quiet and definitely prefer a household to be that way– they’re peaceful and respond best to gentle, soft-spoken owners. They can be wary around strangers and will cling to you for comfort.

This breed doesn’t have any outstanding aggressive tendencies. They can get annoyed over loud noises or if someone disturbs their resting time, and they’ll either let out a grumble or simply walk away.

While Greyhounds are not typically excessive barkers, they are prone to social anxiety if left alone for too long; and barking may be one way they express that anxiety, as well as destructive behaviors in the house.

Greyhounds are an extremely intelligent breed and are therefore pretty sensitive when it comes to getting the right amount of attention.

Check out these adorable Greyhound pups practicing their tug-of-war game:

Beauty and Brains: Are Greyhounds smart?

These dogs are highly intelligent as I’ve said earlier. Similar to many intelligent breeds, they are not always as easy to train.

They prefer low to no activity and more relaxation. It could be difficult for them to find motivation to work with a trainer. It’s important you provide puppy training from early on (as early as 8 weeks).

That said, they are generally easy to housetrain.

The best strategy for potty training a Greyhound is to take them out every few hours with words of encouragement and praise for when they do their business! They love praise.

Keep in mind racing Greyhounds can run up to 40 miles per hour— that, combined with their prey drive and intelligence, can be a recipe for a wanderer!

Keep an eye on your pup at all times, and never leave them outdoors unsupervised.

While Greyhounds can swim, their build doesn’t make for a very buoyant pup, so don’t count on your Greyhound being the next Michael Phelps.

They’d rather walk and run than get into the water unless they absolutely have to.

How to take care of your Greyhound Dog

Greyhounds are relatively low maintenance in terms of their exercise and grooming needs.

Their biggest sensitivity might be to extreme weather. They don’t tolerate severe hot or cold very well.

Yes and no. As mentioned, Greyhounds might be fast but aren’t built for endurance; they rock the energy in short bursts for a quick run but prefer much more naps or relaxation.

One 30-60 minute walk each day is more than enough to satisfy a Greyhound’s energy needs. These dogs should always be leashed.

These dogs are low to moderate shedders and are NOT hypoallergenic. You should groom your Greyhound once every week or two weeks.

You should use a slicker brush on your Greyhound’s coat, paying very careful attention to the process as their skin is so thin and may be susceptible to cuts, tears, and sores.

You should check their nails and teeth daily, as they’re prone to tartar build-up which can lead to more serious health risks.

Bathing is only necessary as needed or every 6 months. You should always use mild shampoo because of their sensitive skin.

These dogs barely smell at all because of their super short coats. Your Greyhound may or may not enjoy a quick bath– every pup has its own personality despite the breed’s tendencies.

Greyhounds should eat 3 cups of high-quality dry kibble a day. They’re prone to obesity which can be very dangerous. Their food should consist of quality protein sources like turkey or chicken.

A dog’s dietary needs will change as they grow, so it’s best to consult your veterinarian when deciding what to feed.

Do Greyhounds have a lot of health problems?

Greyhounds are generally healthy dogs with a lifespan of 10-13 years. Like any other breed, though, they are susceptible to certain health risks.

You can minimize these risks by taking proper care of your Greyhound and following a regular veterinary appointment schedule.

As I’ve mentioned, Greyhounds are large-chested dogs. This makes them prone to a fatal condition called Bloat, which is caused by a build-up of gas in the stomach after eating too quickly.

It is always fatal within hours if not treated with emergency surgery to undo the damage before it’s too late.

There has been mixed research regarding using raised feeding bowls for tall dogs with large chests; the most recent have indicated that using this method actually increases the risk of bloat because it makes for even quicker ingestion.

Unfortunately, the culprit of most Greyhound deaths is bone cancer (osteosarcoma). This is especially in retired racing dogs as excessive exercise puts stress on these dogs’ bones.

Here is a list of other health problems to which Greyhounds are prone:

A proper Greyhound health screening should include heartworm prevention and cancer screening.

How much is a Greyhound puppy?

The cost of a purebred Greyhound puppy can range from $600-$1000, but a young adult retired racing Greyhound can cost only about $325 for the adoption fee. Champion bloodlines will inevitably be more pricey. 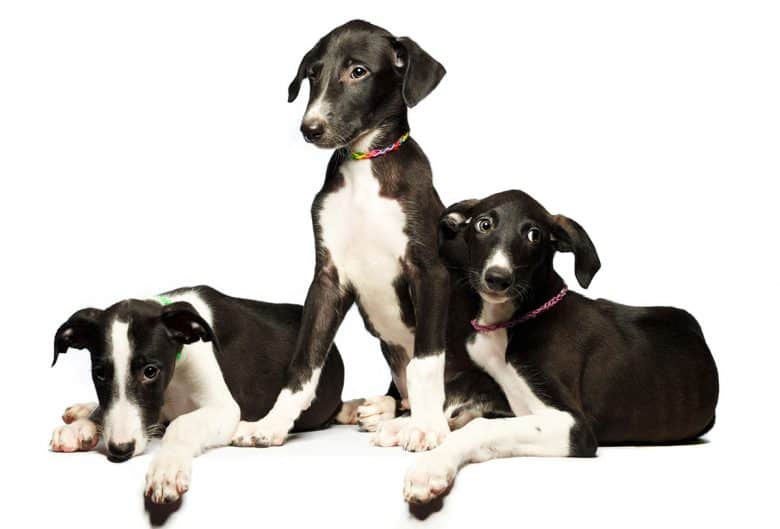 In addition to this cost, keep in mind other costs associated with buying a new dog: veterinary, food, toys, bedding, training, and grooming.

You should always consider adoption as a means of getting your dog. Retired racing Greyhounds often end up in shelters– or worse.

These dogs have spent their whole lives training, running, and most likely in pain because of the stress this amount of running can cause. They need loving families.

If you do decide to go through a breeder, make sure they are reputable: they let you ask questions, they ask you questions, provide proper health certificates, and they let you meet the parents.

Be wary of puppy mills and the pet stores they often end up in.

Who should get a Greyhound dog?

The ideal Greyhound owner will be a family with a house, a fenced-in yard, and lots of attention to give. These dogs need owners who have time to relax every day in a comfy spot.

Some pros of owning a Greyhound are: they’re low maintenance in their grooming and exercise needs; they’re also affectionate and gentle in temperament and excellent with children.

Cons include: they’re susceptible to separation anxiety and may engage in destructive behaviors if left alone too long; they’re large dogs that need a lot of room, and their risk for serious health concerns like bloat and cancer is pretty high.

Further reading: Dogs that are similar to Greyhounds