Home » Breeds » Why is the Yellow Labrador Retriever so Iconic?

When you think of Labradors, it’s hard not to imagine a Yellow Lab even though this popular breed comes in three colors.

Did you know that Yellow used to be the rarest color? Black Labrador Retrievers were the most common! But how did Yellow Labs become so prevalent in today’s world? 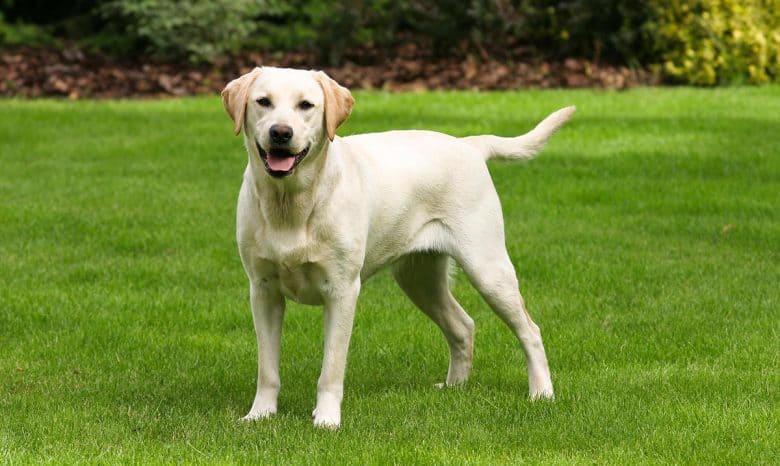 Read on to learn all there is to know about the Yellow Labrador.

Where Did the Yellow Labradors Originate?

In the early days, Yellow Labradors were undesirable and culled at birth, along with Chocolate Labrador Retrievers.

Between the late 1800s and early 1900s, Black Labs were considered the most preferable gundog and have remained so to this day.

The first notable Yellow Lab was a stud called Ben of Hyde.

The first time a Yellow Lab competed in the show ring was in 1913.

Yellow Labrador Club was founded in 1924, and it boosted the breed’s popularity. But, it wasn’t until a successful commercial featuring a Yellow Lab was released in 1972, did they become highly sought after.

You can watch some of the outtakes by the Andrex or Kleenex puppy here:

Today, according to the American Kennel Club (AKC), the top dog breed in the United States is the Labrador.

They can be found in the show ring, as service dogs or search-and-rescue dogs, and are a famous choice as family pets.

Do Yellow Labs only have yellow puppies?

What’s funny is that every litter has the potential to have Black, Chocolate, and Yellow Labs. But if both parents are Yellow, the entire litter will be Yellow. 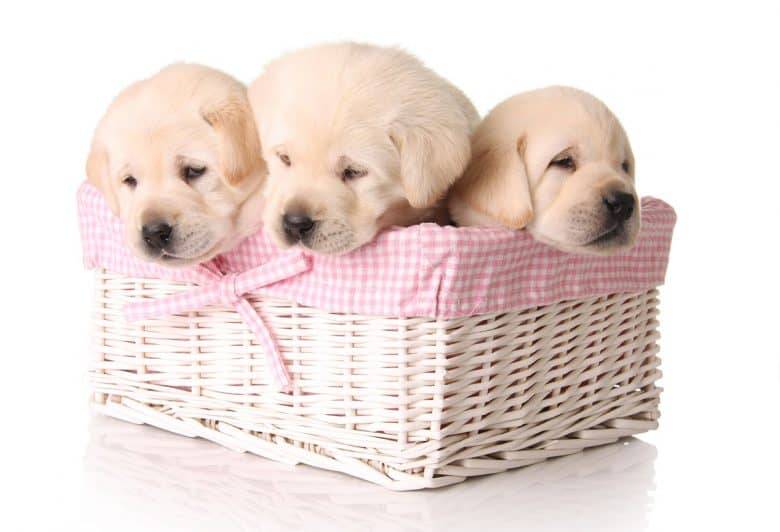 It’s possible to get a Yellow puppy (or more) in Black or Chocolate pairings.

According to the AKC, Labs of all colors should have kindly brown eyes and a broad skull. Their build should be athletic and strong. They have what is known as an “otter tail.” Long and flat, with no curl or feathering.

The Lab has short coats, but they have a dense undercoat and a coarse, waterproof topcoat.

Many purebred dogs don’t conform to the breed standard. One way to tell whether your dog is purebred is to have papers from a recognized kennel club.

While researching Labs, you might come across the so-called American Labs and English Labs. They are nicknames for show dogs and field dogs.

American Labs often do not conform to the breed standard, are taller than English Labs, and have a more slender build.

The English Lab is meant for the show ring and will be the epitome of Labrador aesthetics. Thick ruffs, blockheads, large paws. They generally look very heavyset when compared to their working counterparts.

Read our article to learn more about the differences between the American and English Labs.

How big do Yellow Labs get?

Your little Yellow Labrador puppy will grow up into a medium to large dog.

For more information on their size, we do have a Lab Growth Chart you can refer to.

Are White, Red, and Yellow Labs the same?

A Yellow Lab’s shade can range from red or dark golden to a very light cream or white color. That’s right, Fox Red Labs and White Labs are all considered Yellow Labs.

Yellow Labs can have white markings and still be registered as purebred. Unfortunately, it will eliminate them from the show ring.

This means that while they can be a good working dog or family pet, they won’t be able to compete.

Take a look at all the possible Lab colors here and learn more about other shades like the Silver Labrador.

Why are Yellow Labs so Friendly?

One of the most famous Yellow Labs of all time has got to be Marley from the movie Marley and Me.

The film stars an overactive and destructive Lab that ultimately steals his family’s heart. He is the exception to the breed standard, as most of them are obedient and easy to train.

These dogs are intelligent and loyal, with a gentle nature due to their close relationship with their handlers. Fishermen and hunters often rely on their dogs to retrieve their game and work as a team.

Friendliness has been irrevocably bred into the breed, as well as dependability. These dogs take what they’re given and amplify it with their love. A well-loved doggo will be the best friend you can ever ask for.

This means that a mistreated Lab might become fearful and even aggressive.

How to Take Care of Your Yellow Labrador?

Labs love to be around people and are not suitable to be left for a long time. They have high energy levels and require time and devotion from their owners, as well as copious amounts of stimulation.

Labradors are active pups that need to be exercised daily. You’ll have to spend at least an hour with your Labrador to make sure he’s physically and mentally stimulated.

They enjoy feeling useful and will be more than happy to fetch your paper. Give them a job to do or enroll them into obedience or agility classes.

If you are an active person, your Lab will also love going outdoors with you. Be it jogging, trekking, or hunting. These dogs are also swimmers and will be happy to jump into the pool with you. 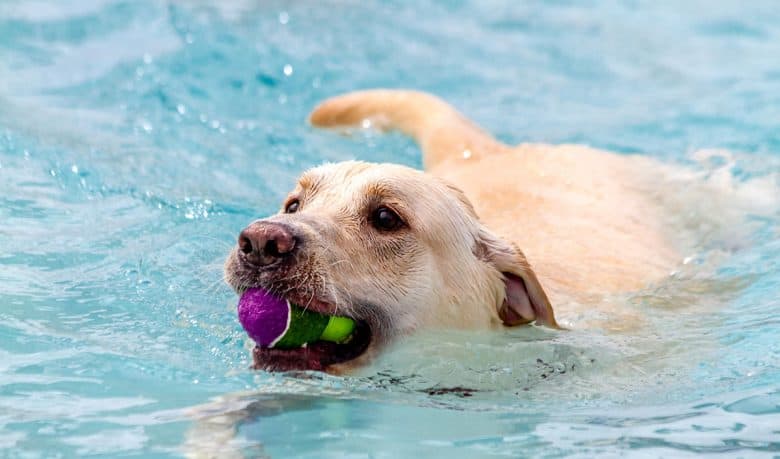 Grooming your Lab is a walk in the park

Labradors are low-maintenance dogs, but they are notorious shedders. They shed seasonally, and some owners find that a Furminator or de-shedding tool helps keep it under control.

When it comes to bathing, you can rinse them off with plain water or brush any dried mud from their coat.

They only need to be washed when you’ve noticed that they’re filthy or stinky because their fur is weather- and waterproof. Shampoos have harsh chemicals and can strip them of their natural protection.

Their nails and ears should be checked regularly. You can clip their nails with a canine nail clipper or use a nail file if you’re afraid of hurting them. 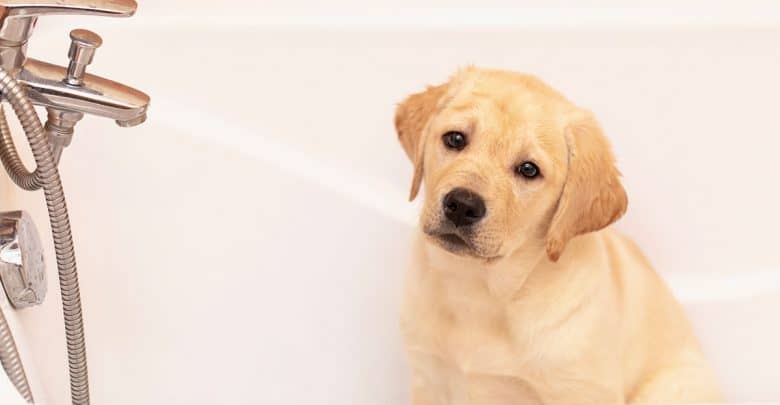 Do Yellow Labs have any special dietary requirements?

Choosing the right diet for your fido can help prevent health problems like hip dysplasia and can keep them up with their daily caloric requirements.

Considering its weight, age, and metabolism, a Labrador Retriever needs 2 to 4 cups of dog food daily.

You can find the best dog foods for Labs here.

As with any dog breed, certain health issues go hand in hand. Understanding the hereditary problems that come with your dog can help you prevent or keep an eye out for them.

Labradors are at risk of obesity, eye and ear problems, as well as hip and elbow dysplasia, a disease that hounds many large breed dogs.

With regular health screening and proper care, you will be able to keep these problems at bay.

However, Labradors are also prone to Hypothyroidism and Cancer.

Hypothyroidism can be easily treated with hormone therapy, but they will have to be treated for the remainder of their life. It is a syndrome that cannot be cured.

Cancer, on the other hand, has a high chance of recovery, especially when detected early. Most dogs succumb to cancer in their old age, so regular screening can keep your pooch healthy and cancer-free.

Labradors often live around 10 to 12 years on average, but plenty of dogs can outlive their life expectancy. Read more about the Labrador’s lifespan here.

Do Yellow Lab puppies get darker?

Some puppies get darker as they mature. Some develop a mottled pattern on their skin. Some dogs have noses that turn pink, which can either be a Dudley or a snow nose.

The difference between the two is that the latter darkens in summer. 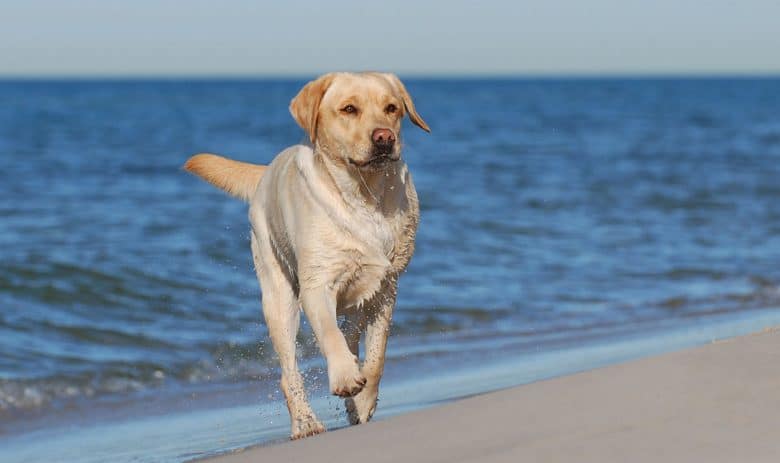 Puppies generally do get slightly darker as their guard hairs grow in. You might notice your Lab gets darker in the winter, and it’s often due to the undercoat’s growth.

There was a Black Lab that turned white due to vitiligo. However, such cases are rare. Your Yellow Lab should only experience minimal changes in its shade. Nothing as drastic as going from Yellow to a Chocolate Lab.

How Much are Yellow Lab Puppies?

A popular dog like the Lab is available in plenty of clubs and organizations. Regardless if it’s black, chocolate, or yellow, each Labrador Retriever puppy has a price range of $300 to $1,000, depending on the breeder.

Whether you’re looking for a canine companion or a hunting dog, be vigilant when buying a Yellow Lab or any pet.

Reputable breeders who care for their breeding stock always have the dog’s and the litter’s best interest at heart.

They run health screenings for the parents to make sure everyone’s healthy, and all of these costs add up, which is why some can get really expensive.

Puppy sellers who specialize in one color are rare, but here are a few websites of breeders and kennels that have available Yellow Lab puppies for sale:

Where to rescue a Yellow Labrador?

You can always opt to save a dog from your local shelter. Older dogs are great for those who want to skip the terrible twos of puppyhood. Labradors often settle down when they are three or older.

If you’ve got your heart set on a Yellow Lab, you can check these rescues out:

The biggest difference between the two is the Labs have a short coat that doesn’t need much maintenance. The Golden Retriever will need to be groomed weekly to keep its coat matt-free and pretty.

When it comes to temperament, the Golden is much milder, and Labs can be quite boisterous and hard-headed.

That’s to say, Goldens might mull over a scolding, whereas a Labrador will simply brush it off.

If you have a hard time deciding, you can check out our comparison chart found in our Golden Retriever vs Lab article or adopt a Golden Labrador instead.

Who Should Get a Yellow Lab dog?

Regardless of coat color, Labs are excellent family members for active households with spacious homes.

While Labs are well-rounded pups that are highly adaptable, they aren’t the best guard dogs. They do have a fearsome bark, though!

If you’re looking for a loveable pooch that will alert you to strangers, you can’t go wrong with a Labrador.