Labradors are America’s favorite dog breed for a reason. They are active dogs that are responsive, intelligent, and best of all, versatile.

You can find them in almost every industry. They are great hunters with soft bite, intuitive therapy dogs, and have earned their place in the police force as search and rescue, as well as sniffer dogs. 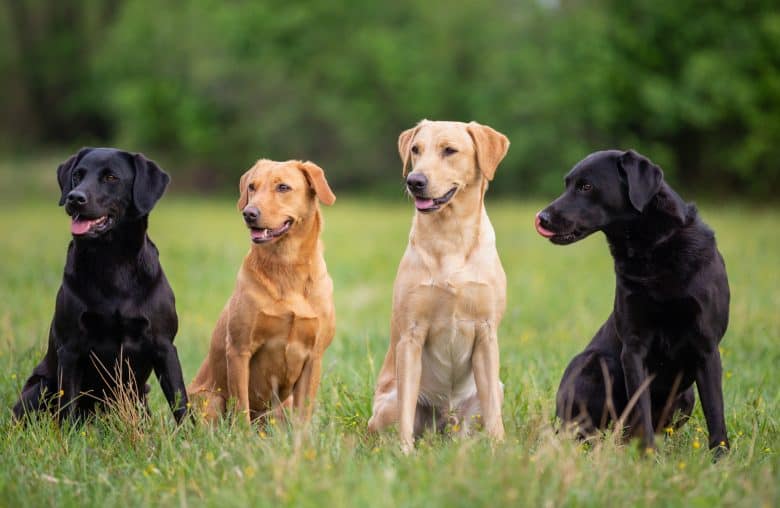 Plus, they also come in a multitude of shades.

If you’re a fan of Labradors, you might have noticed that they come in more than just the AKC-recognized black coat, chocolate color, and yellow coat.

You will find silver-coated Labs as well as dogs with a white spot that will not be able to compete in American Kennel Club events for the Labrador breed in spite of being genetically purebred because they do not conform to the breed standard. 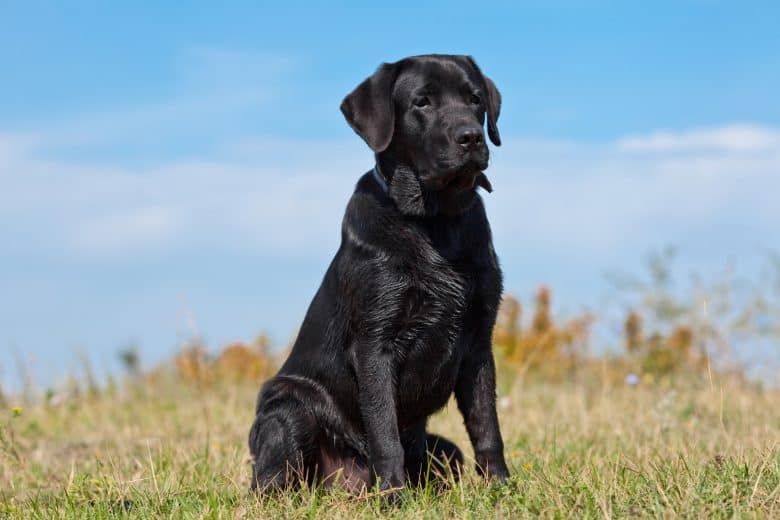 Black Lab is the most popular shade for gun dogs or hunting companions.

Since Labradors are descended from lesser Newfoundlands aka St. John’s water dogs which are black-coated, many sportsmen feel that it’s befitting to continue the line of great black hunters.

Aside from that, black provides better coverage and has a lesser chance of being spotted by the prey. Black Labs often have dark brown eyes, black noses and it is permissible for them to have a small white spot on their chest. 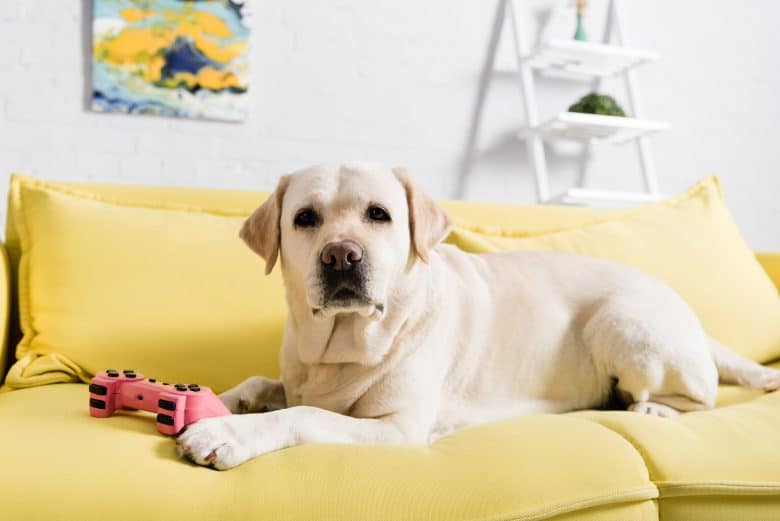 The iconic Yellow Lab looks very much like a Golden Retriever. You can read about their differences here.

Often seen in movies and as guide dogs. The truth is that service dogs come in all colors. There’s no real preference for yellow dogs in the service field.

The reason they are used so much in films and commercials is because they photograph better than other colors.

Yellow Labs should have black noses and dark eyes. A brown or pink Dudley nose will disqualify him from the show ring.

In spite of not being a desirable color when the breed first started, Chocolate Labs have made a name for themselves in the show ring. They come in all shades of brown, from a light liver to dark mahogany.

Chocolate Labs can have lighter colored eyes, and it’s not rare to see one with hazel eyes. According to the UKC Labrador Retriever Club, “hazel does not mean green”. It is also permissible for them to have liver-colored noses.

A color that’s gaining popularity with the sporting community, Fox Red Labs are often used as working dogs. They are the darkest shade a Yellow Labrador can be.

They are often mistaken for Vizslas or Rhodesian Ridgebacks and are just as often accused of being mixed. However, history begs to differ.

In the first photograph depicting a Yellow Labrador, it’s obvious that his fur is not the yellow we recognize today but the variant we refer to as fox red.

Being a variant of Yellow Labs, their eyes and noses are often dark but can also exhibit the Dudley condition.

White Lab is another variant of the Yellow Labrador. These dogs are on the opposite of the Fox Red Lab’s yellow spectrum. While the kennel club doesn’t recognize the White Lab as a color on its own, they are welcomed in the show ring.

Like the Yellow Lab, they should also have dark eyes and noses. Lack of pigment could be a sign of albinism which can cause health problems.

Silver Labs are Chocolate Labs with a dilute genotype. This makes their coloration the mysteriously wonderful silver coats that we’ve come to associate with Weimaraners.

It isn’t surprising, then, that many people insist that Silver Labs are actually Weimadors or Labmaraners.

Since black doesn’t show up as black on these puppies, they will have silver noses as well as silver-pigmented skin.

What is a Champagne Labrador?

These beautifully colored dogs are Yellow Labradors with the dilute gene. The same thing can happen with Black Labs as well and they are called Charcoal Labs.

In Champagne Labs, their noses are lightly colored and their eyes can be a pale green or light brown.

A gene is made up of two alleles, one from each parent. In black dogs, the code is written as BB. In brown dogs, it’s bb.

Yellow dogs can have either BB, Bb, or bb because the gene that makes them yellow is the ee gene. They can be any combination of the eebb genotypes because the ee gene bypasses any B or b gene the dog inherits and suppresses it.

Some genes are recessive and will only show up if paired with another dog that possesses the same recessive gene.

That’s why sometimes a white puppy might seemingly appear out of nowhere, or a Silver Lab pops up in a litter of black puppies. It might be rare, but it’s not unheard of.

Predicting the color of Labrador puppies has been made easy thanks to genetic tests. But armed with the knowledge of how genetics work, anyone can make an educated guess.

When an EEBb or EeBb breeds together, the puppies have the potential to inherit the b allele from each parent, making them Chocolate Labs. The same can be the case for Black Labs carrying the EeBb or EeBB genes.

Here’s a table detailing what might happen when two Black Labs are bred:

When two Yellow Labs have a litter, their puppies will always be yellow. You can get Fox Red Labs and White Labs along with Yellow Labs, but you will never get black or chocolate puppies.

It’s because the gene that makes them yellow turns off the black or chocolate genes.

Chocolate Labs might throw the occasional Yellow Lab, but they can never have black pups. If both parents are dilute factored, they might have a Silver Labrador.

When you put a Chocolate Lab with a Yellow Lab, they have the potential to have all three colors, including black. In fact, you have the same odds of having black puppies as chocolate puppies. There’s a smaller chance of yellow puppies.

Putting a Black and Chocolate Lab together will result in a high chance of having black puppies in each litter. Brown comes in at second and yellow only has a two in eight chance of showing up.

Breeding a Black and a Yellow Lab could produce all-black litters or have a mix of all three colors but a black puppy will likely be present.

Do Labrador Retrievers Change Color as They Age?

The Lab has the potential to change shades as they grow up. This is due to their guard hairs growing in. Also, Labradors tend to lighten with age, showing as a few white whiskers around the muzzle or a faded nose.

There’s only been a few recorded instances of a Lab turning into a completely different color.

Blaze the Black Lab started growing a few white strands on his face and his owners chalked it up to age. After a couple of months, his entire face was dotted in white, and his body soon followed.

This change of color is caused by a skin condition called vitiligo, which causes the skin to lose pigment. Blaze isn’t the only Black Lab to suffer from this condition. Rowdy became an internet sensation after inspiring multiple Photoshop battles.

There are a few key health issues to look out for in different colored Labs. The dogs carrying the recessive dilute gene are more at risk for color dilution alopecia which causes hair fall and dry skin.

Chocolate Labradors have the shortest lifespan. Doctors theorize that because they are more prone to ear and skin infections, it takes a toll on their bodies. Most live 2 years less than the average Lab.

It is believed that the breeding practices to attain Chocolate Labs have led to the shortening of their lifespan. Since they require two parents with recessive genes, it significantly narrows the gene pool.

Black and Yellow Labradors have a median age of 12.1 years. They suffer from the same health dispositions as any other color, the most notable being musculoskeletal disorders such as hip dysplasia, myopathy, and dystrophy.

Other health problems that affect the breed as a whole are cancer, epilepsy, hypothyroidism, patellar luxation, and eye problems.

Many of these health issues can be prevented with proper breeding practices which include regular health screenings. Read our guide on how to add years to your Labrador Retriever’s lifespan.

There has been no evidence to suggest that coat color has any correlation with temperament at all. All Labradors are created equal and are fun-loving, active pooches.

However, there are some Labs that are more high-strung, others that look slightly bigger. This is due to the type of Lab they are, whether intended for the show ring or the working field.

Also known as American and English Labradors, you can check out our comparison chart to learn more.

Taking Care of Your Labrador’s Coat

This popular dog breed sheds moderately and is relatively low maintenance. There’s no need for extensive grooming sessions. A simple brush now and then will do.

Due to their double coat, they will shed twice a year. To minimize shedding, you can give your dog a bath and blow-dry him. This will remove most of the loose fur.

Other than that, you should avoid bathing your Lab too often as this could strip the coat of its natural protection.

Which of these Labrador Colors is Your Favorite? 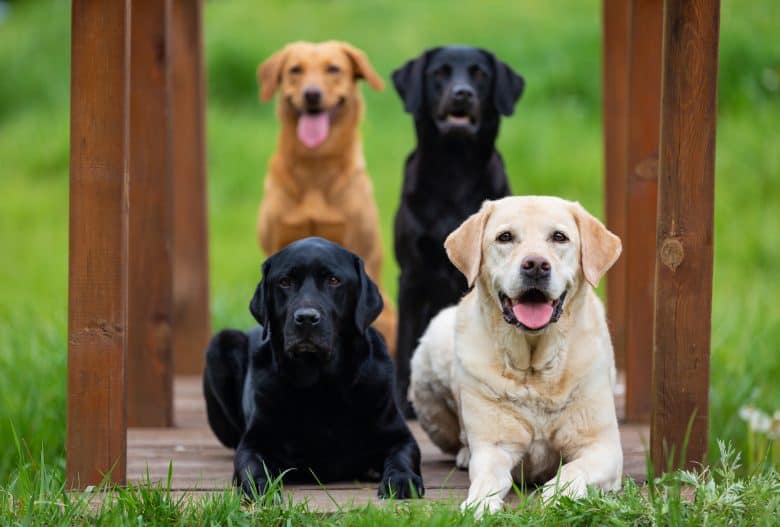 Labradors are a popular breed and exciting addition to any family. The most important thing doesn’t lie in looks, but the temperament and health of a dog. Don’t you agree?

Although, we have to admit that the Silver Labradors are rather striking, and there’s something about chocolate dogs.

If you’ve got a Lab and you’re stuck on names, check out our top Labrador Retriever names.