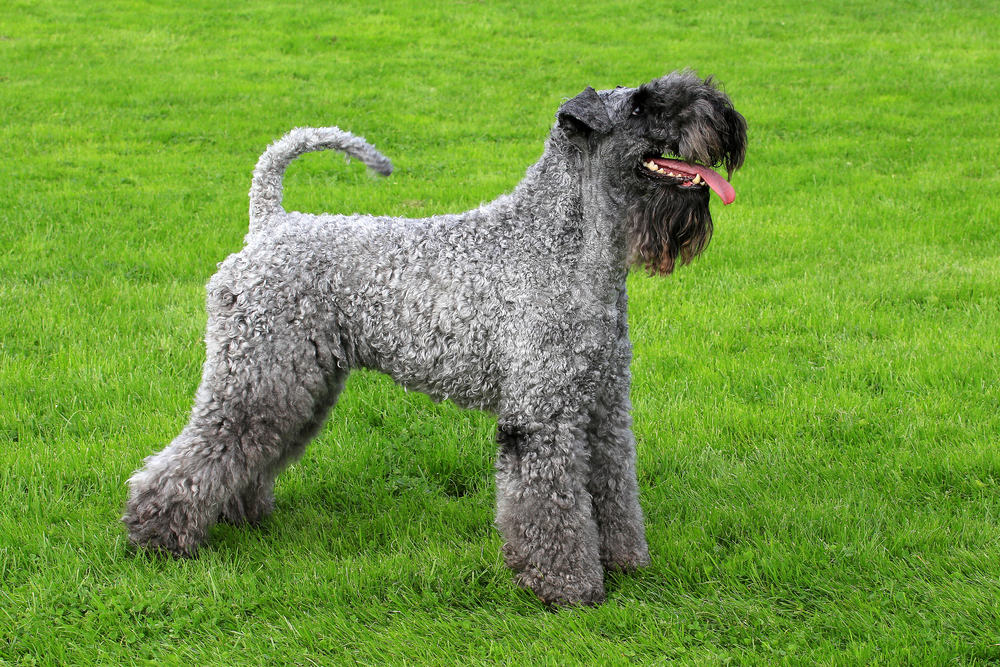 The Kerry Blue Terrier is recognized by all major kennel clubs.

Displays an attitude of alert determination and definite terrier style and character throughout. “Disciplined gameness.”

Head is long and well-proportioned with V-shaped ears and dark eyes showing a keen terrier expression. The neck is clean and moderately long, set on well laid back shoulders. Chest deep, but of moderate breadth.

Legs straight, moderately long and well muscled. Back short, strong and level. The tail is carried gaily erect. The coat is silky soft, dense and wavy, any shade from deep slate through blue-grey to silvery. Colour usually takes 18 months to clear.

Solid black is a disqualification as are dewclaws on hind legs.

The coat is one of the most attention-getting features of this breed. Pus is born either solid blue-black (sometimes a tiny white patch on the chest) or a very dark grey, and their skin, particularly on the back, is blue.

As they grow, the coat begins to “clear” or lighten toward the mature color. Often a brownish or tan tone appears during the clearing process; this is normal and will usually disappear as the pup matures. The standard specifies that the coat should clear by 18 months; prior to this a tan tone or solid black will be tolerated in the breed ring.

Despite the specification that mature color should be reached by 18 months, many Kerries take longer to clear and may not reach their final color for 2 or 3 years. Darker points on the legs, tail, and head can occur and are acceptable as long as the darker coloration does not extend down the neck from the head.

While any shade of blue-grey is permissible, many breeders aim for a medium blue. The very light, silvery coats tend to have poor texture; they are often cottony and lack wave. These coats also grow more slowly.

At the other extreme, the darkest dogs often have excellent coats; extremely dense with good texture and wave. However, solid black is a disqualification and many judges favor medium toned dogs. 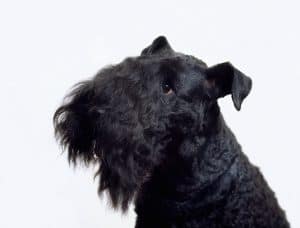 In the morn, they herd the cattle; at noon they come in and tread the wheel to churn the butter; in the afternoon they herd again and after supper are turned out to guard the sheep, the chickens and geese, and pigs.

The last thing that they do before going to bed is to take off the pants of an Irishman.

an Irish Kerry breeder writing in a 1924 magazine, quoted by Montgomery.

The Kerry Blue Terrier (also known as the Irish Blue Terrier in Ireland) is one of three closely related, long-legged, all-purpose working terriers which were distilled from the great mixture of coat colors, textures and dispositions that were found throughout the Irish countryside over the last few centuries.

The Kerry’s two Irish cousins are the Irish terrier and the Soft-Coated Wheaten Terrier; the latter is often considered an ancestor of the Kerry Blue.

Forbidden by law to own the ancient Irish wolfhound (that privilege was reserved for the aristocratic class), the crofters concentrated on breeding terriers to their own needs and tastes.

These farm dogs needed to combine herding, guarding, hunting, retrieving and vermin destroying talents. They were also family members who played with and watched over the children and curled up at the hearth.

Crosses between various groups of dogs including hounds were made to obtain these traits and it is likely that a fair amount of Irish wolfhound blood ended up in the terriers.

A popular story told of the Kerry is that during the invasion by the Spanish Armada, a small spaniel with a soft blue-grey coat swam ashore from a shipwreck and mated with the native terriers, producing offspring with terrier form and a soft bluish coat.

Other variations of this story cast the invading dog as a blue-colored Russian terrier from a wreck in Tralee Bay and as a Portuguese water dog from a Portuguese trading ship.

The Kerry as a distinct breed showed up slightly later than the Irish and Wheaten, emerging in the notes of dog enthusiasts in the latter part of the 1800s.

Although the Wheaten is considered one of the more direct ancestors of the Kerry, most Kerry sources claim that the race of blue terriers with soft coats was present for several centuries, particularly in the south-west Irish county of Kerry and its environs.

Kerries were first at shown in England in the early 1920s and were recognized by the Kennel Club in 1922. The first Kerry Blues in North America were five pets imported in 1918-9; the breed first appeared at shows in the very early 1920s.

Kerries have been used for retrieving small game and waterfowl, for herding sheep and cattle, as police dogs in the United Kingdom, and as guard dogs at UK military installations during the Second World War.

“The Kerry just isn’t everybody’s dog – he’s too smart for that. If you don’t understand him or don’t accept him as one of the family, then he just doesn’t turn on that personality for which he is famous.

“To like a Kerry, you’ve first got to like the Irish, for a Kerry is very much a part of his native land. The only Irish custom I’ve so far not seen in the Kerry is the smoking of a clay pipe. He has all the other traits: the rare blarney humor, the facile wit and the blazing temper.”

“Uncertain, submissive, over-loving and demanding people have trouble raising this breed. It is necessary to know and enforce firmly and kindly your expectations of the dog.”

Kerries are usually not picky eaters. Feed premium quality food for good coat condition and lasting health. Breeders will supply detailed information from their experience. Dry food is the most convenient since there is less tendency to gum up the whiskers. Tartar formation is also reduced with dry food. 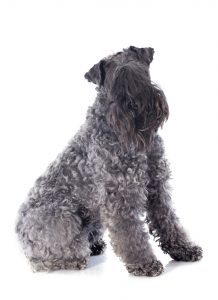 Kerries have extensive grooming requirements, comparable to the amount needed for a poodle. Weekly brushing is essential and daily brushing is ideal to keep the coat and skin in top condition and free of mats.

Bathing and trimming are required about every 6-8 weeks. The coat may be either clipped or scissored; the latter is usual for conformation showing.

The Kerry books cited below and most good multi-breed grooming books describe the proper cut. Choose a professional groomer carefully – many are unfamiliar with Kerries and the dog will end up looking like a Schnauzer.

The Kerry Blue has a moderate exercise requirement. A fenced yard where he can run is ideal. This should be supplemented with daily walks. Kerries are enthusiastic retrievers and love to play ball and frisbee, making them easy to exercise even in limited space. Most love to swim, too.

Start early; get into a puppy kindergarten class as soon as shots are completed. Sixteen weeks not too early, but start with a flat buckle collar at this age, not a chain or nylon slip (“choke”) collar.

Use motivational, positive reinforcement training – the Kerry stubborn streak and intelligence will respond best to training if it is made to be “worth her while” and the instinctive desire to please is appealed to. Lessons must be short and fun for both dog and trainer or the Kerry will become bored.

A Kerry’s grasp of what is required is often intuitive, and training can proceed remarkably quickly. Kerries do well at obedience work; heeling can be the most difficult exercise to train.

Many Kerries have earned their U.D. title and some have acquired the T.D. title. Kerries have also participated in agility and flyball.

Although their preference is to accompany their packmates, Kerries are flexible, adaptable dogs that can integrate into families where everyone works outside the home during the day.

This sort of relationship will require extra dedication from all family members to interact with the Kerry when they are home – exercise, play, training etc. Discuss the matter with the breeder and have them assist in selecting a pup with the correct temperament for this lifestyle.

An adult Kerry may be advisable for people who cannot come home during the day to care for a pup.

Crate training is highly recommended. The Vari-Kennel 300 or 400 are appropriate sizes.

Kerry Blues are typically healthy dogs that remain active all their lives. The life-span of the Kerry ranges from about 10 to as much as 18 years and averages about 13 years. Inherited medical problems are infrequent and are usually not life-threatening.

Details of medical conditions that have been reported in Kerries are listed below; in general, these conditions are uncommon unless otherwise indicated.

No. The Kerry Blue terrier is an uncommon breed and is not often seen outside of dog shows. He will often attract a great deal of attention in public.

Are Kerries good with kids?

Yes. They love kids and their rough-and-tumble games. Kerries are sturdy and well-muscled and are not easily injured. Their tolerant good-nature keeps them from becoming grouchy or snappy.

It’s a good idea for older children to attend training classes with the dog to ensure that the terrier does not regard the child as its subordinate.

Are Kerries good for people with dog allergies?

Maybe. There is no such thing as a non-allergenic dog. But because Kerries are non-shedding they are sometimes recommended to people with allergies and they may actually be more tolerable than a shedding breed.

However, allergic reactions are unique to each person. The sufferer should spend as much time as possible with Kerries in the dogs’ living quarters to determine if the breed is suitable before taking one home.

Yes. They have business-like barks to alert their owners of visitors (or prowlers) on the premises. A full-grown Kerry barking at the door is an imposing sight.

Do Kerries fight with other dogs?

A Kerry can be trained to mind his own business, but he will not back down from another dog if he is attacked. Early training and firm, consistent handling will prevent problems in most situations, but it is best to have only one intact male Kerry in the household.

Some Kerry experts advise having only one male in the household, period, regardless of whether or not he is neutered.

Are Kerries yappy or destructive?

Most Kerries do not bark as a hobby. They tend to reserve their barking for warning and welcoming. Because they are terriers, Kerries have digging instincts.

Digging can be minimized or eliminated with training and by keeping the Kerry exercised and entertained. Kerries also have strong jaws. Divert their chewing instincts to sturdy chew toys.