Home » Breeds » Golden Retrievers vs. Labradors: Which dog is the best?

The same words are used to describe the Golden Retriever and Labrador. Obedient, friendly, fun, and loving.

It is easy to mistake the two because they are similar in size and share the same features. Both are known for having soft mouths and webbed feet – yep, they love water! They even share an ancestor.

Labs have been America’s top dog breed since 1991. Goldens have always been top five.

They came from different parts of the world

This might come as a surprise because they look so similar, but both dogs hail from opposite ends. Scotland is the birthplace of Golden Retrievers, and Labradors come from Canada.

They were developed in the 19th century for hunting and retrieving purposes. The ancestor they share is the lesser Newfoundland. Not to be confused with the Newfoundland, it is also called St. John’s water dog.

Used in waterfowl and fish hunting, these dogs were a favorite of fishermen, as were Labradors. Fishermen used them to pull their nets across the ice.

Goldens were used for bird hunting and other land animals. Both breeds are strong swimmers adept at retrieving.

At a glance, it might seem that the only difference between Goldens and Labs is their coat. The Golden has a dense and glamorous coat of gold. The Lab has a much shorter coat, and he has no plumage on his tail.

Upon closer look, you might notice that their build is quite different. While their height and weight don’t vary much, their body shapes are distinct. Goldens have a sleek body and have a narrow snout.

The Lab is muscular, with thick and short snouts and blocky heads. 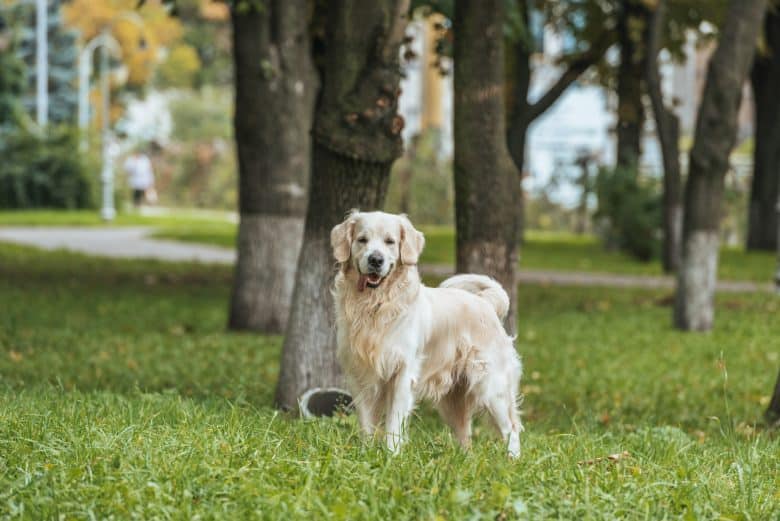 Labs are also known for their expressiveness due to those prominent eyebrow ridges.

But, Goldens have them too. It’s not that obvious, but it’s there.

The chart below shows a comparison between the Golden Retriever and Labrador Retriever.

There are a few variations of Goldens and Labs

You might find that some Labs don’t look the same. Goldens aren’t all identical either. This is because they both have a show and working (or field) variety.

For both breeds, the field class is much more intelligent and active. The show quality pup is usually showier, larger, calmer, and more loving.

Aside from that, Goldens branched out into American, British and Canadian

Each of these variations have their own set of characteristics. Americans are the leanest with long and wavy coats. They usually come in the standard Golden color.

British Goldens have blocky heads and a bit more muscle definition. Their coats are also beautifully thick. Their coats are generally a lighter gold, and some are so pale they almost look white.

Canadians are slightly bigger than the two, but their coats are less feathery. Their thin coats are the darkest amongst the three.

Despite cosmetic differences, their temperaments and personalities are supposed to be the same.

With the Labrador, it’s a little different and they are classed into two categories only

The American Labrador is the working class dog. They are less sturdy than the show dogs. If you’re looking for a companion with super high energy levels and are athletic, look no further.

British Labradors are the show dogs. They are bred with looks and temperament in mind. They are much milder but still very active, but are more suitable to be a house pet.

They are both great family dogs with big hearts. These two fun yet gentle breeds are accepting of people and animals alike.

The Labrador and Golden Retriever are both used as service dogs. They are commonly employed as guide dogs for the blind or deaf and search and rescue.

Canine experts claim that Goldens are much more sensitive than Labradors. Their study says that Labs are a bit thick-skinned and will brush off any scoldings.

Children might prefer the Lab, but these excitable dogs might knock them over. A gentle Golden is better suited for families with very small children.

The Labrador’s zest for life will always leave him wanting more. He might be prone to separation anxiety.

Just watch Stanley as he eagerly waits for his mama to wake:

Goldens are much more chilled out and will entertain himself if left alone. But neither breeds are designed to be left alone. They need to be a part of the family.

Both breeds are easy to train but can become destructive

Golden Retrievers and Labradors are two of the most intelligent breeds. They are easy to train due to their people-pleasing attitude.

Do note that they have physical demands and require lots of exercise, up to an hour a day. Might become over-excitable, or destructive if their needs are not met. Dogs sometimes eat rocks when bored, and this can be fatal. It can cause internal bleeding, or a blocked stomach, and will require surgery.

Neither are great guard dogs. They might alert you with their loud barks, but they are notoriously friendly.

Both have waterproof coats that shed moderately and blow out twice a year. The Golden Retriever has longer and denser coats, and you will find their fur everywhere.

Labs shed just as much, but because their fur is shorter, it might not be so noticeable.

There is no such thing as a short-haired Golden Retriever. If you find one, it is most likely crossed with a Labrador. Since they are so similar and share many characteristics, they can pass off as a “pure” Golden.

Their fur can only be wavy or straight, never curly. Curly coated Golden Retrievers are likely to be mixed as well. 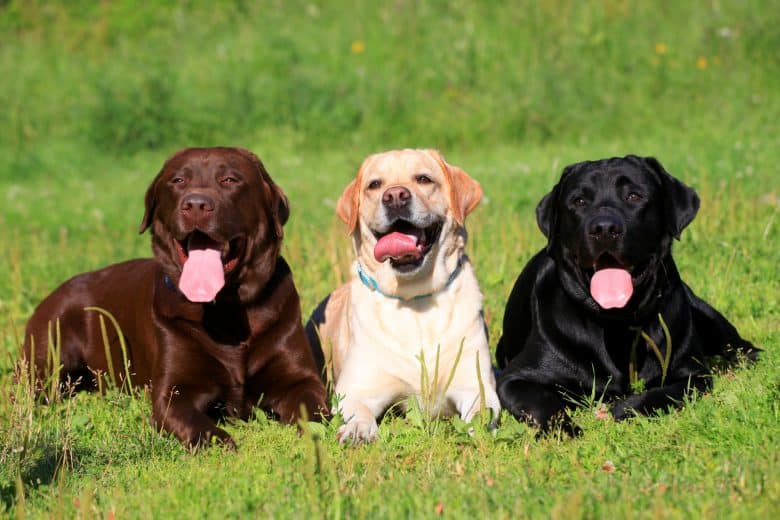 Labs have short fur, and they come in Chocolate, Yellow and Black. The most common are Yellow, and they look similar to light-coated Goldens. Golden Retrievers come in all shades of gold.

How to groom them properly?

Both dogs will need regular brushing with an undercoat rake to remove dead hair.

The Golden will benefit from daily brushings. Special attention should be given to the Golden’s feathery areas. Watch how to do that here:

The Lab doesn’t need any trimming. It only requires a weekly brush.

Due to the Labrador’s shorter coat, they need fewer baths than Goldens. The Golden Retriever’s long flowy coat picks up on dirt much easier when going outdoors. Neither should be shaved for the weather.

Goldens have more health issues than Labradors do 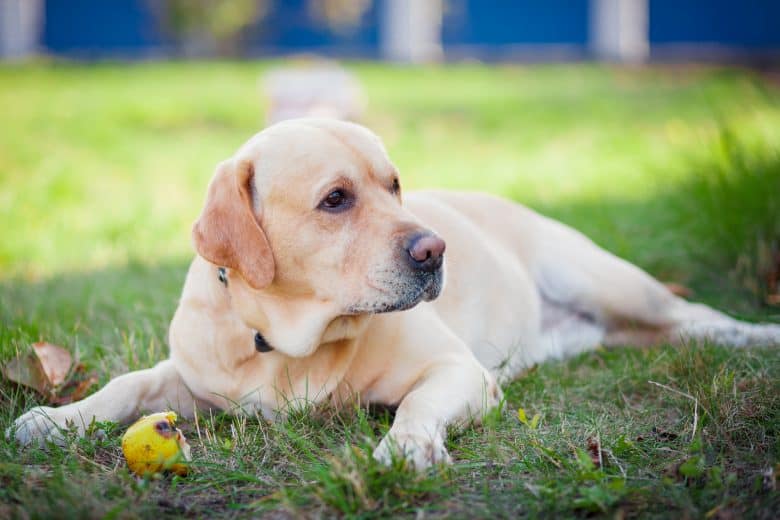 Both breeds are prone to obesity (much more common in Labradors) and gastric torsion. They might also develop elbow and hip dysplasia. These two joint malformations are often caused by extreme exercise or accelerated growth.

They are at risk for progressive retinal atrophy, which can cause loss of vision—also, entropion, which causes the eye to droop.

Exercise-induced collapse caused by heat and overexertion can happen in both breeds. It’s important to pace yourself and your dog. This can be fatal, but most times, it will cause your dog to be temporarily paralyzed from exhaustion.

Muscular dystrophy is a rare disease that manifests in Labs as young as one-month-old. This disease causes muscles to fail until the heart (also a muscle) gives out. The good news is that it is something that can be tested for.

This is why it’s crucial to acquire your puppy from a reputable breeder.

Laryngeal paralysis causes muffled barks or breathing problems. It is an illness that partially paralyzes the voice box and often occurs in older dogs.

Skeletal dysplasia is a mild form of dwarfism which stunts the growth of Labradors. This makes them smaller than their unaffected counterparts. This disease stems from one Labrador back in 1966, which was popularly used as a sire.

Malformation of knees and elbows is also common in Labs.

Goldens are genetically predisposed to cancer. According to studies, 60% of Goldens will develop cancer. The most common types are hemangiosarcoma and lymphoma.

Epilepsy, which causes seizures. Dogs with this condition should not be bred. Not only will it be passed down, but it also complicates pregnancy.

Heart problems such as cardiomyopathy and subvalvular aortic stenosis. These can be managed through treatment. Dogs with heart conditions should not be bred.

This is false; both breeds can vary from $500 to $3000, depending on the breeder and location. However, you can expect to pay more for Show quality dogs or puppies of Champion lines. 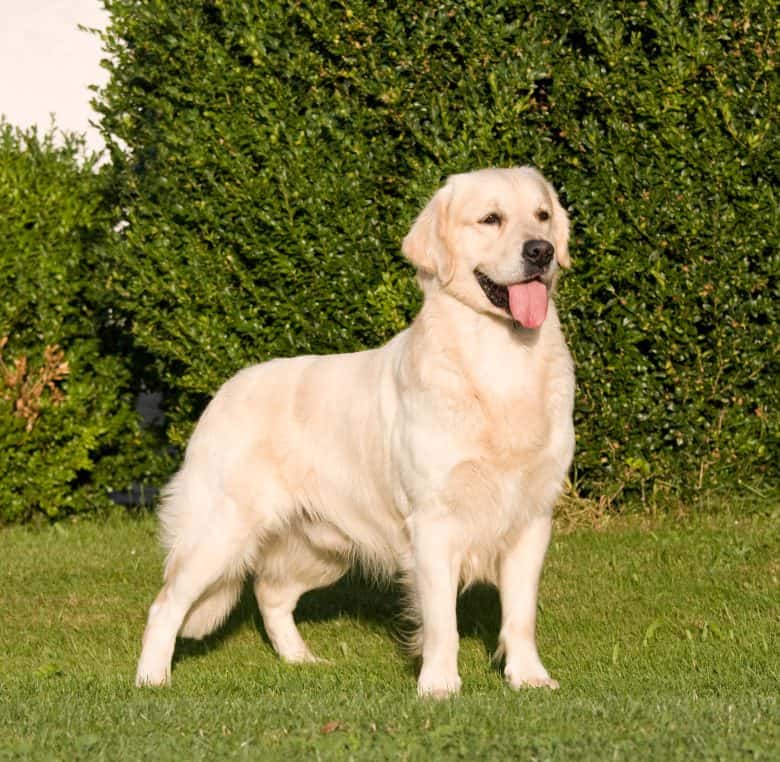 It is important to spend time searching for the right breeder

Backyard or unethical breeders might sell their puppies at a low price.

Reputable breeders might ask for a higher price as they put more effort into their puppies’ care. Quality food, accessories, training classes, and regular checkups all add up.

You can find Goldens at:

You can find Labradors at:

These popular dogs can be found in shelters

It shouldn’t be hard to find a rescue due to their popularity. Goldens and Labs have breed-specific rescues dedicated to them.

You can rescue Goldens from:

Labradors can be rescued at:

Labs and Goldens are so similar, their differences seem to be purely cosmetic. But Goldens are more laid back whereas Labradors have never-ending energy. 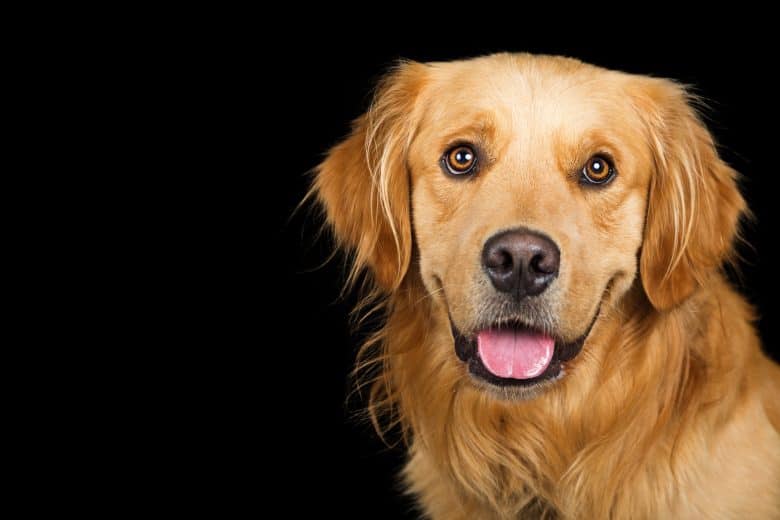 Retirees or families with small children might do better with a Golden. Busy families or active individuals might be more suited for a Labrador. 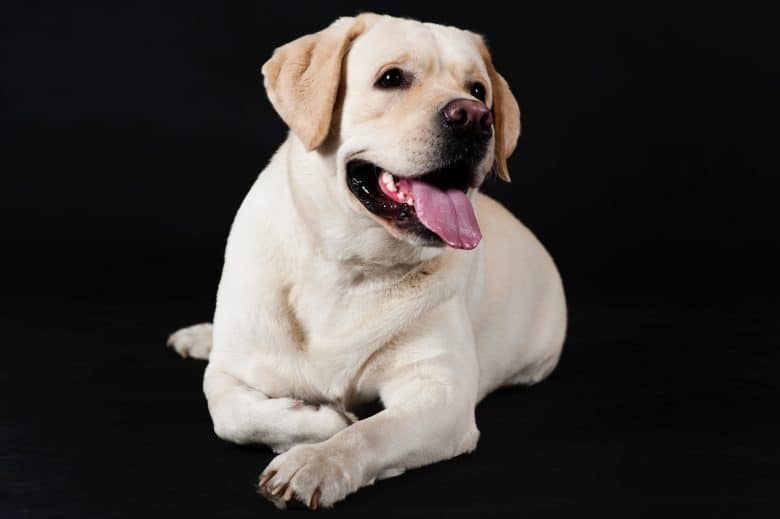 If you really can’t decide, why not go for a mix of the two and bring home a Goldador instead?