One of the newest breeds to be introduced into the United States is the Glen of Imaal (pronounced E-Mahl) Terrier. This breed originated in Ireland, in the glen of Imaal of County Wicklow.

The Glen was developed as a general purpose farm dog, to guard and work stock, eradicate vermin, and to hunt fox, badger, otter, mink, etc. For generations, the farmers bred the characteristics of a large breed into a small frame. This scrappy terrier was developed as a game working dog to destroy vermin. 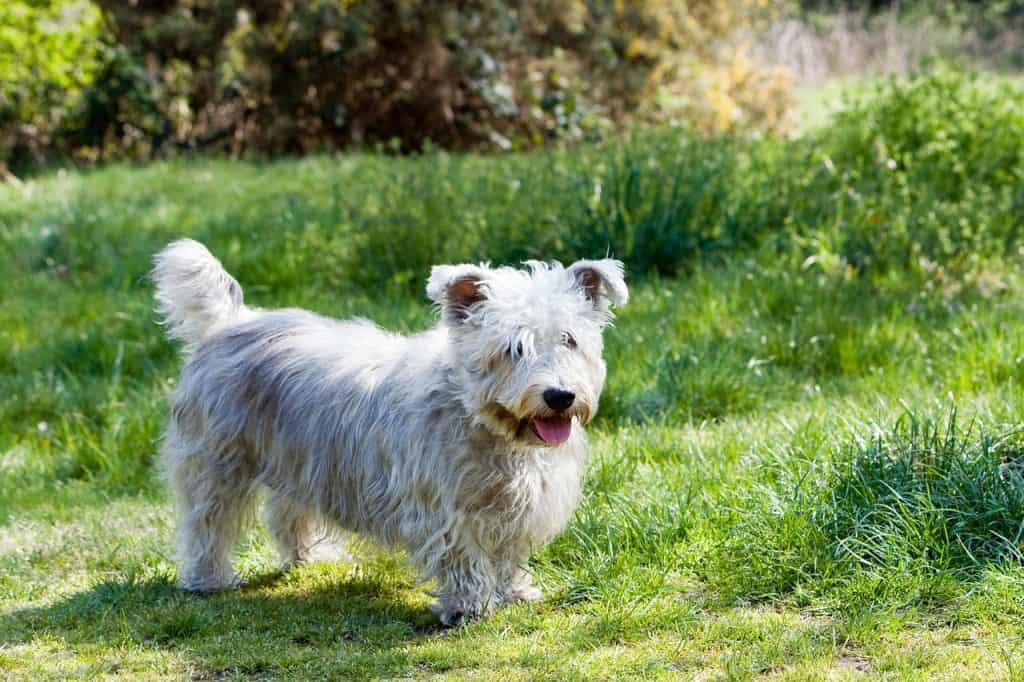 The Glen of Imaal Terrier is quite fearless and impervious to pain when working. He is one of the few breeds of dog that is bold enough to face a badger in its den and bring it to ground.

However, he does possess a placid temperament until his quarters are threatened. He will then let the enemy know that it is not welcome with a deep guttural bark that belies his small size.

These dogs are not known for excessive barking or yappiness, and were disqualified for barking during terrier trials in Ireland.

In spite of his tenacity and courage when called upon, this is a tenderhearted dog devoted to his family. He is intelligent, quick to learn, and quick to respond. The Glen is quite playful at times and this breed does not demand constant attention from its owner.

This breed is known for its intelligence, quickly learning his lessons and perfecting his duties in short order. They tend to always be aware of the whereabouts of their owners and hate to be separated from their families.

Like most terrier breeds, a few puppies will need to be discouraged from nipping and jumping up.

Glen of Imaal Terriers grow only to fourteen inches high at the shoulder, yet should weigh around the standard maximum of thirty-five pounds. Their bone structure is one of the heaviest, they have a bowed front, very useful for digging, throwing dirt to the sides rather than between their legs as do most terriers.

Of all the indigenous Irish breeds of terriers seen today, the Glen of Imaal Terrier is the least identified, still it is the single type bred out of Ireland that is low enough to the earth to enter and challenge the badger in his den.

Whatever the precise date of the inception of the Glen of Imaal Terrier, he always has been typically portrayed as a working terrier and has been bred for this purpose.

Part of his history is also known to have been spent with numerous hours at the dog-wheel as the turnspit. This contraption was a treadmill that rotated the meat on a spit as it cooked.

It was propelled for hours by this energetic little dog. Their small size, low fronts, and strong rears made them ideally matched to this chore, and earned for them the nickname the ‘Turnspit Dog’.

In Dogs in Britain by C.L.B. Hubbard, there is a photograph of a group of Glen of Imaal Terriers and their owners taken in 1933. The animals in this picture are surprisingly similar to the Glens that are found today.

In the years when tests of gameness were still being given in Ireland, the Glen of Imaal Terrier contended for the Teastas Mor, which was the criterion for gameness, along with the larger Irish Terrier, the Kerry Blue Terrier, and the Soft-Coated Wheaten Terrier, he also competed for the Teastas Misneac, the certificate of dead gameness, and positively no member of the terrier breeds could become a champion without this certificate.

During the trial for the Teastas Misneac, after the game, the badger was sent in, the Terriers were released into a winding tunnel. The dog had to find the badger within one minute. He then had six minutes to pull the badger from the hole with the badger frantically defending the other end of the tunnel.

The dog that held the badger and worked it for six minutes without a sound was allowed the certificate of Teastas Misneac. Extensions for a time were given if deemed necessary by the judges under the existing circumstances.

Trials with badgers have long been outlawed and since 1966 the test was no longer required to make up a champion.

Today the Glen of Imaal Terriers’ main sporting is in the back woods when his master takes him for a romp and he spots some movement in the bushes. Woe for most small and medium-sized game, for the Glen, is quick with his strong forefront and powerful jaw and is not likely to give up when being defended against.

Nowadays the dogs are mostly housed as domestic family pets, although there are quite a few are still working terriers keeping the farm and hearth clear of all vermin. They are today still endowed with the many traits with which they served their owners long ago.

Before the Glen of lmaal Terrier became recognized at dog shows, he had already developed into the tough, strong, sturdy dog that we know today. This stout hardy breed had to hunt badger, fox, and rat. It has not been unheard of for the Glen to head into the water after otter or mink.

The Glen of Imaal Terrier was certainly the last of the four terriers to gain recognition upon his native soil. The Glen was first recognized by the Irish Kennel Club in 1933, making it into the show ring in 1934. The current I.K.C. standard was approved in 1995 and they are now known as ‘The Irish Glen of Imaal Terrier’ there.

In the United States, shows and registrations are done by the Glen of Imaal Terrier Club of North America, the States Kennel Club, and the United Kennel Club which recognized them in 1994. They can also be seen at American Rare Breed Association’s shows, however, they do not register them.

Grooming is minimal. Glens have a double coat with a harsh outer coat and a soft undercoat that is easily cared for with occasional brushing. If you are not going into the show ring, simply give them a good brushing once a week or so.

The coat grows to 3-4 inches in length. This is a breed that does not shed when the hairs reach their maximum length, they will be removed during regular grooming sessions.

You must, however, keep an eye on the ear canal as this breed does grow hair down the ear channel. This hair needs to be plucked out regularly or you will be troubled with ear infections.

Preparation for the show ring is also minimal. To keep a nice harsh coat you should not scissor the coat, it should be stripped out on the average every nine to twelve months, depending on the length you want to keep it at.

Always remember that a Glen should NEVER be over-groomed and should keep the natural rough-and-ready appearance.

The Glen of Imaal Terrier loves to exercise, yet they are usually calm inside the smallest of apartments, provided they are regularly allowed to stretch their legs. They can easily go for very long walks.

The Glen does not have any known genetic disorders. However, there are some Glens who suffer from ‘terrier skin’. This will result in hot spots or extreme scratching. This does not usually show up until the dog is sexually mature. As this can also be attributed solely to the dog’s environment, it is difficult to track it or classify it as genetic.

In the event of a problem with itching, a diet of a dry lamb and rice food is first recommended, followed by a biotin supplement, with the last resort of cortisone treatments. This is NOT found in the majority of Glens.

Since this a long backed breed, in considering a puppy purchase, they should not be overlong, nor sway or roach backed. The crooked front refers to the front legs. They should turn out only slightly and should not be exaggerated.

Glens like to eat and get fat easily. Keep treats to a minimum and give them lots of exercises to keep them in shape.

Is that a purebred?

Yes, the Glen of Imaal Terrier is a purebred terrier from Ireland. They have been referred to as ‘short legged terriers’ as far back as 1575.

Technically, yes, in reality, no. A well-groomed Glen will not shed, the hair stays in the follicle until it is combed or pulled out. If the dog is not combed at least once a month, small amounts of hair will be left on the furniture. Excessive scratching will also leave traces of hair behind.

Are they good with kids?

Yes, they’re great with kids, although they will jump up and some can be nippy. They are better with school age kids because they like to play rough and will knock smaller ones over.

They love to chase balls and sticks and wrestle. They are not delicate and love to roughhouse.

How are they with other dogs?

Typically they get along well with other dogs, however, they do not like to be dominated too much. They will take some domination, preferring to just get along, but they will fight with over aggressive dogs.

How are they with cats and other household pets?

Remember, they are terriers and it is their natural inclination to chase and kill small rodents. They can get along with cats IF the cat was there first and IF they are constantly watched and disciplined if they show any intention of harm.

I also recommend that the cat has an area accessible to it to get away from the dog. As for other pets, the dog should not be trusted alone with them.

Absolutely, yes. It is natural for them to do so and it would be difficult to suppress that.

Either is fine. The temperament is the same in either, males tend to be larger. 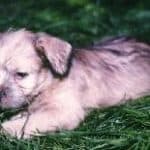 How difficult is it to find a puppy?

Not too bad, of the few breeders in this country, waiting tends to be less than a year.

What should I look for in a breeder?

References, mainly. Most of the time you will have a pup shipped sight unseen since there are only a handful of breeders in this country.

Ask for photos of the sire and dam, photos of other progeny if available. Watch out for ‘puppy mill’ mentality, where there are lots of pups available all the time.

What should I expect to pay for a Glen?

What makes a Glen ‘pet quality’?

Too much white, or white on the head or back. Yellow eyes, pink or brown [instead of black] nose. Square silhouette, or the anticipation they will be too tall.

Are they good watchdogs?

Yes and no. They strive for your approval. If you praise barking, you’ll get it. If you discourage it, you won’t. Generally, though, they will protect you if they believe you are being harmed.

Are they good in obedience?

Yes, again, they want to please you and receive affection. Choke chains are not really effective, but profuse praise is. They are highly intelligent and if you are not persistent and consistent, the training will show it.

Are they registrable with the AKC?

No, not at this time, and it is not something that is being pursued by fanciers of the breed at this time.