Home » Breeds » Everything You Need to Know About Siberian Husky Colors

If you’re thinking Siberian Huskies only come in a handful of coat colors, think again. These canines’ coats are just as varied as their wily personalities!

Whether you prefer majestic black dogs or copper-coated red pups, there’s a Husky out there for you.

Siberian Husky fun facts: Get to know this impressive breed

Ancient sled dogs, Siberian Huskies were bred to pull light loads on long-hauls across icy terrain. Created by the Chukchi people of northern Siberia, Huskies are no strangers to enduring harsh weather.

Huskies are more than just working dogs, however. The Chukchi also viewed them as companions and developed the breed into the quintessential pack dog.

When they came to the US, this purebred’s sled-pulling capabilities rocketed them to fame in Alaska.

But it wasn’t until Husky-led sled teams delivered life-saving medication in record time during a 1925 diphtheria outbreak that the breed rose to stardom.

Today, Siberian Huskies are still considered one of the most beloved canines around. Their spunky spirits, sense of mischief, and true loyalty make them a top choice for families and singles alike.

Huskies are so popular that they’re even bred in two sizes now! There are Standard-sized Huskies and Miniature Huskies.

While Mini Huskies typically aren’t as healthy as Standard Huskies, both varieties come in the same range of coat colors. And there are far more color possibilities than you may think!

Have you ever noticed that the Husky has incredible wolf-like features? There’s a good reason for that.

Huskies are one of the oldest dog breeds in existence. They still have genetic links to a type of Siberian wolf that lived over 35,000 years ago. We don’t know about you, but we think that’s pretty impressive!

Even today, we can see their wolf ancestry in their coat’s colors and texture. The shades, markings, and patterns on the modern Husky all harken back to their great-great-granddogs of yore.

In addition to coming in multiple sizes and fur colors, Huskies also bring two distinct coat types to the table.

Both the standard coat and wooly coat are dense and warm. Each variant features a thick undercoat with a lush topcoat.

The undercoat and the outer coat are like guard hairs that work together to keep Huskies safe in extremely cold climates–even in temperatures as low as -76°F (-60°C)!

The key difference between these coat types is the length. Wooly coats are longer and appear fuller than standard coats. Wooly Huskies are frequently confused with Alaskan Malamutes.

That added fur might seem helpful for a sled dog, but it can actually be a hindrance. For starters, long, wooly coats can trap snow and moisture.

Not only is this uncomfortable for your dog, but it can be downright dangerous in freezing weather.

It’s also worth mentioning that longer hair is considered a fault according to the AKC breed standard. If you plan to show your dog, look for a Siberian with a standard coat.

Patterns and Coat Colors of the Siberian Husky

The AKC breed standard is pretty lenient when it comes to the Husky’s fur patterns and markings. And it’s a good thing, too: each part of the Husky’s double coat can be a different color.

Dilution factors, age, and even sun exposure can affect coloration, too. 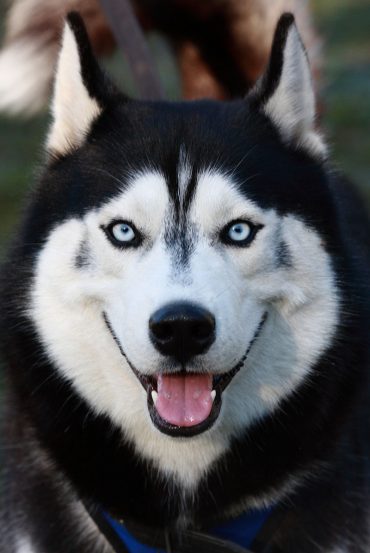 To keep things simple, let’s think of the Husky coat colors in two main categories: common and rare. Black and white Huskies, for example, are arguably the most popular.

You might see a jet black Husky, with a solid black guard coat and dark-colored undercoat. They often have black paw pads and even black markings on the roofs of their mouths.

Black Siberian Huskies, interestingly enough, don’t just have coal-black hairs. Slightly lighter than jet black Huskies, those with black coats can have paler undercoats. They may also have flecks of white at the roots.

And then we have our dilute black Huskies. While the tips of their guard hairs are black, with black fur on their heads and backs, their undercoat appears white in contrast.

These dogs are truly two-toned, distinguishing them from the jet black and black Siberians.

Next up are the gray and white Huskies (also called the grey Husky). Wolf gray Huskies tend to have blends of beige, tan, and red.

This mixture of colors is often confused with sable, but wolf gray Siberians have deeper tones than sable. 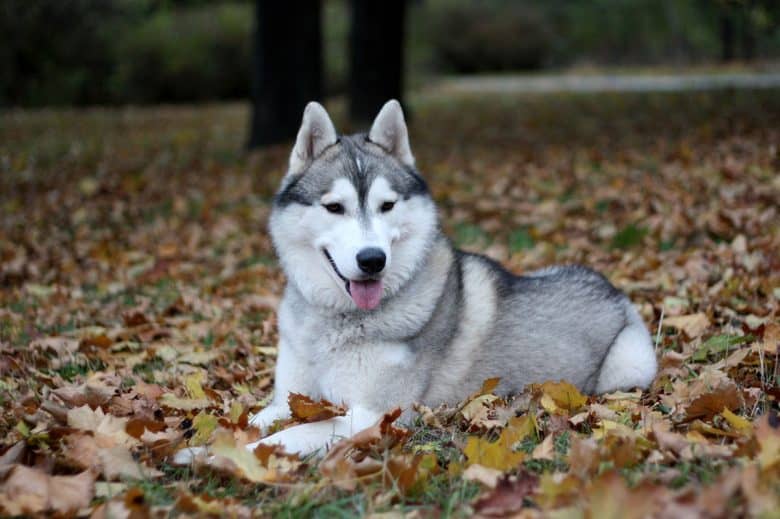 Silver Siberian Huskies have a white undercoat with black tips on the guard hairs. They almost look like a diluted grey, with a silvery-blue hue.

You’re probably most familiar with the medium-dark grey Husky. They often look like a combination of the wolf grey and silver coats.

Red and white Siberian Huskies come in shades of oranges, coppers, light reds, and dark reds. Sporting liver points and a cream-colored undercoat, they look quite different from black and grey Huskies. If your red Siberian has black points, they’re considered sable and white. With their red undercoat and black tipping, their fur is quite distinct.

Sable Huskies are hard to find and are often born with grey coats. Over time, their coats deepen into the characteristic black-tipped red.

The tips of agouti Husky coats are black, often with black masks on their faces. It’s easy to see how agouti Huskies can be mistaken for real wolves!

Considered the rarest of all Siberian coat colors, the white Husky has snow-colored fur, thanks to recessive genes that remove pigmentation from their coats.

Some have slight hints of yellow in their coats, while others are stark white. Either way, this exotic Husky is striking, especially with those captivating Husky eyes!

Other recognized colors of the Siberian Husky

Did you think those were the only Husky colors? Of course not! Additional possibilities include:

Huskies usually have masks and saddles, but not always.

Pinto Siberian Huskies appear to have a white marking that goes from one front paw, up over the shoulders, and down the other front paw. Some even have adorable half-masks, just like a superhero!

Piebald Huskies have white coats with patchy splotches of darker colors, like blacks or reds.

Both of these coat patterns are fairly rare–and eye-catching!

1. What’s the difference between mask and body fur colors?

Many Siberian Huskies have masks or color markings on the face that resemble–you guessed it–masks. These masks are usually lighter than their body fur, but not always.

2. Will my Husky’s markings change over time?

It’s possible! Husky fur may get darker from puppyhood into adulthood. You can see a good example of this with Jenna, the Husky puppy.

As Huskies continue to age and reach their senior years, their markings may get lighter again as gray hairs grow around the eyes and muzzle.

3. Why do some Husky puppies get lighter in color?

Just as some Husky pups grow darker with age, some grow lighter. It all depends on their genetics. If your puppy has a mask, that could change, too. It might get lighter or go away completely!

Did you know adult Siberian Huskies change color, too? Usually, adult Huskies are darker in the winter and lighter in the summer. You can thank seasonal shedding for the chameleon-like transformation.

5. Is shedding the only reason full-grown Huskies change color?

Nope! If your Siberian often basks in the warm glow of the sun, she might develop a golden undertone. This metallic sheen might fade over time, or it could become a permanent fixture of your Husky’s coat.

Are Husky colors linked to health?

You’ve probably heard that some coat colors are associated with health risks. Double merle coats, for example, are notorious for coming with a host of genetic issues.

“Double merle” means that both parent dogs carry the merle gene. It may not sound serious, but double merle puppies can be born deaf, blind, or both. Some are even born with missing eyes.

Similarly, brindle Huskies may be at greater risk for vision and hearing loss. They might also experience immune system disorders.

While these conditions aren’t always severe, they do hinder your pup’s quality of life. Huskies born with these coat colors may also come from less-than-reputable breeding operations.

In fact, the Siberian Husky Club of America (SHCA) suggests that these pups may not even be purebreds.

If a breeder is willing to jeopardize a puppy’s health just for aesthetics and they’re eager to pass off the pups as purebred Huskies when they aren’t, is that really a breeder you want to shop with? We didn’t think so. 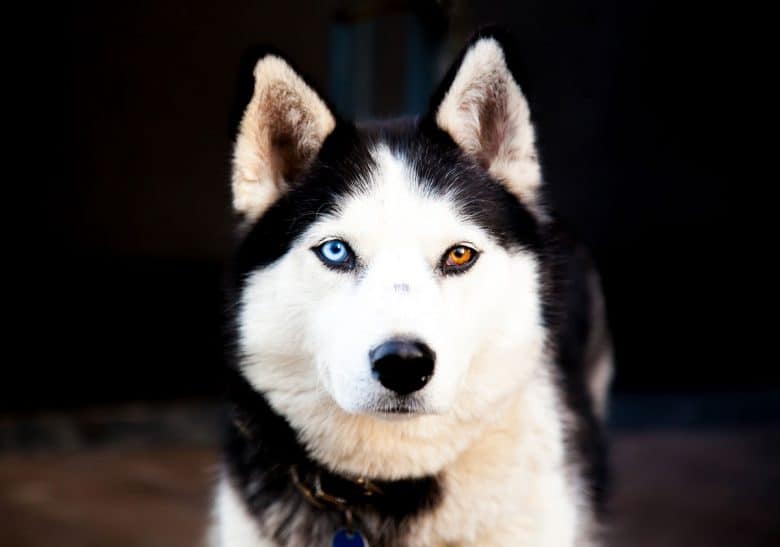 What are the different Husky eye colors?

A Siberian Husky’s eye color can be just as unpredictable as their coat.

Blue eyes and deep brown eyes are two of the most common Husky eye colors. Pure white or red and white Siberians could have very light brown or amber eyes.

You may even have seen a Husky with two different eye colors. This condition, called heterochromia, is rather eye-catching (see what we did there?).

Perhaps the rarest possibilities are parti- and split-eyes. Parti-eyed Huskies have a predominant eye color with spots of another color sprinkled across the iris. Split-eyed Siberians have eyes that are half one color, half another.

Taking care of your Husky’s coat

With all this talk of eye and coat colors, it’s important to mention grooming, specifically, taking care of your pet’s hair.

You should brush your Siberian Husky’s fur at least a few times a week. When they’re blowing their coats and shedding increases, up the grooming frequency to once a day.

Invest in a good undercoat rake and bristle brush for your Husky. Be careful with deshedding blades, and avoid clippers and razors.

Some deshedding tools work too well and can damage your Husky’s coat. Similarly, shaving the Husky coat can do far more harm than good.

Which Husky color will you choose? 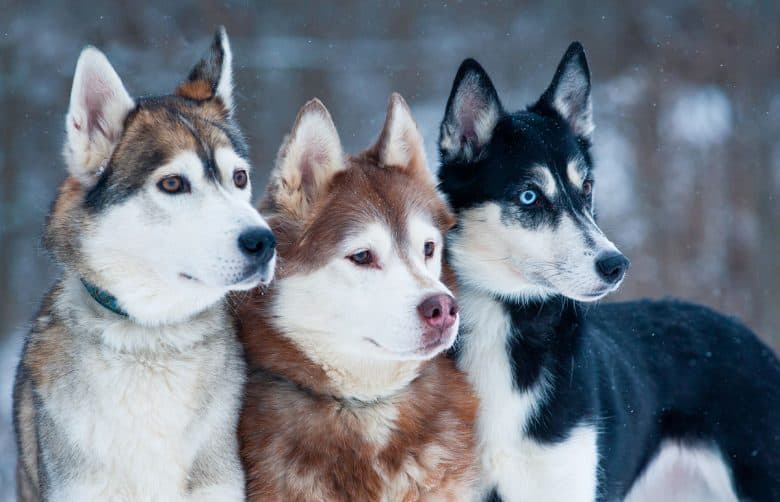 Siberian Huskies come in multiple shades, patterns, and markings. They even change color from time to time, either with age or with the seasons.

If you thought Huskies only came in black and white, boy, did you just get an education!

Now that you know all the different Husky colors out there, which one is your favorite? What color does your pup or Husky rescue have? Tell us in the comments!