A favorite breed amongst families, Golden Retrievers are loved for their intelligence, friendliness, and loyalty. In fact, they are so loved they are ranked 3rd in popularity by the American Kennel Club.

If you’re thinking about getting a Golden Retriever, you will want to know that your beloved pooch is going to be around for years to come. Keep reading to find out how long Golden Retrievers live.

How long do they live?

Although Golden Retrievers often retain their puppy-like qualities throughout their life, these dogs officially reach adulthood at around 15 months old.

Today a Golden Retriever lifespan typically sits between 10 and 12 years, however until as recently as the 1970s these majestic dogs lived as long as 16 or 17 years.

While no one knows quite why the life expectancy of the Golden Retriever has decreased over the years, the Morris Animal Foundation is trying to find out exactly why. The foundation began a study in 2012 with over 3,000 purebred dogs partaking in the study’s observation.

The goal is to study these Golden Retrievers over the years to discover exactly what is affecting the decline in life expectancy for this breed. The study includes a 50-50 split of male and female Golden Retrievers, with half the dogs being fixed, and the other half not.

The study, which will be the longest and largest survey of canines ever done, is still going to take about another decade to complete, although certain preliminary results have been released concerning cancer in this breed and a number of other factors that affect the lifespan of the Golden Retriever.

The oldest Golden Retriever on record

A Golden Retriever from Tennessee named August was born on the 24th of April in 2000. Today August, or “Augie” as she is affectionately called by her owners, turned 20 and is the oldest Golden Retriever on record.

Augie is a true success for rescue dogs, as this loved Golden Retriever was adopted by her current owners from Southern Nevada’s Golden Retriever Rescue, at the age of 14, after she had already been adopted twice previously.

Like most aging Golden Retrievers, Augie’s faced as turned from yellow to a grey-white color. However, despite her age, which is the equivalent of 114 human years, Augie is still quite active.

At 14 she was diagnosed with kidney trouble but her diet of wet and dry Hill’s Prescription, along with some additional supplements for kidneys and joints, keeps her fit and healthy!

Meet Augie in this video:

What do most golden retrievers die from?

According to the study done by the Morris Animal Foundation, about 60% of Golden Retrievers are impacted by cancer, leading to this disease being the top cause of death for this breed.

While genetic factors will have a role in the Golden Retriever’s predisposition to certain types of cancers, most of these dogs die from bone cancer, lymphoma, and blood cancer.

Death from cancer is more common in Golden Retrievers than any other canine breed.

Spaying or neutering Golden Retrievers too young can allegedly increase the risk of certain types of cancers in this breed.

In fact, a 10-month-old Golden Retriever that was diagnosed with uterine carcinoma became the youngest dog ever reported to have this cancer of the uterus.

In addition, Golden Retrievers are also prone to skin cancer as their light coloring makes them susceptible to sunburn.

How to prevent cancer in Golden Retrievers

While your Golden Retriever may be more likely to get cancer than other breeds of dogs, there are a few things that you can do to help prevent this from occurring.

The first step to ensuring a healthy adult Golden Retriever is in choosing a puppy whose parents have had proper health checks so that your puppy is not predisposed to certain genetic conditions.

While there has been a link between fixing your dog and the early development of certain cancers, spaying and neutering a dog can also have its benefits.

A link between cancers, cardiomyopathy, and other deficiencies in Golden Retrievers and a commercial grain-free diet is also evident.

It is important to keep your dog on a healthy diet that includes some good supplements such as Omega 3 fatty acids to which help to reduce inflammation and glucosamine and chondroitin which assist joints.

In addition, ensuring your Golden Retriever is lean and well-exercised can decrease hip and joint problems later on in life, as well as reduce their risk for cancer.

When exercising your dog outdoors you may also want to apply a doggy sunscreen to your Golden Retriever’s nose, ears, tummy, and face to reduce the risk of your dog getting skin cancers.

When running outdoors with your dog do take care to avoid insecticides, pesticides, and other toxins which can also increase the risk of cancer and be sure not to let your Golden Retriever chew on chemically treated objects.

Also, schedule regular vet check-ups for your Golden retriever throughout its life. If diseases and cancers can be caught early, there is more chance that something can be done about them.

While cancer is the main cause of death in Golden Retrievers, there are a variety of other health concerns to be aware of in this breed.

This dog does not do well under stressful situations, and Golden Retrievers that are left alone for too long or excluded from family activities can develop a variety of stress-induced chronic conditions.

Stress in a dog leads to the release of cortisol and adrenaline which can negatively impact health and lead to a weakened immune system, loss of appetite or diarrhea, and urination problems. 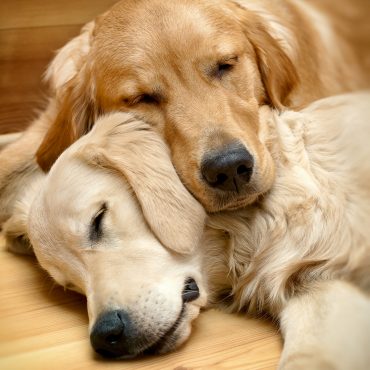 About one-third of these dogs also get some form of skin disease or ear infection early on in life and so regular grooming is a necessity for these excessive shedders.

Like most big dogs, Golden Retrievers are also prone to hip and joint problems.

While this health issue might not lead to death, reduced mobility can greatly impact the quality of life of your Golden Retriever.

Lots of exercise and a good diet will help to limit the impact of joint problems in this breed.

Some other diseases to be aware of include hypothyroidism, eye disorders, mast cell tumors and seizures.

While a variety of factors can influence the overall health of your dog, including their genes, sex, and environment, we know that there are few things we can do to increase the lifespan of our family pet.

Regular grooming will help limit skin conditions while cleaning their teeth helps prevent gum disease. Maintaining a healthy weight through the right food and regular exercise will ensure your dog doesn’t get obese.

Taking your Golden Retriever to obedience school and training and dog-proofing your house, as well as supervision and attention, will reduce stress levels, minimize separation anxiety, and also reduce your dog’s risk of injury.

How the Golden Retriever lifespan compares to other breeds

The Golden Retriever’s lifespan is roughly the same as other large breeds. Labradors also live for about 10 to 12 years, while German Shepherds and Great Danes have a life expectancy of between 7 and 10 years.

Typically larger dogs don’t live as long as smaller dog breeds, with scientists saying that a dog’s lifespan is reduced by one month for every 4.4 pounds of body weight. For example, the tiny Yorkshire Terrier has a life expectancy of around 11 to 15 years.

However, this is not always the case as is the example of the Border Collie who at half the weight of a Golden Retriever also has a life expectancy of between 10 and 12 years.

Long may your Golden Retriever live

Before getting a Golden Retriever you need to be aware that caring for a pet is a lifelong commitment.

While these dogs do get cancer more than any other breed of dog, there are lots of things you can do to ensure your Golden Retriever lives as long as possible.

Do you have a Golden member of your family? Let us know how old they are in the comments below.