Also known as the Golden Chowtriever, the Golden Retriever Chow mix is one of the hidden gems of the crossbreeding world. It’s one of the fluffiest, most adorable dogs you’ll ever see. Read on to find out all the essential info on this hybrid, and whether it would be a good fit for your family and lifestyle.

Where does the Golden Retriever Chow Mix come from?

As with any other designer dog, the origin of the Golden Retriever Chow mix is unknown.

At some point in the past 20 years, people decided to mix the Golden Retriever and Chow Chow, which resulted in the Golden Chowtriever – a fierce but loving crossbreed.

To fully understand this crossbreed, we can learn more about the traits it can inherit from its parents. 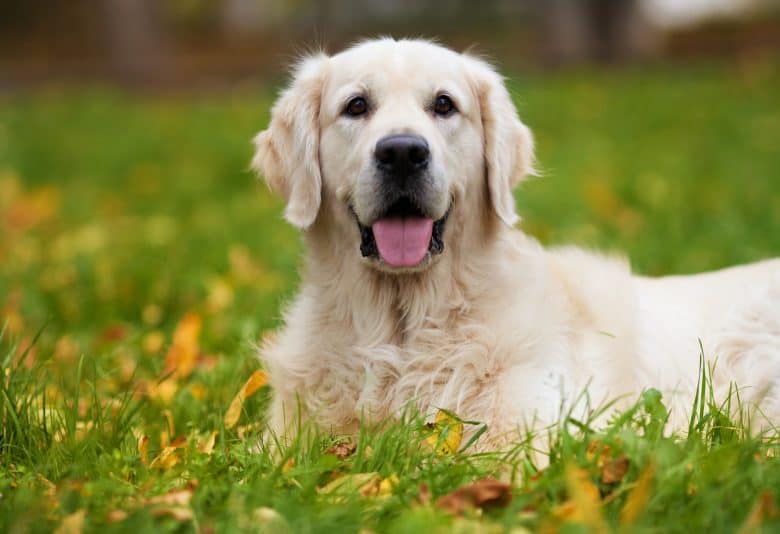 Golden Retrievers were bred as hunting dogs in mid-19th Scotland. They were exceptionally good at retrieving waterfowl without damaging the game, thanks to their soft mouths, which made them the top choice for many hunters.

As time passed and they evolved, Golden’s started to be viewed more like family members and surged in popularity throughout England.

Fast forward to today, Goldens have taken the world by storm. Their outgoing, playful nature, helped make them the third most popular breed in the US, and the rest of the world.

Yet, this dog offers brains as well as brawns. Being versatile, they’re also used as disability dogs for the blind & deaf, search and rescue, and detection dogs.

They even rank as the fourth most intelligent dog breed in the world — right behind the Border Collie, Poodle, and German Shepherd. So it’s no wonder this breed is being utilized to help humans live better quality lives.

This purebred can be found in three different types: American, Canadian, and English Golden Retrievers.

They’re faithful companions that enjoy an average lifespan of 10 to 12 years.

The Chow Chow originates from northern China and is one of the oldest dog breeds in the world, dating back to 2000 years ago.

This fluffy breed was produced as companions for Chinese nobles, and some dynasties had over 2000 Chow Chows at any given time. They were also bred for their hunting & guarding abilities. 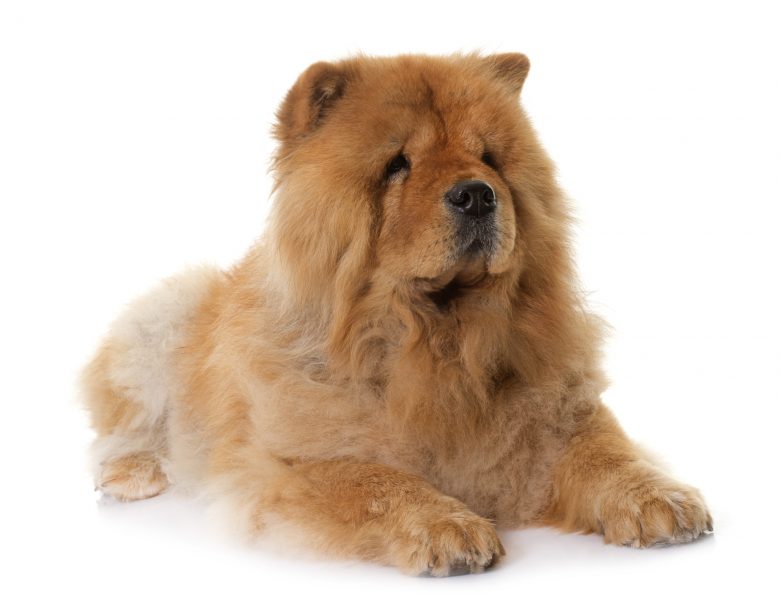 When it comes to its physical appearance, everything you need to know is in its name. Its original name is Sonshi-Quan, which translates to “puffy-lion dog.” They have a sturdy build, a broad skull, and small, triangular ears.

Chows have a very dense double coat with a thick mane around the neck area. Its silky smooth fur comes in a variety of shades – from red to black – but multiple colors are considered outside the breed standard.

Aside from being seasonal shedders, they aren’t excessively active, which makes them an excellent choice for families living in apartments.

This lovable breed isn’t one to pick fights or misbehave as it prefers being a couch potato and snoozing through the entire day.

They have a somewhat longer lifespan – 11 to 13 years.

Unlike its purebred parents, the Chow Chow Golden Retriever mix isn’t recognized by the American Kennel Club (AKC). But there are organizations for designer dogs that recognize this hybrid, like the Dog Registry of America, Inc. (DRA).

There is no standardized appearance for any mixed breed, but generally, the Golden Retriever Chow mix will charm you with its dark eyes and dropped ears.

You can expect a medium-length snout accompanied by a black nose that’s perfect for boop videos or pics! Then at the end of their body is a slightly curved yet puffy tail.

Since crossbreeds are full of surprises, this fido can have the unique tongue color of the Chow. It can be the same black and blue pattern, or it can still be pink with dark spots.

Watch this video of a Golden Retriever Chow mix named Bizkit enjoying beach day! If you look closely, you can even see some dark spots on its tongue:

How big does a Golden Retriever Chow mix get?

Golden Chow’s can grow pretty big both in size and weight and are considered medium-to-large sized dogs. They can reach up to 25 inches (63.5 cm) in height and weigh between 50 and 75 pounds (23 and 34 kg).

So if you live in a condo in the city or an apartment, it’s best to look for a smaller breed. These canines are more suitable for a home that can offer ample space, both indoors and outdoors.

Coat & Color: Are they hypoallergenic?

No, they’re not. Golden Retriever Chow mixes are considered heavy shedders throughout the year.

They have a dense, wavy, and non-water repellent double coat, but they may inherit the Golden’s much puffier fur, which will make them more high-maintenance.

One standardized thing is the color of its coat. The Golden Chow mix can be found in solid colors such as golden, black, brown, red, and blue.

Neither parents are known to be aggressive, but there is quite a significant disparity between their two temperaments. Golden Retrievers are lovable goofballs who live to please their masters, while Chows are more independent and can be stubborn. 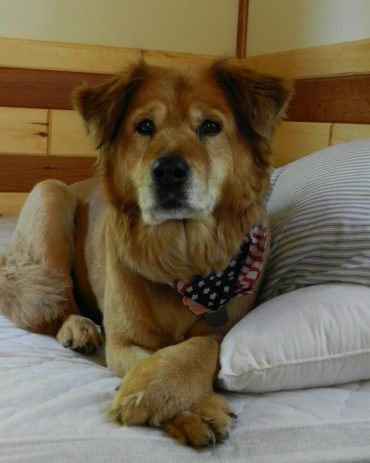 A typical Chowtriever is loving, playful, and friendly. They love being around their family, but can be suspicious of strangers. With proper socialization, it will show its good side.

We can expect them to be overprotective because of their history being bred as guard dogs.

You’ll also love that Golden Chows are very intelligent and easy to train.

But because of the Chow Chow’s reserved & stubborn nature, we recommend this pooch to experienced owners who know how to use positive reinforcement, patience, and treats during training sessions.

This hybrid may be good with kids but always supervise playtime. If they feel threatened or mishandled, the Chow Golden mix can nip in retaliation.

If you have a family with little ones, think twice before bringing in this hybrid. They may be more suitable for families with older children.

When it comes to other dogs, they’ll likely show signs of aggression if you introduce another pet into your family right away.

Avoid this by making sure your pet gets proper obedience training, and then slowly introduce and socialize your Golden Retriever Chow mix in a controlled environment.

So, unless your canine friend has a proven track record of being friendly towards other dogs, having another pet isn’t recommended.

This designer dog requires at least 60 minutes of exercise daily. Physical and mental stimulation usually go hand in hand, but owners of this hybrid said they’re more responsive to being on the move than doing mind activities.

That doesn’t mean you have to overfeed your Golden Retriever Chow mix just because she’s more active.

With their size, they’re still prone to obesity, so give your pet a high protein and fat diet with low carbohydrates.

Give your Golden Chowtriever 3 cups of dog food divided into three meals throughout the day. Dry kibbles are not only a convenient option, but it also has more nutritional balance. You can also feed your furbaby some vegetables and fruits.

How to groom a Golden Retriever Chow mix?

As we mentioned earlier, this crossbreed is a notorious shedder and will require daily brushing. Other than that, grooming sessions can be done every month or two.

Expect more hair and be prepared with a bristle brush, greyhound comb, and a rake for shedding season, though.

There’s also dental care where you need to brush your pet’s teeth 2 to 3 times a week. Tartar accumulation with this pooch can lead to gum inflammation and infection.

Do a weekly check of your Golden Chowtriever’s ears and clean it with a cotton ball and an ear cleaner for dogs. And for the nails, trim it every two to three weeks to avoid long nails from deforming your pet’s foot and injure her tendons.

Health: How long does a Golden Retriever Chow mix live?

One of the common reasons behind crossbreeding is to create a healthier dog than its purebred parents, also known as hybrid vigor.

And though the Chow Chow Golden Retriever mix is considered a hardy breed with a lifespan of 10 to 14 years, it can still suffer from genetic illnesses, like hip dysplasia.

Most vets recommend glucosamine supplements for dogs who are susceptible to having joint problems to reduce stiffness and swelling on their joints.

And because of its thick coat, this doggo may have allergies caused by fleas. There’s no need to stress since there are preventative shots and anti-flea collars to help combat flea infestation.

For the good news part about this designer dog’s health, breeders successfully created Golden Retriever Chow mixes minus the respiratory issues, which is one of the concerns with its Chow Chow parent.

Nowadays, it’s very straightforward to find and buy puppies online, but our advice is to ONLY buy from reputable breeders.

The golden rule (no pun intended) when getting a dog is to ask to see the parents and their medical documents.

Reputable breeders will be able to present you with their health records, and any other documentation about their breeding stocks’ and litters’ lineage.

If you want a Golden Retriever Chow mix puppy, each can cost around $500. Of course, the price may vary depending on the availability of the puppies, parent quality, breeder location, etc.

Goldies can have 4 to 12 puppies, and Chows can have 4 to 6 pups. So, we can safely say that this crossbreed will likely have a litter size within that range.

The Golden Chow mix isn’t the most popular designer dog, and we currently couldn’t find any breeders specializing in producing this specific mix.

Another option is adoption. Aside from the Golden Chowtriever, you can check out these rescue sites that offer Chow Chow crossbreeds, and Golden Retriever mixes looking for new, loving homes:

Due to the popularity of Golden Retrievers and Chow Chows, they’ve been crossbred with many other purebreds.

This medium-sized Chow Chow Husky mix also goes by the name of Chusky or Chowski.

They’re very playful, friendly, and an excellent addition to any family, even one with small children.

The Chusky comes from a line of very active, working parent breeds. They need to be walked at least three times a day, in addition to their playtime with other dogs.

Due to their activity requirements, this breed is not suited to live in an apartment.

Also called Labrachow, the Lab Chow mix is a hybrid that will either have an outgoing character like Labrador Retrievers, or it can be more reserved with a shy demeanor like Chow Chows.

The Labrachow’s coat can be a problem, as they somehow inherit the Chow’s thick fur. In those cases, the only way to keep it tangle-free is by brushing its hair three times a week.

Unlike the Goldie, this hybrid makes for a good guard dog. If a stranger is approaching, it will be sure to notify you either by barking or howling. However, this doesn’t take away from their socialness, as they love being around familiar people.

With very active parents, this canine will need lots of exercise – around an hour, topped off by 2 to 3 hour-long walks.

The verdict: Should you get a Golden Retriever Chow mix?

Golden Retriever Chow mixes can be excellent dogs, but they need experienced dog owners who can deal with their stubbornness and wary nature.

Before getting this mixed breed, consider the fact that they don’t coexist well with small kids and other pets, and they’re known to shed excessively.

If you can provide the kind of home and time that this fido requires, this might be the dog for you.

Do you think you have what it takes to take care of a Golden Retriever Chow Mix? Or maybe you already own one of these furry fellows? Let us know in the comment section below!