Home » Breeds » Get to know the amazing Giant Alaskan Malamute

If you love Malamutes, but you want a little more, then the giant Alaskan Malamute may be the perfect companion for you. 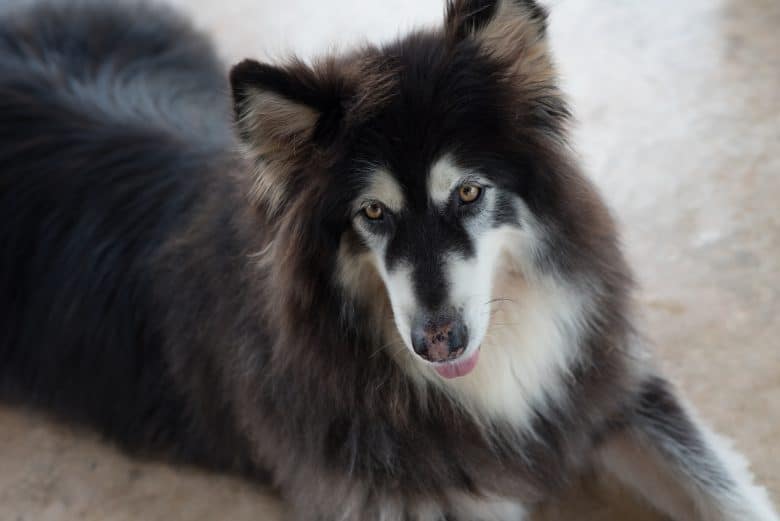 They have all the characteristics that a standard Mal may have, all in an oversized package. However, that doesn’t mean this breed isn’t without controversy. Ready to learn more? Stay with us and keep scrolling.

Is there a Giant Alaskan Malamute?

Yes, they’re real. So welcome to Giant Alaskan Malamute 101. We want to clarify that this pooch is a giant version of Malamutes.

Others believe that they’re unsatisfactory results of the breeding that happened to purebred Mals during the Alaskan Gold Rush.

Because of that, Pedigree Purists wanted to preserve the pure standard of the breed. They said that Giant Malamutes shouldn’t be bred.

For the most part, critics think that the “giant” dog idea is a gimmick used by some breeders to appeal to those who want huge pets and make money.

What are the actual differences between the standard- and giant-sized Mals?

Let’s go back to the very beginning, the origin of this canine. The Alaskan Malamutes ’ history can be traced back, as we mentioned earlier, during the Gold Rush in Alaska.

They’re descendants of domesticated wolf-dogs that came with hunters into North America 4,000 years ago.

By 1935, the American Kennel Club (AKC) first recognized the breed.

And since Giant Mals don’t conform to the breed standard of Alaskan Malamutes, they won’t be able to compete in any dog show of organizations who only recognize purebreds.

Does a Giant Alaskan Malamute look like a regular one?

They look the same. If you’re wondering if they have blue eyes like Siberian Huskies, they don’t. Alaskan Malamutes, both standard and giant, have eyes that have a rich amber-brown color.

If a Mal has blue eyes, or one blue and one brown eye, it’s not accepted by the AKC and automatically disqualifies a Malamute from conformation events. It shows that that pooch is a crossbreed.

Giant Malamutes also have a muscular build and a broad chest that’s perfect for pulling. And their thick, plume-like tails don’t curl.

How big can Giant Alaskan Malamutes get?

Because of their massive size and energy level, they don’t do well in condos or apartments.

It will also mean several walks every day to provide the exercise your Giant Mal needs and to keep her healthy, so we recommend these doggos to large homes with a large backyard.

The fluffy coat of Giant Malamutes

They come in the standard malamute colors – black, brown, gray, silver, and red – with that characteristic white face and white markings all over the face like a mask.

Some have it on their snout or the crown of their head.

Both dogs have long, doubled-coated hair that can reach up to 2 inches (5 cm) in length. Regardless of the size, these dogs are born to live in places with cold weather, so under that coarse topcoat is a soft undercoat for extra protection.

In case you were wondering – yes, they shed this fabulous fur. All over. Watch this video of a Giant Alaskan Malamute blowing its coat:

In general, Malamutes are bred to face physical challenges by always working, but they’re adorably cuddly and affectionate to their humans.

What you have to watch out for is food aggression – a trait inbred in this all Mals. It may sound awful, but it was essential for their ancestors’ survival.

Although they’re excellent family pets, their territorial behavior isn’t a good match for those households with young kids.

It only takes a few seconds for a child to approach your pet’s food bowl, especially during feeding.

Not only that, think about this breed’s raw power, as well.

Giant Alaskan Malamutes may accidentally knock down children and the elderly.

When it comes to other pets, like cats, we still have to consider that Mals have a hunting background. They may tend to chase and attack small furry creatures.

In the wild, each Alaskan Malamute has to fight other sled dogs to assume “pack leader” status. Giant Mals may do this to other dogs, too.

Because of those qualities, we recommend this pooch to active families who have older children and don’t have any other pets.

Overall, Giant Malamutes have an enthusiastic and curious personality. Since they enjoy being surrounded by their favorite people and thrive on attention, you shouldn’t leave your pooch alone for long periods.

If they get bored or suffer from separation anxiety, expect howling, destructive tendencies, and even escaping to let their owners know what they feel.

Even those well-trained Alaskan Malamutes will run when they can because it’s simply their nature.

They’re playful and adventurous doggos who will climb, push, or dig their way out of enclosed areas. If possible, provide opportunities for your fido to run freely or off-leash.

If not, try biking alongside your pet while she’s on a leash.

Aside from early training and socialization, Mals are smart dogs that can be trained to be service dogs. Some can be too stubborn, so experienced owners or handlers should own this breed.

Remember how we mentioned that these dogs were first bred to work alongside humans in Alaska? That should tell you that these pups don’t do well in extreme heat.

In the summer months, heat and humidity can cause dehydration and heatstroke, which can kill them!

Never leave any dog, particularly breeds like Malamutes, outside in the sun tied to a leash, or in the yard without proper shelter.

They should always be able to get to a cool, shady spot with plenty of water.

It should go without saying that you should never leave them – or any dog – in a hot car, either.

During their exercise, plan on one to two hours of physical activity daily. During winter, let your fur buddy romp in the snow. They love that!

You can harness them to a sled to pull the kids. It’s a great way to tap into their natural instincts and to wear them out. If you let them pull sleds or carts, attach the harness correctly to the chest, not the neck area, to avoid injury.

How much does a Giant Alaskan Malamute eat?

Not only will you have to pay extra for your electric bill by letting your Giant Alaskan Malamute stay in an air-conditioned room to keep cool, but get ready for a massive food bill, as well.

These dogs eat a lot! They need about 6 cups per day, depending on their size, age, and metabolism. Split this into two meals to avoid bloat.

Choose a dog food that’s made explicitly for giant, active breeds. Their diet should be high in protein, at least 25%, and 10% fiber. The first ingredient should be real meat, not fillers like corn or oats.

If you let them self-feed, it can lead to obesity. Make sure to watch their intake and check your pet’s built to make sure he’s not overweight.

You should be able to feel the last two ribs easily. If you can’t, consider reducing his meals.

We showed a video earlier of how this breed blows its coat. So, the answer is yes. They shed excessively twice a year as the season changes, and they shed moderately all-year-round.

All Malamutes have a lot of hair, but giants have twice as much, so keep this in mind when you’re committing to owning one.

This next video is quite long, but it shows the grooming or coat care Giant Malamutes need.

Health: How long does a Giant Alaskan Malamute live?

Giant Mals have a lifespan of only up to 12 years. They have shorter lives than small breeds, as all giant dogs do.

Because of their size, they can be prone to elbow and hip dysplasia. You’ll want to keep a close eye on them so you can jump on a treatment plan if you notice any joint problems.

They also suffer from polyneuropathy and hypothyroidism. The reality is that dogs bred primarily for their size are not beneficial for their health.

If you decide you want a Giant Mal, it’s imperative that you buy one from a reputable breeder who completes health exams on their breeding stock.

How much is a Giant Alaskan Malamute puppy?

Giant Alaskan Malamutes aren’t very common, which is another reason why their price can go that high.

This breed shouldn’t be bred for more than three consecutive years, so a responsible breeder wouldn’t always have an available puppy for sale.

Each litter usually consists of 4 to 6 puppies. On rare occasions, a Giant Mal mom can give birth to 10 pups.

When buying any dog, we advise you to visit the kennel and meet the parents of the puppy you’re interested in, especially with Giant Alaskan Malamutes. Some are not purebred, but a mixed breed.

Sometimes, Tibetan Mastiffs are used to create a line of massive canines with excessively fluffy coats.

If you observe them, the problem with these puppies is that they have stubby legs that only make them bounce because they can’t reach and gait fluidly.

While visiting the dogs, ask the breeder for the parent breeds’ medical records and health certificates to ensure proper breeding practices were followed and that they’re clear of any illnesses.

Only buy from someone who completed their health checks through the Orthopedic Foundation for Animals.

If you feel like you’re ready to search for a Giant Malamute of your own, check out these websites and see if they have any pup available:

Do your research and look at what people have to say about these breeders before deciding.

We can’t emphasize enough how finding a good breeder is essential. Making one wrong move can mean heartbreak and a severe financial hit in the future.

Another option is adopting either a puppy or an adult dog. What’s nice about rescuing older canines is that they’ve already learned the basics, like obedience and potty training.

Besides, their age wouldn’t mean they’ll love their new owners any less.

You can always adopt a Giant Alaskan Malamute by checking in with your local shelter.

We couldn’t find any major rescue organizations for Giant Mals online, but you can still look at these rescues that cater to Alaskan Malamutes and their mixes.

If you want to pick out rescue affiliates in your specific state, Alaskan Malamute Assistance League offers that option. For those who are in Canada, The Alaskan Malamute Help League is worth checking out.

Weighing in the good and the bad about Giant Malamutes goes back to the controversy of whether they should be bred. Breed standards focus on substance over appearance, and gigantic dogs can’t perform traditional tasks well.

Breeding and owning a dog should always prioritize structure, health, and temperament.

We understand that some prefer colossal pets, and they deserve the same love as any other fur angel out there. But despite the size of the Giant Mal, they still look and act like any Alaskan Malamute.

And if this breed completed your checklist – massive, fluffy, cuddly, affectionate, excellent companion, and active.

Great! They may come with their own set of considerations, like higher maintenance, and you have to be cautious when they’re around kids and other pets.

If none of that is an issue, then this pooch might be right for you.

What do you think of the hardworking yet goofy Giant Alaskan Malamute? If you’ve seen or you own one, share with us your experience by leaving a comment below.