Home » Breeds » Do you know all the different types of Golden Retrievers?

You might have noticed that not all Goldens look alike. Some are fair, others dark. Some are lanky with minimal feathering, while some look like teddy bears.

The three types of Golden Retrievers

English Golden Retrievers originated from Scotland in the 1800s. They are adaptable gundogs bred specifically for the wet and cold climate.

Due to their popularity, the breed was shipped to Canada and America. There, they were developed further, resulting in cosmetic differences in the breed.

Each country developed their Goldens to their liking. That’s how the American, British and, Canadian Golden Retrievers were born. These dogs have been bred to highlight specific characteristics.

Within those classifications, you also have the field and show variety. Field dogs are smaller than show dogs. They also have less feathering and conformation to the breed standard.

It’s possible to have Goldens that don’t fit into the variation standard. Some British Goldens are dark, and some American Goldens have less feathering. It’s all dependent on their pedigree.

Despite their differences, they are all purebred Golden Retrievers. Pasta is still pasta, no matter how it looks. Do note that since they are the same breed, some breeders mix two varieties.

This might further blur the lines between which is which.

American Goldens come in a wider range of gold. They are most commonly found in their signature Standard Gold.

They have thick feathering around their neck, chest, and hindquarters. Their tail should be carried with a little curve, showing off their beautiful plume. And their backs gently sloped.

They have a narrow profile that blends seamlessly into their skull. Their ears are set a little behind their eyes. You’ll also notice that their eyes are almond-shaped, almost triangular when viewed from the side.

Their eyes are also the lightest among the three variations.

Also referred to as “English Golden Retrievers,” they are the fairest of them all. Their coat is long and lustrous, with a prominent ruff around their necks. They are sometimes dishonestly marketed as White Retrievers.

All Goldens descend from this variation.

English Golden Retrievers are more solid, with a sturdy and a broad head. They look like teddy bears with their large round eyes.

Their eyes and ears are level to each other. They also carry their tails quite level to their backs.

According to experts, British Golden Retrievers have a smaller chance of contracting cancer. They are also thought to have longer lifespans.

According to an expert, 99% of all Goldens in Canada and America can be traced back to Archie Marjoribanks’s Lady.

Canadian Golden Retrievers have a darker, flatter, and shorter coat. They have very little feathering around their legs, neck, tail, and underbody.

They carry themselves like the American: with their tails slightly curved. However, they have the level back of the English.

Their heads are well defined, with a high arch over their broad skulls. Their eyes are dark and tapered, with their ears set slightly further behind.

Below is a chart for a quick comparison between the three variations:

Goldens come in all shades of gold, from light cream to almost red. The AKC states that Goldens shouldn’t have very pale or dark coats. They only recognize Light Golden, Golden, and Dark Golden in the show ring. 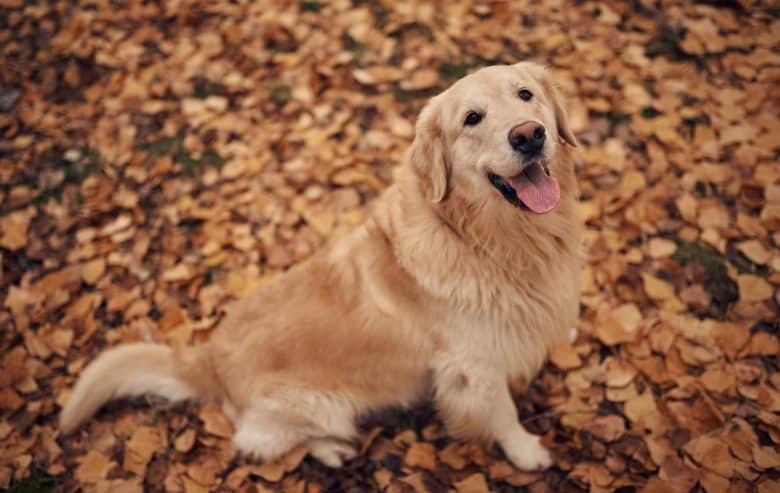 No Kennel Club accepts Red as a color. Red Golden Retrievers do exist but will not be able to compete in the show ring. They should not be confused with Dark Goldens. Those are darker than the Standard Golden with no red undertones.

Golden Retrievers also come in Light Golden and Cream. Light feathers or white markings on the face due to old age is acceptable.

Don’t miss out: Is the English Cream Golden Retriever the better Goldie? 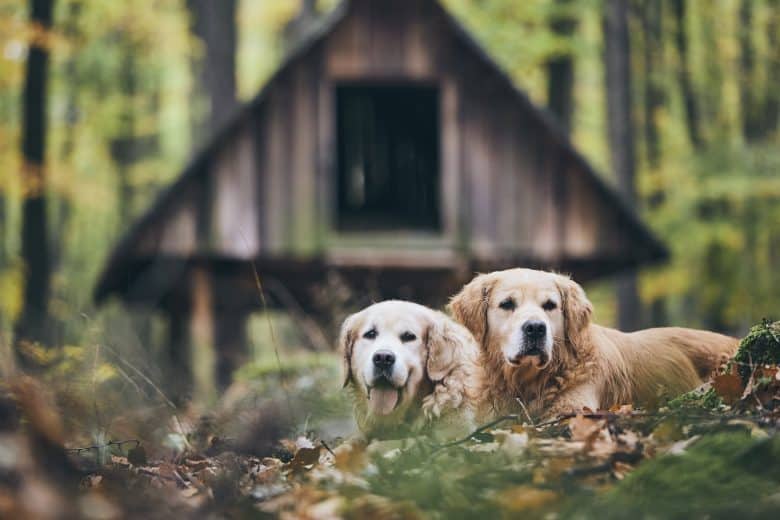 A purebred Golden Retriever cannot be black due to genetics. However, sometimes mutations occur, and you might get a Golden with a black “birthmark.” Solid black Golden Retrievers are usually mixed with Labradors or Flat-Coated Retrievers.

Puppies don’t vary much from their parent’s colors. To be sure, check the fur behind their ears, it’s a good indication of their adult color.

Here are some popular questions about Golden Retrievers and their types

Now that we know the subtle differences between the three variations let’s get to know the Golden Retriever a bit better.

All Goldens are bred to be friendly, loving, people-pleasing, gentle, and intelligent. There shouldn’t be any notable differences.

However, poor breeding practices might affect their temperament. This is why it’s important to find a reputable breeder.

Which type of Golden Retriever sheds the least?

They all shed daily throughout the year and blow out their coat twice a year.

Since the Canadian Golden Retriever has a shorter and lighter coat, their shedding might not be as noticeable.

Don’t miss out: Is my Golden Retriever shedding too much?

Are there types of dogs that look like Golden Retrievers?

The Labrador Retriever is very similar to the Golden Retriever. Their coats are shorter and require less grooming. If you’re looking for a more low-maintenance breed, you should consider Labs. 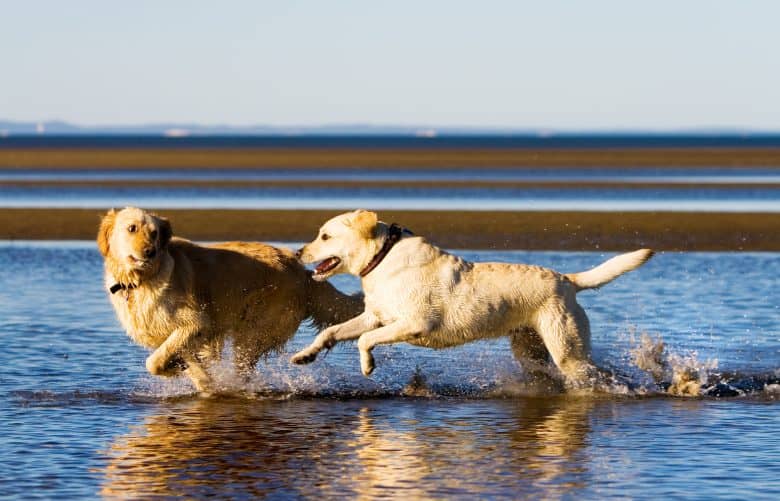 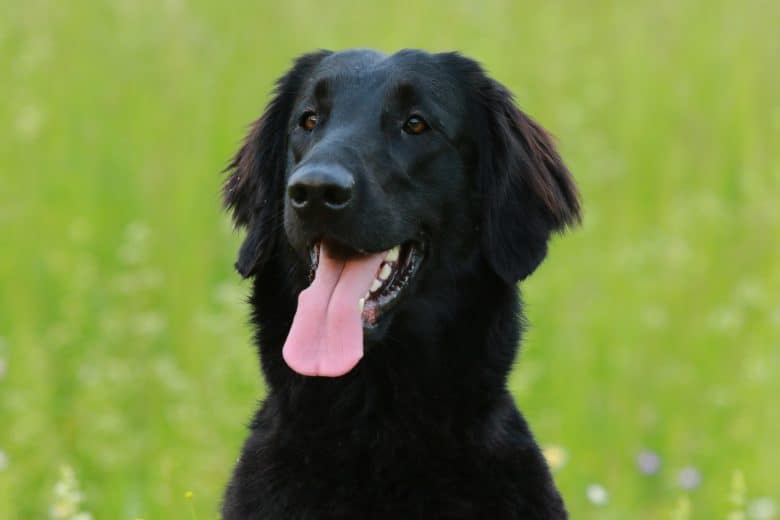 Are there a smaller type of Golden Retriever?

Yes, there’s the Comfort Retriever, which is a mix between Poodles and Goldens. Also called a Goldendoodle, it is a fantastic designer dog for those with allergies. You will have to clip him occasionally, though.

Another cross you will love if you want a smaller dog is the Golden Cocker Retriever. Usually around 30 to 45 lbs (13 to 20 kg). While it doesn’t blow its coat, you’ll have to brush him daily.

There is no such thing as a purebred miniature Golden Retriever.

What type of Golden Retriever is Tucker Budzyn?

Ah – the most famous Golden Retriever of 2020. He has 2.6 million followers on Instagram alone. This handsome pooch is AKC-certified, which makes him an American Golden Retriever.

Below is his most popular video with 31 million views on Youtube!

Which type of Golden Retriever is best?

There is no “best” because they are virtually the same. They all shed the same, act the same; they just don’t look the same.

You should make a choice based on your personal preference. Are you after a sleeker Golden, or do you prefer them with big blocky heads?

Let us know what you look for in a Golden and which one you would get in the comments.