The English Cream Golden Retriever is an all-star canine with a kind, loving personality and gorgeous, creamy look.

Also known as White Goldens, English Golden Retrievers, Blonde Goldens, European Goldens, and Platinum Blonde Golden, other fancy nicknames are mostly inaccurate and are just ways for some breeders to lure in customers.

But are you curious about the 101 and facts about English Goldies? Keep scrolling!

What is an English Cream Golden Retriever?

This pooch is a Golden Retriever with a paler coat (“cream” or “white”) and English origin.

These pups were used as gun dogs, retrieving games both in water and on land. They were cherished because of their unique soft mouth grip.

You may have heard of the golden retriever egg challenge that went viral a few years back. But for those who haven’t seen it, here’s one video of it:

There are many misconceptions about the difference between Golden Retrievers with a cream-colored coat and those with golden-shades. But the truth is, both dogs descended from the same bloodline.

Where do all Golden Retrievers come from?

As we mentioned earlier, Goldens were first bred in Scotland. During the 1800s, Lord Tweedmouth wanted to create and develop the breed. Today, this sporting dog ranks third in AKC’s breed popularity list.

The English Cream variation of Golden Retrievers has been recognized by the British Kennel Club (KC) since 1911.

Still, those with a light golden shade can be listed with the American Kennel Club (AKC), which recognizes the breed since 1934.

Many people desire the European lines of Goldies because they believe they’re a guarantee of the highest pedigree for conformation events and breeding.

They’re mostly bred due to their sturdy structures, unmatched temperament, and outstanding health, which we’ll discuss one by one.

Disposition: What makes the English Cream Golden stand out?

English Cream Golden Retrievers have a robust, solid build and broadheads. They’re also known for their dark, round, puppy-like eyes.

Their glossy coat is cream-colored, but even the whitest shade would still have gold highlights through their fur. They’re not actually white, so it’s more appropriate to use the term “cream.”

But did you know that cream was only added to the English standard in 1936? Even with selective breeding, it took years before they got called “English Cream Golden Retrievers.”

How big do English Cream Golden Retrievers get?

It may be surprising to some, but English Cream Goldies are the smallest of all the types of Golden Retrievers.

Some may reach the usual size of Golden Retrievers, but this dog’s average height is about 20 to 22 inches (51 to 56 cm). As with all canines, males are usually larger than females.

With their build, they’re suitable to live in all kinds of houses, including apartments, as long as they get the exercise they need.

Yes. Typically, English Cream Retrievers are calmer than their American counterparts, but that doesn’t mean they have lower activity levels, especially as a young pup. But overall, they’re easier to train.

In general, Golden Retrievers are known for having that puppy-like trait throughout their life, but English Cream Goldens are said to mature faster, especially when a lot of time and attention is placed into training and socialization.

That doesn’t mean they need less attention and love. No matter what type of Goldie it is, they’ll always look for affection, like when it comes to scary things, like escalators:

All Golden Retrievers are kind, loving, and great with children. They’re extremely affectionate and gentle. For these reasons, they’re known to be great therapy and service dogs.

These social pupper-flies are great with other dogs and cats – even if introduced later in life. They are a very patient breed and tend to get along with all people and pets.

Unfortunately, their social nature makes them susceptible to social anxiety. They’d rather always have someone (or some fur-friend) with which to engage.

Like what we mentioned earlier, English Cream Golden Retrievers are highly trainable. They’re intelligent, loyal, and are eager to please their owners.

You’ll be able to quickly teach your pup commands like Sit, Stay, and Come. With positive reinforcement and a few treats, almost nothing is impossible with this breed.

They need socialization and structure but beware of their goofy, playful side. It may come out while trying to be serious about commands, so you’ll have to be stern while mixing in a sense of humor if you want to train your Golden properly.

How to care for your English Cream Golden 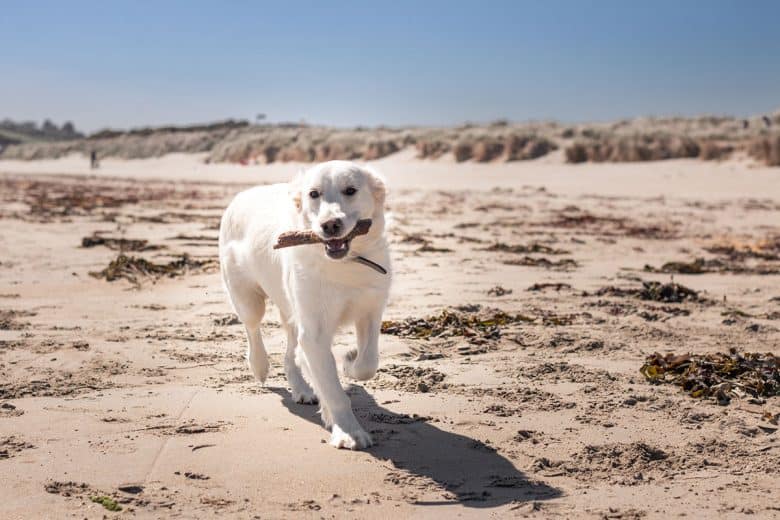 They’re not hypoallergenic dogs and are considered heavy shedders. Shedding can become worse when blowing their coats during spring and fall.

Control the fur frenzy with lint rollers, a vacuum, and grooming tools like a de-shedding brush, comb, and glove.

For bathing, this could be done once or twice a month. It will depend on how much outdoor and swimming time they’re getting.

Ears should be checked and cleaned weekly. Paying attention to eye and ear care can help keep infection at bay. Teeth brushing is best done daily, but it’s okay to do it once a week.

Nail clipping is best done monthly, but it will depend on how active your fido is. Active canines tend to wear their nails down. If not, you can trim them every two weeks or when you hear them clicking against the floor.

You can also bring her to the grooming salon for some pampering.

Speaking of being active, English Cream Golden Retrievers need at least an hour of exercise a day. You can divide this into a two 30-minute-walk.

What’s important is for your pooch to get tired, so that she can be happy and relaxed in the evening.

Although they love the outdoors, you should still mix up her activities to avoid boredom. Their love for water is a great option. Invest in a doggy pool so she can play on her own in your backyard.

Mental stimulation is equally important. Giving your fur buddy a Kong with peanut butter or a puzzle toy can entertain and keep her busy.

Just take it easy with the doggy snacks because all Golden Retrievers love food!

They may be highly motivated by it, but it’s best to feed them 2 to 3 cups of high-quality dry kibbles split between two to three meals a day.

Owners of Goldies usually won’t have any trouble having a picky pet, but steer clear of giving your doggo table scraps and too many snacks no matter how adorbs those puppy-dog eyes are. Fruits and vegetables are excellent alternatives.

Large breeds are more prone to obesity and bloat. Aside from controlling mealtime, keep your English Cream Golden from gobbling up her food by serving her kibble on a slow feeder.

It would be best if you also let her rest for 30 minutes after eating before playing.

This breed has an average lifespan of 12 years, but there’s no actual proof that coat color has something to do with any dog’s health.

This also means that English Cream Golden Retrievers are susceptible to the same illnesses that any Goldie will have.

At the very least, some say there’s little evidence to support that English bloodlines are healthier. Other than that, it will mostly depend on breeding or ancestry, regular check-ups, up-to-date vaccinations, and overall care.

Some of the common health issues Golden Retrievers face are hip and elbow dysplasia, Osteochondritis Dissecans, and cardiomyopathy.

When it comes to cancer, studies have predicted that English Cream Goldens’ have a lesser cancer rate, only about 38.8%, while American Goldens’ is about 60%.

They aren’t rare because an English Cream Golden Retriever can give birth to an average of 8 puppies in a litter.

Most people ask this because some breeders advertise that they have “rare White Golden Retriever puppies for sale.” This should be considered a scam because they aren’t actually white, but just lightly golden in color. 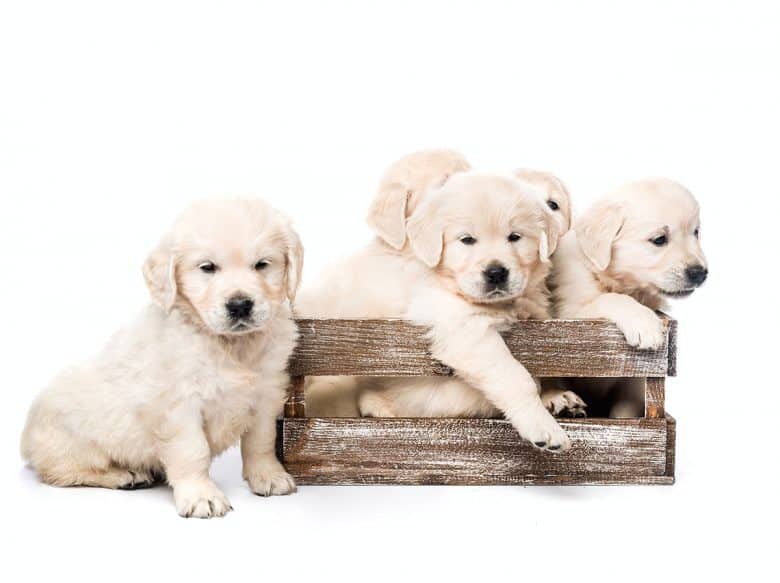 Words like platinum or white are marketing terms used to trick buyers into paying more. These terminologies are also frowned upon by the AKC and KC as any Golden Retriever color that’s too light or dark is considered a fault.

What makes English Golden Retrievers expensive is their bloodline, so you can expect to pay a price of $1,000 to $3,000 for a puppy.

Also, keep in mind other costs associated with taking a puppy home for the first time.

Another red flag is when they make claims saying their breeding stock and pups are healthier or better than the AKC standard for Goldies. We’ve learned that this is simply not true.

To stay safe and ensure you’re buying and bringing home a healthy English Cream Golden Retriever puppy, do your research, see what others are saying about the breeder or their kennel, and visit the pup’s parents and littermates.

While you’re there, take a look at their medical documents and health certificates to make sure they’re clear of any diseases before breeding and after gestation.

It’s best to be prepared with questionnaires, too, so you know what to ask before signing any contract.

If you feel like you’re ready to check out the available English Cream Golden Retriever puppies for sale online, these websites can start your search:

Even purebreds often end up in shelters. We advise you to visit your local shelter first to see if they have any available English Cream Golden Retriever puppies or adults ready for adoption.

Another place to adopt these dogs are through rescue organizations that cater to Golden Retrievers and their mixes.

We’ve gathered some reliable Golden Retriever adoption sites where you may find English Creams or other Goldie mixes, such as the Goberian (Golden retriever and Husky mix) if you’re interested.

We’ve seen how much this Goldie is compared to other Golden Retriever types.

Although they have similarities in appearance, there are a few more key differences between them, which is more than their coat color.

So aside from looking at their official AKC breed standard and UK standards, here’s a chart to show the differences between the American Golden Retriever and the English Cream Golden Retriever.

Weigh in the pros & cons of English Cream Golden Retrievers

Golden Retrievers are famous in the canine world, but that’s not enough to make you want to get a Goldie of your own.

Deciding on which dog breed to get is a big deal, so it will all go down with the good and bad – their admirable qualities and quirks.

English Cream Golden Retrievers have a similar temperament as any Goldie – sweet, loyal, and goofy. They’re perfect family pets since they get along with children and other pets.

What you need to think about is their grooming and exercise needs. But aside from that, they’re excellent companions.

I’m officially sold on the English Cream Golden Retriever! Are you? Leave a comment below.