Famed for their calmness and reliability, the Golden Retriever is one of those classic breeds we all love.

As you think about getting a Golden of your own, you’re sure to imagine your perfect Golden Retriever puppy: their downy fur, their chocolatey eyes. What you might not have considered, however, is their coat color.

But wait, aren’t Golden Retrievers…golden? The answer isn’t as obvious as you might think!

Golden Retrievers stole America’s heart over a century ago when they first came to the States from the UK. Today, Goldens continue to solidify their place as one of the best family dogs.

Golden Retrievers are medium to large canines, often weighing around 55-75 pounds (25-34 kg) and standing 20-24 inches (51-61 cm) tall. Despite their size, this breed has a reputation for its own brand of fun docility.

Simply put, Goldens are just as lovable as they are big! Did you know that there’s more than one type of Golden Retriever? Much like your favorite potato chip, Goldens come in multiple varieties.

Canadian Golden Retrievers tend to be taller than the other two types. Their coats are generally shorter with less fluff, as well.

British or English Golden Retrievers are known for their long, wispy cream-colored coats. With a strong chest and large skull, British Goldens are good choices for owners who prefer a dog with a sturdier build.

American Golden Retrievers are a bit more slender than their counterparts. They frequently sport a dark golden coat–a beautiful contrast to their light brown eyes.

As you might have noticed, it’s their build and fur that help us distinguish a Canadian Golden from an American or a British. But what if we told you that this is just the tip of the proverbial iceberg?

Keep reading to learn more about the Golden Retriever’s rainbow of colors!

Can Golden Retrievers be different colors?

Goldens tend to be one solid color, with lighter bellies, legs, and tails. The AKC only recognizes dark golden, golden, and light golden in this canine’s breed standard.

It’s no surprise, then, that most Goldens will fall within this range.

It may sound like the Golden Retriever color spectrum is rather limited, but that couldn’t be further from the truth. There are an infinite number of golden tones and hues, and your pooch could be any one of them!`

As a matter of fact, some Goldens are so richly pigmented that their coats appear amber- or ginger-colored. Others have so little pigment, they look like four-legged, furry snowballs.

Stunned? We thought you might be. If this is your first time hearing of not-so-golden Golden Retrievers, you’re in for a treat! Keep reading to learn more about each of the Golden’s main coat colors. 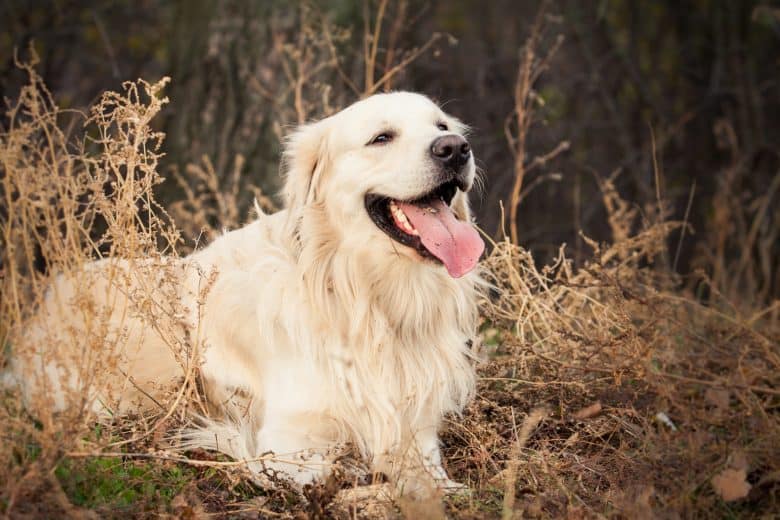 Light golden coats can appear white in some lighting, but they’re really more of an ivory.

Don’t despair, though. This doesn’t mean that cream Golden Retrievers are hard to find outside of England. This variant is quite common the world over!

Standard gold (or just golden) is arguably the most prevalent of the Golden Retriever shades.

Bright and honey-toned, this is probably the color you think of when you envision a traditional Golden Retriever.

Dark golden coats are somewhere between the standard golden and red varieties.

Goldens with this coat color can actually be incredibly hard to differentiate from red Goldens. The easiest way to tell is to look for amber undertones.

If you don’t see any, that Golden Retriever has dark golden fur.

Because dark golden pups meet the AKC breed standard, they’re a solid option for owners who love a vivid coat but also want to compete in dog shows.

Red Golden Retrievers are somewhat rare, though not impossible to find. We should also note that “red” is an umbrella term. In reality, red Goldens are shades of mahogany, amber, red-gold, and dark brown.

Depending on the intensity of your Golden’s fiery coat, they might get mistaken for an Irish Setter.

Historians theorize that interbreeding between Goldens and Irish Setters is what introduced the red hair gene to the Golden bloodline.

In addition to their distinct fur, red Goldens’ fur isn’t as long or as wavy as other Goldens. They don’t have quite as much as feathering, either.

While they’ll still need considerable grooming, you might consider a red Golden Retriever if you prefer a pup with a medium-length coat.

Is one Golden Retriever color better than another?

Nope! Your Golden’s coat color has no effect on their temperament, shedding, or intelligence. It all comes down to personal preference. That, and your dog’s purpose.

If you intend to show your Golden competitively, stick to one of the AKC-approved colors: light golden or cream, golden, or dark golden.

Otherwise, your pooch could either be barred from participating or hit with a penalty.

If your Golden Retriever puppy is training for a life of couch cuddles and playtime, feel free to go for whichever color you like best.

In short, no color is more expensive than another. Your Golden Retriever puppy will be in the ballpark of $500-3000, no matter where they are on the Golden color spectrum. There’s no such thing as a pure white Golden Retriever. Any Golden puppy that appears white is really just a very pale cream.

Plus, Golden Retriever puppies’ fur can darken over time. That “platinum” pooch could easily be a standard Golden waiting to blossom.

Goldens are canine chameleons. Over your pup’s first year, their top coat grows in and gradually covers them in a golden hue.

You’ll love looking back on pictures of your winter white pup deepening to dark golden!

A dog’s coat color comes down to their genetics, so you can look at your future Fido’s parents for an idea of how your pup will turn out. This isn’t an exact science, though.

In fact, it’s almost impossible to determine how a mama Golden’s puppies will look before until you actually see them.

Any tint in a litter’s bloodline, even if it hasn’t presented itself in generations, can make an appearance when the pups are born.

And to really spice things up, even Golden Retriever puppies from the same litter can look totally different!

You might get a more accurate prediction by checking out your Golden’s ears. With some exceptions, the Golden Retriever’s final fur color tends to match their puppyhood ear color.

Looking at the group of snuggle muffins below, we can tell that the Golden Retriever puppy on the far right will likely stay a cream color into adulthood.

The other pups, however, seem to have a deep golden coat brewing! 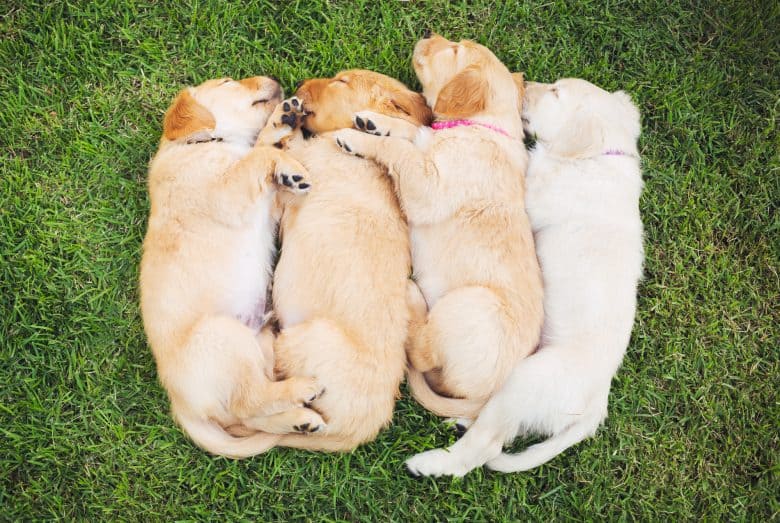 Golden Retrievers are highly capable dogs, but one thing they can’t do is maintain those long locks without your help.

The longer your Golden’s fur, the easier it’ll be for mats and tangles to develop. Brush your Golden Retriever every day to prevent this.

Daily brushing can help keep shedding at bay, too. Whether your Golden Retriever is a deep auburn or standard golden, they’re guaranteed to leave a trail of fur wherever they go.

Feel free to brush your Golden more often during spring and fall, their heaviest shedding seasons.

Whatever you do, don’t shave your Golden! Contrary to popular belief, shaving a Golden Retriever does far more harm than good.

If your dog’s shedding is out of control or the grooming routine is overwhelming, lighten the load by going to a professional groomer instead.

Read more: Tips on how to manage your Golden Retriever’s shedding 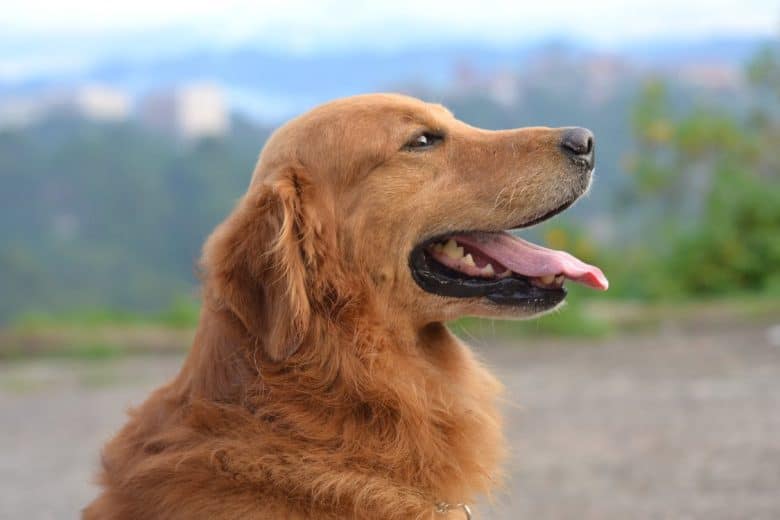 Which Golden Retriever color will you choose?

From auburn to beige, ivory to rust, Golden Retrievers come in a kaleidoscope of colors.

If you appreciate the classics, look for a Golden with a traditional light to dark golden coat. Have a flair for the avant garde? A vibrant red Golden might be your jam!

So, which of these shades catches your eye? Let us know in the comments!