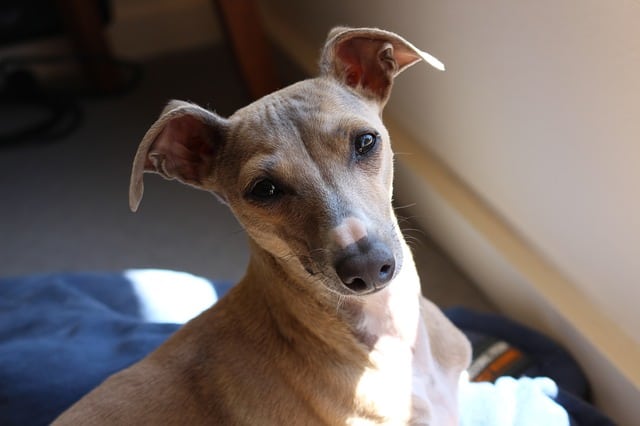 What’s so special about Italian Greyhounds?

Everything. Okay, so I’m passionately devoted to this fabulous breed, maybe even obsessed. They’re beautiful and clean without expensive or time-consuming grooming. They’re small enough to fit into any living situation yet large enough to be real dogs.

Although small in size, they bark rather than yap. Most of all, they have an extremely loving, devoted nature and a scintillating, sometimes unpredictable charm that never allows for a dull moment.

They are sweet, gentle, affectionate, sprightly, and imaginative. Most Italian Greyhounds are one person or one family dogs that want to be physically close to their humans. The Italian Greyhound is a unique breed that has the ability to completely entrance its devotees, although a few of its more whimsical attributes might charm some and be a turnoff for others.

Where did the Italian Greyhound come from?

There is some question whether the Italian Greyhound was originally intended to hunt small game or vermin or mainly to be a beloved companion. Most likely both of these theories are true. Many Italian Greyhounds have a strong instinct to hunt and chase.

Others have none, since, at least during the past century or so, they have not been bred for this characteristic. It is also likely that they became a popular household pet during the days before central heating because their warm little bodies can be very comforting in an otherwise cold bed.

The Italian Greyhound goes back a long way in history as does the large Greyhound, probably originating as long as 2,000 years ago in the areas that are now the countries of Greece and Turkey. A small sighthound is depicted in the early artworks of these nations, and bones indicating a dog of this type have been found in archeological sites.

The breed became popular in Southern Europe during the Middle Ages and by the 16th Century many were depicted in Italian paintings and sculpture. It is for this reason, not because of its origin, that the little hound became known as the Italian Greyhound.

Its larger cousin, the Whippet, originating in England in the 19th Century, is a relatively new breed that started as a mixture of large Greyhound and terrier and later incorporated some Italian Greyhound blood to add refinement.

The Italian Greyhound has always been a favorite of royalty and aristocracy, and many paintings show historical figures such as Princess Anne of Denmark, Queen Victoria and Catherine the Great of Russia with their beloved Italian Greyhounds.

It is a well known fact that Frederick the Great was a great fan of this breed and was almost always seen with one or more of them.

The breed’s top producing sire was Ch. Dasa’s King of The Mountain, with 78 title holding offspring. Top producing dam was Ch. Dasa’s Ebony Queen, with 30. Since Italian Greyhounds have small litters –usually 2 to 4 puppies –these records are quite likely to stand for some time.

How big do they get?

How long do they live?

Are there medical problems common in the breed?

Hypothyroidism and other autoimmune diseases, PRA, seizure disorders, luxating patellas, Legg-Perthes. None of them is rampant but all of these as well as some other genetic maladies have been diagnosed in some. A few bloodlines have a predisposition for leg fractures because of lack of bone density.

Responsible breeders also have their dogs checked for Legg-Perthes, luxated patellas, heart irregularities and, if suspected, hypo-thyroidism. Some veterinary orthopedic specialists claim that bone density can be checked by x-rays, but there is some doubt as to the effectiveness of doing this.

The Italian GreyhoundCA’s health committee has been working on a study of patterns of heredity in excessive leg breaks but thus far there is no positive method of identifying the problem. Prospective owners of Italian Greyhounds should inquire of the breeder whether the sire and/or dam or any of their offspring have experienced fractures.

What is their energy level and attention span?

The energy level is quite high in healthy puppies and young dogs. Mature Italian Greyhounds are quite adaptive and responsive to the energy level of their owners. They are true sighthounds in miniature, and the attention span can be short if they’re bored.

Although Italian Greyhounds reach physical maturity between eight months and a year and a half, depending on their bloodline and their size (larger ones tend to keep growing for a longer period) most of them retain their puppy energy and playfulness well beyond that age.

Some do not attain mental maturity until they are three or four years old –another characteristic which many fanciers consider to be part of the charm of this breed. Some other owners might be impatiently waiting for their dog to “grow up.”

What about dominance and submissiveness?

A single Italian Greyhound is usually submissive in nature; but in a situation that involves several Italian Greyhounds or other breeds of similar or smaller size there can be fights for dominance in the pack.

A caveat here is that many fanciers new to this lovable and affectionate breed refuse to believe that these normally sweet dogs may be small, but they are true hounds and they have a strong tendency toward pack behavior.

More owners than I care to mention have come home to find that an ill, old or otherwise weak “pack member” has been severely attacked by the stronger dogs.

Again, these are sighthounds and individuals vary greatly in these characteristics. If they were human they would do better in a liberal arts school than at a military academy. Some do superbly in obedience competition, and others don’t do well at all.

Much depends on the trainer’s ability to keep the Italian Greyhound interested. Agility is a sport that could have been invented for the Italian Greyhound, and they make excellent therapy dogs. Some are even adept at lure coursing, although the latter should be undertaken with a degree of caution.

Are they hard to housetrain?

Some owners say they are, and some Italian Greyhounds can be stubborn about it. It’s especially hard to persuade an Italian Greyhound to ask to go out in extreme weather. Owners who install doggy doors and those who paper train have the best results. [How about a litter box?]

Most Italian Greyhounds will bark an alert warning when someone or something strange approaches. They aren’t likely to do more than bark and behave in an agitated manner in the face of danger to their owner or property, although there are exceptions to this too.

Can they live outdoors?

The Italian Greyhound is definitely an “inside dog.” Outdoor play and walks on warm days are enjoyed, but this isn’t a dog that can be left alone to fend for itself in the back yard.

This is minimal, but teeth and toenails need regular attention. The coat is so short and fine that a bath is rarely necessary.

Yes, but the hair is so short and fine that it can hardly be seen.

Are they low maintenance pets?

The amount of time not used for bathing and grooming is required tenfold for attention and love. Italian Greyhounds can be almost needy in their desire for affection.

Are they good with children and other pets?

Italian Greyhounds have great rapport with gentle children who understand that this is a living creature and not a toy that can be manhandled. An Italian Greyhound could be injured by a thoughtless child. The same is true of interaction with other animals.

They get along well with cats and other dogs of similar size but must be protected from rambunctious larger pets.

Do they need any special care?

A sweater or jacket is in order in cold weather. Although the Italian Greyhound is not as delicate as he looks, care must be taken to avoid “booby traps” that might result in a broken leg. Not likely to run away simply to explore, many Italian Greyhounds would run into the street or even take an incredible leap from a balcony or open window in playful pursuit of a cat or other animal —or to follow their masters.

This breed should NEVER be walked off lead, since another dog or something unusual might spook them, causing them to bolt.

Who should not own an Italian Greyhound?

People who have too little time to devote to their dogs, who have unruly children, who expect instant and unerring obedience, who expect their dog to stay in the back yard, or who are embarrassed to share love with an animal should not own this breed.

Are there any bad things about Italian Greyhounds?

They require and demand lots of love and attention. Denied this, they can become shy or hyper or both. They must be properly socialized as puppies. Those that are kennel raised under impersonal conditions can have difficulty adjusting.

If expected to spend much time outdoors they are not suitable for cold climates. Italian Greyhounds are very athletic, and their jumping and climbing abilities can get them into trouble. They also have no traffic sense, and an Italian Greyhound that gets into the street is almost destined to be hit. Since they are hounds, they can be quite stubborn.

Should they be crate trained?

Certainly, but please don’t confuse crate training with house training. All dogs should learn to stay in a crate quietly for short periods of time, up to three or four hours; but a crate should not be used to confine an Italian Greyhound all day long every day while its owner is at work or play. Dogs are not intended to be caged animals like laboratory rats.

Unfortunately, many breeders find it easier to tell their puppy buyers to keep the dog crated when no one is at home than to explain the process of house training. Italian Greyhounds are lovers of warmth and can be stubborn about going outside when the weather is cold, wet or windy, and there is a tendency for owners to just keep them crated instead of addressing this issue.

The most successful house trained Italian Greyhounds are the ones that have free access to a dog door rather than having to learn to ask to go out.