Home » Breeds » American Golden Retriever: Is this the best Goldie for you?

Golden Retrievers usually don’t need special introductions. They’re one of the most popular dog breeds – not just in the US, but in the world!

They’re excellent family pets that leave trails of positive energy wherever they go.

But did you know that there are three types of Goldies? We’’ mention all of them, but let’s focus on what makes the American Golden Retriever stand out.

What is an American Golden Retriever?

The American Golden Retriever is one of the variations of this breed, but they’re the same with any purebred Goldie.

Let’s discuss a little bit about this dog’s origin. You can trace the history of Golden Retrievers back to mid-19th century Scotland where they were used for hunting and retrieving waterfowls.

This skilled hunting breed eventually made its way to North America and other continents, continuing its rise to popularity. Today, they’re the third most famous breed in the US and are ranking 8th in the UK.

People adored Goldens for their intelligence and sweet manner, which made them excel in other fieldwork like detection, search & rescue, and disability assistance dogs.

Goldens were first recognized by the British Kennel Club (KC) in 1913 and by the American Kennel Club (AKC) in 1932. Breed standards per club have evolved to adjust to the preferences of dog owners in their respective regions or country.

As per the United Kennel Club (UKC) breed standard for English Goldens, they have shorter and wavier hair that come in shades of cream, where some seem like they have a white coat with gold streaks.

They have a larger and broader box-like head and ears that are moderately-sized.

When it comes to behavior, the English variety is known to be calmer and way easier to train.

For health, although both types of Golden Retrievers suffer from similar illnesses, English Goldens can enjoy the most of their lifespan, which is 12 years.

We want to clarify that regardless of where they are bred, kennel clubs refer to all of them as “Golden Retrievers.” 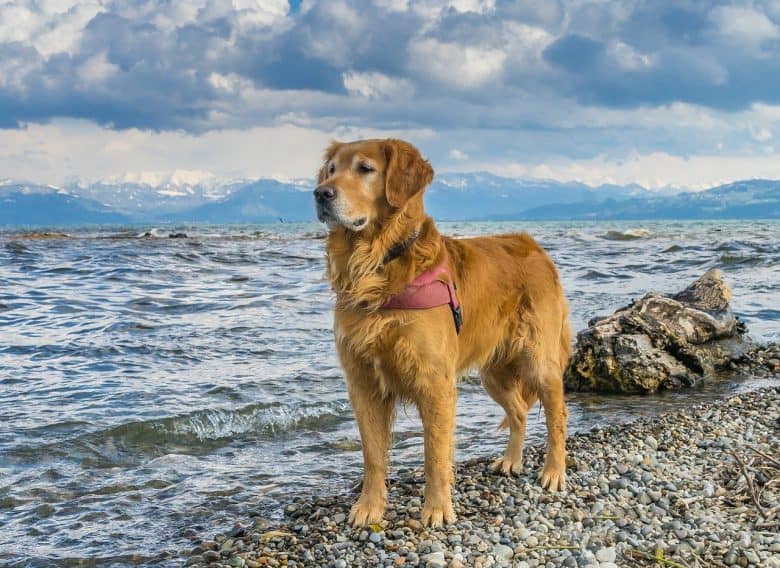 American Goldens also have a broad and arched skull with a bit longer and deeper face. They have short ears and closely fitted rims, with soulful eyes that are medium to large. At the other end of their body is a slightly curved tail.

The AKC breed standard defines their coat color as “rich, lustrous golden of various shades.” Any Goldie with a fur that’s too light or too dark is considered a fault or is not recognized.

All types have a soft undercoat and a water-resistant dense topcoat. Compared to other types, they have a straighter feathering and thicker coat.

Certain areas of their bodies, like their neck, thighs, and tails, have heavier feathering but not excessively long. If you’re planning to join dog shows, the natural look is always the best way to go.

How big do American Golden Retrievers get?

Although they’re smart and very trainable, Golden Retrievers are bred to be on the move.

Even if they can live in apartments just fine, we recommend them to a house with a safely secured, spacious backyard where they can run and play whenever they want.

Temperament: The American Golden Retriever as a pet

All Golden Retrievers are friendly, loyal, intelligent, and get along well with children. One trait that will make the American variant stand out is their energy level. They’re just a big ball of fun who are highly active and athletic.

Combine all that with their strong hunting instinct, and you get a never-tiring dog.

Since they love being a part of the family’s daily activities, it’s not good to leave this friendly pooch for extended periods because they tend to develop separation anxiety.

If they get frustrated and bored, expect a pet that goes through depressive moods, and gets destructive.

Want to see what it’s like to have an American Goldie? Check out this funny video:

This breed is generally quiet and will bark occasionally. But if you notice your Golden Retriever excessive barking, howling, or furniture chewing, these can be symptoms of separation anxiety.

It’s probably best that this fido lives in a home where they have a canine companion, or other pets to keep them company. Having a furry pal to play with can also help deal with your Goldie’s pent up energy.

We can consider Golden Retrievers to be low maintenance since they only require occasional brushing.

Some say they’re a high maintenance breed because of their size and the amount of hair they have, and they shed copiously. But what are its care requirements?

Does shaving an American Golden Retriever help with shedding?

No, it doesn’t, so DO NOT SHAVE your Golden Retriever. Any double-coated breed shouldn’t be shaved unless it’s the last resort due to their health or a really bad hair situation.

That thick coat helps them regulate their body temperature and protects their skin from different weather conditions.

By shaving off their beautiful hair, you’re ruining their natural insulation and will cause damage, not only on their fur but also their skin and health.

Damaging the hair follicle can also mean that their coat may never properly grow back.

Owning a Golden Retriever means you’re aware of the time and attention they’ll require. Care for your dog’s coat by brushing it daily, and for professional grooming, bring her to the groomer every two months.

Equip yourself with the best brushes for Golden Retrievers, such as a firm bristle brush, a Greyhound comb, and a de-shedding rake.

How much exercise do American Golden Retrievers need?

American Golden Retrievers are anything but lazy, so an hour or two of daily exercise will be sufficient.

There’s a saying that “a tired dog is a happy dog,” but you shouldn’t overexert your puppy to avoid putting pressure on their bones and joints that aren’t fully developed yet.

Doing so can lead to walking problems, and later on, hip dysplasia.

Aside from exercise, playtime, and training, provide activities that will mentally stimulate your dog. It can be as simple as a puzzle or a toy – anything that will make her think.

A diet recommended for an American Goldie

American Golden Retrievers are incredibly weight-sensitive, so aside from sticking to feeding routines, make sure that the type of diet and amount of dog food you give your pet is based on her activity level, age, and size.

Full-grown Goldies need to eat about 2 to 3.5 cups of food per day. Avoid high-calorie recipes because they can make Goldens grow too fast, which isn’t good for their bone development.

To help you choose the best dog food brand for your Golden Retriever, we have an article that can help you.

American Goldies have a slightly shorter lifespan than English Cream Golden Retrievers. The average life expectancy of the American Golden is 10 years and 8 months, while its British counterpart usually lives up to 12 years and 3 months.

Aside from cancer and regardless of the type, American Goldens share health problems, such as hip and elbow dysplasia, Gastric Dilation-Volvulus, as well as eye and thyroid problems.

An American Golden Retriever puppy can cost anywhere from $500 to $2500, depending on the breeder’s location, the kennel’s popularity, and the parent’s bloodline.

A good breeder won’t hesitate to show you health certificates and any documents that will help you get to know your potential pup.

They also wouldn’t just sell to anyone. Responsible breeders who care for their dogs will ensure that a buyer is the right match for their pup.

It’s easier to find purebreds online than designer dogs, which is a good thing, especially since the Golden Retriever is registered to legitimate associations.

Here are some websites if you feel you’re ready for an American Golden Retriever of your own:

Not only is adoption a cheaper option to get any dog breed or pet you want, but it’s also the best way to give a pooch another chance at love and a home.

If you’re ready to open your heart to an older Golden Retriever or even some of its mixes, check out these rescue sites:

Breeds Similar to the American and English Golden Retriever

Wondering what other Retriever breeds are out there? Maybe a dog that looks like Goldies?

These canines have similarities with American Golden Retrievers and the other types of Goldens, but they have something unique about them, too.

Should you get an American Golden Retriever?

American Goldens make for excellent pets if fitted with the right family.

They need an owner who can keep up with their energetic and playful nature, and someone who won’t leave them for long periods alone.

If you have small kids, Golden Retrievers will act like watchful older siblings, so that should tell you something.

You should also be ready to deal with these notorious shedders. Owning this pooch may not be that difficult, but any pooch with this size can’t be that easy to take care of.

Can you envision yourself getting an American Golden Retriever? Share your thoughts in the comment section below.