Known as JRD, Juvenile Renal Disease is a regretful diagnosis for any canine. It’s a degenerative disease that involves the incorrect development of the kidneys.

Because kidneys are necessary for dogs to function correctly, this disease almost always ends in death, usually before the dog turns 2 years of age. 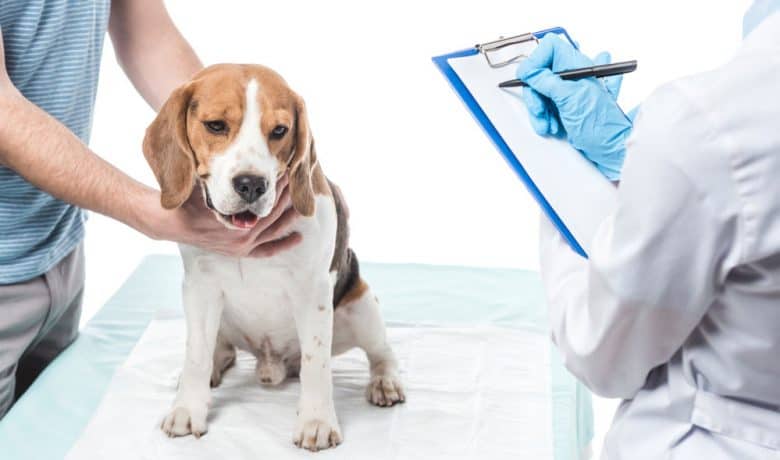 In this article, we’ll look at everything you need to know about this chronic, progressive condition. Stay with us, and let’s find out more about the disease.

In most cases, an ultrasound will reveal that they’re much smaller than they need to be.

And since they didn’t develop properly, they don’t work, as well. Eventually, this leads to kidney failure.

In other cases, there’s an issue with the way certain minerals are deposited, like collagen. This eventually leads to similar problems with the kidneys.

What are the different types of Juvenile Renal Disease?

Each kind of JRD is slightly different and caused by a somewhat different mechanism. Let’s dig deeper into them.

The first one, Collagenofibrotic Glomerulopathy, is a group of diseases.

It involves the build-up of type III collagen in the glomerulus, a small cluster of nerve endings in the kidney tubule, or small kidney tubes with cells that cleans and filter the blood.

This type makes the kidneys unable to filter the blood properly.

The second type is Alport Syndrome-like Nephropathy. This genetic condition is where dogs have progressive renal disease without any other symptoms.

It usually appears in families. This disease is likely hooked to the X-gene, according to some studies.

Some puppies less than 6 months of age can have proteinuria or having excess proteins in their urine.

This is the most common cause of Juvenile Renal Disease. Simply put, the dog’s kidneys do not develop properly, usually due to genetic reasons.

There’s an error somewhere in the dog’s genetic code that causes the kidneys to stay smaller and underdeveloped.

Over time, this wears the kidneys out and leads to renal failure.

Furthermore, it’s not considered linked to a sex chromosome since dogs of any gender can get it.

This progressive yet no cure illness is diagnosed when the dog is under 2 years of age, usually showing signs of chronic renal failure.

Symptoms don’t typically become present until the end-stage of the disease.

The cause will depend on the type of Juvenile Renal Disease. Generally, it’s completely hereditary. Other than that, JRD can be caused by:

And there are some situations where professionals think that infectious agents are another culprit.

This disease is known to affect tons of different breeds, popping up in new breeds all the time. So, its genetics are a bit confusing and not completely understood.

You can mostly expect to find it in only a few select breeds when a disease is genetic. After all, individual dogs in a breed carry a lot of the same genetic code.

But, this is not the case with this disease.

It may be that all these breeds have different genetic points that cause the same disease, or they may have all inherited the same faulty genetics way back in their bloodline.

But the most common cause of JRD is genetics. We may not understand the mode of inheritance completely.

And though studies are continuous to unravel the mysteries covering JRD, there’s currently no genetic test to determine if parents may pass this disease on to their puppies.

Usually, the nephrons of the kidneys are underdeveloped, which causes most of the problems.

What are the clinical signs of Juvenile Renal Disease in dogs?

The symptoms of Juvenile Renal Disease are a lot like the symptoms of kidney failure in general. The young dog will have increased thirst or polydipsia as the kidneys try to work extra hard to filter out the blood.

They may increase their urination, also known as polyuria, or not have much urination at all.

Some affected dogs will leak urine, but some will not. Many dogs will develop UTI or urinary tract infections.

As the disease progresses, the symptoms get worse. For instance, weakness, anorexia, lethargy, vomiting, and stunted growth are common and serious signs.

Weight loss can also occur. Most dogs are not diagnosed until they start exhibiting these more severe symptoms, as the increased drinking is difficult to notice.

Sadly, these symptoms usually don’t present themselves until the dog’s kidneys are mostly affected. Therefore, early treatment is often not possible.

Dogs begin to show symptoms as early as 3 months of age and before they turn 2 years old.

How is Juvenile Renal Disease Diagnosed?

Since there’s no test for this disease, in particular, the vet will determine that the kidneys are weak based on bloodwork and urinalysisabnormalities.

Then, other possible causes will be eliminated. It’s usually a diagnosis of elimination.

Sometimes, the underdevelopment of the kidneys can be seen on an ultrasound.

Renal biopsies are sometimes used, though rarely. Microscopic evaluation of the kidneys will show underdeveloped glomeruli.

Those are the capillaries that filter out wastes from the blood. Sometimes, renal lesions consisting of interstitial fibrosis are present as well.

There are some treatments for this disorder, but there’s no cure. The symptoms can often be managed, and the treatment is based on slowing its progression.

Nutritional management will help lessen the amount of work the kidneys need to do. A low-protein diet is usually recommended.

Vets may recommend medications for certain symptoms. For example, if a dog’s blood pressure is messed up, the dog may need meds to regulate it.

Similarly, your dog may need medication to increase calcium absorption or normalize red blood cell counts. Anemia is expected, so supplementation with iron may be necessary.

Supplements may be required to offset the loss of key nutrients.

Fluid therapy is often used in the beginning to flush out the kidneys and may be needed regularly to help the kidneys function better.

Can Juvenile Renal Dysplasia be prevented?

Because this disease is genetic, there is no way to prevent it. The only way it can be avoided in future puppies is to avoid breeding dogs that carry this disease’s genes.

However, because its genetic basis is not entirely understood, this is extremely difficult and not a solution alone.

Outcomes for dogs with JRD

Usually, the affected dog will pass away before they are 2 years old. Rarely, a dog may live longer than that if they begin treatment early.

The only way to determine that a dog is affected early is to have a littermate that developed the disease, prompting their owner to get them screened early.

Dogs rarely live their entire lifespan as their kidneys wear out. They can pass away in as little as 2 weeks in some cases.

Sadly, we’re still learning about Juvenile Renal Disease in dogs. There’s no current treatment or cure. Most treatments are palliative at best.

They don’t treat the condition directly, but they make the dog more comfortable and hopefully elongate its life.

Symptoms do not pop up until the kidneys are already struggling, so it’s challenging to treat these dogs early. Usually, dogs aren’t diagnosed until the disease has already progressed considerably.

Did you have a puppy or dog who suffered from Juvenile Renal Disease? Tell us your story so fellow pet parents can learn from your experience by leaving a comment below.