A crate is a portable “kennel” that is just large enough to contain the dog it is intended for, made of either metal or plastic. “Crating” is the practice of using this kennel for training purposes, usually in house-training and house-proofing a dog.

Crating is a controversial topic. There are those who believe that crate training is indefensible and others who believe that it is the solution to all their problems. The reality is likely somewhere in between.

What Does the Dog Think?

First, you must understand what the crate represents to the dog. Dogs are by nature den creatures — and the crate, properly introduced, is their den. It is a safe haven where dogs don’t have to worry about defending their territory. It is their own private bedroom, which they absolutely will not soil if they can help it.

Judicious use of the crate can alleviate a number of problems, stop others from ever developing, and aid substantially in house-training.

Where is the crate? It should be around other people. Ideally, set it up in the bedroom near you. Have the dog sleep in it at night. Dogs are social and like to be around their people. Don’t force your pet into the crate. Feed your dog in the crate.

Can Crates Be Abused?

Certainly. Anything intended for a dog can be abused. That doesn’t make it wrong; it does mean you need to know what you are doing. Things to remember:

A plastic airline-approved (leakproof) crate will run from $20 to $70 depending on the size. These are the cheapest prices available.

Wire cages are not as appealing to dogs who like the safe, enclosed nature of a crate, but they have better ventilation for use in warm places. You might, for example, have a plastic crate in your house and a wire one for the car. Since many models fold up, they are also often easier to transport and store. 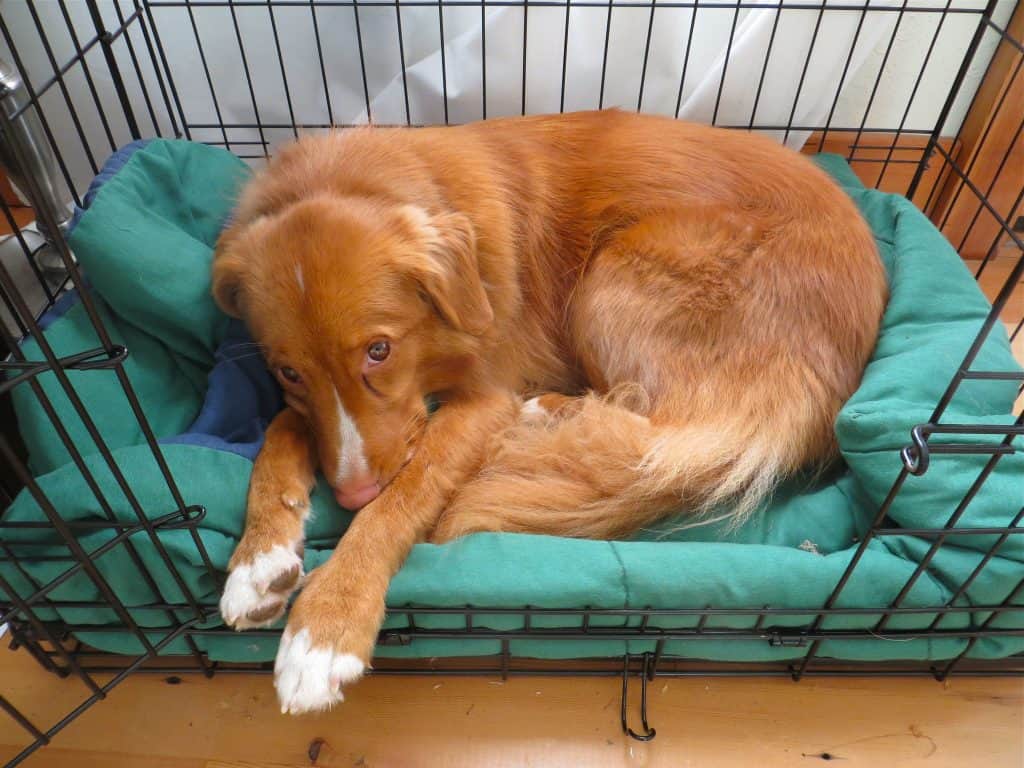 Think of your dog’s crate as a sort of child’s playpen. It’s their safe haven. (Photo: Jinx McCombs)Crating a puppy or dog often seems unappealing to humans, but it is not cruel to the dog.

A dog’s crate is similar to a child’s playpen, except it has a roof (dogs can jump out of a playpen) and is chew-proof. Also, a crate is not suitable for activity or exercise, but rather for rest. Dogs are carnivores and do not need to be constantly active during the daytime, like people (as gatherers) do.

If a crate is properly introduced to a dog (or puppy), the dog will grow to think of the crate as their den and safe haven. Most dogs that are crated will use the open crate as a resting place.

The major use of a crate is to prevent the dog from doing something wrong and not getting corrected for it. It is useless to correct a dog for something that they have already done; the dog must be “caught in the act.”

If the dog is out of the crate while unsupervised, they may do something wrong and not be corrected, or worse yet, corrected after the fact. If the dog is not corrected, they may develop the problem behavior as a habit (dogs are creatures of habit), or learn that they can get away with the behavior when not immediately supervised. A dog who rarely gets away with anything will not learn that if nobody is around they can get away with bad behaviors.

Dogs corrected after the fact will not associate the correction with the behavior, and will begin to think that corrections are arbitrary, and that you can’t be trusted. This results in a poor relationship. A dog’s lack of trust in your corrections is one of the major sources of problems between dogs and their caregivers.

A secondary advantage of a crate is that it minimizes damage done by a dog (especially a young one) to the house, furniture, footwear, etc. This reduces costs and aggravation and makes it easier for the dog and person to get along. It also protects the dog from harm by its destruction: ingestion of splinters or toy parts, shock from chewing through wires, etc.

A young dog should be placed in the crate whenever they cannot be supervised.

Dogs who are trained in puppyhood with a crate will not always require crating. Puppies or untrained dogs require extensive crating. After a year or so of crate training, many dogs will know what to do and what not to, and will have good habits. At this time, crating might be used only when the dog needs to be out of the way, or when traveling.

Remember, your ultimate goal in using the crate is to produce an easily house-trained dog and one who can be trusted in the house.

Therefore, you should consider the use of a crate for a dog to be temporary. You are always working toward the time when you do not need to use a crate extensively.

With house-training, it is only a matter of time for the pup to outgrow the need for a crate. As puppies get older, they will naturally develop ways of telling you that they need to go (but probably not before about four to six months, so be patient), especially if you encourage this.

As this starts to develop, you can decrease the crate usage. Always keep a close eye on your pup — the trouble you take now will pay big dividends later. If you need to, put a leash on your pup and attach it to your waist. That keeps the pup from wandering off into trouble. By the time your puppy is about 6–8 months old, they should be able to sleep through the night either in an open crate or a dog bed.

Many breeds, especially the larger and more active ones, will need to be crated during their adolescence until they can be trusted in the home, if you cannot leave them outside in the yard while you are gone. There are several things you need to keep in mind.

The first is that this type of crating is never to be a permanent arrangement except for those rare cases where the dog proves completely unreliable. While this does happen, it’s more common for the dog to be sufficiently mature by the time they are two or so to be left alone in the house.

To make the transition between keeping your dog in the crate and leaving them out when you are at work, start preparing your dog on weekends. Leave them in your house for an hour and then come back. Maybe it needs to be 15 minutes. Whatever. Find the time that works, and make a habit of leaving them unsupervised in the house for that long. Be sure to praise them when you come back. Leave the crate open — available, but open — while you are gone. When you know the dog is reliable for this period of time, gradually add 15- to 30-minute increments to the dog’s “safe time.” Don’t be surprised if this takes months or even a year.

Now, there are some dogs who are never reliable when left inside. This might include dogs who were rescued, dogs with separation anxiety, dogs who destroy things indiscriminately, or who mark or otherwise eliminate in the house.

Does Everyone Use a Crate?

Crates are extremely useful. But they are not the only means to achieve house-training or safety in the house or car. They are, in the opinion of many, one of the best and easiest ways of doing so, with many side benefits.