Owning a dog means you have to make sure that he grows into a well-behaved pet. The best way to do that is to establish yourself as the alpha leader.

He has to know that you’re in charge and he has to obey your commands. After all, it’s for his own good. However, maintaining dominance is easier said than done.

Keep reading to discover just how you can assert yourself as the alpha leader of your canine pack.

What’s the Big Deal about Being the Alpha Leader?

Dogs operate on a hierarchical social structure. Those at the top believe that they don’t have to follow any rules, except those below him.

That’s why you have to assert yourself as the number one in the pack — the alpha leader.

Canines with humans who are strong alphas do great in obedience training and don’t usually display destructive and aggressive behaviors.

While all breeds vary in submissiveness, dominant dogs literally require firm and strict alphas. Especially the boys who think they should be the alpha male.

Fortunately for those with submissive pets, owners just have to be calm and bolster the dog’s confidence.

A common misconception with alpha leaders is that they are bullies, but that’s not true.

A strong alpha leader is a confident guide that instructs and follows through on his commands with silent, controlled dominance.

This alpha-pack relationship is due to a series of learned behaviors and sound leadership that is essentially a two-way street between yourself and your dog.

How Do I Make Myself the Pack Leader of My Dog?

A firm pack leader asserts dominance in everything they do. It doesn’t mean you have to scare your dog to be submissive. You just have to ensure that your relationship with your dog has balance and respect. Here are some tips on how to show your dominance while being a good alpha leader:

Dog owners should have the same mindset as an alpha dog — you’re always first. Whether it’s inside or outside your home, remember that you should take the lead on everything.

Try to display the physical characters of an alpha, too. When your dog challenges or disobeys you, control your emotions and actions because dogs rely on body language.

If he sees you unstable or unbalanced, it becomes a window for him to take over.

It’s essential to remain calm and assertive all the time.

Ensure that your dog maintains good manners. He should only be allowed to do something when it’s a routine or a command that you’ve given, like jumping out of the car or eating his food when you say so.

It may sound rough, but this includes play. It should be initiated and stopped on your terms.

The moment a dog is allowed to come, go, and do as he pleases, that’s basically saying he’s in control.

Did you know that this applies to when he’s lying down on the floor? Alpha dogs will never walk around other members of the pack.

If he’s in your way, remind him where his spot for napping is by making a gentle noise with your feet.

And there’s jumping, which is another sign of dominance, especially if your dog is bigger than you and it gives him a chance to look down on you. It’s a literal act of authority so avoid it at all cost!

If your fido is a biter, give a sharp verbal correction whenever he tries to do it. Even if he’s not an aggressive dog.

You can watch this short video on how to train your puppy not to bite:

Remember how dogs communicate using body language? That means they can easily tell when their owners are anxious or nervous. And dominant dogs will take this as a cue to take charge.

You can use your emotions and actions together with verbal commands to stamp your authority and correct negative behaviors.

Your pet needs to understand that you mean it and you won’t beg for obedience.

4. Learn how to display alpha behavior

There are several ways that you can display alpha dog behavior. These include the following:

Set rules, boundaries, and limitations for your puppy from the get-go. This includes restrictions on personal space and where your dog is allowed to sleep, eat, etc.

Your private space, especially your sleeping area, should be yours alone. A dominant dog should never be allowed to sleep on the bed or sit on the couch. It’s because the alpha dog claims the best sleeping spot.

Sharing your space with a dog can make them see you as part of the dog pack, rather than the alpha leader.

Another important thing when training your pet is not to allow him to pull on the leash. Teach your dog to walk behind or beside you, and stop on command. This forces your dog to look to you for guidance.

6. Be consistent and clear with rules

Being an alpha leader is not about punishing your dog, so as using excessive force, or establishing fear. A good alpha leader is fair and makes the rules clear through consistent communication.

It’s the key to any dog training. And your family members should be aware of these rules so that your canine knows that they’re implemented with everyone.

Inconsistency, whenever your pup is being naughty, will make him challenge your rules.

7. Be consistent and fair in correcting bad behavior

Let your dog know that your rules can be trusted. If you have to correct him, it should be right after doing something wrong or bad. You shouldn’t also treat him poorly the whole day.

As soon as your doggo submits — dropping his eyes, licking you, rolling over onto its back — praise him and show approval using positive reinforcement.

This consistent method of addressing bad behavior should start from puppyhood but should develop into their adult years.

Many pet owners stop obedience training when a dog is still young or has finished learning where to potty.

However, constant maintenance is needed to prevent unwanted behaviors from developing or from your dog challenging your alpha role.

Controlling all your dog’s resources is another way to establish dominance over your pet. This often starts with food, so use mealtimes to your advantage.

Dogs should always be calm and submissive when feeding, not begging around the family table and only eating after you have done so.

You can send your dog outside while eating and not feed him in the same place every day. In this way, you are in control of where he eats.

Another way to control resources is to hide away toys. Toys can be given daily to your dog or released when your dog is well-behaved. Clear them up at night to let your dog know that you are in control of them.

Dogs love working or having something to do. This is an excellent way of showing your fido that he has to earn everything.

Give him tasks such as carrying his leash when walking or have him carry stuff from a backpack while running an errand.

If you want him to learn how to be helpful, he can learn search-and-rescue, tracking, and herding. There are a lot of activities to keep dogs busy.

Only reward your dog when he’s being a good boy, not when he’s begging or demanding attention.

Teaching your canine friend that he should respect you for being the alpha should also be a fun process. The right behavior should always be rewarded, but don’t try and force affection from your dog.

One of the ways to show your dog some love is through grooming. Regularly touching, petting, and handling your pet’s paws will teach him restraint while enjoying the cuddle time. 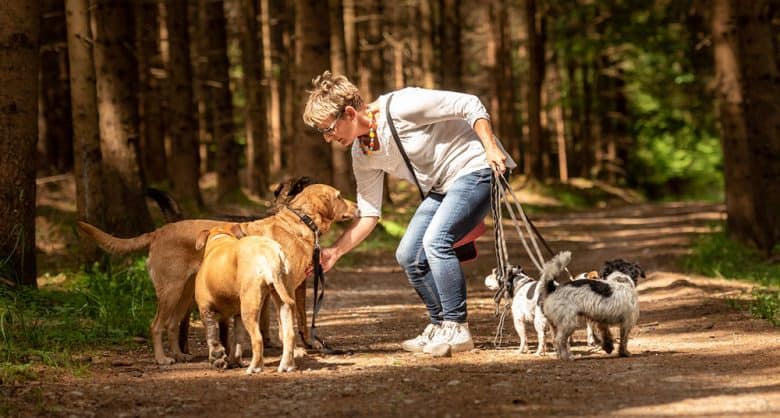 Wild dogs and domestic dogs have a pack mentality. So if you take in a dog, you have to step up and be the leader of the pack.

You should always be concerned for the well-being of the entire pack while offering protection and direction.

You’re not being selfish, but it’s an instinctive role — like being a human parent.

They want to follow someone who they can trust with their life. This means you should also earn your pet’s trust, loyalty, and respect. By setting rules and boundaries consistently, you’re doing just that.

What’s Not Part of Being the Alpha?

It may be hard to earn your dog’s respect, but you can easily lose it. Dogs don’t understand anger, so irrational owners are passing up the alpha position.

You have to be focused at all times. Getting flustered will make your dog feel that you can be pushed around.

How do wolves behave in the packs? Aren’t dogs just like wolves?

Several wolf experts, such as L. David Mech, have studied wolf behavior and their social hierarchy.

With wolf packs, one alpha leader is in charge and the rest of the pack of wolves are followers.

As the leader of the pack, the alpha is the strongest and smartest. He has to make all the decisions for other members of the pack, telling them where to go and how to live.

If you have more than one dog, you should notice that one, in particular, will be particularly dominant over the others. Pack members always look to this alpha before engaging in play or other activities.

Aren’t dogs just trying to be in charge?

Dogs that push boundaries and continually challenge their owners for the top dog position are few and far between.

They aren’t looking to be in charge or be the parent. They just want someone they can respect to fill this role.

Highly energetic or mischievous dogs aren’t necessarily challenging you for dominance. Still, they’re trying to determine the limitations, much like a small child.

While a puppy obedience course or private lessons with a dog trainer can help to establish some rules for your dog and lay down a foundation, even with an older dog, they are not the be-all and end-all.

Becoming the alpha leader in your dog’s life is a choice you make every day.

You need this to become an innate part of your daily routine and lifestyle. Once your dog sees you as his master, you also need to consistently stimulate his mind with new commands and advanced training.

Do dogs know who the alpha human is?

They do know who the human alpha is in the family. Dogs can be submissive to two humans, but they naturally favor one or the other when listening to commands.

Don’t assume that he considers this person as the dominant family member, but it can be the one who actively trains and discipline him.

Still, this person should always be backed up by other human family members when giving the dog instructions.

How do you tell if your dog thinks you’re the Alpha?

If your dog growls at you around food, stares into your eyes without turning away, pulls on the leash, or willfully disobeys your orders — he doesn’t see you as the alpha leader.

A dog that sees you as the alpha waits and allows you to be the first, as well as always looking to you for direction.

The Bottom Line: Be a Responsible Alpha Leader

Responsible alpha leaders are firm and calm while establishing dominance that can be harsh and trying at first.

It’s also learning to be a strong leader while your dog garners respect for you.

Any well-rounded and well-behaved dog is a reflection of a good alpha leader.

How are you as an alpha leader to your dog? Share your stories with us or your advice on how you show your pooch you’re in control by commenting on the box below.