Ticks are parasitic insects that come in a frustratingly wide array of shapes and sizes. And tick bites, although often harmless, can cause serious illness in both dogs and humans.

Not all tick-borne diseases in dogs have a vaccine, so preventive tick products are crucial. Early treatment is effective, as it helps determine the symptoms of these diseases. 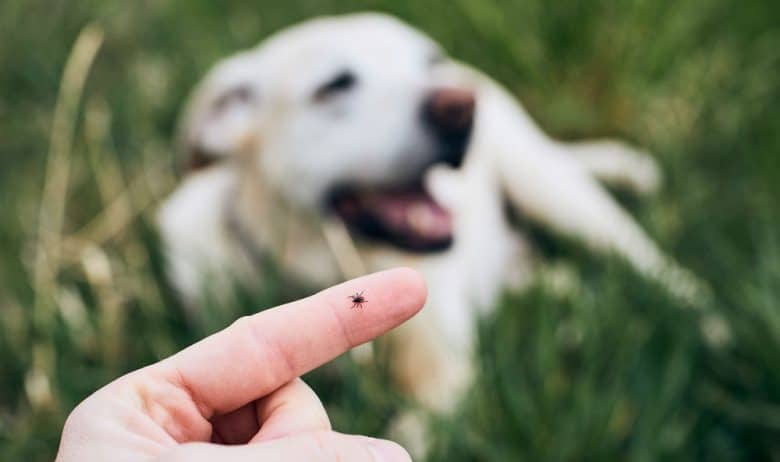 Learn about well and lesser-known tick borne-diseases and how to prevent them.

What are canine tick-borne diseases?

Tick-borne diseases happen when ticks transfer pathogenic microorganisms through their bites. The most common types are bacterial, but they can also spread viruses.

Research suggests that there are more pathologies related to tick bites than are currently recognized.

The most common of which are:

Tick-borne diseases can have similar symptoms, like lameness and lethargy.

But regardless, Doctors of Veterinary Medicine (DVM) prescribe broad-spectrum antibiotics to eliminate harmful microorganisms and probiotics to avoid gastrointestinal issues.

Some of the recently identified infections in the United States include:

Bacteria are tiny single-celled organisms that survive off their surroundings. Some are beneficial and promote healthy functioning in dogs’ bodies.

Others, known as pathogens, cause an imbalance or illness in their hosts.

Those tiny little lice and ticks mostly pass about bacterial diseases, so it is crucial to protect your dog against their bites.

What is Lyme Disease?

Also called Lyme borreliosis, this illness is caused by the Western Black-Legged Tick, or Deer Tick, that carries the Borrelia burgdorferi bacteria.

The ticks transmit the disease over 36-48 hours, where symptoms appear over the next few months.

Some of the symptoms of Lyme Disease in dogs include increased thirst and urination, mobility issues, fatigue, fever, and decreased appetite.

There are cases where it can result in more severe issues like arthritis and kidney disease.

The most widely used way in diagnosing Lyme Disease in its early and late stages is through blood tests, specifically the C6 testing method.

The C6 protein is specific to B. burgdorferi bacteria. The test identifies antibodies produced in response to this protein.

Lyme Disease is difficult to treat. A veterinarian may recommend getting the preventative vaccine and annual tests if you live in a tick prone area.

Working dog breeds such as Dutch Shepherd who can spend hours in the field must take caution.

Though owners can’t catch it from their infected pets, the tick carrying this disease can latch on to humans and infect us.

What is Canine Granulocytic Ehrlichiosis?

The Ehrlichia rickettsia bacteria species is responsible for this disease. The most common pathogen in this bacterial family of organisms is the Ehrlichiosis canis bacteria.

Symptoms appear within 1-3 weeks, while some infected dogs display signs after months or years. Others never develop symptoms at all.

The disease has three phases: acute, subclinical (where there are no visible signs), and chronic. Blood tests identify infection, as well as a polymerase chain reaction (PCR) test.

The pathogen must be present for at least 2-3 weeks for veterinarians to diagnose Ehrlichiosis. Vets use antibiotics to eliminate the bacteria.

No vaccine is available for Ehrlichiosis. And though humans cannot contract this bacteria from their furry friends, diligently checking your dogs for ticks and using tick-prevention products as a preventative measure is highly recommended.

What is Canine Anaplasmosis?

For this reason, co-infection is common. The symptoms of these two diseases often appear similar.

Thrombocytotropic Anaplasmosis is caused by the Anaplasma platys bacterium, which affects the ability of blood to clot.

You would need to take your dog to the vet so they can use a special testing kit to detect this disease. Veterinarians treat Anaplasmosis with a 2-3 week course of the same antibiotics used for Lyme Disease and Ehrlichiosis.

However, your dog may still test positive after treatment.

Transmission from dogs to humans hasn’t been documented and is considered unlikely.

What is Rocky Mountain Spotted Fever?

The Rickettsia rickettsii bacteria causes Rocky Mountain Fever. Despite its name, this disease is contractible across the US, including the country’s east, midwest, and grassy regions.

The parasite must be attached for at least 5 hours for infection to occur.

Symptoms include joint pain, swollen lymph nodes, reduced appetite, and fever. Wobbliness and other neurological issues follow with the progression of this disease.

This disease has a high mortality rate without timely and proper treatment. Blood tests are necessary to confirm a diagnosis. Treatment is aggressive, and the infection can last for two weeks if caught on time.

You can’t contract Rocky Mountain Fever from your dog, but the tick can bite and infect you.

What is Canine Bartonellosis?

Commonly known as Cat Scratch Disease, this infectious illness is transmitted to canines by Bartonellosis and not from an actual cat scratch.

Symptoms involve intermittent fever, as well as lameness. Sadly, there’s no known remedy for this particular disease caused by the Bartonella bacteria yet.

It shows high resistance to antibiotics and often requires a long period of multiple medications.

What is Tularemia in dogs?

Several species of ticks and fleas in the United States carry Tularemia. Also known as rabbit fever, this disease affects cats more severely than it does dogs.

Canine symptoms include a mild fever and a loss of appetite. Depression and lethargy are also common signs of Tularemia.

This disease has no vaccine yet, so prevention is vital. Veterinarians use antibiotics to treat the condition. Flea and tick bites cause the disease in humans, but you can’t catch it from your infected pooch.

What is Haemobartonellosis in dogs?

Haemobartonellosis, spread by both ticks and fleas, targets red blood cells. It causes weakness and anemia. The disease will not show visible signs, except for dogs with pre-existing conditions.

Treatment takes a few weeks and may include a combination of antibiotics and blood transfusions. Dogs with vulnerable immune systems are especially susceptible to this disease.

What are protozoal tick-borne diseases? 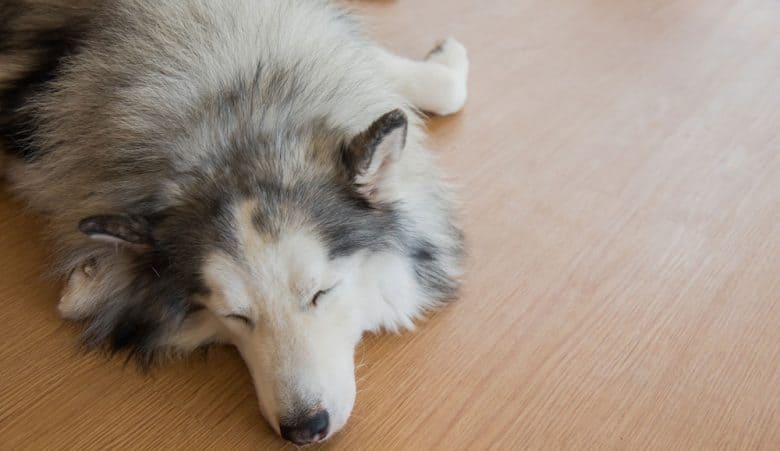 Protozoa is the same as single-celled organisms. While still microscopic, they’re bigger than bacteria and have their own cell structures making them more complex.

It’s parasitic protozoa that can cause devastating internal damage without prompt diagnosis and proper treatment.

To prevent this infection, careful attention to tick control is recommended and the avoidance of fighting and interacting with other dogs.

Formerly known as Piroplasmosis, this is one of the few infectious diseases that can be passed on by dog bites, specifically by canines with oral abrasions or lesions.

Babesiosis causes the red blood cells to break down, leading to pale gums, yellowed eyes, and dark-colored urine. Anorexia, anemia, lethargy, and depression are often associated with this disease.

Since there’s no current vaccine, your vet will recommend preventive measures like tick-repellent products.

What is Canine Hepatozoonosis (ACH)?

American Canine Hepatozoonosis is different from other tick-borne diseases. Instead of transmission through tick bites, the illness spreads through the ingestion of adult Gulf Coast ticks.

They can even contract this disease by eating rodents and birds with a tick in its larval stages.

ACH presents itself in a high fever, total lack of appetite, painful movement, muscle and weight-loss, as well as leaking eyes.

Veterinarians use antibiotics to treat this disease, but it can still be challenging to manage, and treatment can last years.

If left untreated, ACH can be draining and ultimately fatal. And humans cannot catch this disease from infected dogs.

Tick paralysis occurs when ticks secrete a toxin through their bites. The nervous condition may develop within 24 hours to a week of the tick bite.

Symptoms begin with weakened muscles in the back limbs. And as the disease progresses, more bodily systems become affected, including weakness in all four limbs, difficulty breathing, and trouble swallowing food.

With early detection and treatment, your pooch can make a full recovery. However, without any intervention, paralysis may spread. This can leave your dog incapable of moving, eating, and eventually breathing.

Treatment of tick-borne diseases in dogs

Currently, antibiotics are the most effective treatment for tick-borne diseases in dogs.

Many of these infections show subtle and sometimes similar symptoms, so it’s best to visit a vet the moment you suspect that your dog may have suffered a bite.

Bacterial diseases respond well to the antibiotic Doxycycline and several others, depending on the disease’s severity and development.

Improvement usually follows after a few weeks of antibiotics. However, if a bacterial infection is present in addition to a protozoal condition, antibiotics may not be enough.

Tick-spread protozoal diseases are a lot more challenging to treat and often require several medications. A treatment plan for these conditions may take months, if not years, to eliminate the disease.

How to prevent tick-borne diseases in dogs

Did you know there’s a particular method for removing ticks? Check out this video to learn more about the proper techniques:

Regular screenings and vaccinations are done annually for dogs spending extended periods outdoors or if you stay in an area where infected ticks are considered endemic.

Several products and medications deter ticks, like chewable supplements, drugs, and topical products, which you can apply to your pet before going outside.

Checking for ticks is the best way to spot an issue early on. This is more important during warm weather.

In hot climates and tick-prone areas, you’ll need to check for ticks all year round.

Embedded ticks can be tricky to remove as you don’t want to leave any insect parts attached. Otherwise, you may bring your pup to the nearest vet as a precaution.

While antibiotics are the most effective form of treatment, these conditions are hard to eliminate. Some even require hospitalization. Recovery can also take a long time, and recurrences are possible.

Your dog’s well-being and general spirits may improve before they’re back to full health. Make sure your dog continues with its medication and gets plenty of rest and water.

Frequent vet checkups and blood tests will help you stay ahead of any recurring symptoms. How long does it take for tick bite symptoms to show in dogs?

The answer to this will vary because some pathogens spread in a few hours, while others may take a few months. Underlying health conditions may accelerate the development of dog tick diseases.

No, certain tick species do. Some, such as the Western Black-Legged Tick and Deer tick, carry multiple diseases.

The American Dog tick transfers several pathogens, including those which cause Anaplasmosis, Babesiosis, and Ehrlichiosis.

Pathogens don’t cause Tick Paralysis. It’s actually a neurotoxin present in some tick saliva that triggers this disease, not a microorganism.

What diseases do dog ticks transmit to humans?

We want to clarify that most of these illnesses won’t be transmitted to humans directly by their dogs. The only time a person can get infected with tick-borne disease is if a tick carrying the disease bites him or her.

Most of the time, dogs bring home these ticks, which is why they must get checked after spending time outdoors.

Preventing tick-borne diseases in dogs is the key

If you find a tick on your dog, stay calm. As scary as all these diseases are, they’re easy to treat when caught early.

Use tweezers for extra precision and to avoid touching it. However, if the tick is too deeply embedded for you to remove at home, a veterinarian can help.

After successfully removing the tick, check the rest of your dog thoroughly as an extra precaution. It’s also best to consider having tests done to ensure your dog is healthy.

Any experiences with tick-borne diseases in dogs? Share your thoughts and preventive tips you’ve used for your pet in the comments below.