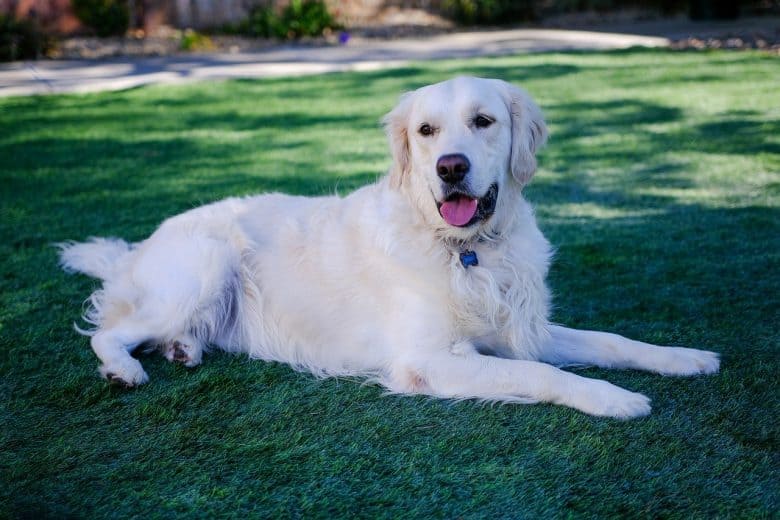 These dogs also often have a striking paler coat than your standard Golden Retriever, leading many to think they are a distinct brand new breed but that is not the case.

The English Golden Retriever at a Glance

We’ve put together a table below to give you a quick overview of the English Golden Retriever.

English Golden Retrievers are not really a distinct breed, however, there are two different breed standards in the world today.

Over the years of breeding Golden Retrievers, the two standards have deviated slightly in looks and demeanor, thus presenting slightly different variations of the same breed.

All Golden Retrievers can trace their lineage back to the 1800s and a Scottish nobleman by the name of Lord Tweedmouth.

In 1868, Lord Tweedmouth bred his Wavy Coated Retriever and Tweed Water Spaniel to create a dog that would have a soft grip, perfect for retrieval.

The Golden Retriever became favored for its ability to retrieve on land, as well as in the water.

Today, this breed is the third most popular breed in the United States and this beautiful and highly intelligent breed is also often used as a service dog or therapy dog due to its eager to please and loving nature.

Meet a Golden Retriever used in a children’s hospital in Texas here:

Are there other types of Golden Retrievers?

Back in the 1930s and 40s, most Golden Retrievers around the world looked quite similar, with many dogs sharing the same relatives.

This differentiation is now reflected in the breed standards for Golden Retrievers in these different countries which have been modified and adapted independently.

American Golden Retrievers normally have a middle of the range gold colour, with the AKC breed standards considering Golden Retriever’s that have too light or too dark a coat undesirable. 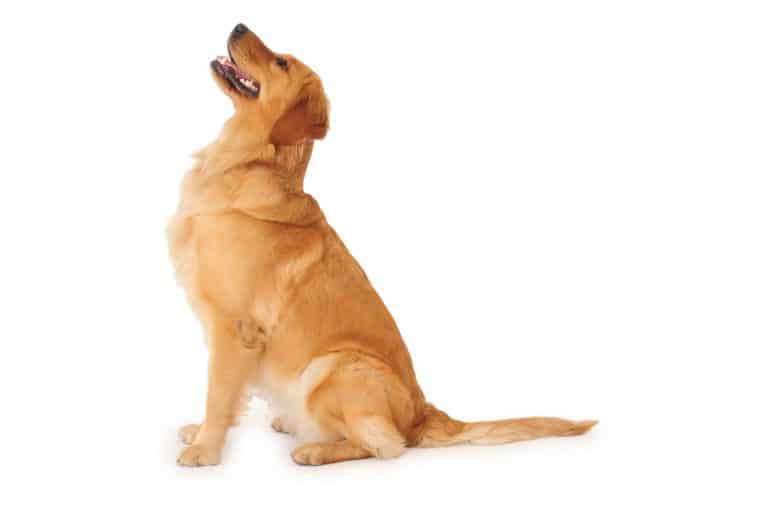 Breeders of American Golden Retrievers also tend to favour a lighter weight dog with less angular features but strong rear quarters and a penchant for showmanship. The coat of this regal breed is also often lusher and straighter than the English variant.

Dogs in the Western and Midwestern sections of the country resemble their American cousins while the Eastern Canadian Golden Retrievers tend to be more similar to the British variety. 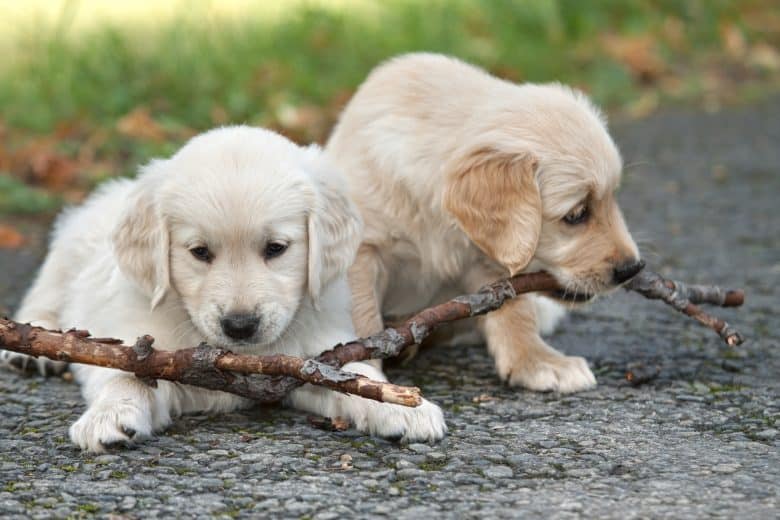 Similarly, the Canadian breed standards allow for all shades of gold, with a white-colored Golden Retriever seemingly well accepted throughout the country.

As mentioned previously, the different country-specific breed standards have resulted in slightly different appearances between Golden Retrievers, despite all dogs of this breed being descendants of Lord Tweedmouth’s original pup.

In general, the English or White Golden Retriever has more of a square-type body with a stronger, more robust front end.

When it comes to the face, its ears are set a little lower but the dog should have the puppy-dog-like round dark eyes that are typical of this breed.

White Golden Retrievers can also be slower to mature than their American cousins, only reaching full maturity at about four years of age. In addition, to a difference in size, a female White Golden Retriever will also weigh slightly less than a male dog with males coming in between 65 to 75 pounds (30 to 34 kg) and female English Golden Retrievers weighing around 55 to 65 pounds (25 to 29 kg).

Boys will also have a bigger blocker head than their feminine counterpart.

In fact, their color can range from light white to deep reddish gold with a variety of colors even found within the same litter of puppies.

In America, the term English Golden Retriever typically refers to a dog that is pale in color, never pure white but a light cream colour.

The coat of the White Golden Retriever can also be wavier than the American version and is not normally as long and fluffy. 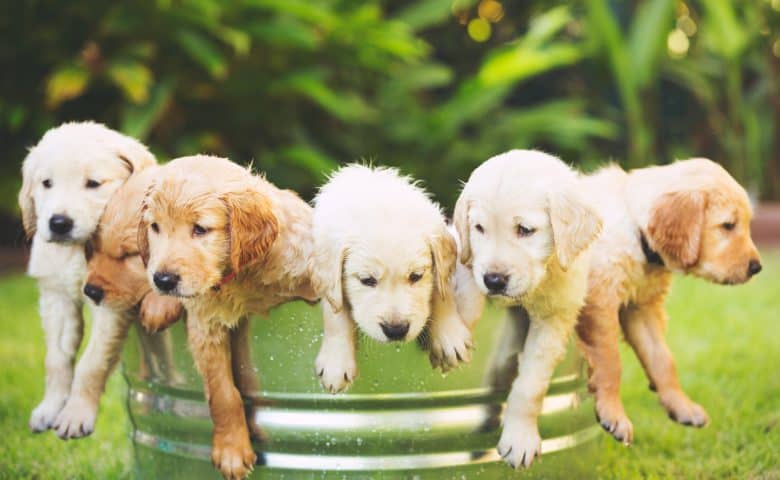 All Golden Retrievers are known for their loving, gentle temperaments, a trait which some people say is even more obvious in the English variant of this breed. While this fido may be less confident than its American version, they are extremely loveable and devoted dogs.

In fact, they love being a part of the family that they’ll get sad, and even depressed, if left alone, or stuck outside for hours on end.

They will, however, be quite happy to spend hours being dotted on indoors and their gentle nature makes them a fantastic choice for families and children of any age.

Renowned for their patience, these dogs will show love and affection to anyone and any animal, especially when properly socialised. Due to this, the Golden Retriever is not a good choice as a guard dog.

While they may bark at strangers their bravado will wear off as soon it looks as if a cuddle may be on the cards instead. 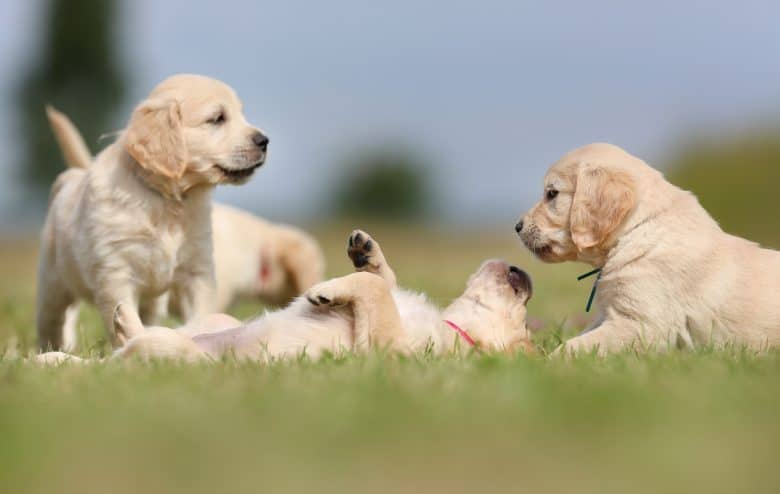 Looking after the English Golden Retriever

While Golden Retriever puppies are an adorable bundle of cuteness these energetic and playful pooches can be quite the handful.

While the English Golden Retriever will normally settle down from around two years old, these dogs require consistent training and a lot of love and attention in order to avoid any potential bad habits or health issues from occurring.

The active English Golden Retriever is naturally curious and will do well with an active, outdoorsy family. These dogs will easily adapt to life on the road, loving everything a good hike, walk, swim or weekend away camping has to offer.

For homebound Golden Retrievers, at least 1 hour of exercise a day are an absolute necessity while your dog will also love to play fetch with a frisbee or ball. This intelligent breed is also very good at learning new tricks and will do well with obedience or agility training.

Don’t miss: How to Train your Golden Retriever

Golden Retrievers are well known as heavy shedders. While some say English Golden Retrievers shed less than the American version this is not necessarily true and it is just that their coat is not as bushy. 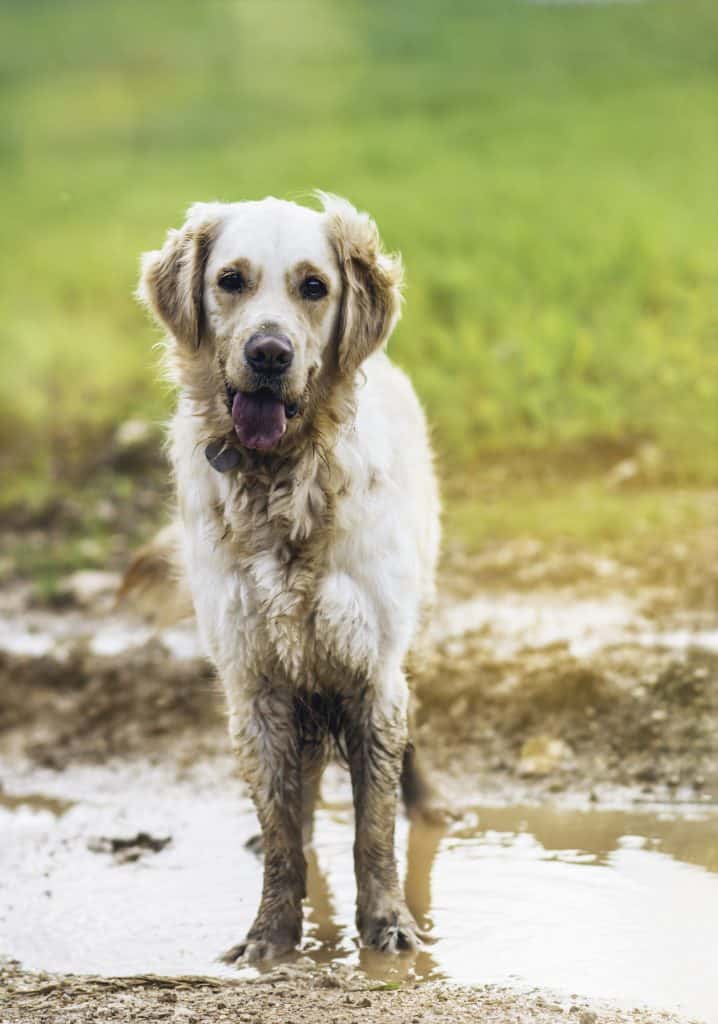 Coat length and density, however, does not affect shedding levels and these dogs will still shed all year round with two intense periods between the changing of the seasons when they shed their undercoat.

These dogs need to be brushed the full length of their body at least once a week and probably more in heavy shedding seasons to prevent mats from occurring.

The English Golden Retriever’s breeding history also means that these dogs love to swim or romp in the mud and bathing when dirty will be a necessity to keep their cream coats looking fabulous.

However, do be warned that overbathing your dog could lead to skin conditions such as Atopic Dermatitis so be sure to only wash when necessary using a specially formatted shampoo for sensitive skinned dogs.

Also clean and check your Retriever’s ears regularly to prevent any possible infections from occurring.

Don’t Miss: Tips on how to minimize Golden Retriever shedding

The Golden Retriever’s healthy appetite is both a good and a bad thing. This breed is not fussy with what it eats but this could lead to it eating things it isn’t supposed to!

As a result, try and keep treats healthy, like fruit or vegetables, while your daily dog food should be made up of about 30% protein, 30% carbohydrates and only 15% fat.

Daily dog food should be split between two meals a day, one at night and one in the morning, with 1 to 1 and a half cups each meal. If this makes up 80% of your dog’s diet then the extra 20% can be supplemented with healthy treats.

While an English Golden Retriever breeder may say that these dogs are less susceptible to hip dysplasia this has not been scientifically proven and hip and elbow ailments are common in all types of Golden Retrievers.

The best way to avoid these problems later on is to ensure your English Golden Retriever puppy’s parent dogs are health checked.

The English Golden Retriever may also face Osteochondritis Dissecans, another disease that affects movement when the cartilage and bone separate.

Other typical ailments that affect White Golden Retrievers typically focus around the heart and eyes, such as cataracts or Cardiomyopathy. 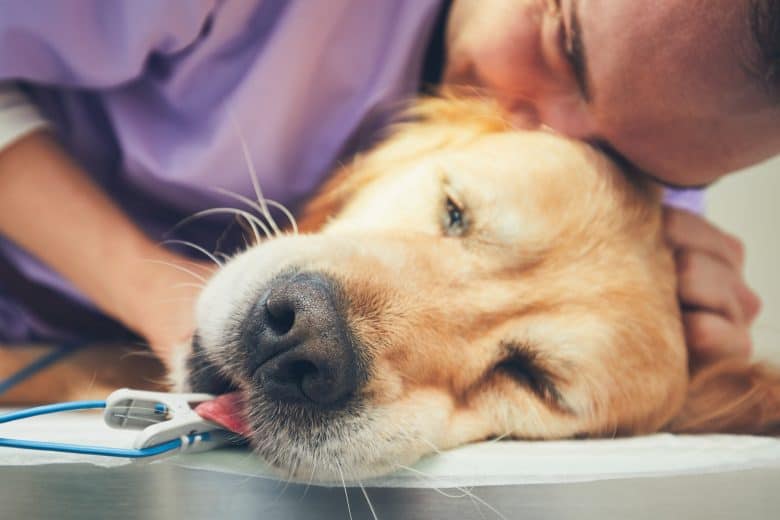 Where can I buy an English Golden Retriever?

While the coat colour has less effect on the price of a puppy, pedigree, location and breeder reputation will have more impact on how much your English Golden Retriever puppy will cost.

Due to the fact that the English Golden Retriever is not really a different breed, you may struggle to find a legitimate breeder for these dogs in the United States.

There is widespread misinformation about Golden Retrievers with paler coats, something that puppy mills take advantage of, marking up prices while using the words, imported, platinum or rare in their marketing.

The coat colour of a Golden Retriever can also change when they age so the most important thing to look for when visiting a breeder is to check the eyes, ears and nose of the puppy and to ask for the necessary health certificates.

Here are some breeders that specialise in lighter coloured Golden Retrievers to get you started on your search for a puppy:

If it’s a White Golden Retriever you are after, search on general Golden Retriever rescue groups or adoption groups where you may be lucky enough to stumble upon a dog with a pale coat in need of a loving home.

Here are a few of these Golden Retriever rescue sites:

Pros and Cons of the English Golden Retriever

While some breeders will try to charge more for these puppies, there is no real evidence to prove these dogs are healthier than other Golden Retrievers.

However, no matter their lineage the English Golden Retriever will be a great addition to your family with its kind, loving and playful nature!