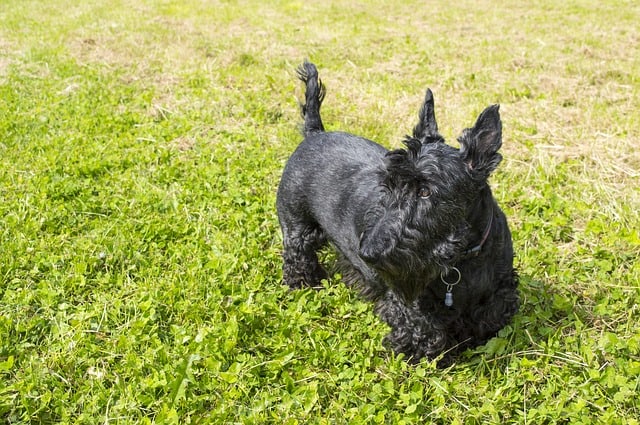 The Scottish Terrier is one of the descendants of the Old Scotch Terrier, along with the Dandie Dinmont, Cairn, and West Highland White Terriers. The exact origins of the breed are obscure, but a dog of the general description dates back to some of the earliest treatises on dogs in Britain.

The low stature and wiry coat have always been important characteristics to the original purpose of the breed, which was to hunt and kill the various species of wildlife that made life hard for the Scottish farmer and crofter.

These species included fox, badger, wildcat, weasel, otter, and the ubiquitous rat. Losing one or two lambs could mean the difference between eating well that winter and starving to the poor farmer, and so a dog was developed that had exceptional strength and courage, in a compact, tough package.

These traits are still the hallmark of the breed today.

All dogs shed, but the wire-coated terriers, which includes the Scotties, grow hair differently than many dogs, so they shed less than the short-haired breeds.

Are they good with children?

Yes, if the child is old enough to respect the dog’s body, and to understand that the dog has feelings, too. Scotties will generally try to hide from an abusive child, but will bite if cornered, or pushed hard. For this reason, they are not generally recommended for families with very small children.

Does this breed require lots of grooming? 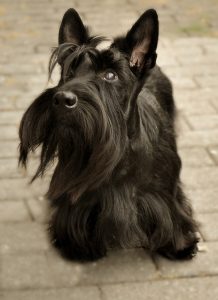 In a word, yes! They require regular brushing and trimming four to six times a year. Regular bathing is NOT recommended, however, as the skin dries out too easily.

Show dogs are stripped, the hair being pulled out when long and dead, or blown, but pets should be clipped, as stripping is time-consuming and expensive at groomers’.

I wage nuclear war on fleas, as the breed is relatively sensitive to them. A Scot can chew itself almost bald in next to no time, trying to get one flea!

What about exercise requirements?

The Scot is actually an active breed and can become destructive if not given enough mental and physical stimulation. The short legs do mean less walking for the human partner to get the dog its daily requirements.

Seriously, this is not a good jogging or marathon partner, but an ideal walking companion. ON LEASH, please, as the hunting instincts can draw the dog after a rabbit, into the path of a car. The Scot is tough for its size, but not that tough!

They can be, but this varies a lot within the breed. They are territorial and will announce visitors repeatedly and loudly. Human visitors they know are welcome, but animal visitors, invited or not, are repulsed with serious fury!

One cannot consider the Scot a serious protection breed, but they will inflict damage to even the most threatening person if they feel their owner is in danger. The teeth are bigger than you would suppose.

What sex makes the best pet?

Most of the people who contact me assume that a female pup will make the best pet. Since both sexes will be neutered, the former reasons for this being the case no longer apply. In general, I feel that the male pup makes a better pet for most people.

Bitches I have owned tend to be more reserved with strangers, while the male dogs I have owned, bred or rescued have been more outgoing and happy-go-lucky. From my experience, I recommend the male as the “better pet”, although there will be other opinions among other fanciers and breeders.

Do they make good obedience dogs?

If you are looking for a High-In-Trial, no. A challenge, yes. The Scot is one of the breeds bred to work independently of human direction. If the dog is nose to nose with a badger, it cannot take the time to come out and ask “may I attack now, please, or would you prefer me to wait?”

Thus, obedience as a formal task is rather foreign to the breed. Some Scots obtain advanced degrees, but the majority are not temperamentally suited to it. However, all dogs should learn basic good manners and certain general behaviors, such as coming when called.

Puppy Kindergarten Training is wonderful socialization for a young Scot to learn, to avoid dog-aggressiveness later in life.

Are the blonde ones Scotties, too?

This is definitely the most asked question to anyone with a wheaten Scot. There are many different colors acceptable in the breed; black, shades of brindle, and wheaten being the major classes of color.

Wheaten ranges from a pale golden to a deep red. White, however, is not an acceptable shade of wheaten, nor is it in the standard as an approved color. 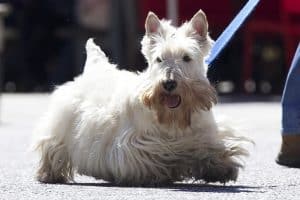 The standard of the breed describes the ideal Scottish Terrier, and no one dog lives up perfectly in every regard. In general, a Scottie should resemble the standard as closely as possible. The closer to perfect, the more likely the dog is to earn a championship.

A dog can still have major faults and be a good Scottie, but should not be used for breeding. Being a good pet is nothing to be ashamed of, rather the opposite! But with the pet overpopulation problem in this country, only the very best representatives of any breed should reproduce.

This is not just in conformation terms of course, but temperamentally and medically as well.

The Scottish Terrier Club of America is the official parent club and guardian for the breed. The breed is registered for show purposes with the American Kennel Club and may earn titles through this organization.

The breed may also be shown at events licensed by the American Working Terrier Association and may earn titles through this organization as well. Titles include Championship (conformation), Companion Dog through Utility Dog Excellent (obedience), Tracking Dog/TD Excellent (tracking), Junior, Senior and Master Earthdog (instinct/working) through AKC.

The Scottish Terrier is afflicted with a few heritable disorders of varying severity. There is a blood test for only one of these, unfortunately. Responsible breeders do everything they can to reduce and eliminate these disorders from their breeding stock, but genes can re-combine in unexpected ways, and so even the best-laid plans can go awry.

The most serious disorder is a bleeding/clotting disorder called von Willebrand’s Disease (vWD). For a Scottie to be a bleeder, i.e., have abnormally long, perhaps life-threatening non-clotting times, both parents must be carriers, as the gene is dominant/recessive in inheritance.

After several years of work, with funding from the Scottish Terrier Club of Michigan, AKC, Morris Animal Foundation, and others, a team at the Michigan State University has developed a definitive genetic test for Type III vWD in Scottish Terriers.

The test is DNA based, with samples collected using a soft brush on the inside of the cheek of the dog. It is non-invasive and painless. The results of the test place the dog in one of three categories: clear, carrier, or affected. The test is 100% accurate.

As a result, all breeders should test animals being bred to ensure that no carriers or affecteds be bred to anything other than a dog that has tested clear. If two clear dogs are bred together, it is a certainty (barring an individual random mutation) that the puppies will all be clear as well.

All puppy buyers should demand to see the test results on the parents of the puppies they consider.

The tests are available only from VetGen, a spinoff organization of the MSU and University of Michigan. The cost is $135 per dog and $5 for the sample collection kit. For an additional $15, the results can be registered with the OFA, who are administering a vWD registry for VetGen, 800-4-VETGEN.

The Scottie Cramp is a neuromuscular disorder treated in severe cases with vitamin E and mild tranquilizers. It is not painful for the dog, but afflicted animals should not be bred.

Cranio-Mandibular Osteopathy is a disease shared with Westies and Cairns, as close cousins. It involves abnormal growth of the bone in the jaw of the afflicted puppy. It is severely painful and should be eliminated from a breeding program.

At this time the only test for carrier status in a dog is to test-breed. Treatment of the afflicted pup involves high-dose steroids and intensive nursing by the owner.

Of course, Scotties are just as susceptible as any other breed to viral and bacterial transmissible diseases, cancer, accident, gum disease, etc. Normal health care by a licensed veterinarian is very important to Scot’s health.

There is a current debate on the heritability of epilepsy, and hypothyroidism, diabetes, and other immune-mediated diseases. It seems likely that there is a genetic component to these problems, but the exact mode of inheritance is likely to be polygenic, and never completely predictable.