Home » Breeds » Types of Rottweilers: Is Your Rottweiler German, American, or Roman?

Rottweilers are more than just intimidating-looking guard dogs, this beautiful breed can also make loving and calm family dogs. But did you know there are different types of Rottweilers? 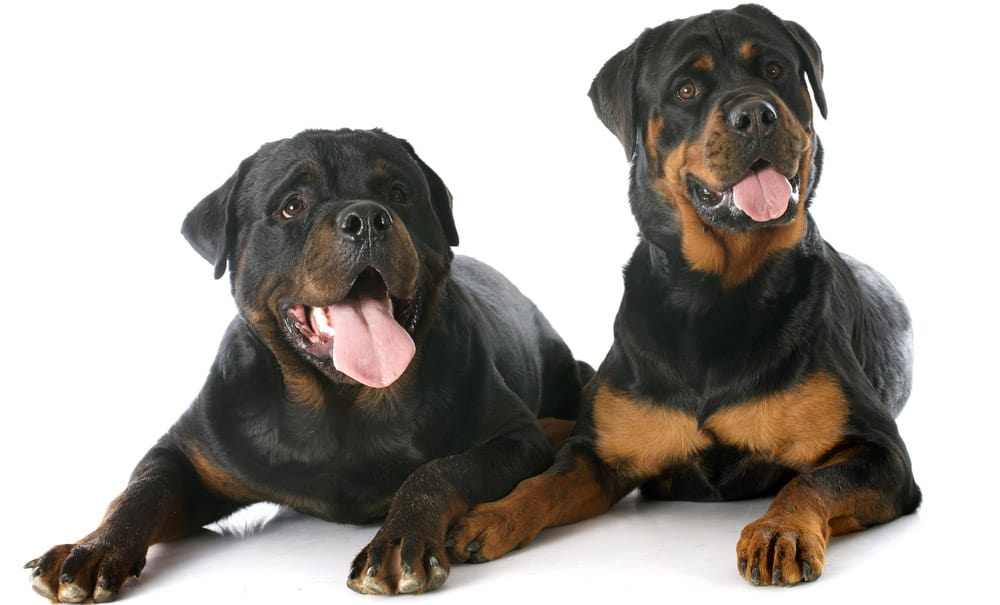 In this article, we will detail the distinctions between German, American, and Roman Rottweilers, giving you insight into the varying appearances of the different types of this dog as well as their temperament.

What are the Different Types of Rottweilers?

The American Kennel Club, or AKC, recognizes all types of Rottweilers as one breed; however, the breeding standards of this dog do vary between Europe and the United States. This gives rise to slight variations in the breed.

Germany has stricter standards when it comes to breeding Rottweilers through the Allgemeiner Deutscher Rottweiler-Klub (ADRK).

Rottweiler puppies born in Germany cannot be registered unless they pass strict breeding criteria. As a result, these dogs share more similarities with the original ancient Roman Rotties.

Today’s German Rottweiler was first recognized in German studbooks in 1901, and the name comes from the town of Rottweiler in Germany, where these dogs were first bred.

German Rottweilers are known as working dogs with a lot of energy and a cheerful demeanor.

This makes them considerably bigger than American Rottweilers with broader bodies, a muscular chest, and squarer heads.

Another distinction of this variation of Rottweiler is that they will not have docked tails, and tail docking is prohibited. German Rottweilers have an average life expectancy of 10 years.

Meet a German Rottweiler in this video:

American Rottweilers still work as herding dogs in today’s world but have also been used to pull carts, in police work, and as guard dogs.

Although these dogs have a strong, muscular build, they are more of medium size when compared to their German cousins. These dogs typically have a docked tail

The Roman Rottweiler is also known as the Giant Rottweiler. Sometimes these dogs are not purebred Rottweilers but are a cross between a Rottweiler and some type of Mastiff.

These dogs feature an oversized appearance and can grow up to 30 inches (76cm) tall. Female Roman Rottweilers are not quite as large but still are very tall, standing between 24 and 29 inches (61 and 74 cm).

Male Roman Rottweilers have an average life expectancy of between 10 and 12 years, while females can live to be 14 years old.

These dogs have a muscular appearance with a broad head and strong jawline. Unlike American and German Rottweilers, their eyes are typically round rather than almond-shaped and set back in the skull.

Quick Comparison Between the 3 Variations of Rottweilers

Are you looking for a quick comparison between the three different types of Rottweilers? The following table will help you gain a better understanding of this breed.

What are Other Types of Rottweilers?

But which of these types of Rottweilers are legitimate, and what is simply an unethical way for dodgy breeders to make some extra money?

Some people might believe that Rottweilers with tails are not Rottweilers, but this is not the case. Rottweilers that do not have their tails docked are still Rottweilers and not some other breed.

All Rottweilers are born with a tail; the docking process removes this tail when the dogs are only about three days old.

In fact, in Germany, the practice of tail docking has been banned since 1999.

Do not be fooled by breeders advertising rare Rottweilers. Rare Rottweilers are often not purebred dogs, and standard Rottweilers have been bred with other breeds to create specific colors or size variations.

These pups will typically be sold at a lower price and not marketed as unique just to get some extra money.

What is the rarest Rottweiler?

As discussed, when looking for a Rottweiler puppy, you should instead look for one bred to the strict AKC or ADRK standards. It is best to avoid rarities that could be mixed dogs from unsavory dealers.

What are Some Additional Rottweiler Crossbreeds?

Some breeders may purposefully choose to mix the Rottweiler breed with other dog breeds to achieve hybrid vigor and try and maximize some of the best characteristics of two different dog breeds.

Here are some of the most common Rottweiler crosses.

What are the Different Rottweiler Colors?

If you see a breeder marketing Red, Blue, or Albino Rottweilers, stay away as these are not bred to breed standards and could be crossbred.

What is the biggest breed of Rottweiler?

As working dogs, German Rottweilers are known to be committed, loyal pooches who are fiercely protective of their pack.

That said, any variation of Rottweiler should not be aggressive. Despite being used as guard dogs, Rottweilers will not go looking for fights but should be generally calm, although wary of strangers.

Amongst their family, the American Rottweiler, in particular, is quite affectionate and fun-loving, and they are even great with kids.

Which type of Rottweiler is easy to train?

German Rotties are patient, intelligent, and easy to train. As a result, many German Rottweilers are used as service dogs, therapy dogs, and police dogs.

Similarly, Roman Rottweilers are also easily trainable with remarkable intelligence. These dogs love to please their owners and thus will be pretty submissive and eager during training.

Which type of Rottweiler sheds the least?

Do different types of Rottweilers have different health issues?

All Rottweilers are predisposed to developing specific joint disease and hip dysplasia conditions. As is the case with the Roman Rottweiler, breeding this dog to be abnormally large can lead to more health problems.

These massive dogs are more susceptible to joint and orthopedic difficulties than other types of Rotties. In addition, Roman Rottweilers are also prone to snoring and overheating.

Are Rottweilers good for a first-timer owner?

Rottweilers are not recommended for first-time pet owners. These are strong, muscular dogs that can be stubborn, and training and exercising them requires a great deal of endurance.

While they can be good family pets, you need to be committed to socializing these dogs from a young age so that they don’t develop aggressive tendencies towards strangers.

Which Type of Rottweiler is Right for You?

As you have read, while there aren’t different breeds of Rottweilers, there are variants of the breed that depend primarily on your Rottweiler’s country of origin.

The main differences in the Rottweiler varieties are the dog’s size and whether or not the tail is docked. When it comes to personality, all of the different types of Rottweiler share a similar affectionate, calm, and loyal nature.

When looking to purchase a Rottweiler puppy, it’s best to always look for one that complies with the breed standards and has been raised by a registered dealer.

Stay away from backyard breeders that will try and sell you unique or rare Rotties just to make some extra cash.

Do you have a special Rottweiler at home? We would love to know more about him and what type of Rottweiler he is in the comments below.