Home » Breeds » Is the all-American Boston Terrier a good dog for you?

Also known as a Boston Bull or Boston Bull Terrier, the small but muscular Boston Terrier is much loved not only in the United States but also in the rest of the world.

This endearing dog breed is also known as “The American Gentleman” because of its adorable tuxedo-style coloring. 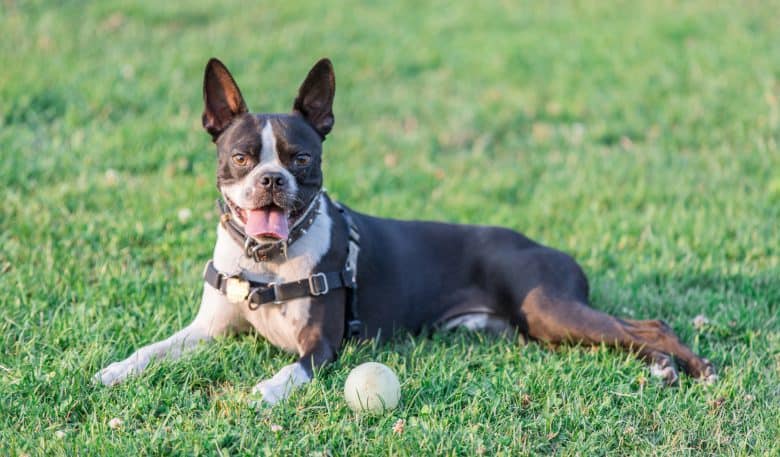 Are you thinking of getting a Boston Terrier to call your own? Keep reading to discover everything you need to know about this feisty pup.

Where did the Boston Terrier originate? 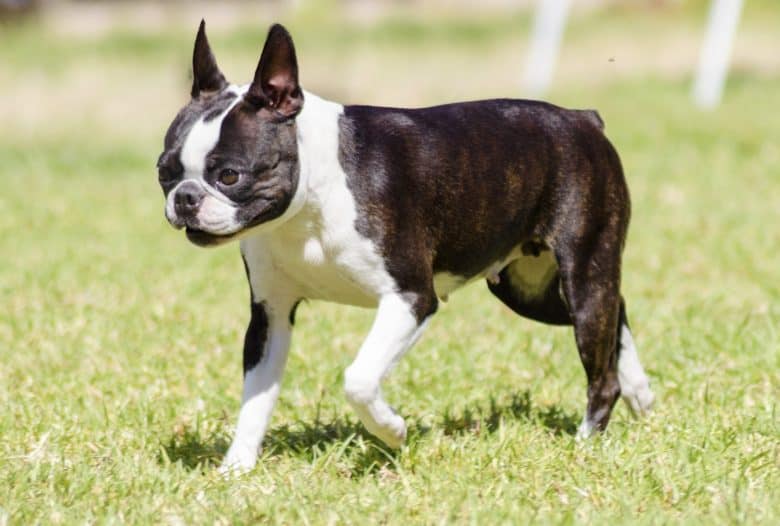 Boston Terriers were originally bred as fighting dogs in the late 1800s.

They were thought to have been created by crossing the White English Terrier, a now-extinct breed, with the English Bulldog, to make a pit fighting breed.

However, another tale of the Boston Terrier’s history links them to a dog named Judge, an English Terrier Bulldog cross owned by Robert C. Hooper in 1865.

It is also possible that Hooper purchased Judge from a Bostonian known by William O’Brian in 1870.

Either way, Hooper’s Judge is the dog responsible for the Boston Terrier breed. Weighing around 32 pounds (15 kg), Judge was a brindle color with white facial markings and stocky, well-built stature.

Judge was bred with Burnett’s Gyp, or Kate, a 20 pound (9 kg) white dog of which the puppy, named Well’s Eph, was widely bred.

This included being coupled with a golden brindle dog named Tobin’s Kate. These puppies were further bred with French Bulldogs to form the dog we know today as the Boston Terrier.

The American Bull Terrier Club was then founded in 1889, with the dogs being referred to as Bull Terriers or Round Heads.

However, this name didn’t sit well with Bulldog enthusiasts and fanciers.

So the breed club changed their name to the Boston Terrier Club of America, Inc., taking the name from Boston, Massachusetts, the home of Judge and the breed’s birthplace.

The Boston Terrier breed was officially recognized by the American Kennel Club (AKC) in 1893.

It is recognized as one of the first non-sporting breeds to be bred in the United States and only one of 10 made in America breeds of dog.

In 1915 these dogs were the most popular breed in America, and they withheld their position in the top ten breeds until the 1960s.

Today, Boston Terriers are still a trendy dog breed in America, including at Boston University, where the mascot is a Boston Terrier named Rhett.

Although small in stature, Boston Terriers are not a light, delicate breed and, as a result, do not have a fragile form that can be hurt easily.

As per AKC’s breed standard, Boston Terriers are typically muscular and stocky with a broad chest and a boxy shape.

Their head boasts a square-set jawline and large distinctive ears that stand upright. 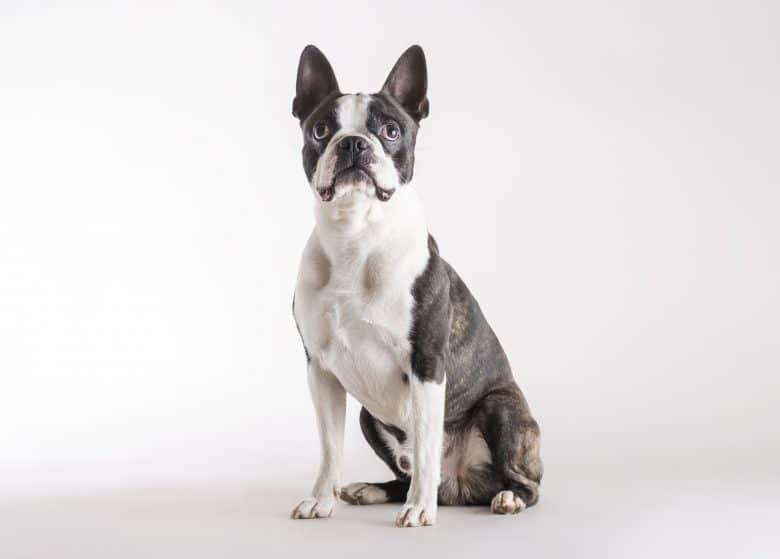 Sometimes the Boston Terriers’ ears are cropped but are best left as is. The tail is short and set low and should not be docked.

These dogs belong to the group of brachycephalic dogs, which means that along with having a flat nose, they have a short upper jaw, giving their face a squashed appearance.

Many brachycephalic dogs suffer from respiratory and breathing problems.

How big is a Boston Terrier?

This dog breed does come in three different weight groups:

Due to their small size, Boston Terriers are well-suited to any type of home, including those without a yard, even in their heaviest weight class.

This dog breed even makes the perfect pet for apartment living.

The Boston Terrier’s coat and colors 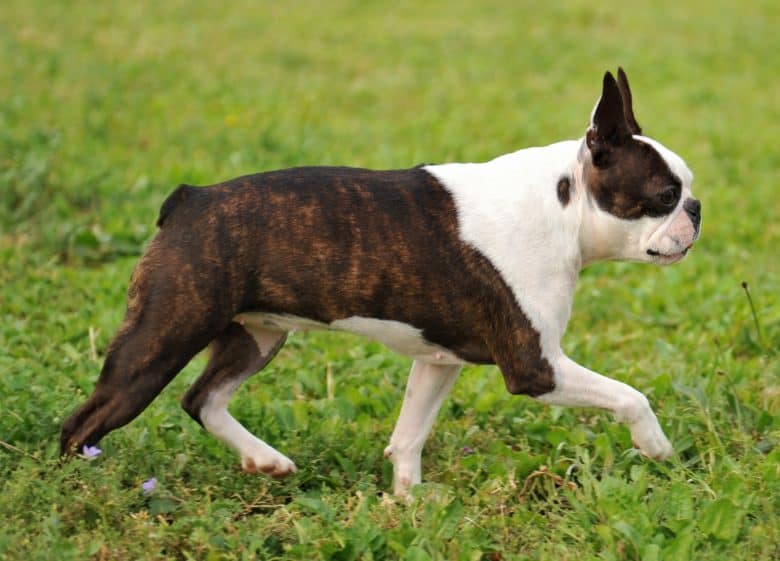 Boston Terriers are known for their distinctive white markings or blaze in their face, muzzle, and chest, and a tuxedo-style coat that’s short and smooth.

Their fur comes in three colors – brindle, black, and seal, black with a red sheen.

Be cautious of breeders selling solid-colored or rare-colored Boston Terrier puppies because they do not conform with the breed standard and can be a mixed breed. 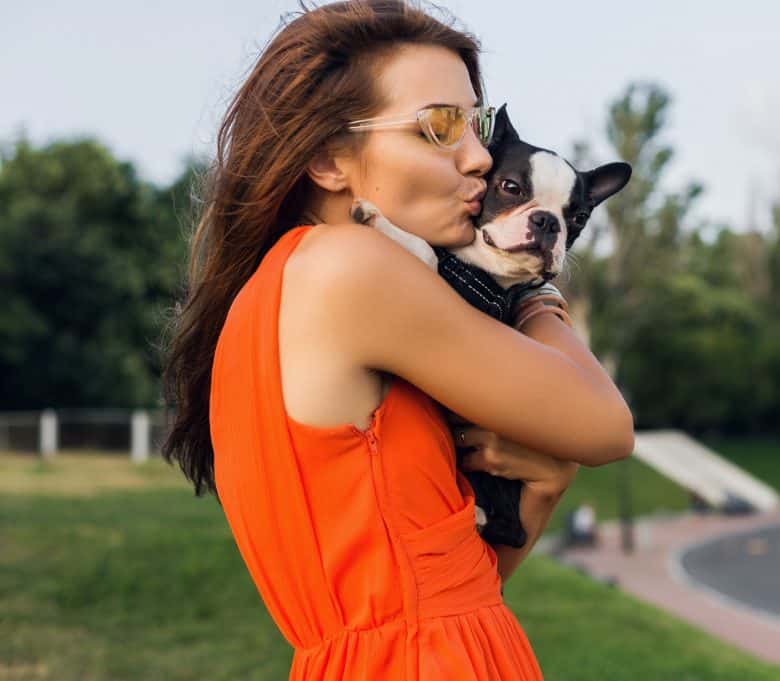 They are happy when playing, and their sturdy build means children won’t easily injure them, but they are also equally delighted cuddled up on the couch with their family.

Boston Terriers are known for their highly affectionate and extremely loyal nature and will likely follow you around much of the day.

While typically friendly to other dogs and even cats, they can posture when they feel their space is invaded. This is more common with the males of the breed.

Be careful when raising this breed not to allow your Boston Terrier to develop Small Dog Syndrome.

This can cause your Boston to think he is the boss of you and can lead to many behavioral issues.

Do Boston Terriers bark a lot?

Boston Terriers are not typically noisy dogs, and so do not make excellent watchdogs, but early training is essential with this breed, which can have stubborn tendencies.

In particular, house training a Boston Terrier can be a challenge as these dogs can throw tantrums if they don’t get their way.

Patience is key when training a Boston Terrier while treat based rewards will keep this breed motivated.

Crate training is also recommended, and try to avoid punishing your Boston Terrier as this can cause this sensitive breed to shut down and become depressed.

Check out this adorable video of a Boston Terrier having a chat with her owner:

Can Boston Terriers be left alone?

This intelligent breed can suffer from separation anxiety if left alone. Also, with spurts of hyperactivity, these dogs can destroy things if left alone for long periods.

However, these smarts and this energy make the Boston Terrier easily trainable for canine sports. These dogs love obedience and agility challenges and learn new tricks or join a game of flyball.

How to take care of your Boston Terrier

The Boston Terrier’s short coat makes it difficult for this breed to adapt to adverse weather conditions, and these dogs will need to sleep indoors.

Also, these dogs can overheat easily because of their short nose as they struggle to cool the air they take in. Boston Terriers are lively dogs with an average to a high energy level that needs interaction and a moderate exercise level.

That said, they are relatively inactive inside, and a daily 20-45 minute walk and some additional playtime will be enough to keep your Boston happy and healthy.

When walking your dog, you may want to use a harness as this brachycephalic breed can struggle to breathe if it pulls on its collar. Also, be sure not to exercise your Boston Terrier in sweltering conditions.

You might find your Boston Terrier likes to swim and if so, be sure to provide your dog with a life vest to keep them safe in the water.

Grooming needs of the Boston

Easy to groom, Boston Terriers shed minimally, and their coat can be kept shiny and healthy with a regular brushing routine.

Also, be sure to check their large ears for redness, which can mean infection.

Your dog’s teeth can also be brushed twice a week to prevent bacteria, and nails should be trimmed at least twice a month. Failure to do so could lead to painful tears.

The rest of your Boston’s body can be wiped down with a damp cloth and dry shampoo, or give them a proper bath when they are filthy.

How much should I feed my Boston terrier dog?

The recommended daily amount of dry dog food each day for this small breed is between 1/2 and 1 and 1/2 cups. This food should be split into two meals.

High-quality dog food will reduce the likelihood of flatulence, which is common in this breed.

Although slow eaters, Boston Terriers tend to overeat, and obesity can easily set in if your dog’s diet is not strictly monitored.

Feeding your dog too many calories can lead to several diseases, including diabetes, high blood pressure, and arthritis.

How long do Boston Terriers live?

Healthy Boston Terriers have a lifespanlife span of between 10 and 15 years.

During this time, Boston Terriers are particularly prone to developing several eye problems such as corneal ulcers, cataracts, and cherry eye, a genetic condition seen in puppies.

As a brachycephalic, short-snouted breed, Boston Terriers are also known to drool, snore and snort. Alongside their risk of overeating, they can also suffer from reverse sneezing and allergies.

Other common health ailments that affect Boston Terriers include hip and elbow dysplasia, which involves movement, deafness, patellar luxation, which causes pain and problems in the kneecap.

Other possible illnesses include megaesophagus, hypothyroidism, dystocia, hemivertebrae, and Thrombopathia.

How much does the Boston Terrier cost? 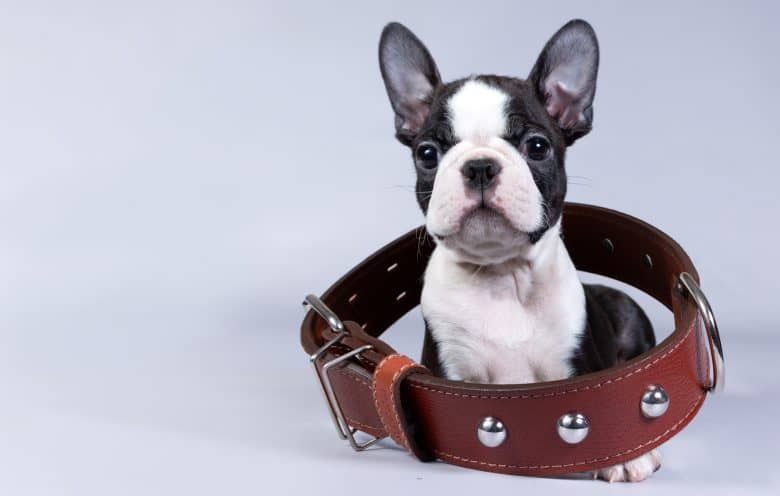 Due to this breed’s popularity, you may need to join a waiting list to get a Boston Terrier puppy from a top breeder.

Also, Boston Terrier litters typically only produce about three or four puppies, although getting just one puppy in a litter is not uncommon.

Due to issues with whelping, Boston Terrier puppies are sometimes delivered by cesarean section.

That is why it’s essential to get a puppy from a reputable breeder who can provide you with the necessary health screening documents.

Also, be sure to choose a well-socialized Boston Terrier puppy that has been raised in a home environment rather than in a cage or a kennel.

Here are a few breeders to get you started on the search for your very own Boston Terrier puppy:

Although adorable, owning a Boston Terrier does not come without its challenges, and this breed is often bought by owners who do not know how to care for this dog’s needs adequately.

Thus it is not uncommon to find Boston Terriers looking for a new home at a rescue or adoption center.

If you want to rescue a Boston Terrier, here are some places to start your search:

Although the Boston does have some of his Bulldog ancestors’ traits, French Bulldogs or Frenchies are different dogs entirely.

French Bulldogs have shorter legs and a sturdy small frame with some other miniature breeds’ frailty.

These gentle, attention-seeking dogs have similar personalities to Boston Terriers and, as a result, are also often used as therapy dogs. They, too, can be easily trained.

One characteristic that sets French Bulldogs apart from Boston Terriers is their bat-like ears.

However, like Boston Terriers, they also have an expressive face, and in fact, this is one of the leading reasons this breed is so popular.

While there are no official miniature or teacup Boston Terrier mixes, these are just generally small Boston Terriers bred for their tiny size.

Always be wary when buying a Boston Terrier that is mainly advertised as a teacup or slight variant.

This popular mix features the Boston Terrier’s flat face and prominent eyes with the bat-like ears of the French Bulldog.

Despite being super cute, this mix breed is fraught with a variety of health issues.

Cross a Boston Terrier with a Pug, and you will also end up with another famous cross, known as a Bugg. These smart, low maintenance dogs make loving, affectionate pets.

However, like the Frenchton, this Boston Terrier mix can inherit some severe health problems.

Who should get a Boston Terrier dog?

While easily adaptable to a range of environments, these dogs need strong leadership to avoid displaying their dominant or stubborn streak.

Also, without proper training, you may find the Boston Terrier challenging to housebreak.

Do you have a Boston Terrier? Let us know in the comments below.

1 thought on “Is the all-American Boston Terrier a good dog for you?”