Chihuahuas have long been associated with being high maintenance as their owners. There’s a popular expression used to describe these little critters, and that’s “big dogs in small bodies.”

They’re filled with spunk and energy, but did you know that they come in even smaller bodies? The Teacup Chihuahua can sometimes be half the size of standard Chihuahuas.

So let’s find out how big Chihuahuas get and what age they’ll stop growing. Stay with us!

Overview: A few fun facts about the Chihuahua

A well-loved breed, there are a few things about the Chihuahua that you might not have known.

The Chihuahua has two distinct head shapes. One is the commonly known Apple Head Chihuahua, while the other is known as the Deer Head Chihuahua.

The key difference is that Deer Heads have larger ears and a longer muzzle. They’re also thought to be bigger than Apple Head Chihuahuas.

Aside from the head shape, the Chi can also sport a short or a long coat.

Short-coated Chihuahuas are referred to as smooth-coated. The AKC accepts both coat types, and their coat length doesn’t affect their size.

What is the average size of a Chihuahua?

Now you might be thinking how big will my Chihuahua puppy will turn out?

They average at around 6 inches (15 cm) tall, but the smallest Chihuahua stands at only 3.8 inches (9.65 cm) and holds the Guinness World Record for the smallest dog in the world. This pooch is only 1 pound (0.45 kg)!

To get an idea of how big your Chi will grow up to be, you can take a look at your puppy’s parents or their current weight. We have a growth chart below, which can better illustrate your pup’s estimated adult size.

Generally, small breeds reach their full size when they are 6 to 9 months old as opposed to large breeds’ 1.5 to 2 years.

If used in breeding, the male dog should always be smaller than the female to avoid birthing complications.

How much should my Chihuahua weigh?

Chihuahuas can grow up to 6 pounds (3 kg), but they can also be as small as 4 pounds (2 kg), especially if they’re a Teacup Chihuahua.

These tiny Chihuahuas can be as healthy as their standard-sized counterparts if acquired from a reputable breeder.

Oversized Chihuahuas that grow over 12 pounds (5.4 kg) or more are most likely mixed and not purebred.

How can you tell how big a Chihuahua will get?

According to professionals, you can “guesstimate” your dog’s final height by measuring it at six months old. Multiply the number with 100 and divide the final answer by 75.

Growth charts can give you a quick insight as to whether your puppy is developing the way it’s supposed to and if there’s any cause for concern.

It shouldn’t replace a veterinarian’s medical opinion, nor should you rely on it solely in determining whether your pup is healthy. 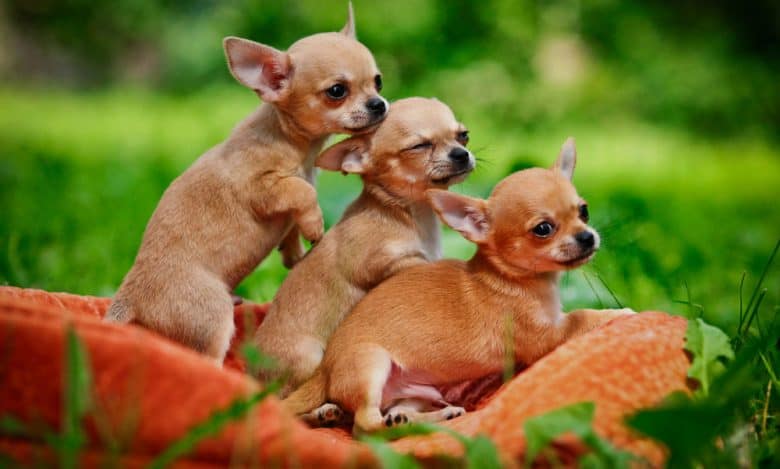 If you’re curious to know how much your full-grown Chihuahua will weigh, you will have to look at your puppy’s weight. It can give you an idea of their adult size.

Do note that the estimated weight might be off by a tiny bit.

We have a Chihuahua weight chart below detailing its projected weight in both imperial and metric systems for easy viewing. If your pup doesn’t meet their projected growth, please bring him in for a checkup at the vet.

** Do take note that this chart is only a guide to give you an idea of how big Chihuahuas can get in general. Even if you have a female or male Chi, your dog can still be bigger or smaller.

Also, those that weigh less than 6 lbs (2.72 kg) are preferably based on their AKC breed standard.

Besides keeping an eye on their weight, you should also make sure that they’re developing well. Giving them age-appropriate stimulation can ensure that they grow up to be well-adjusted adults.

Newborn puppies are born weighing just a few ounces/grams. They will experience rapid growth in their first few weeks of life, doubling in size in a matter of days.

These delicate pups should be placed in a warm and safe location as they are susceptible to freezing to death.

After what seems like their initial growth spurt, Chihuahuas will seem to taper off as they continue to grow. It might seem sporadic and less obvious, but they should gain weight steadily. Any plateaus should be cause for concern.

A one-month-old should be handled frequently to acclimate them to humans. This is called their socialization phase, and they should be safely introduced to their environment and given a chance to explore.

They should be given their vaccinations and rehomed by the time they are two months old.

These tiny pups can sometimes reach their adult size in this age bracket. They’ll stop growing taller or longer and only gain weight instead.

Separation anxiety might set in as they become more aware of their surroundings. They will also enter a ranking phase where they learn the rules of the household. 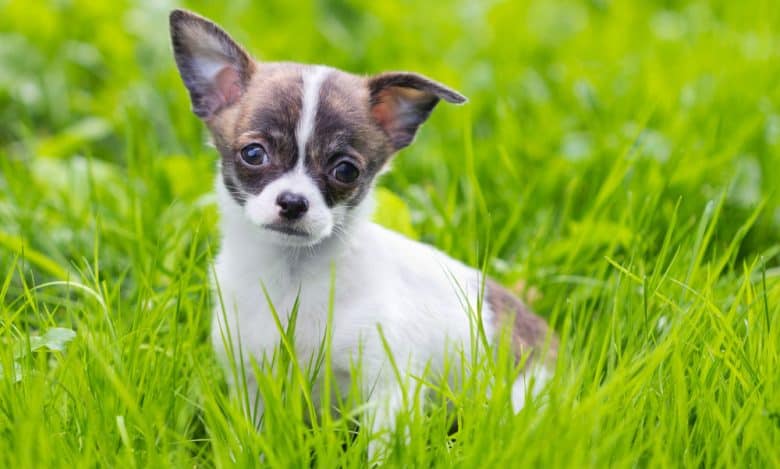 Carrying pups at this point should be avoided as it could reinforce small dog syndrome.

At the four-month mark, they should be nearly housebroken, and they will begin teething. As they reach sexual maturity at six months old, their activity level will wind down.

Puppies will mature into their full size if they haven’t already. You’ll notice a more obvious tuck-up as they lose their baby fat.

They’re growing into their adult form, which is sleeker and leaner. By this stage, they should be exhibiting adult behavior and be alert but not hyper.

Some owners notice that their Chi’s chest widens a little bit after they hit the 18-month mark, and that’s completely normal.

If anything, it’s to be expected. Aside from that, they should not exhibit additional weight gain or growth.

FAQs: 8 things you should know about your Chihuahua’s growth

Still have some follow-up questions regarding your Chi’s growth and appearance?

We’ve compiled a few commonly asked questions that can help you further understand how these wonderful little doggos develop as they age.

Chihuahuas are an active breed and shouldn’t have any problems with obesity unless they have an underlying health condition. This doesn’t mean that they should look gaunt.

On the contrary, puppy Chis have a round body shape with fat reserves to insulate them from the cold.

Some pups lose a little of their weight in the first one and a half years. They should get sleeker with age as they lose their puppy fat. At NO point should their ribs protrude.

Aside from during puppyhood, they shouldn’t have a round belly, especially not one as big as Beckham:

It’s considered cruel to overfeed your dogs as it can cause loads of health problems. Plus, it stops them from living their best life.

2. How to weigh a Chihuahua?

Ensure that your Chi is on the right track by weighing him every week or even daily, especially if he’s very young.

Human scales are not sensitive enough to pick up on gradual changes nor detect very light puppies. Veterinarian scales can be quite pricey.

For an affordable alternative, food scales work great for weighing your Chi pup.

Genetics plays a big part in determining how big or small your puppy will grow up to be. However, it’s not the only contributing factor. Diet, activity, and health are all things that can affect your pup’s growth rate.

It should be a well-balanced diet composed of adequate protein, amino acids, fatty acids, calcium, phosphorus, carbs, and fiber. Insufficient nutrition could cause the puppy to be stunted.

Too much physical activity could also stunt your puppy’s growth. As delicate breeds, they should not be encouraged to jump from high places.

Even going down the steps could hurt their growth plates. Once fractured, it would stop developing or grow incorrectly.

4. Health issues that can influence a Chihuahua puppy’s growth

Chihuahuas don’t have many genetic health issues. Low blood sugar is a common occurrence, not due to their breed but due to their tiny size.

That’s why they should be fed small meals several times a day instead of just one or two larger meals.

Diseases will most certainly curb your puppy’s growth. Parasites such as roundworms, whipworms, and hookworms can affect their nutritional intake and wreak havoc on their development.

That’s why it’s necessary to stay on top of your pup’s deworming schedule.

On the flip side, if your puppy has a disability that prevents him from being active, it could cause unhealthy weight gain.

5. Dangers of stunted or accelerated growth

It’s challenging to know if Chihuahuas are growing properly because they’re so little. If your puppy is underweight, you should increase his food intake.

Keep monitoring his growth, and if the additional food is not doing anything, you should consider going to the vet to rule out any underlying illnesses.

6. At what age does a Chihuahua puppy stop growing?

Chihuahuas usually get close to their adult size by the time they’re six months old. Their growth will taper to a stop around the one-year mark. Some might stop growing at two, but that’s very rare.

7. What’s the best age to spay/neuter a Chihuahua?

The best time to spay females is right before their first heat, which generally occurs between six to eight months. The optimum time to get your female Chihuahua fixed is around three to six months old.

Since the Chihuahua is not at risk for developing these problems, neutering them before six months is recommended, so they don’t develop any territorial behaviors such as marking.

While spaying and neutering have always been recommended for their health benefits, recent studies show that fixing your dog could lead to certain health problems. Castrated animals tend to be obese.

That being said, there are also benefits to neutering, such as eliminating the risk of having unwanted pregnancies or tumors.

8. Will my Chihuahua still grow after being neutered?

Yes! There’s no reason that your Chihuahua will stop growing after he’s neutered, so don’t let that stop you.

If you’re hoping that neutering might curb some of his behavioral problems, you should talk to your vet to better manage your expectations.

Particular concerns can be exacerbated with neutering due to the sudden drop in hormones.

Is your Chi on track based on our Chihuahua growth chart? 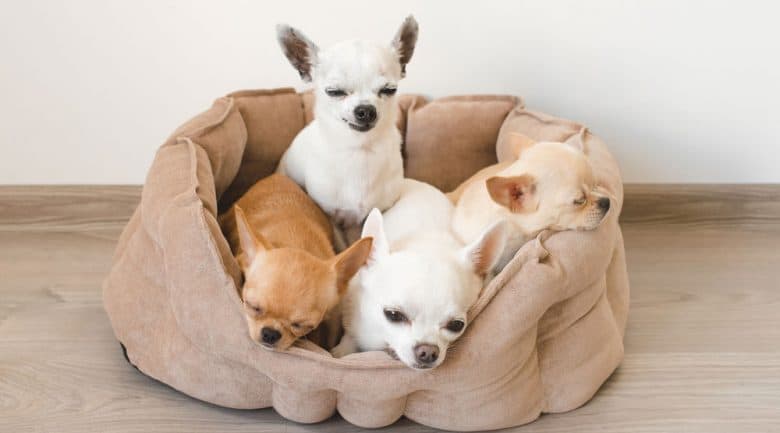 No matter what size your little Chi grows up to be, he’ll always remain one of the smallest dog breeds in the world, with the Yorkie and Dachshund ringing in second.

These tiny dogs are great companions, and only Chihuahua owners know what a joy they are.

Isn’t this breed the perfect size to bring anywhere? How big or how small is your fido based on our Chihuahua growth chart? Let us know below!