Looking for a dog that is the perfect combination of loyal, sweet, friendly, and courageous? Look no further than the Golden Retriever Pitbull mix.

These beautiful dogs combine all the best of both the Golden Retriever and the American Pitbull Terrier into one playful pooch.

Ready to find out more? Let’s get digging!

The Golden Retriever Pitbull Mix at a Glance

We’ve put together a table below to give you a quick overview of the Golden Retriever Pitbull Mix.

A quick intro to a Golden Retriever Pitbull mix

You probably won’t be surprised to learn that this dog is made up of a mix of a Golden Retriever and an American Pitbull Terrier. It’s important to know a bit about the parents of this dog, because most puppies are the result of first generation breedings.

That means they can have an unpredictable mix of traits from each parent – and even two puppies in a litter might be different from one another.

The Golden Retriever is a medium-sized dog first bred in Scotland in the 1800s. They were bred to work alongside their humans as a water retriever. It has a beautiful, long golden coat, which is where it gets its name. 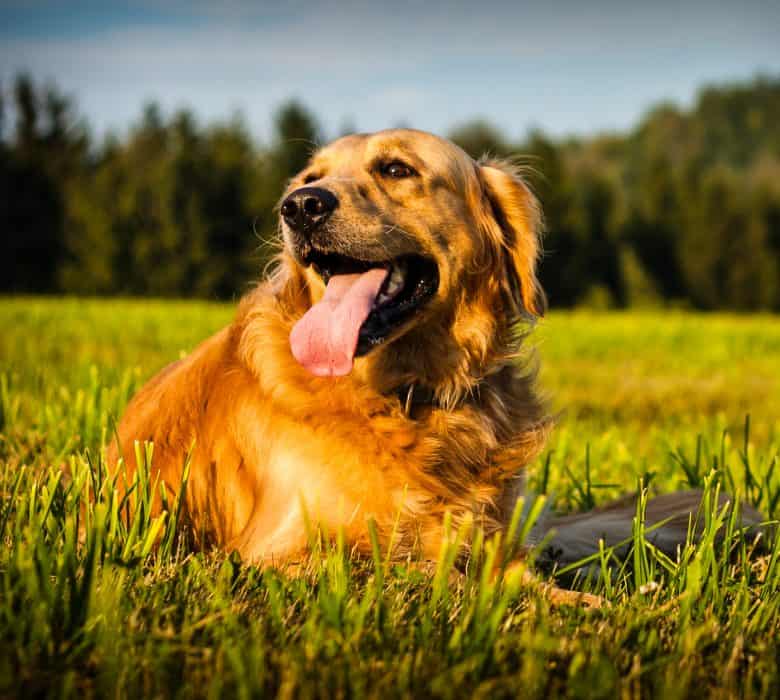 Males are about 24 inches at the shoulder, while females are a bit smaller at 22 inches. Males are proportionally heavier than females, weighing about 65-75 pounds.

Females weigh 55-65 pounds. They have soft, drop ears, dark eyes, and a well-balanced body with a deep chest.

Goldens are trustworthy, smart, friendly, and eager-to-please their people. That’s why they regularly appear on the top of popularity lists.

Pitbull terriers, technically known as American Staffordshire Terriers according to the AKC, is a smaller dog than the golden. They reach 18-19 inches at the shoulder for males and 17-18 inches for females.

These dogs were bred in England out of bulldogs in Great Britain in the 18th and 19th centuries. They were popularized in the U.S. in the early 1900s.

Pitbulls have short hair that comes in a variety of colors, including black, blue, fawn, bronze, liver, red, seal, white, brindle or a mix of these colors.

They have naturally floppy ears, though many breeders crop them in the U.S. They have a characteristically wide head and mouth

The puppies from these two dogs can have a range of these characteristics. While both parents are recognized by AKC, the Golden Retriever Pitbull mix isn’t.

It’s hard to nail down what this dog will look like, since they can vary. They can be any color that a Golden or Pitbull comes in, or any combination – including a mix of three colors!

You’ll most commonly see black, golden, brindle, yellow, brown, white, or a combination of these.

The coat can be long, medium or short, wavy, straight and can even have curls. It’s usually thin and fine, but not always.

Confused? It can help to head to Instagram and look for pictures of Golden Retriever Pitbull mixes to see what you could be in for if you decide to bring one home.

It can help to look at the parents of the puppy to get an idea about size and potential color, but even then, you can never be sure.

Get the know the personality of this friendly mix

Just as these dogs can vary in appearance, a Golden Retriever Pitbull mix can have a varied personality, as well. Still, you can make some generalizations about how they’ll likely behave.

In general, this is a loyal, devoted, and family friendly dog who is happy watching and playing with the kids. Of course, you’ll need to teach both the kids and the puppy how to play politely with each other.

Some are wary of strangers, but most are super friendly and social. Imagine how a Golden approaches the world ready to meet and mingle.

Almost universally, this is a dog that doesn’t like to be left alone. They like to be part of the group – after all, both of their parents were bred to work alongside humans, and that’s where they want to be.

This means that they can develop separation anxiety if they aren’t trained right from the get-go. This can lead to digging, chewing, barking.

You’ll want to practice teaching these dogs to be okay with it when you leave the house.

The best way to do this is to leave calmly and give them a treat before you head out. This teaches them that leaving is a good thing. When you return, act calm and like it is no big deal, but don’t give them a treat this time.

Over time, they’ll learn that your leaving is nothing to worry about and that you’ll always come back.

On the bright side, these dogs are quick learners because they’re smart and eager to please. They want to make you happy, and that means learning whatever it is you want to teach them – even if you don’t mean to! Be careful not to establish bad habits like begging unintentionally.

Golden Retriever Pitbull mix have high energy and love to go hiking, walking, running, and swimming. Don’t bring one of these pups into your life if you’re a couch potato. You’ll both be miserable.

This video shows a 5 month old having some playtime with their human.

While they love their people, they can be independent. They may decide to ignore you and do what they want – so long as they can keep an eye on you.

They also don’t tolerate boredom. You need to keep them mentally stimulated, or watch out!

As you’d expect from any dog with some Pitbull in them, these pups make good watchdogs. They are aware of their surroundings at all times and will keep an eye out for intruders.

That said, their personalities can be unpredictable and may have aggression issues. Especially if you get one from an irresponsible breeder who is just looking to make a buck.

They have a high prey drive, so be careful if you plan to have them around cats, gerbils, or birds. That said, they do make good hunters and the squirrels in your neighborhood will need to keep an eye out.

How to care for your Golden retriever pitbull mix

Grooming will largely depend on the type of coat that your dog inherits. Long haired and double-coated dogs require more grooming than short or medium, or single coated dogs.

The first should be brushed daily, while you can wait every 3-4 days for shorter or medium, or single-coated dogs.

Golden Retriever Pitbull mixes are clean dogs and they don’t need frequent baths – once every 2 months should be fine. That is, unless they get dirty. Then it’s the dreaded bathtime.

Use a dog-specific shampoo to prevent irritating their skin.

Trim their nails every few weeks using a clipper or grinder. Be careful not to cut the quick. If you can hear your dog’s nails clattering on your wood floors, it’s time for a trim.

Brush their teeth every few days using a doggie-specific toothpaste and either a piece of gauze wrapped around your finger or a dog toothbrush.

Clean their ears whenever you bathe them using an ear cleaning solution. In between cleanings, be sure to check your dog’s ears for any redness or unusual smells.

This is especially true if your dog has Golden-like drop ears.

TGolden Retriever Pitbull mixes need about 1,600 calories a day divided between two meals. Look for a high-quality kibble with meat as the first ingredient.

The trick with making sure your dog has all the best traits and not the bad ones is training. This includes early socialization when your pup is young.

Introduce them to lots of different situations, people, places and noises when they’re young. Just keep it all positive.

This means introducing them to new people and animals, and giving them treats or praise when they behave well.

Repeat this with different noises, smells, and situations, like walking over a metal grate or being around an umbrella opening.

You need to teach them to respect your space, your furniture, and your authority. Praise them when they behave well.

You should also teach them to accept it when you leave to avoid separation anxiety, as we discussed above.

Positive reinforcement starting right when they come to your home for the first time is key.

Finally, to keep them happy, they need an hour of exercise a day. This can include playing fetch, running, hiking, swimming, or anything else that they like to do.

You can also mix in some mental stimulation in the form of puzzle games or treat toys like Kong stuffing treats.

Because this uncommon breed hasn’t been overbred, they are relatively healthy. They have a lifespan of 10 to 15 years.

That doesn’t mean they’re free of any problems, however. Watch out for:

Want one? Here’s how to get a pitbull golden mix

If you decide to bring a puppy home, expect to pay up to $2,500. Be sure to ask for any health certifications and registrations for the parents. You should also ask to visit the parents to check them out.

You can always search for dogs near you, or travel to a breeder to pick up your dog.

Be sure to do your research before buying a puppy – watch out for breeders who won’t let you meet the parents or who seem more concerned about getting paid than the health of their puppies.

Because this is a relatively rare breed, it can be challenging to find pups to rescue, but it’s not impossible. First, check local rescues like the Humane Society.

You can also call pitbull rescues or golden retriever rescues to see if they have any mixes needing a home.

Last Chance Animal Rescue may have golden retriever pitbull mixes. You can also keep an eye out on Craigslist or Facebook.

There are no breed-specific rescues because they are so uncommon.

Are there any other similar mixes out there?

If you are wanting to find something a little different, there are several mixes out there that incorporate either the golden retriever, the pitbull, or both, combined with another dog. These include:

Ready to add one to your life?

These dogs aren’t for everyone, but in the right home, they can be an incredible companion that will always be loyally at your side.

Whether they’re long haired, short haired, black, white, more boisterous like a golden, or a bit more wary like a pitbull, life with these dogs is always an adventure.