Home » Breeds » Are There Different Types of Pomeranians, and Which One Should I Get?

Pomeranians are very distinctive dogs. One of the ancient dog breeds, the highly adaptable Pomeranian, belongs to the Spitz breed of dogs.

They are characterized by their pointed ears, fluffy coats, and voluminous tails that curl over their backs. 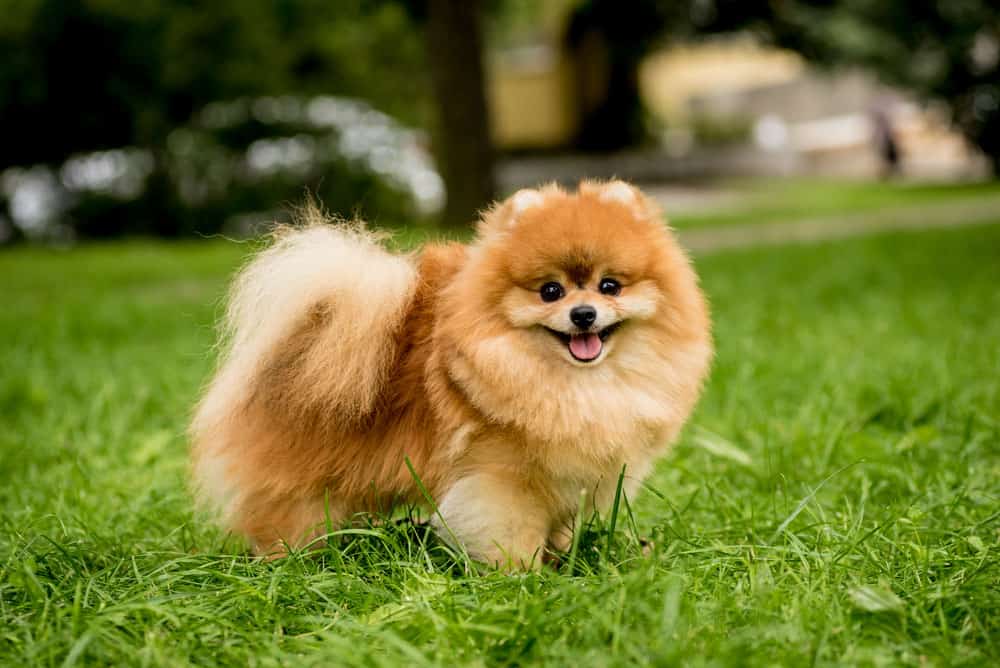 While the American Kennel Club recognizes only one official type of Pomeranian, there are various unofficial sub-types of this breed, resulting in dogs of different sizes with varying facial characteristics.

These dogs have also been bred with other breeds to create an adorable variety of Pomeranian mixes.

If you are thinking about getting a Pomeranian or even a Pom-mix for your home, you have come to the right place.

In this article, we will unpack the different types of Pomeranian and Pom crossbreeds, looking at some of the pros and cons of each one to determine which is the perfect dog for you.

How Many Types of Pomeranian are There?

However, in the 80s, the Pomeranian breed was categorized into three different types. These three sizes were referred to as Klein, Mittle, and Pomeranian in German.

Are there different sizes of Pomeranians?

Pomeranians are known as a toy breed of dog with three different sizes. These include the Miniature, Standard, and the Throwback Pomeranian.

It must, however, be noted that only the Standard Pomeranian is officially recognized by the American Kennel Club (AKC).

What are the Different Types of Pomeranians Based on Size and Weight?

There are three different Pomeranians organized according to their size and weight.

Miniature Pomeranians are also known as Pocket, Micro, Tea Cup, and Toy Pomeranians. As the name suggests, these dogs are smaller than the Standard Pomeranian.

While very popular, Miniature Pomeranians can have numerous health issues, so you must look for a reputable breeder if you plan to get one of these dogs.

Only the Standard Pomeranian is recognized by the American Kennel Club (AKC) and most other major kennel clubs.

Quick Comparison Between the 3 Variations of Pomeranian

Need to quickly compare the three different types of Pomeranians? This handy table will help you see the variations in the three unofficial sizes of the Pomeranian breed.

What are the Different Types of Pomeranians Based on Facial Features and Appearance?

There are three types of facial variations for the Pomeranian that are widely accepted, although these are not explicitly written out in the breed standards.

The Fox Face, Baby Doll, and Teddy Bear Pomeranian are these three variations.

According to the breed standard, the Fox Face Pomeranian is what a Pomeranian should look like.

They have long, pointed snouts and short, upright, pointed ears, giving them a fox-like appearance, although they do not have the characteristic small eyes of a fox.

These dogs have the large, round, expressive eyes that the Pomeranian breed is known for.

Although the Teddy Bear Pomeranian may not meet the strict breed standards for the Pomeranian, this is one of the most popular types of Poms.

As the name suggests, this dog’s face should look like a teddy bear, broader and fuller than the Fox Face Pomeranian.

They also have a shorter face and muzzle than the Baby Doll Pomeranian and the Fox Face Pomeranian.

The Baby Doll Pomeranian has also gained in popularity in recent years. These dogs have round faces like a doll with very expressive eyes and a short muzzle. Their noses, mouths, and eyes look like baby dolls.

As with the Teddy Bear Pomeranian, these dogs may not pass the strict breed standards and thus may not be eligible for show.

What is the Rarest Pomeranian?

While the Miniature Pomeranian is quite sought after, it can be challenging to find one of these tiny dogs due to the difficulty of breeding them.

As the AKC does not officially recognize the Baby Doll and Teddy Bear Pomeranians, it can also be challenging to find a reputable breeder selling one of these dogs.

What are Some Additional Pomeranian Crossbreeds?

Designer crossbreeds are all the rage in the doggy world, and these crossbreeds can have fewer health problems than their purebred counterparts due to hybrid vigor. Here are some of the most popular Pomeranian mixes.

The Pomchi is a Pomeranian Chihuahua cross. These adorable tiny dogs have the loyalty of the Chihuahua breed with the loveable friendliness of the Pomeranian.

The Poodle is a trendy dog for creating hybrids. The Pomapoo is a highly intelligent dog that makes a great apartment dog and is unlikely to bark as much as the purebred Pomeranian.

They can also be hypoallergenic, with the Pomapoo’s coat ranging from wavy to tightly curled depending on their genetics and how much of the Poodle gene they possess.

The Bichonaranian designer dog is a mix between a Bichon Frise and a Pomeranian. These adorable dogs have dense, fluffy coats and high energy levels. They will require plenty of exercise and attention.

What are the Different Pomeranian Colors?

Also read: What does a White Pomeranian look like?

What is the rarest color of Pomeranian?

The rarest color Pomeranian is, without a doubt, the Black Pomeranian. For Pomeranian puppies to be born with black coats, both parent dogs must carry the gene for the black coat.

Due to their rarity, black Pomeranian puppies are incredibly expensive. They usually fetch between $800 and $2000 a puppy.

No, the different kinds of purebred Pomeranians should not have different temperaments. Pomeranians were bred to be the companions of the upper-class elite and are well known for their charming personalities.

They are very loving and loyal dogs to their family members.

Because they are descendants of the wolfish spitz dogs of the Arctic, they do have quite a lot of willpower, agility, and determination.

These are very social dogs that love to be the center of attention. While they are friendly dogs, they do tend to bark at strangers, alerting the household to the presence of anyone new.

This dog is often referred to as the little dog who thinks he can.

Are Pomeranians easy to train?

Pomeranians are highly intelligent dogs and usually excel in obedience training, but they have a stubborn streak.

Although they are a playful breed, they also need socialization from an early age to get along with other dogs as they can be pretty territorial and protective of their owners.

They will also try to protect their Alpha dog status, which could lead to them becoming aggressive with other dogs if not properly socialized.

Which type of Pomeranian sheds the least?

Pomeranians have a dense double coat consisting of a thick fluffy undercoat and a longer overcoat. This coat is incredibly abundant on the chest and shoulders to form a thick ruff around the neck.

They also have a feathery fringe on their back legs. All purebred Pomeranians will have this coat that sheds, especially during the season’s changing.

Suppose you experience allergies to dog hair and are looking for a Pomeranian with a non-shedding coat. You could consider getting a Pomapoo which is a cross between a Pomeranian and Poodle.

Don’t miss out: Pomeranian Haircuts You Need to Show Your Groomer

Do different types of Pomeranians have different health issues?

Like any dogs, Pomeranians need regular vet visits. A few health issues are associated with the breed, which is usually due to overbreeding, particularly with the miniature varieties.

Are Pomeranians good for a first-timer owner?

Due to their friendly nature, small size, and high adaptability to living in various environments, the Pomeranian can be a good dog for a first-time owner.

You need to be sure that you are prepared to give this high-energy dog the exercise he needs and that you are okay with a dog that sheds and barks.

Which is the Best Breed of Pomeranian?

As you can see, the Standard Fox Face Pomeranian is the only type of Pomeranian officially recognized by kennel clubs. So if you plan to show or breed with your dog, then this is the type you need to get.

Due to this, this is also the most commonly found type of Pomeranian and the one most reputable breeders will offer you.

You can find some other reputable breeders selling Pomeranians of other sizes or face shapes, although these dogs won’t be able to be entered into dog shows and may even be crossbred.

If you don’t mix a Pomeranian mix, there are several super cute ones to choose from, including the Bichonaranian, Pomapoo, and Pomchi.

Do you have a Pomeranian or Pom-cross at home? We would love to hear all about your adorable furry friend in the comments below.