Home » Breeds » Pomeranian Haircuts You Need to Show Your Groomer

Pomeranians are possibly the only dog breed that can carry off so many different looks.

The Pom Pom has a thick double coat and a profuse overcoat made of guard hairs that give them their fluffy look, and incidentally, makes them the perfect specimen for many different grooming styles. 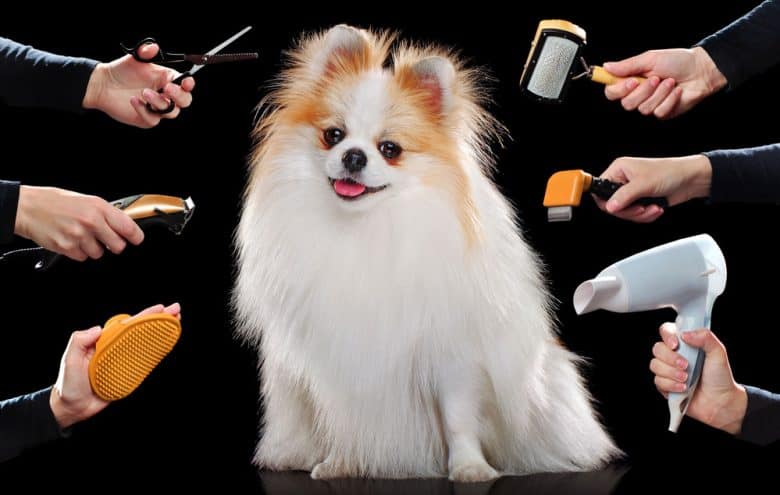 Furthermore, this little spitz’s fur grows quite fast, which means you can change up his look every so often.

The Top 10 Pomeranian Haircuts and Hairstyles

While some cuts accentuate the AKC’s breed standard, there are also some exotic doggie hairstyles that are more fun than practical.

Thanks to a meme featuring “Boo” the Pomeranian, Teddy Bear cuts have become incredibly popular.

Aside from that, there are also genders to consider. Females are generally shaved before whelping for hygienic reasons.

Some male dogs are given a male shave where their privates as well as their underbody is trimmed to prevent stains, especially if unneutered.

Show dogs are often sent to a professional groomer but some dog owners groom their own dogs. If you’d like to learn how to do dog haircuts in the comfort of your own home, check out this little tutorial:

We have ten cute Pomeranian haircut styles below for your reference, but Pomeranian owners will always find their fluffy small dogs adorable regardless of whether they have a cute cut or not.

Hairstyles are just a mode of maintenance, and it doesn’t hurt that it looks great on Poms!

Bear in mind that your Pomeranian puppy doesn’t require grooming until they are 12 – 15 months old.

Your cute puppies will naturally undergo a glow-up around 3 – 6 months where they shed their fluffiness and grow their adult coat.

It might look alarming to first-time owners, but don’t worry. Puppy uglies are completely normal. Some overs shave their Pom-Poms when they are going through this stage, but it’s completely fine to just let them be. 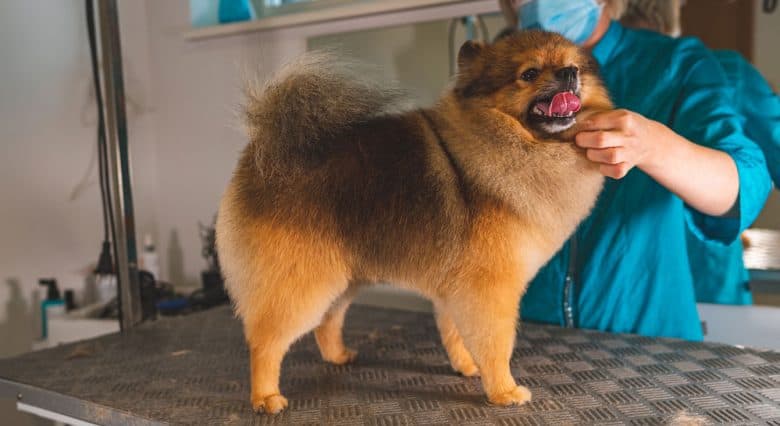 One of the most simple cuts that takes into account the dog’s natural lines. It’s basically getting rid of any stray hairs and shaping your Pom based on her coat shape.

You can do this dog grooming style at home because it doesn’t need to be perfect. Simply follow their outline and cut off any hairs that don’t fit into your pooch’s outline.

Made popular by Boo, a famous internet star, known for looking like a teddy bear. It is an adorable style that should only be attempted by a professional groomer.

It’s created by rounding the fur around the head and ears. Your Pom’s legs will be trimmed to look like a fat little log. You can choose how short you want it to be, for Boo, his cut is coupled with a short Puppy Cut.

Aside from being one of the cutest cuts, it’s already relatively low maintenance. It doesn’t require much brushing or detangling as compared to a Show Cut.

Also called Half and Half or Partly Shaved, this is a new favorite amongst Pomeranian lovers. This cut was adapted from cats.

The back half of your dog is cropped closely to the body, leaving a tuft of fur at the end of his tail. The ruff around his neck is trimmed for shape but otherwise left alone.

The Pomeranian Lion cut could be a fun style for male intact dogs, but it can also be prettied up for the ladies.

This is a very high maintenance hairstyle because you need to find a groomer who is experienced in grooming for shows. It is used to enhance the dog and hide faults.

For instance, they will focus on making the ears look tiny, the coat thicker, and the legs shorter.

Each Show Cut is customized to the dog. It might seem similar to the Traditional Cut but it is a careful affair which employs many tiny precise snips to make the dog look as close to the breed standard as possible.

What’s cuter than baby animals? Nothing. That’s why Puppy Cuts are so popular, regardless of breed. Long-haired Chihuahua, Poodle, and Yorkie haircuts all encompass the universal Puppy Cut.

It’s a stunningly popular option for Pomeranians despite its simplicity. It’s a one-length cut for lazy owners, leaving 1 – 2 inches of fur.

The head is not rounded and only slightly trimmed, following the outline of your pupper’s sweet face.

In between The Puppy Cut and a Traditional Cut. The Foxy Cut focuses on accentuating the Pom’s sharp features, making their ears seem larger than life.

Their coat is kept 1 – 2 inches shorter than its natural length to give it a tidy appearance, without anything too drastic. The tail is left in its full plumage.

If you want something that’s cute that’s not so common, the Lamb Cub is the one for you. It removes all the guard hairs from your dog so it has a wooly appearance.

This cut focuses on the bottom half of the dog, ensuring that their legs are log-like. The

A buzz cut for Poms that leave the heads and tails thinned out. It’s mostly used for infirm and older dogs that have trouble keeping themselves sanitary.

Some breeders, especially puppy mills will use this cut simply because there’s too many dogs to groom. 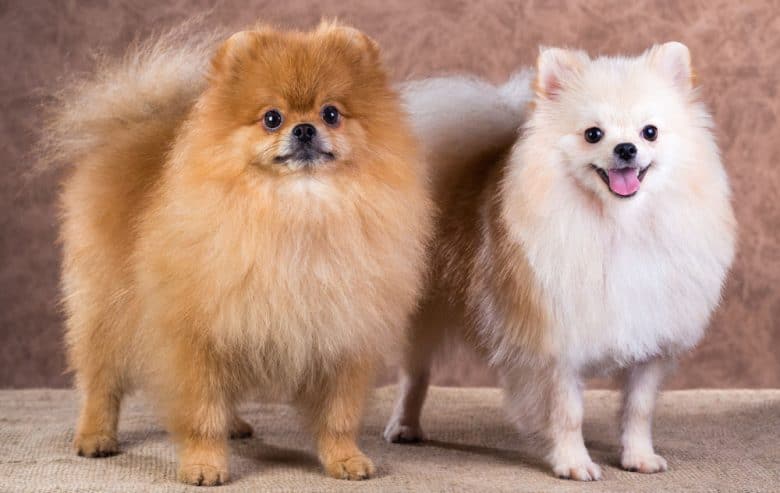 The Paw Cut is usually inclusive in all other cuts, but you can also request for a standalone Paw Cut.

It removes stray hairs from the paws and makes them look neat and tidy. Not only does it look appealing, but it’s also functionable!

Having fur on your little Pom is like wearing a pair of socks. Slippery on tiles and uncomfortable over grass!

Cute not your style? The Mohawk Cut is a fairly new and funky cut that best suits owners with personality.

Much as the name suggests, your Pom will be trimmed on both sides, leaving a tuft of long fur running from their neck to their tails.

The fur around their heads is lightly trimmed so it tapers naturally into the Mohawk. The feathering around the legs should also be slightly shortened for uniformity.

Before you take the plunge and drop your Pommie off at the dog groomer, make sure that you understand fully the possible consequences and know exactly what to expect.

Can Pomeranians have haircuts?

Yes, why not? It’s one way of dressing up your pups. Pomeranian grooming is one way to keep it maintained and looking crisp. Many dog breeds undergo grooming. 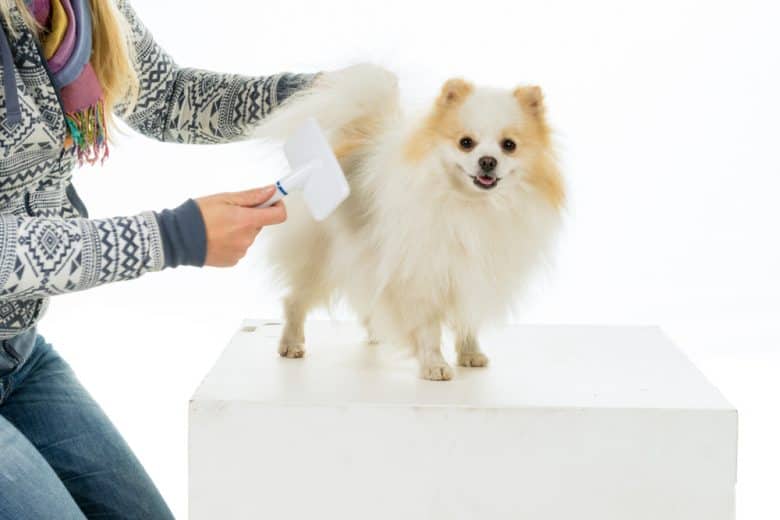 For the Golden Retrievers, they need to keep their feathers in check with regular trimming.

Schnauzers have special haircuts to give them the appearance of having long lashes or fluffy beards. It’s all part and parcel of owning a dog.

Is there a risk in cutting a Pomeranian’s hair?

Dogs aren’t usually bothered by haircuts like us humans might be, but there are certain haircuts that can affect the efficiency of their coats. The Pomeranian’s coat offers protection against the weather.

The outer layer of their coat actually serves as a protective guard against harmful UV rays and prevents snow from penetrating their coats.

But since we mostly keep our dogs indoors and can protect them from the elements with clothes and other modern inventions, it can be easily combated.

Is it bad to shave Pomeranians?

There’s no right or wrong if you’re making an informed choice. Some owners choose to shave their dogs due to personal reasons or special circumstances.

For instance, severe matting will require shaving to remove them from the coat.

Since mother dogs naturally shed their coats after whelping, it would make sense to shave them first. Or maybe the owners are unable to keep up with grooming.

Clipping is definitely a better alternative to having a matted coat.

However, shaving too close to the skin is often looked down upon by many because dog lovers think that the glamorous coat should be left to grow out – otherwise, what’s the point of owning a fluffball? 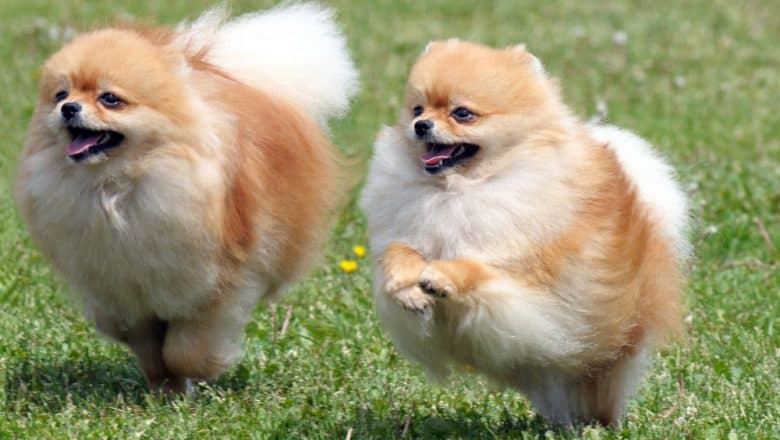 Prior to shaving your dog, please bear in mind that there’s a possibility that the fur might never grow back the way it used to be, especially in older dogs.

Also, it could leave your dog vulnerable to sunburn and other skin sensitivities.

Why is my Pomeranian losing her hair?

Poms are susceptible to alopecia. This can be inherited or triggered by clipping. It’s believed that shaving a Pomeranian too closely to its skin causes damage to the hair follicles, resulting in hair loss.

Sometimes their hair will grow back in a different texture and be fuzzy and wiry. Some doctors recommend melatonin treatment in severe cases.

The Pom’s coat is an enormous fluff ball and requires some skill. You should aim to comb them once every 2 – 3 days in order to minimize shedding or matts from forming.

While they do benefit from a thorough brushing with a bristle brush, you want to use a steel tooth comb in order to properly groom them.

A pro tip to use during the shedding season is brushing their hair against the grain with the hair dryer set on high.

This will help blow any loose fur out of their coats, so make sure you do this outdoors or in an area that’s easy to clean. Never attempt this on wet fur, you should only comb a Pom when its coat is dry.

If your Pom’s coat is damaged from shaving, you can stimulate hair growth by brushing them daily. This also keeps their follicles healthy.

You can also give them supplements that promote healthy skin and nails. It will take 3 – 4 months to see a significant improvement, and up to 18 months until your dog’s coat is as good as new.

Before launching into a full-scale grooming session, make sure that you acclimate your pup to being handled. Brush them regularly and teach them to hold still.

You can also turn on the hair dryer so the loud noise doesn’t bother them.

Some dogs absolutely hate being combed and it could be due to inexperience or a bad one. What you can do to overcome this problem is to get your furkid accustomed to the tools.

You can get a wide tooth steel comb off Amazon or from your local pet store. This is the only comb you’ll need for a Pom, but some people like pin brushes too.

Let them sniff the comb while you shower them in praise. Over time, they should be desensitized enough for you to attempt brushing. Always be gentle because if it hurts, they will remember!

How Can I Find the Best Pomeranian Groomer in My Area? 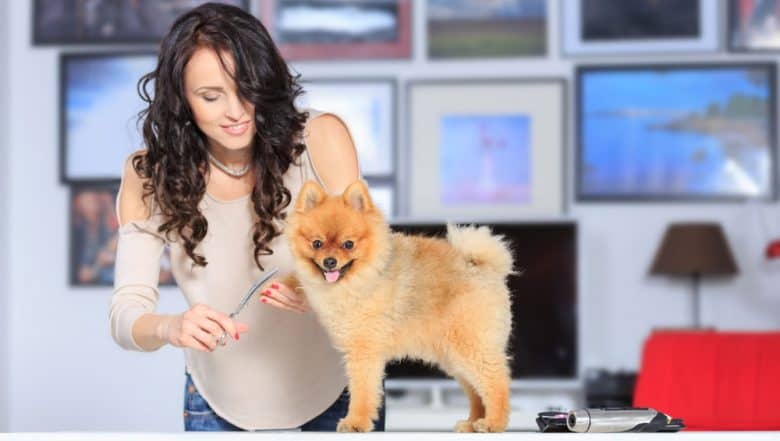 Look in the mirror! You’re the best groomer because your dog trusts you and is comfortable around you.

Grooming is also a great bonding time between dog and owner because you’ll be spending lots of time with her and getting the cut just right.

If you’d rather leave it in the hands of professionals, you can look up any nearby groomers and check out their online reviews before you drop off your furkid.

You can also talk to the groomers and see if you’re comfortable with them. It’s the same as finding a hairstylist for yourself.

The best haircut definitely depends on what kind of owner you are. If you own multiple dogs or hardly have time to groom your pets, you might want to go for a no-frills cut like the kennel cut or a puppy cut.

If you want to show your dogs, you definitely want to keep your dog’s coat long and lush. This means you have to stay away from those clippers!