Home » Breeds » Chihuahua Husky mix: Do they exist? Do you want one?

If you’re thinking, “how can this be?” – know that you’re not alone! A Chihuahua Husky mix, also known as Husky-Chi or Huskyhuahua, may seem impossible, but they’re real.

This adorable crossbreed is a perfect blend of two popular purebreds, the Chihuahua and Siberian Husky. They’re super intelligent, energetic, and would make a great addition to a loving family.

Origin: Can a Chihuahua breed with a Husky?

Yes, but not using the natural mating process. A Huskyhuahua is created through in-vitro fertilization (IVF) or artificial insemination (AI) where the Siberian Husky is the mom.

Because of their size, female Chihuahuas can’t carry the puppies of a male Husky. It wouldn’t do the dogs any good, and can even cause death.

Other than that, the history of this designer dog isn’t well-documented. What we can do is learn about its parents to give us and prospective owners an idea of what appearance and temperament the Huskychi can have.

Siberian Huskies are fluffy working dogs that belong to the Spitz family and originated from Siberia.

Not only are they known for playing an important role in the Chukchi tribe’s survival, but they’re also famous for their majestic appearance and blue eyes.

This resilient breed is bred as companion dogs and sled-racers. They were built for endurance and speed to transport goods and their humans across the ice.

Even with a busy body, Huskies are intelligent and playful canines.

Meet the sweet and sassy Chihuahua

Mexico’s national dog and the smallest breed in the world is considered ancient, most likely a descendant of the Techichi.

They’re the best example when you think of canines who have Small Dog or Napoleon Syndrome.

This purebred was first recognized in 1905 by the AKC and now belongs to the Toy Group.

They even earned the nickname “purse dog” because of how they can easily fit into designer bags, like in the movies Legally Blonde and Beverly Hills Chihuahua.

Not all Ch’s are the same, though. There are two types of Chihuahua – the Apple Head and the Deer Head.

Between the two, Apple Head Chihuahuas are the only variety accepted in dog shows. As you would’ve guessed, they have apple-shaped heads and a shorter muzzle.

What does a Chihuahua and Husky mix look like?

Chihuahua Husky mixes typically rock a balance of traits from both parents. They can have blue, brown, or multi-colored eyes like a Husky, and a dark nose and pointy ears.

This short video will give you an idea of what a Huskyhuahua looks like:

Size: How big will a Husky Chihuahua mix get?

With the huge gap between the size of the Chihuahua and the Siberian Husky, their hybrid offspring’s size will depend on which parent’s genes dominate.

They basically look like a miniature or teacup version of a Husky with short legs.

As a toy- to small-sized canine, this pooch will do fine in an apartment, but they’ll do best if they have a yard or enough space to run around on their own.

The Chi-Husky’s coat and color

Depending on whether the Chihuahua parent is long- or short-haired, then with the Siberian Husky’s fluffy double-cat, their mixed-breed offspring will likely have a smooth coat that’s short- to medium-length.

Chihuahuas also come in different colors. For the Huskyhuahua, they can have a white, black, gray, chocolate, tan, or fawn coat, while some can be bicolored or tricolored.

Some can also have that distinct Husky mask or markings.

Chi-Husky’s are sociable and affectionate doggos. They make excellent family pets, but only for experienced owners with older children.

This fido can find little ones too playful and exuberant, which can make them snap and bite. Besides, small dogs are more fragile.

With that said, anyone who wants to own this cutie should know how to deal with stubborn, feisty breeds because that also means aggressive tendencies.

There are actual studies about canine aggression mentioning Siberian Huskies and Chihuahuas that are directed to other dogs, their humans, and strangers.

That’s why it’s crucial for independent breeds like Huskyhuahuas to be socialized and trained as early as possible to ensure that they grow with a personality that’ll make them great pets.

For the good news, Chi-Huskies are incredibly intelligent, thanks to both parents. Huskies are also super smart and known to be escape artists.

If you don’t have a safely-fenced yard and you have this crossbreed already or you’re planning to get one, start setting it up.

“But aren’t bossy dogs difficult to train?” Not all the time. With a skilled-handler who knows how to use the Chihuahua Husky mix’s eagerness to please during training, there shouldn’t be an issue.

Add in a few treats and positive reinforcement, this pooch can catch on quickly.

Include obedience and crate training to mitigate bad habits. One obstacle you may encounter is potty training as Chihuahuas tend to have trouble with that.

Taking care of a Husky-Chihuahua cross after bringing it home

Prepare yourself if you long to have this mixed breed as your new family member. Raising them requires plenty of love, time, and patience.

It’s best to consider where you live, as well. Considering its parents, this hybrid will thrive in a place where it’s just cool or warm because they won’t be able to tolerate extreme weather.

What else should you be ready for?

Tips on grooming your Huskyhuahua

Chihuahua Husky mixes are not hypoallergenic, but they don’t shed as much as Huskies do. They’re considered low- to medium-shedders that require weekly brushing.

During shedding season, do it more frequently, at least 2 to 3 times a week.

But grooming will mostly depend on what type of coat your canine friend inherited.

Baths should only be given when necessary to avoid drying your pet’s hair and stripping it of its natural oils. We advise you not to wash your Chi-Husky during colder months if she has to go outside that day.

Keep her from getting cold by using a dryer, especially if your doggo has a longer fur.

You should also consider your Huskyhuahua’s weight, age, metabolism, and health when trying to figure out what and how much to feed her.

You can use this calorie calculator to compute your Chihuahua & Husky cross’ daily caloric requirements.

Since Huskies are susceptible to hip and joint issues, supplement your Chi-Husky’s diet with fish oil, chondroitin, and glucosamine.

How much exercise do they need?

This designer dog needs at least 30 minutes to an hour of exercise daily. You wouldn’t want to overexert your Huskyhuahua because she won’t have the same power or frame as the Siberian Husky.

Aside from that, its Chi parent is prone to brachycephaly, meaning they can suffer from breathing problems and respiratory illnesses due to their short muzzle.

There are a lot of activities that you can let your fur buddy enjoy, such as a trip to the doggy park, a walk around the neighborhood, or even playtime in the yard.

Just make sure this Husky mix doesn’t stay too long under the sun, especially during summer months.

If it’s way too warm out, keep your Chihuahua Husky mix mentally and physically engaged by giving her a Kong chew toy, hide and seek plushies, and puzzles.

Chihuahua Husky mix lifespan: Is this a healthy crossbreed?

Mixed breeds are generally healthier than their purebred parents because of hybrid vigor. The Siberian Husky & Chihuahua cross has a life expectancy of 12 to 16 years.

Still, it’s best to be aware of the health problems that they can inherit from Huskies and Chis. Some of those diseases are:

Breeders typically charge around $500 to over $1,000 for these puppies. Adoption fees can range from $50-$100. Breeders charge ten times that.

I haven’t found any reliable, licensed breeders, but consider seeking out shelter and adoption agencies for your pup!

This dog is a crossbreed of the Doberman Pinscher and Siberian Husky. They can weigh 40-90 pounds and stand at 22-26 inches in height. They are loyal and protective of their owners but also wary of strangers.

The downside of this pup is that it’s prone to separation anxiety because of its extreme neediness– they need to be where you are at all times.

This stunning pup is a cross between two breeds: the Great Dane and Siberian Husky. That said, this dog will be one giant pup (up to 130 pounds). An apartment– or even a small house– simply will not cut it for this guy.

They’re independent, stubborn, and not great with other pets. But they’re known for their loyalty to their owners and have a decent lifespan of up to 12 years.

The two breeds that make up this cross are similar in personality, so its offspring is a bit easier to predict. This will be a playful but protective and alert pup who may get into some mischief if left unsupervised.

They make great family dogs, as both breeds are good with children. Their life expectancy is about 9-15 years.

This fluff-ball can weigh 60-100 pounds and stand at 22-28 inches. They rock traits from both parents that make up its friendly, playful personality. Unlike the above breeds, they are good with strangers. 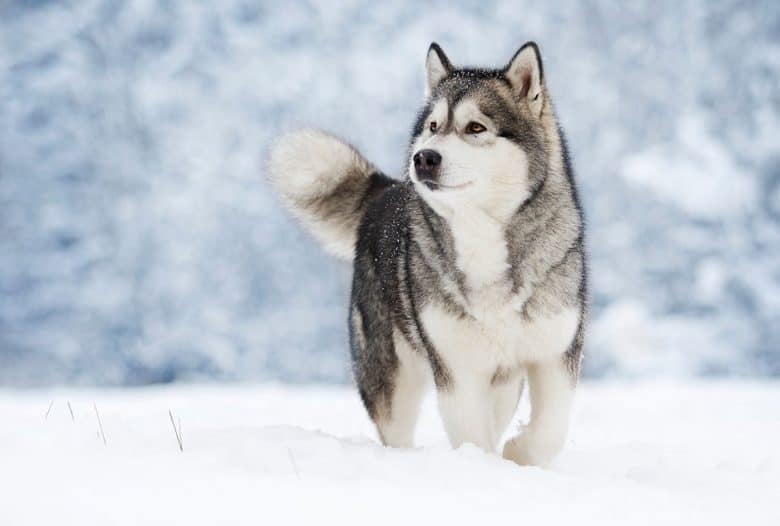 They’re also great with kids, loving, and extremely intelligent. On the downside, they need tons of exercise and grooming to keep them at their healthiest and happiest.

You need a pretty open schedule to have one of these guys.

A Sweet Surprise: what a breed!

If you love surprises, you probably won’t mind the unpredictable nature of the Chihuahua Husky mix.

With two extremely different breeds, it’s difficult to say how your Chi-Husky will look or act. One thing’s for sure: these pups are intelligent, loving, and sure to brighten your home with playful energy.

If you’re a first-time owner, the Chi-Husky isn’t for you. However, if you’re well-versed in strong-willed, sassy breeds, maybe it’s just what you need!