The following is meant to introduce the uninitiated to the Staffordshire Bull Terrier. It isn’t intended to be an in-depth dissertation on breeding or training. Anyone wishing to pursue either topic should refer to the books and magazines listed under References in this FAQ.

The Standard is the physical “blueprint” of the breed. It describes the physical appearance and other desired qualities of the breed otherwise known as a type. Some characteristics, such as size, coat quality, and movement, are based on the original (or current) function for the dog.

Other characteristics are more cosmetic such as eye color, but taken together they set this breed apart from all others. The Standard describes an ideal representative of the breed. No individual dog is perfect, but the Standard provides an ideal for the breeder to strive towards.

Although there has been some discussion through the years about the origin of the Staffordshire Bull Terrier, authorities generally agree that the breed can be traced back to the Mastiff-like dogs through the old Bulldog which, when crossed with British terriers, produced the first “Bull and Terriers.”

Books published in the early 1800s which refer to “Bull and Terriers,” “Pit Dogs,” and “Fighting Dogs” confirm that the cross existed at that time.

The old-fashioned Bulldog was a fierce, courageous animal used in the “sports” of bear and bull baiting as early as the mid-sixteenth century.

When these “sports” fell from public favor and were outlawed, their supporters turned to dog fighting and sought to create a sporting dog that, while retaining the legendary courage and ferocity of the Bulldog, would incorporate the greater agility of the terrier.

Terriers thought to have been used in the cross are the Manchester Terrier and the now-extinct English White Terrier. In addition, crosses with various of the old working terriers were made.

Because of the attention of different groups of English fanciers, two distinct types of Bull and Terriers arose and by 1900, they were easily distinguished.

James Hinks’ elegant white dogs, produced by crossing the old Pit Bull Terrier with the English White Terrier (and some say Pointer and Dalmatian), were recognized by the Kennel Club (England) and the American Kennel Club at the turn of the century.

This “White Cavalier” is known today as the Bull Terrier. The other Bull and Terrier – the Stafford, which was owned by the common man – was not as easily “legitimized.”

Fanciers of the “working class dog” met in England in 1935 to form a club for Staffordshire Bull Terrier fanciers and draw up a Breed Standard. In 1938, the first Championship Points were awarded in Birmingham.

The first SBT to be registered in the American Kennel Club Stud Book was the dog, an English Import, Champion Tinkinswood Imperial; the first American Champion was a bitch – the Australian import Northwark Becky Sharpe.

Although individual differences in personality exist, there are some things that you can expect to find in the personality of every Stafford. They are tough, courageous, tenacious, stubborn, curious, people-loving and comfort-loving, protective, intelligent, active, quick and agile.

They are extremely “oral” youngsters and need a safe alternative to furniture, toys, and clothing for their busy jaws. Staffords love to play tug-of-war and to roughhouse, but YOU must set the rules and YOU must be the boss. This is not a difficult task if you begin working with your Stafford when she is a puppy.

Most Staffords, particularly bitches, make excellent watchdogs. Their alert, musclebound appearance is so striking that it’s easy to forget that they are smaller than most American Pit Bull Terriers.

As Steve Eltinge in the book, The Staffordshire Bull Terrier in America says, “When a Stafford shows its teeth in a snarl, it can be frightening.” They look tough and can be a positive deterrent to thieves, but because of their natural fondness for people, most Staffords are temperamentally ill-suited for guard or attack-dog training.”

As with other members of the Bull and Terrier family, they can be the biggest people lovers in the world!

A Staffordshire Bull Terrier desires, more than anything else, to be with her people. Most adore a car ride, going on hikes and walks, enjoying a romp up the beach, and cozying up (or on) to you when you settle down for an evening of TV or reading.

Whatever the activity, “from the time it awakens in the morning until the quiet of the night, a Stafford lives life to the fullest.” (The Staffordshire Bull Terrier, by Steve Eltinge) 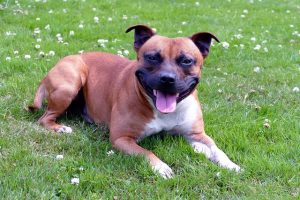 Staffordshire Bull Terriers are a “natural” dog and generally robust. The short coat of this breed requires little grooming other than an occasional brushing and a bath.

The downside of this drip dry coat is that Staffords are susceptible to fleas and ticks.

The general remedies to discourage fleas and ticks are recommended, as well as a thorough going-over with a flea comb during the worse months of summer.

Staffords covet human attention to the extent that I have seen several of them gather around their “person”, waiting to be combed from head to tail for fleas!

The Stafford is not a dog that tolerates weather extremes easily. Because of its short coat, it prefers plenty of shade and water on sweltering summer days (a child’s wading pool has been a popular choice in the past; supervised of course).

Its Bulldog ancestry and brachycephalic (short-headed or broad-headed) respiratory system can contribute to overheating.

Watch carefully to be sure that your Stafford doesn’t become overheated during intense play in the summer; if she appears to be wheezing or gasping for air, find the nearest source of cold water and soak her to lower her body temperature.

Staffordshire Bull Terriers can boast a number of obedience degrees and are “quick studies,” provided the trainer utilizes a positive, creative approach. Staffords are smart with a capital S. Young puppies enrolled in Kindergarten Puppy Training classes can begin to learn good habits and mix with other puppies.

In addition to AKC obedience competition, Staffords have been successful Therapy Dogs, participated in Agility Competitions and even “gone to ground” with other terriers!

Staffords are exuberant, impulsive, sometimes bull-headed … and surprisingly sensitive. A trainer must learn to be persistent, patient, and firm. Rome wasn’t built in a day and a great deal of ground may be lost in trying to adhere to the sort of inflexible techniques and rigid timeframe advocated by some training books.

Excellent training suggestions are provided in some of the resource books listed in this FAQ, and in the Staffordshire Bull Terrier Club, Inc.’s magazine, Staff Status, which includes a regular training column in each issue.

Basic obedience training (at the very least) is a must for any Bull and Terrier. It helps to maintain control in unexpected situations. Because of their impulsive natures, the other cardinal rule of Bull and Terrier ownership is “always think ahead.” An ounce of prevention is worth a pound of cure!

Although relatively problem-free, Staffordshire Bull Terriers sometimes exhibit hereditary problems and susceptibilities that can range in degree of seriousness from mild to life-threatening:

Any brachycephalic (short- or broad-headed breed such as the Bulldog) may be prone to breathing problems because of foreshortening of the nasal passage. Cleft palate is sometimes found in puppies and such puppies are usually humanely destroyed; they cannot draw milk properly and if not abandoned by their dam, may starve.

Some dogs are born with an elongated soft palate. If not extreme, it may not be noticeable or bothersome to the dog. However, extreme cases identifiable by respiratory distress and infection, stentorian breathing and difficulty in eating can be corrected surgically.

This surgical procedure renders a dog ineligible to be shown in AKC-sanctioned conformation classes.

Congenital epilepsy occurs at 3 to 5 years and can result from trauma. Although little understood, once diagnosed, it can be controlled with medication.

Although cataracts are considered an affliction of older dogs, some Stafford pups develop them. The condition should be diagnosed by an eye specialist.

Some eight or nine varieties of dogs come within the general classification of Bull Breeds. Although all lay claims to the Bulldog as a common ancestor, there are physical differences that make each distinct from the other:

How are Staffordshire Bull Terriers with children?

In England, the Stafford is known by the affectionate nickname, “The Children’s Nursemaid” or “The Nanny Dog.” Their tolerance of, and affection for, children are well known. That doesn’t mean, however, that it’s a wise idea of put the puppy and child together without supervision.

Children should learn to respect the dog and neither should indulge in play that is too rough. Some Staffords – even the males – have a “mothering instinct” and will stick right by the little ones, whether they are puppies or kids.

A Stafford, “tough” and not as quick to react to pain or discomfort, is likely to make allowance for the attention of toddler, finding refuge only when things become too overwhelming.

Can I keep a Staffordshire Bull Terrier in an Apartment? How much exercise will she require? 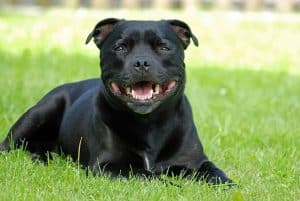 Staffords can make a home with you anywhere; they are happy as long as they are with you. They are an athletic dog, however, and need more exercise than most dogs. Bursting with energy, they need vigorous exercise every day!

A long, brisk walk on a leash (or harness – a useful alternative for some) will give you both a workout. Staffords love the heady freedom of being allowed offlead for a run, hike or romp and it’s delightful to watch them. Of course, it’s a good idea to make sure that they’ll come back when you call them, first.

Are Staffords a noisy breed?

Staffords, in general, are not noisy dogs. They may bark or “talk” while playing, or to alert you of a visitor. However, they are “quick studies” and if you have another dog in residence and THAT dog is a barker, your Stafford will probably pick it up.

Can I keep a Staffordshire Bull Terrier with another dog or with a cat?

Staffords, like members of any other breed, are individuals. While some may live peacefully with other animals, some will not. Puppies brought up with cats and other dogs generally do well.

If bringing an older Staffordshire Bull Terrier into your home, first introduce the dogs away from the house in a neutral area. It should be easier to bring a Stafford into your home than bringing a strange dog into the home of a Stafford. Encounters should be supervised and the dogs observed to determine how a heirarchy develops.

Should I consider a male or a female?

Both will offer much love and affection. Females tend to be better watchdogs; males tend to be larger. No matter which sex you select, spay or neuter if you have decided not to breed or exhibit your Stafford.

What sorts of toys are safe to give my Stafford?

There are no such things as “indestructible dog toys” for Bull and Terrier breeds. But some have tried these: Bowling balls or big Nylabones. Anything else might be chewed up, swallowed or destroyed in short order.