Home » Breeds » 4 Types of Pitbulls and What Makes Them Different

Known for their aggression, the Pitbull received a bad reputation from their dogfighting and bull-baiting days. Although this label isn’t correct, the confusion doesn’t end there.

There’s a lot of confusion surrounding Pit Bulls and their designation as a breed. The disillusion is so prevalent that it’s common for veterinarians to mislabel them. Pitbull isn’t a breed; it’s a catch-all name for four separate breeds, which we will introduce in-depth below.

What are the Different Types of Pitbull Dog Breeds?

Under the American Pitbull Terrier, there are 2 subtypes: the Rednose and Bluenose Pitbull.

Terriers are feisty and intelligent, whereas Bulldogs have raw brute strength. It’s common for breeders to mix these two because together, they produce a crossbreed build for bloodsport.

The Pitbulls muscular build made them popular contenders for bear-baiting in England. Since dog sports were banned in the 19th century, these breeds are primarily companions.

Pitbulls still carry the negative reputation of the fighter, which can be frustrating for some dog owners.

Large and aggressive dogs like the Husky, Mastiff, Boxer, Great Dane, and Rottweiler all have similar jaws and temperaments but avoid breed-specific legislation (BSL).

What makes BSL difficult for the Pitbull is its contention as a breed.

Pitbulls are not a breed within itself, but similar-looking breeds are grouped together, with many dog lovers interchanging their names.

However, when someone is talking about a Pitbull, they are usually referring to the American Pitbull Terrier.

If you want to DNA test your own Pitbull to see which one you have, you can pick up a DNA testing kit off Amazon.

The American Pitbull Terrier is the second most common of the Pitbull terriers. They are devoted to their family and make excellent guard dogs for children.

APBTs are intelligent, learn commands quickly, and have a particular love and zest for life.

With proper socialization, Pitbull puppies will grow up to become incredible family pets due to their athleticism, skill, and obedience.

Even if you don’t want a companion, their astounding physical characteristics, like their muscular form, make them exceptional workers.

After arriving in America with many English immigrants, they continued their work as hunters and herders on farms.

After completing a hard day’s work, they would relax with their companions in their masters’ home.

American Pitbull Terriers have long legs, which gives off a lean appearance. Their coat colors range from brown, white, black brindle, and a mix of all the above.

APBTs typically live long, healthy lives without many health conditions until much later in life.

The Rednose Pitbull is a variation on the American Pitbull. They have the red nose that’s in their namesake.

Their coat colors match their nose, as they commonly come in a red, brown, chestnut of fawn but copper and earthy brown are also typical.

Due to their rare coat color, Rednose Pitbulls come with additional health issues linked to their recessive genes.

Breeders will pair two Rednose Pitbulls together because their rarity pulls a higher profit, which has led to unethical practices.

Besides that, they are just as loyal, trainable, and gentle as a regular American Pitbull Terrier. Even though their coats are the color associated with anger, they aren’t more likely to be more aggressive than other Pitbulls.

The Bluenose Pitbull is another variation of the American Pitbull with a blue nose, lips, toenails, and eyes.

They are easy to identify because their noses will have a blue tint in the puppy stage, and their eyes will stay lighter than brown until adulthood.

Although many of the Bluenose Pitbulls’ features are blue, their coat is typically grey.

This blue and grey mutation results from low melanin levels in their pigment, which can create additional health problems like cancers, eye conditions, and heart disease.

Similar to the Rednose Pitbull, their coat color doesn’t make them more aggressive.

It’s possible to breed the Rednose and Bluenose Pitbull together, but it’s irresponsible to do so because their puppies will likely have crippling health concerns throughout their lives. 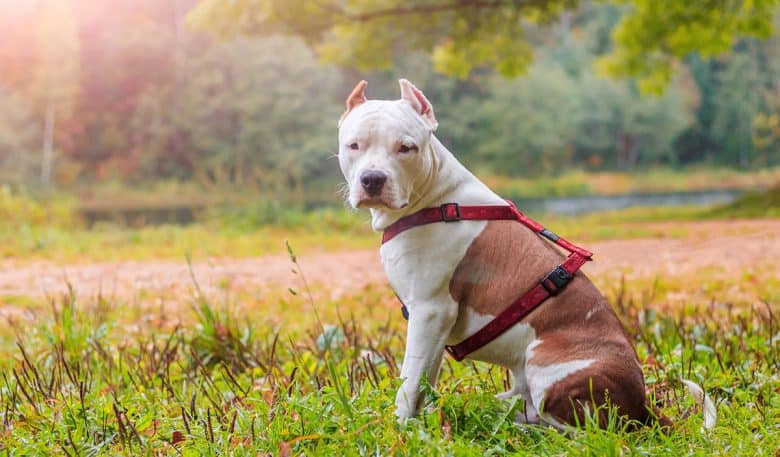 The American Staffordshire Terrier or AmStaff looks similar to the American Pitbull Terrier.

Both breeds are mistaken for one another frequently, but the most significant difference between the two is that the American Pitbull Terrier doesn’t have recognition from the AKC.

Working dogs with a heart of gold, the confident, smart, and good-natured Staffies rank 85th AKCs popular breeds list, but this is likely higher.

Due to breed-specific legislation, it’s likely that owners aren’t registering their pups because AmStaffs are illegal in their country.

Popular in the United States as a sidekick for Presidents, the AmStaff has a long bloodline of combat dogs and was the avatar for American culture throughout the World Wars.

Although they were useful in wars, their bad reputation comes from their pit fighting days.

Although this purebred can become aggressive like any dog, they’re sweet nature, and their love for children often reigns supreme.

The British Staffordshire Bull Terrier is a medium-sized, short-haired terrier with the same rough past as the other Pitties: bred for dog fighting and sport.

Through responsible breeding, they are now the most popular dog in Great Britain.

These dogs are no Chihuahua – they are a quiet and thoughtful pup through and through.

Described by the UKC as brave, tenacious, and clever, these pups will run circles around you to ward off their endless supply of energy.

To see the cute Staffordshire in action, watch the video below:

Staffordshire Bull Terriers has a large terrier head attached to a small body. They come

In every coat color, you can think of, even the rare blue and red. As a disclaimer, they have the terrier stubbornness and are just as difficult to train as the others.

The Staffordshire Bull Terrier is the type of dog that prefers your lap rather than the couch and hardly has an aggressive bone in their body.

The Bull Terrier is the perfect dog for small apartments or homes with little space as long as you take them to the dog park often.

The American Bully looks similar to an English Bulldog due to their stocky, short, and wide appearance.

They are descendants of the American Pitbull Terrier but bred down smaller and smaller to appear like a bulldog-type, which gave them the bully breed association.

Due to their classification as a mixed-breed dog, they can receive recognition from the AKC. The American Bully is an adaptable, trainable breed and a loving companion.

Despite being lapdogs at home, they do well in dog sports like the flirt pole and weight pull.

The Classic has a similar height and weight to the Standards but is less muscular. XXL and Micro Bullies don’t exist, so watch out for breeders who try and sell these dogs.

Despite their designer breed status, they usually sell for 20,000+ dollars or more.

If the AKC gave this breed recognition, they might have a spot as high as the German Shepherd based on how die-hard their dog owners are.

Below is a chart for a quick comparison between the four variations:

Other Types of Pitbulls

There are other Pitbulls that didn’t make it on the list because they aren’t as common. The following list of dogs are all recognizable under the Pittie umbrella:

The Multiple Types of Pitbull Colors

The most common coat colors are black, brindle, brown, chocolate, fawn, and white, but a Pitbull can exhibit any possible dog coat color.

Pitbulls usually have two or more colors throughout their coat, with the most common combination being black, brown, and white.

Although red and blue Pitbulls are rare, the rarest color is Merle, which is a mutation that creates grey, black, white, and tan spots. Pitties that have this coat color will have Husky blue eyes.

Most dogs who sport this unique fur will usually become deaf at some point in their life.

Here are Some Popular Questions about Pitbulls and their Types

You likely have some burning questions about Pitbulls, and I don’t blame you. Their history has led many people to search Google for answers to the following questions.

Which is more aggressive, a male or female Pitbull? 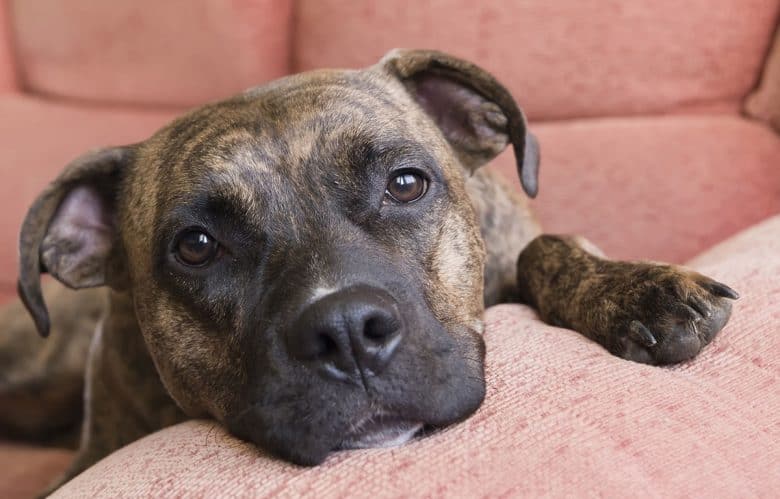 Both females and male Pitties are usually friendly with adults or children, but they can have a nasty dog bite if they aren’t properly socialized or trained.

On average, unneutered males are more aggressive towards other dogs, but neutering will usually fix this issue.

Which Pitbull breed is the most dangerous?

The American Temperament Test Society made a test with the purpose to determine which breed of dog was the most aggressive.

Although they did rank high in aggression, the ATTS performed multiple tests that studied how often a dog showed signs of panic, aggression, and shyness.

The AmStaff passed this test 85.2% of the time. The most aggressive dog on the list was the Chihuahua.

What type of ears do Pitbulls have?

Pitbulls’ ears typically stand up naturally without cropping, however, the size and firmness will vary with each dog. A Pitbull can have floppy ears that hang past their eye, but it depends on breeding.

Why do you crop Pitbull’s ears?

The reason most people cite for cropping their dogs’ ears includes a desirable appearance and risk of infection.

However, there is no evidence to suggest this. It’s actually more likely that undergoing surgery will increase the rate of infection.

Ear cropping happens to dogs that are less than a year old, which makes it a cruel and unnecessary practice.

Ear cropping surgery is illegal in Europe and many other countries, including the United States, even though the procedure is done regularly.

How do I know what kind of Pitbull I have?

You can also measure their height, the size of their head, coat marking, and overall build. When in doubt, take them to the vet.

Do different types of Pitbulls have different health issues?

Different Pitbull types will have their own set of health issues.

For example, because the American Bully is much smaller than the other Pitbulls on this list, they are more likely to suffer from Patellar Luxation (displaced kneecaps) than larger breeds.

As mentioned, coat colors can also affect the overall health of the breed. The Rednose and Bluenose Pitbull are more likely to develop health issues throughout their lifetime, especially if they are crossbred with each other.

As a positive, most of these health conditions will appear in your Pitbulls golden years, unless these problems were present as puppies due to poor breeding.

Unless you have an American Bully “Pitbull,” which has the lowest life expectancy of 8-13 years, you’ll probably have a good 12-16 years with your pup as long as you keep them healthy through exercise and a proper diet.

The following breeds are commonly misidentified as Pit Bull-type dogs.

All of these dog breeds look similar to the American Staffordshire and have the typical big dog reputation of appearing large and scary, but are actually big sweethearts.

Which Type of Pitbull is the Best for You?

The Pitbull is the best dog you can own because their kind, affectionate and charming personality are a great fit for any home.

While you should train and socialize all dogs to avoid aggression, it’s unlikely any of these breeds will attack humans.

They are similar in size, lifespan, and personality and do well in a fenced yard and active families.

The Staffordshire Bull Terrier and American Bully are perfect for apartments. If you want something more stocky, you can try for the Bully.

What do you think of the Pitbull? Which one is your favorite? Let us know below!