Home » Breeds » Bullypit: Is the American Bulldog Pitbull Mix Your Kind of Dog?

This crossbreed may look intimidating, but they will wow you, whether as a pet or while they’re performing as a guard dog or as a watchdog. 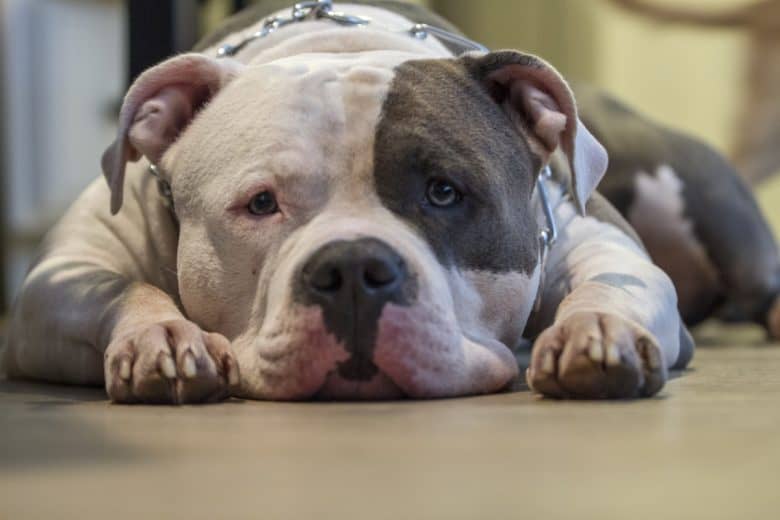 Want more info about the Bullypit?

Designer dogs have been around for a while, but some say that the American Bulldog Pitbull mix probably first came about in the last 30 years or so.

So, to help us understand a bit more about this mixed breed and know what to expect in terms of their appearance and personality, it’s necessary to take a closer look at each of the purebred parents.

Unfortunately, most bully breeds have a rough history, which is the same for the American Bulldog. These poor canines’ English ancestors were bred to bait bears and bulls until around 1835 when this horrific practice was outlawed.

However, they were still doomed as the ban just meant that the focus turned to breeding these dogs for dogfighting.

Due to being bred as fighting dogs, these dogs were encouraged to be aggressive, and their courageous nature made the Bulldog perfect for the job that those people wanted.

Later these dogs were brought to America by immigrants, and due to their loyal, tenacious nature, they were set to work guarding properties and hunting games on farms. In World War II, the American Bulldog breed almost went extinct.

Stocky and muscular, the American Bulldog has excellent athletic abilities and is known to jump six feet or more into the air. They typically stand 20 to 28 inches (50 to 70cm) tall and weigh between 60 and 120 pounds (27 to 54 kg).

There are multiple types of American Bulldog, including the Johnson type (also referred to as the Bully or Classic), which are large, bulky, and muscular with a broad chest.

There’s also the Scott type (also called the Standard or Performance), which has a longer, sleeker, more athletic build. You can also find hybrids of the two different types of American Bulldog.

Sadly, the American Pitbull Terrier has a very similar history to that of the American Bulldog. This breed was also used for bear and bull baiting and later for dogfighting.

Because of that, this purebred has gained a reputation for being dangerous, and it is illegal to own one in some places, not just in the U.S., but around the world.

The American Pitbull is often confused with the American Staffordshire Terrier. The American Kennel Club (AKC) gave the dog this name in the 1930s in an effort to try separating the breed from its pit-fighting past.

As a result, this Pittie is not recognized by the AKC as its own breed. However, most people agree that the two are different from the Staffordshire Terrier that is slightly smaller.

Their short, smooth coat varies in color but typically comes in two variants, namely the Blue Nose Pitbull and the Red Nose Pitbull.

As the name suggests, the blue-nosed variant has a grayish or charcoal-colored nose and coat, while the red-nosed Pitbull has a pink nose with copper-colored fur.

Although the Bully Pit does appear terrifying to some, its comical mouth with its smiley appearance can make it look like your dog is smiling at you.

The Bulldog Pitbull mix generally has a strong physique with a broad chest, robust back, large feet, and muscular legs.

They have a broad and flat head with a short muzzle, and floppy or rosebud ears. Their tails can either be long and narrow.

To give you a better idea of what an American Bulldog Pitbull mix would look like, watch this video:

How big will an American Bulldog Pitbull mix get?

Crossing an American Bulldog with an American Pitbull Terrier will result in a medium to a large-sized dog that stands at an average height of 20 to 24 inches (50 to 60 cm) and weighs between 40 and 80 pounds (18 and 36 kg).

Due to its large size, the PitbullBulldog is NOT well-suited for apartment life and would better suit life on a farm or, at the very least, a home with a large, fenced-in yard where the dog can roam around.

The coat of the American Bulldog Pitbull mix

Although the coat of the American Bulldog Pitbull mix is short, fine, and slick, this breed is not hypoallergenic and thus would not be well suited to people with allergies.

The type of Pitbull, be it a blue-nosed or red-nosed, will affect the look and color of a Bullypit pup.

Based on its parents, the American Bulldog Pitbull mix puppy can come in a variety of colors such as black, tan, red, yellow, grey, golden, cream, and white.

The American Bulldog Pitbull is an extremely protective dog but will exhibit a cheerful personality if socialized and trained when still a puppy.

Training a Bullypit puppy can start as early as eight weeks old. Doing so will make this fido develop good behavior.

Be prepared for tricky or challenging training sessions. Due to their dominant, impatient characteristics, they will require a firm hand and a committed owner.

It is ideal to have some experience when dealing with this breed because if this is your first time owning a dog, the Bullypit may notice it.

Don’t forget that positive reinforcement is vital when teaching any dog, whether it’s a purebred or a crossbreed.

American Bulldog Pitbull mixes can also be wary with strangers and other dogs. With that said, they may have a tendency towards aggression, particularly with smaller pets. The history of this canine’s parents may also play a role in this.

Like with every good watchdog, Bullypits like to bark and will fit the job. If taught and handled correctly, you can expect an extremely sweet fur buddy from this breed. They’re also highly intelligent dogs that love attention and having fun.

You can check out how smart an American Pitbull is in this video, where one is being trained to sit, leave, and fetch:

A few things to keep in mind when it comes to owning this breed – because of their thin coat, this crossbreed does not fare well in climates that are too warm or cold.

Their single layer of fur does not offer much protection and even means that the Bulldog Pitbull is susceptible to sunburn and needs to use sunscreen!

How much exercise does this fido need?

This hybrid is fairly active, and at least 90 minutes of exercise daily. Being on the move will help this doggo stay well-behaved and entertained.

That is why we recommend them to active families who enjoy spending time outdoors and taking their canine friend on runs, jogs, and hikes.

For mental stimulation, treasure hunts, or hide & seek of their favorite toy or treat is a great activity.

Only visit the doggy park if your Bullypit is trained and socialized. You have to be vigilant when you let your pooch play with other dogs, so don’t leave him unsupervised.

Bullypits should be fed at least 2 ½ to 4 cups of dog food each day, divided into three to four meals. It will help prevent gastric torsion, which is a common but severe condition in large breeds.

This crossbreed will benefit significantly from high-quality dry dog food with low-grain content as grain can cause allergies. It should also be high in meat and Omega 3 fatty acids to develop strong bones and sustain muscle mass.

A diet rich in chondroitin or glucosamine is a good choice to keep your pet’s bones healthy and avoid any potential joint disease.

If you have the time and budget to feed your canine pal raw food, that would be great, too! Just like Benzo with this hearty meal.

Just make sure that the food you provide your dog is based on his age, size, activity level, and health.

The grooming needs of the American Bulldog Pitbull mix are low to moderate. Brushing is only needed about twice a week – except in seasons of high shedding where daily brushing is required.

Give him a bath only when necessary, like when he gets dirty or stinky. Wiping the Bulldog Pitbull mix with a damp washcloth will be enough to clean him and remove any loose hairs.

Its teeth should be brushed two or three times a week, while nails should be clipped when they get too long or notice them clacking against the floor. Ears can also be checked and wiped clean weekly.

The hardy mixed breed of an American Bulldog and Pitbull results in a cross that can have a general lifespan of 10 to 13 years. Still, hybrids can inherit some of the health problems that their purebred parents are prone to.

The English counterpart of the American Bulldog is known for several illnesses such as hip dysplasia, which is common in short-legged dogs.

Focus on maintaining an exercise regime and supplemented diet that will help to prevent this in your Bullypit.

Due to their short nose, your puppy may also develop Brachycephaly Airway Obstructive Syndrome, which can cause serious respiratory complications.

The one-layer coat of the Pitbull parent also makes this breed susceptible to allergies.

Other common ailments that may affect the American Bulldog Pitbull mix are hypothyroidism, heart disease, eye problems, and reverse sneezing.

Where Can I Find Bullypit Puppies for Sale?

Thanks to technology, you can find available pups online! If you are thinking about getting an American Bulldog Pitbull mix puppy, you can expect them to cost between $250 and $2,000.

The price of a Bullypit will depend on factors like the breeder’s location, the popularity of the kennel, the bloodline of the parents, and the availability of the puppies.

You will also need to take into account the average annual expenses, and the usual medical bills. Annual medical costs can range from $485 to $600. Then other expenses will likely total between $510 and $650 each year.

When looking for your perfect Bullypit puppy, a lot of thought and care should go into trying to find a good breeder.

Irresponsible breeding of the American Pitbull and American Bulldog can result in an aggressive dog.

Try to avoid purchasing this hybrid from a pet store or places where you’re not sure that ethical breeding practices have been followed.

To start your search for an American Bulldog Pitbull mix puppy, look for breeders that specialize in Pitbull or Bulldog mixes, such as the Hustle Line Kennels in Memphis, TN.

You may also check social media accounts, like this Facebook page, where you may find American Bulldog Pitbull mix puppies for sale. There are also marketplaces that offer Pitbull mixes and American Bully mixes.

Due to the nature of this breed, you can often find the American Bulldog Pitbull mix at shelters that you can adopt or rehome.

Depending on its past, the rescue of this crossbreed may need a lot of time and dedication in terms of training, resocialization, and exercise. Some rescue organizations do train dogs that stay with them, so this is something you can ask the shelter.

Here are some places where you can start your search for a Bulldog Pitbull for adoption:

Bulldog Club of America has a rescue network where they provide a list of organizations and dogs that can be adopted per state.

Should You Get an American Bulldog Pitbull Mix?

This breed, while not the ideal pet for everyone, shows strict loyalty to its favorite people.

The protective, strong, and energetic nature of the Bullypit makes them best suited for active and experienced dog owners who are willing to invest the time training, exercising, and socializing their dog.

If you’re a novice owner, you may find this mixed breed to be overly stubborn, aggressive, and difficult to control.

What can you say about this designer dog? Do you have an American Bulldog Pitbull mix? Share your story with us by commenting below!