Home » Breeds » Is the Frug one the cutest dogs in the world?

You may also know this little pooch in a different name, such as French Bug, Fruggle, or Frenchie Pug.

Not to be mistaken by the famous pop dance in the 1960s, the Frug is an amazingly unique designer dog. Curious what this cute as a button mixed breed is like in terms of appearance and temperament? Then you’re in the right place.

As we mentioned earlier, the Frug is a hybrid deliberately created by crossing the French Bulldog and the Pug. Since small breeds are trendy, it’s no surprise that the two purebreds were mixed as part of the designer dog trend.

With crossbreeds growing extortionately in the last 20 to 30 years, the first French Bulldog Pug mix probably popped up in the United States somewhere in the last couple of decades. Since its creation, the Frug has become one of the most sought-after small dogs.

For us to get a clear understanding of how the Frug dog turned out, let’s learn a few things about its parent breeds.

The French Bulldog (AKA Frenchie)

The French Bulldog came about when Normany lace workers moved over to France from England, taking their smaller, undersized Bulldogs with them. Easy to transport and travel with, these middle-class workers kept the dogs not only for companionship but also to hunt rats in their factories.

Although Frenchies were easy to travel with, they were often considered to be the runts by Englishmen. The French, however, loved these tiny Bulldogs so much that they became extremely popular in the country.

Over time, the tiny French Bulldog grew to become a symbol of the elite. In fact, the wealthy loved them so much that one dog who sailed aboard the Titanic was even insured for a healthy sum of $750.

Built like a miniature tank, the French Bulldog is a small yet muscular dog that weighs between 24 and 33 pounds (11 to 15 kg). Their most notable characteristics include their upright bat-shaped ears and their short, shiny coat.

It is said that the adorable little Pug can be traced back to the Han dynasty of China between 200 B.C. and 200 A.D. Like the French Bulldog, the Pug was also prized among the elite, and even Asian royal families loved to keep them as companions.

Aside from being bred as the ultimate lap dog, the Pug was adored for its wrinkles by the Chinese as they looked like a good luck symbol.

These small dogs migrated from China to Europe via the Dutch trade routes, where they grew in popularity. Known as Mpos in Germany, Doguillo in Spain, Carlin in France, and Caganlino or Carlino in Italy, this breed has many names.

From Europe, they found their way to the United Kingdom, where the breed became more popular, and they were first called the Pug. The name is said to come from the Latin term for first because the Pug’s wrinkled face resembles a hand closed in a fist.

Pugs were then brought over to America after the Civil War and were soon recognized by the American Kennel Club (AKC) as part of their toy group.

These small dogs stand around 10 inches (25 cm) tall and weigh between 14 and 18 pounds (6 to 8 kg). Pugs are known for their deep wrinkles, as well as their humorous looking flat snouts, and dark puppy-dog eyes.

Its wrinkly face and curled tail characterize the French Bulldog Pug mix. They generally have a compact build with strong, straight legs. It also has a short muzzle and snout, making them a brachycephalic breed, which we’ll discuss further later.

Frugs are famous for their wrinkles and their big, brown eyes that are offset by straight, upright ears.

When it comes to their fur, they have a smooth, glossy coat that comes in brown, black, blue, tan, golden, cream, and brindle.

To get an idea what a Frug looks like, watch this video of a little girl getting her French Bulldog Pug mix puppy:

Size: How big does a French Bulldog Pug mix get?

The Frug breed is the perfect small breed for any house – even an apartment-style living. They adapt well to their surroundings and are happy being left alone for several hours, making them the perfect companions for city living. 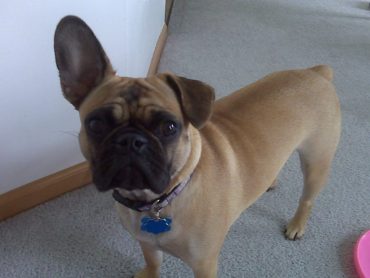 A French Bulldog Pug mix is an excellent choice for families. They crave attention and make for lovely pets that will follow you wherever you go. Their eager-to-please nature makes them natural charmers and excellent companions.

They are easygoing, curious, and playful, which means they tend to get along well with kids of all ages. Frugs also get along great with other pets.

Although small, the Frenchie Pug can be stubborn, which can make this breed challenging to train. Reward-based training with positive reinforcement techniques has shown to yield the most successful results with headstrong canines.

Since they love to please, Frugs will enjoy learning fun tricks and entertaining their owners. You can try and teach your fido many new skills, including how to walk backward.

That said, be careful when engaging in play with your French Pug. Small breeds, especially while they’re still pups, will require care while being handled. And even adult Frugs don’t take well to roughhousing as they are delicate and can get hurt easily.

Like their French Bulldog parents, the Frug is also intelligent and courageous. They can even be trained as a watchdog.

How to care for a French Pug

As previously mentioned, the French Bulldog Pug mix is highly adaptable and thrives well in most environments. However, they don’t do well in climates that are either very warm or very cold.

These are some important considerations to keep in mind when you feed, exercise, and groom your French Pug.

Frug dogs do have a tendency to overeat and, as a result, can gain too much weight and become obese, which can lead to a variety of health issues later on in life.

To avoid this, but still provide your Pug French Bulldog mix with all the nutrition it needs, it is recommended to feed your Frug 1½ to 2 cups of high-quality dry dog food each day over at least two meals.

How much exercise does a Frug dog need?

Frugs are moderately active and don’t do well when pushed too hard or over-exercised. One leisurely 20-minute walk a day is enough for this doggo.

In addition to their daily walk, the French Bulldog Pug mix will also enjoy indoor play with its family, meeting some new friends at the dog park, or running around in an enclosed garden.

If you have a safely-fenced backyard, letting your fido fetch her favorite ball or scheduling playdates are excellent ideas to serve as an exercise.

For mental stimulation, an interactive feeder would be perfect for the job.

Their short coats rarely shed, but this hybrid is not considered hypoallergenic.

But don’t worry, you’d be glad to know that the Frug dog is not a high maintenance breed, and merely brushing your pooch once a week will be enough.

You can bathe the French Bulldog Pug once a month, being sure to pay special attention to their oversized ears where wax and debris can build-up. When grooming your dog, also be sure to brush their teeth and clip their nails when needed.

Generally, the French Bulldog Pug mix results in a hardy, healthy dog with a lifespan of around 12 to 15 years, which is consistent with other small dog breeds.

While breed-specific issues are rare in first-generation cross dogs, the Frug can be susceptible to some of its parent’s common ailments.

Due to its flat face and short nose, you may find your Frug has difficulty breathing, especially when exercise. As we mentioned earlier, this can lead to Brachycephalic Obstructive Airway Syndrome, which is very common in flat-nosed dogs.

Another disease which the Frenchie Pug may get is atopic dermatitis, a skin disease which is common due to their facial wrinkles. The protruding eyes of the French Bulldog Pug mix can also lead to multiple eye problems such as entropion, glaucoma, and cataracts.

Other conditions that the Frug may get include hip dysplasia and patellar luxation, which will both affect the legs of your dog and may mean your dog struggles to walk in the later years of its life.

Where can I buy Frug puppies?

The French Bulldog Pug mix is one of the most popular and expensive designer dog breeds around with prices for Frug puppies starting at $1200 and reaching as much as $2500.

As they are crossbreed dogs, Frug pups won’t come with their own official pedigree papers, but you can ask your breeder for a health guarantee to ensure that ethical breeding practices have been followed before breeding. This will help you understand that the parents have been thoroughly checked and that your pup didn’t inherit any health problems.

We also advise you to deal with breeders who conduct interviews with potential puppy buyers. With that said, be prepared to answer their questionnaire honestly so that they can be sure that each pup will end up with the right owner.

If you have any questions, it’s also best to have them in writing so you can ask the breeder.

Reputable breeders often offer a chance for you to visit the puppy you’re interested in, so you can see where they live, how well they’re cared for, and you can meet the parents and its littermates. If not, you can ask or request this.

Due to the popularity of this hybrid, many breeders specialize in breeding Frenchie Pugs.

Here’s a website we found to get you started on your search for the perfect Frug puppy:

You can also check out this Facebook page and see their available French Bulldog & Pug mix puppies: GG’s Pug/Frenchie Cross and Shea’s Frenchies.

If you are looking to rescue or adopt a Frug, a good place to start your search will be on sites that cater to short-nosed dogs. Here are some to get you going:

You can also take a look at other mixes of parents breeds from some of their rescue organizations like:

Similar breeds to a French Pug

The French Bulldog and the Pug are often mixed with other small breeds to create an adorable selection of different mixes.

Here are some of our other favorite Pug cross breeds:

Overall, we can say the Frug is a good dog! The Pug cross French Bulldog is a low-maintenance breed that doesn’t require a lot when it comes to grooming or exercise. They are easygoing dogs that are highly adaptable and get along great with a variety of people and pets, no matter the setting.

Suitable for families, retirees, or singles, getting a Frug dog means that you will have a devoted companion that will never leave your side!

Do you have your own Frug dog at home? Please do share with us your own experiences owning this adorable breed by commenting below.