Also known as the Berger Blanc Suisse in French, the stunning snowy White Swiss Shepherd is a gorgeous, much sought-after relatively new breed.

These alert, loyal and energetic dogs are also known as the Weisser Schweizer Schäferhund in German and the Pastore Svizzero Bianco in Italian. Looking for a White Swiss Shepherd to call your own, keep reading to discover everything you need to know about this beautiful breed.

History: Where do White Swiss Shepherds come from? 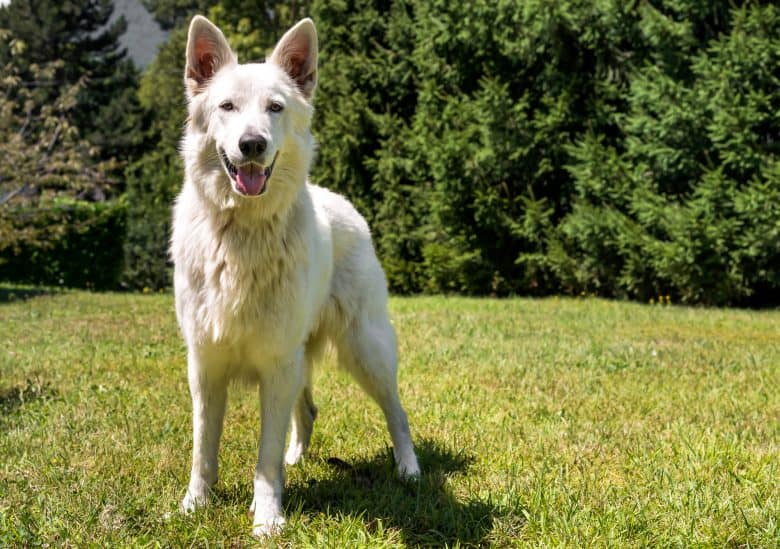 Von Stephanitz, a German captain, is the man credited with creating the first German Shepherd. He was looking for a dog with exceptional herding and working abilities.

The characteristics of the White Swiss Shepherd are very similar to the German Shepherd and the two breeds share many personality and physical traits.

The White Swiss Shepherd Dog is today known as a dog breed from Switzerland.

Around the 1930s people began to recognise the White Swiss Shepherd Dog has its own breed.

Although these dogs displayed some similar characteristics with the German Shepherd, their snow-white colouring and milder temperament set them apart as their own breed.

Despite this, white coloured German Shepherds were not allowed to be registered in Germany.

The white colouring was however loved in the United States and Canada where these dogs gained a following and a breed club was established, although the White Swiss Shepherd does still not receive recognition from the American Kennel Club (AKC).

For a more detailed description of the differences between a White Swiss Shepherd and a White German Shepherd, check out this article.

The father of today’s White Swiss Shepherd is said to be a dog named Lobo who was born in America on the 5th of March 1966.

The owner of Lobo, a Swiss national by the name of Agatha Burch deliberately bred Lobo and a female dog named White Lilac to establish the breed.

Lobo and White Lilac are set to be the pair that founded today’s breed lineage. The White Swiss Shepherd was provisionally accepted in 2002 by the Fédération Cynologique Internationale (FCI).

This was followed by full acceptance of the breed by the FCI in 2011 and official recognition by the Kennel Club of the United Kingdom in 2017.

Today, White Swiss Shepherds are bred as companions and as working dogs. While they aren’t seen as frequently in military and police work as other Shepherds, they are regularly used as therapy or handicap dogs.

What does a Berger Blanc Suisse dog look like?

Being descendants of the German Shepherd, the White Swiss Shepherd takes on many of the characteristic appearances of the Shepherd family, with pointed ears and an elongated face, but on a smaller frame.

The Berger Blanc Suisse has a graceful long rectangular body shape with narrow, but deep, chest, low-lying hips, a tapered back and an erect head.

According to the breed standard, these dogs should have a strong, chiselled, wedge-shaped head that is in good proportion to the rest of the dog’s body. Their heads should not have brow or cheek arches but will have a strong, elongated muzzle.

Their almond-shaped eyes are placed obliquely on the head and will be brown in colour.

Their dense double coat is thick and abundant and well suited to the cold. The undercoat is covered with a medium or long top layer that can have a slight waviness to it.

You could say that this dog breed resembles a beautiful, more regal arctic wolf.

Their large size makes them a good guard dog, especially when matched with their loud bark. However, due to their size and energy level, these dogs are not recommended for apartment-style living and will need a large space where they can run around.

Watch this video to see how big White Swiss Shepherd puppies get from 2 to 6 months of age:

The Berger Blanc Suisse is a gentle and majestic dog that is more relaxed than their German Shepherd counterparts. They’re also not that outgoing and aggressive. Instead, they can be quite shy and even skittish.

Like their smart Shepherd family cousins, White Swiss Shepherds are easy to train and have a high aptitude for learning. This bright and intelligent breed needs and craves training and loves to use its brain to solve puzzles.

These dogs are highly sensitive but also extremely malleable and if trained correctly can be set to work with emergency services or police units. They are particularly well suited to search and rescue exercises.

Even today, the Berger Blanc Suisse is used by farmers to herd and protect flocks and search for lost livestock.

When training the White Swiss Shepherd it’s important to use encouraging, positive reinforcement and to establish who is the dominant leader.

Once you have established yourself as the leader of the park, your White Swiss Shepherd will not leave your side and will follow you everywhere.

These dogs are super eager to please and absolutely love to be the centre of attention. As a result, they like to be included as part of the family and are very intuitive to human emotions.

However, this does mean that if left alone for too long this dog can be susceptible to separation anxiety which can lead to destructive behaviour.

These protective pets are also known to bark at strangers and while this does make them alert guard dogs they will not back up their mouthiness with the strong, aggressive nature of other Shepherd breeds and prefer instead to retreat after sounding the alarm.

This lack of aggression means that the Berger Blanc Suisse is well suited to family life as these dogs are calm and observant around children.

Due to their skittish nature however, these dogs can be wary of other dogs and early socialisation is essential.

They are not great at making new friends outside of their family pack and prefer those of their own kind or animals that are smaller than they are.

New guests should also be introduced slowly to avoid any aggression from your dog.

Showing the Berger Blanc Suisse the same love in return

The White Swiss Shepherd may be a beautiful gentle dog but they do have some necessary maintenance needs that need to be taken into consideration before you get one of these dogs to call you own.

Their double thick coat helps them insulate and reflects the sun so they can handle most weather conditions, especially the cold, however, they should not be left outside for any great length of time due to their separation anxiety.

They also have a number of care requirements when it comes to exercise, grooming and feeding.

Long walks outdoors will not be enough exercise to keep the intelligent mind of the White Swiss Shepherd stimulated.

Due to their working dog drive, this breed likes to perform sports and agility and loves any activity that presents a good challenge. For the alert, Berger Blanc Suisse at least 90 minutes of activity is required every day. 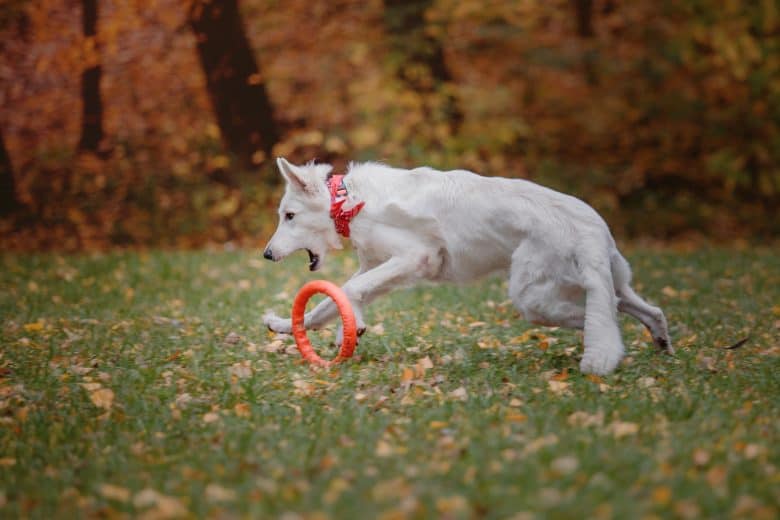 Despite their thick double coat, the White Swiss Shepherd’s coat is relatively easy to handle. However, these dogs do shed all year long, especially during shedding season.

Brushing once or twice a week will be enough. But if your dog is shedding heavily, then daily brushing may be necessary to prevent the hair from clumping.

Their white coat can get dirty easily and so regular bathing may be a necessity, however, be sure to use a gentle dog shampoo and avoid over bathing which can irritate their skin.

You should also be sure to brush your White Swiss Shepherds teeth a few times a week and clip their nails around once a month. When brushing your dog be sure also to check and clean their ears.

Shepherd breeds tend to be more sensitive when it comes to feeding than other dogs and their digestive systems only handle good quality food.

As a result, the White Swiss Shepherd should not be fed table scraps and once you have found a food that your dog likes it’s important to keep this consistent and irregular changes in diet could lead to an upset stomach.

These dogs will need about 3 to 5 cups of high-quality large-breed dog food every day with this quantity spread between two meal times to sustain energy levels.

The White Swiss Shepherd has an average life expectancy of 12 to 13 years, however, this dogs can be prone to some serious health issues.

Common ailments with this breed include bloat which can cause the stomach to contort or twist, Degenerative Spinal Stenosis which can cause leg pain and lead to difficulty in walking, Progressive Retinal Atrophy which can lead to blindness, Degenerative Myelopathy which is an incurable spinal disease and Von Willebrand Disease which stops blood clotting.

Like German Shepherds, this breed is also susceptible to Hip and Elbow Dysplasia which is caused by a malformation of the hip socket and can lead to deformity and decreased mobility due to the constant friction between the ball and socket joint in the hip.

The Berger Blanc Suisse breed is also prone to allergies and a variety of pancreatic and stomach ailments, that is why it is so important to ensure that this dog receives good-quality food.

Where can you buy a White Swiss Shepherd puppy? 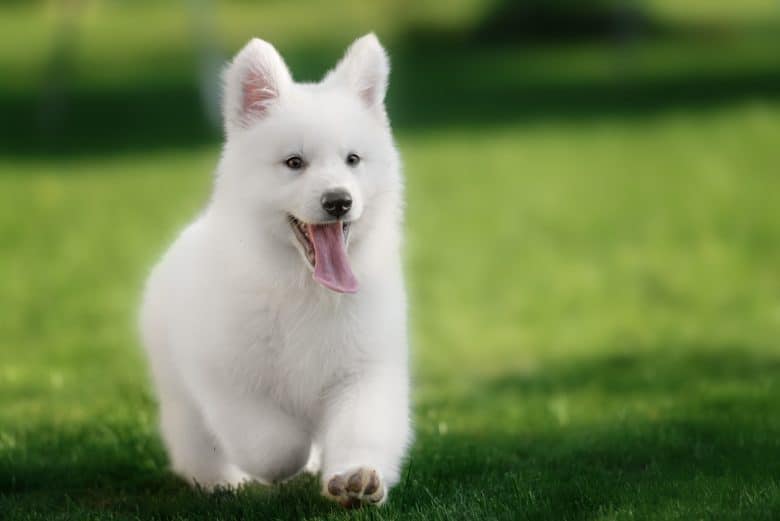 The super cute bundle of white fluff that is a White Swiss Shepherd puppy is highly sought after and very expensive. On average you can expect to pay $1,300 to purchase your very own Berger Blanc Suisse.

If you are ready to buy a White Swiss Shepherd puppy you should be aware of the fact that very few of these adorable puppies are registered each year and you will likely have to go onto a waiting list to receive one.

Before getting your own Berger Blanc Suisse puppy be sure to meet the breeder and visit their establishment.

These highly sought after rare breeds are prone to puppy mill exploitation and thus meeting a breeder and doing the necessary checks is vitally important.

It is also important to check the medical history of the parent dogs and the breeder should be able to provide all necessary health and vet clearances.

Checking these certificates is the best way to ensure you receive a healthy and happy White Swiss Shepherd puppy that will be less likely to suffer from ailments such as hip dysplasia later in life.

Here are some White Swiss Shepherd breeders that may have a puppy for your home:

While it’s always better to rescue or adopt a dog, unfortunately, it is extremely rare to find a White Swiss Shepherd at a shelter.

Finding one of these dogs available for adoption won’t be easy, but here are a few places where you can begin your search:

There are many German Shepherd mixes out there, but being a purebred dog, as you know, the Swiss Shepherd is not one of them.

If you have your heart set on a White Swiss Shepherd but don’t want to pay the hefty price tag or can’t find one available for adoption, there are some similar breeds or crosses that you can consider.

These similar breeds include:

Should you get a White Swiss Shepherd? White Swiss Shepherds are one of those rare breeds that combine beauty and brains. These dogs have the appearance of the German Shepherd without the aggression, making them great around children.

While they may be the ultimate family dog, Berger Blanc Suisse still needs lots of love and attention and are susceptible to a few health issues. In addition, their white coat will need to be well maintained.

Do you think you can handle a White Swiss Shepherd on your own? Tell us what you think about this pooch by leaving a comment below.