When it comes to an English bulldog, what are some thoughts that come to your mind? Some people may think these dogs are ugly-looking, but we beg to differ. For us, English Bulldogs are mellow, adorable balls of cuteness.

But we understand that there are many factors to consider regarding the English bulldog ownership. One of those factors is what color English Bulldog you want. 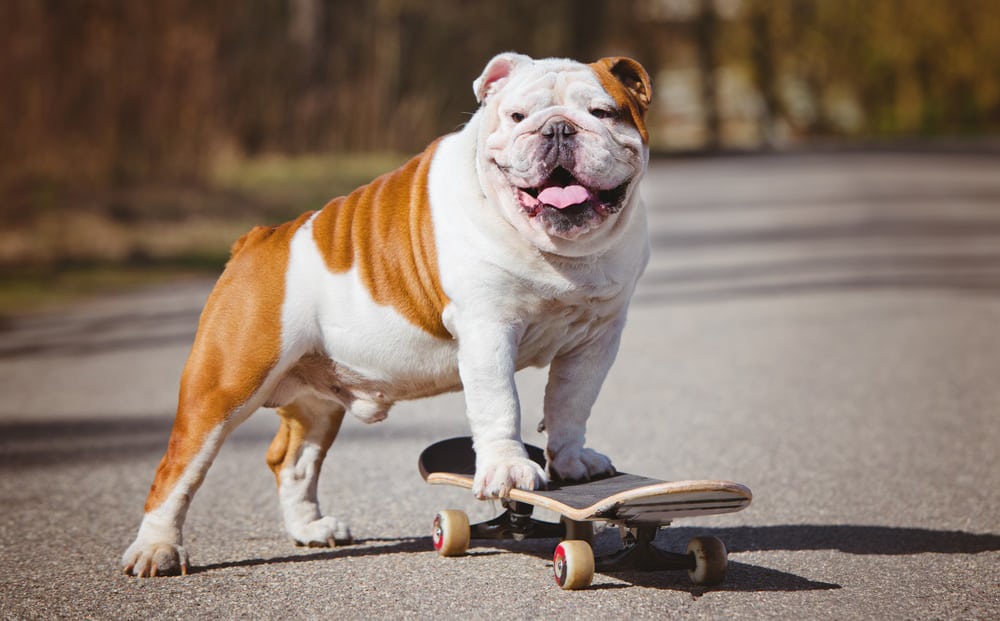 That is why we are here to assist you. In this article, you will find all the information you need to help you select the perfect English bulldog color for you.

These two alleles will give your dog is color genotype. Your Bulldog’s genes will determine his color as well as coat texture and appearance.

What does tri-color English Bulldog mean?

In the English Bulldog dog breed, the term tri-color refers to the presence of three colors. The solid-body color is generally visible with additional tan, red, or fawn spots around the eyebrows and paws.

Even if the markings on English bulldogs are not yet visible in puppyhood, a genetic test can be performed to identify whether they are specific mixes and colors.

Do English Bulldogs’ coats change colors as they age?

Yes, English Bulldog puppies can change colors as they grow older. While this doesn’t happen all the time, it’s pretty common.

A dog’s coat starts to change color somewhere between 6 and 18 months old. Puppy coats can also have a different texture from adult coats in this breed.

What are the Different Colors of a Purebred English Bulldog?

When it comes to the color of your English Bulldog, there are a few to choose from. Each color has its factors to consider.

The purebred English Bulldog can be seen in various shades of red. These shades range from light ginger to a deep red that might look similar to chocolate.

They usually don’t have any other marks on their bodies; however, a few freckles of a different shade or tone can occasionally be seen on their fur.

Fawn can be a popular color for the English Bulldog. This light brownish-yellow color can have a variety of different shades of color. Shades can range from a light tan to a deep deer-red.

While the color itself is a popular choice for these dogs, the term Fallow has fallen by the wayside as most people now refer to these dogs as Fawn English Bulldogs.

5. Any combination of the foregoing

Along with the coat colors mentioned above, English Bulldogs can have various markings on their coats. These include spotted, piebald, or ticked.

Brindle English Bulldogs look like they have tiger stripes on their coats. These stripes can be red, silver, liver, tan, or blue. This brindle pattern can be seen in almost all base fur colors.

These can be a variation of colors, but with the English Bulldog breed, they are usually blue, fallow, red, or brindle on a white base coat. The colors usually occur as spots or saddles on a solid background.

A ticked coat will have flecks or spots of color on white areas of the coat. While an English Bulldog will never look spotted as a Dalmation does, he can have small spots or dicks dotted irregularly around his coat.

An English Bulldog with a black mask essentially has an entirely black muzzle or snout. Sometimes this black mask will spread to their cheeks and foreheads. Most commonly, the

fawn or black English Bulldogs are seen with a black mask.

A dog with black tips on the individual strands of its hair is also referred to as a sable. With these dogs, each strand of hair will have two colors: their base coat and black tips.

This can make the base coat look a lot darker than it actually is. These black tips can fade over time to a grey as your dog ages.

6. A minimal amount of solid black in piebalds

The AKC regulations for English Bulldogs allow for a minimal amount of solid black in piebalds. With piebald dogs, you might also find the spots and patches of color to be of solid black.

This will give your English Bulldog a pretty unique appearance.

It is also not uncommon for English Bulldogs to have white spots throughout their coat. Most of the time, these white markings or spots can be found on your English Bulldog’s stomach, paws, face, and chest.

The third color is usually a light tan or golden brown displayed on the dog’s points, such as around the eyes, cheeks, ears, paws, and tail.

What are the Rarest English Bulldog Colors and Patterns?

Some rarer colored English Bulldogs are not recognized by the American Kennel Club. These colors are infrequently found, and so these dogs can fetch considerable amounts of money.

This is one of the less-common English Bulldog color variations. The color appears to be a beautiful purplish-gray color with blended blue and brown tones. Lilac English Bulldogs often have light green or blue eyes.

Lilac can also be combined with other colors or markings, resulting in variations on the Lilac English Bulldog, such as the following.

Black is a rare color for English Bulldogs. Black English Bulldogs are mainly pitch black, although they can also come with streaks of white and some tan points on their face, chest,

A Blue English Bulldog is simply a black English Bulldog that has been diluted in color by the dd genotype. The diluted color can range from a deep black color or a lighter blue.

The blue color is more of a shade of grey that changes in certain light angles. Their bluish-green eyes stand out on their light silver coats.

A Chocolate Brindle English Bulldog has a different coat which is very rare and very valuable.

This pattern has stripes that are placed along with the fur as well as spots that make the base color of the fur look different. You can also find Chocolate Tri-Color English Bulldogs.

The coats of the Seal English Bulldog have a distinctive reddish or brownish tone. Also, their tails and legs are usually darker than the rest of their fur.

One of the distinctive characteristics of this Bulldog variety is an undertone color underneath the English Bulldog coat’s true hue.

Merle is a scarce color for the English Bulldog breed; in fact, it may be the rarest of all the color variations. The Merle color is defined by a brown-hued coat with gray speckles and spots or white mixed with other darker hues.

Platinum English Bulldogs typically lack pigmentation, and only about 10% of their body will have any color at all.

These color patterns are not uniform and can be found on any part of the body or face. These extremely rare dogs can fetch as much as $6,000.

An albino English Bulldog isn’t a specific color, although the fur appears white, and the nose, ears, eye rims, and paws will be light pink.

Albino dogs have a genetic condition that disables the pigment distribution. This means that they lack color. Breeding dogs to be albino is unethical and can cause many health conditions.

Is it okay to get a rare-colored English Bulldog?

Even though they can’t be recognized or registered with the American Kennel Club (AKC), having a rare-colored English Bulldog isn’t considered an issue.

That said, be very careful of buying Platinum or Albino English Bulldogs; these dogs typically have a genetic defect that causes this variation, and exploiting these defects to breed puppies can have detrimental effects on a dog’s health.

No, the different colors of an English Bulldog don’t affect their behavior. Although black or chocolate English Bulldogs may look more intimidating than light-colored dogs, they are not more aggressive than Fawn or Fallow English Bulldogs.

The AKC states that English Bulldogs should have a kind yet courageous personality that is calm and dignified.

Ye, the color of your English Bulldog’s fur can affect their health. For example, White English Bulldogs are prone to going deaf. Congenital disabilities are also common in some lines, scarce colors which may have been inbred.

As with most dogs, the English Bulldogs are prone to certain diseases and conditions. These brachycephalic dogs have flat faces and small windpipes and are prone to breathing problems.

Due to their skin folds are susceptible to skin infections and hip and knee problems. They are also prone to developing mast cell tumors.

The same genes that give these dogs their distinctive color combinations are also said to cause eye and ear problems which could ultimately lead to your dog going blind or deaf.

Yes, the eye colors of your English Bulldog can change color, particularly as they age. Color is also a good indication of your dog’s overall eye health.

Healthy eyes should be a clear blue, brown, or black without any cloudiness or haziness, while the surrounding area should be white without any signs of yellow.

English Bulldogs generally have poor eyesight and are prone to cherry eye, and any pink or yellow color or cloudiness could indicate eye disease or liver dysfunction.

What colors can English Bulldogs see?

All dogs, English Bulldogs, can see color but not as vividly as humans. They see the world as yellow, blue, and gray.

Green, orange and yellow may all appear yellow to your English Bulldog, while purple and violet are blue and blue-green is gray.

English bulldogs shed a lot of hair. Brushing them one to three times a week is advised.

English Bulldogs are also wrinkly dogs, and you may see that their faces have skin piled up into folds, which can lead to skin problems if moisture or dirt gets trapped in the creases.

When it comes to red, itchy skin, keep an eye out and take them to the vet if necessary to prevent infection. To prevent this from happening, you must regularly clean between the wrinkles.

Conclusion: Which Color English Bulldog Will You Choose?

Some may see the English Bulldog as an intimidating dog breed, but it is one of the most gentle-natured dogs. They can be affectionate and dependable animals and gentle with children.

They are also known for their courage and excellent guarding abilities.

English Bulldogs are very much a people’s dog, and a lot of human attention is required

for the breed’s happiness. If you can provide this dog with the love and attention it deserves, then no matter which color you choose, you are guaranteed to have a dog that loves you and that you love in return.

Do you have an English Bulldog? We would love to learn more about him and his coat color in the comments below.