The German Shepherd Malamute mix, nicknamed Alaskan Shepherd, is a stylish canine with a fun, loving soul you’ve been searching for.

This hybrid looks tough on the outside, but they’re just fluffy working dogs who love your attention. They’re great with kids and other pets, too! Do you have space and love to give this big guy? Read on to find out!

Where did the Alaskan Shepherd come from?

This mixed breed is a cross between a German Shepherd and Alaskan Malamute that likely originated in the early 1900s.

As a crossbreed, the German Shepherd Malamute mix is not recognized by the American Kennel Club (AKC). Still, they were first recognized in 2009 by the International Designer Canine Registry (IDCR) and by the Dog Registry of America, Inc. (DRA).

Even with little info about their history, we can still get to know this fido’s appearance and personality through its parents.

German Shepherds came about through careful breeding by Captain Max von Stephanitz of the German cavalry to herd sheep in the 1800s.

Over the years, people combined various strains of this purebred to produce the modern-day GSD.

The so-called “ideal herder” eventually got recognized by the AKC in 1908, and is now the 2nd most popular breed according to the club.

Known for its loyalty, courage, and hard-working qualities, it’s no wonder they’re one of the top choices to create designer dogs.

Fun fact: The German Shepherd is quite popular in pop culture, too. This breed has appeared in numerous TV shows like the Littlest Hobo, and movies such as I am Legend.

From wolf to dog: the Alaskan Malamute

Alaskan Malamutes, or simply Mals, are descendants of canines from the Paleolithic period. They crossed into North America through the Bering Strait and were named after the Mahlemuts Indian tribe.

They’re bred as sled-carriers because they’re powerful and driven. In fact, they’re part of the oldest sled dog breeds of the arctic.

Fun fact: You may have seen a pair of Alaskan Malamutes, named Buck and Shadow, from the movie Eight Below. It tells the tale of a scientific expedition in Antarctica.

Since both parent breeds have that wolfy look, so will this doggo. They have pointy, erect ears, and eyes that can be hazel, brown, or blue. Then their noses can either be black or brown.

German Shepherd Malamute mixes have great strength, which is evident in their muscular body and sturdy disposition.

How big does a German Shepherd Malamute mix get?

Medium- to giant-sized dogs are NOT suitable for apartment living. They need a house with a large indoor and outdoor space to be comfortable.

No, they’re not. With the GSD and Mal being moderate to heavy shedders, we can expect that from the Alaskan Shepherd, as well.

They have a straight, medium-length double coat made up of a soft, dense undercoat and a thick, rough topcoat.

These fluffy beauties can have a red, brown, gold, black, and grey color coat. But other combinations and shades are possible too, like blue, silver, sable, white, cream, and liver. They can be tricolored, too.

Alaskan Shepherds are affectionate, loyal crossbreeds that are excellent with children. Be cautious and supervise play because this pooch might not be aware of how strong and big they are.

Other than that, they’re gentle and can be placed in a household where there are other pets.

Thanks to their parents’ keen eyes and sharp instinct, they can easily pick up warning signals when there’s a threat. But they won’t excessively bark, not unless they’re alerting you of someone or something suspicious around.

We want to emphasize that the Alaskan Shepherd isn’t for first-time dog owners. Their independence can make them stubborn and would need a pack leader.

Although they tend to get attached to their favorite human and enjoy the company of other people, it’s best to know that this furball is prone to social anxiety.

Early socialization and training are crucial to avoid potential aggressive behaviors, which comes from their GSD parent.

But you’ll be glad to know that German Shepherd Malamute mixes are highly intelligent. As long as you’ve established that you’re the alpha, teaching commands and tricks should be a breeze.

Eventually, they can serve as therapy or service dogs. So go ahead and train your pup as early as two and a half weeks.

Want to see how smart the German Shepherd-Alaskan Malamute cross is? Watch this video of Zoey instinctively herding goats!

They’re typically easy to train, but you need to be gentle and use positive reinforcement because they can be fragile when it comes to discipline.

It would be best to limit the training durations, so your pup doesn’t become bored and stop listening to you — make the best out of those short, intense sessions!

After bringing your Alaskan Shepherd home

Be aware that these dogs require moderate to intense maintenance. They need some serious upkeep. Are you up for it?

For starters, thick coats like this need brushing 2 to 5 times a week, but it will still depend on how long your pet’s hair is.

But we’re glad to give you some grooming tips to make this task easier. First, remove your German Shepherd Malamute mix’s collar or any other accessories.

This will provide you full access to brush her coat, especially the parts where matting often occur, like the neck area.

Get your bristle brush and run it in one direction. It’s best to use a slicker brush to remove knots and loose hair while stimulating the coat’s natural oils.

Some owners use a deshedding tool twice a week to lessen the amount of shedding.

Baths should only be given when your doggo looks and smells dirty to avoid drying her coat and skin. And use a soothing shampoo that has aloe vera and oatmeal.

For that weekly ear cleaning, use a cotton ball and a dog-specific ear solution. And make sure they’re dry to avoid infection.

The frequency of nail trims will depend on activity level since dogs can naturally wear down their nails with exercise. If you hear clicking when she’s doing tippy taps, it’s time for those nails to get trimmed.

Check your puppy’s paws, too. They could get dry and scaly; if this happens, you can use Vaseline as treatment. If that doesn’t work, consult your veterinarian.

Close attention to your dog’s grooming needs will allow you to watch for early signs of severe conditions, such as skin lesions.

Exercise: How active are Alaskan Shepherds?

The Alaskan Malamute-German Shepherd cross has parents with a working background, so we can expect this pooch to be highly active. But at least an hour of exercise a day will be sufficient.

Plan for a range of activities to keep your fur baby engaged. Aside from the usual walks and dog park visits, bring her along when you’re going for a jog, a hike, or a swim at the beach.

They also need mental stimulation. Interactive toys like a Kong ball and puzzle games will keep her busy whenever outdoor play isn’t an option.

When the weather’s good, let your canine friend outside, but only in a secured area.

You can play fetch with her, or give her time to enjoy sniffing and running around. But never let your Alaskan Shepherd out when it’s too warm because they can quickly overheat.

The best food for a German Shepherd Malamute mix 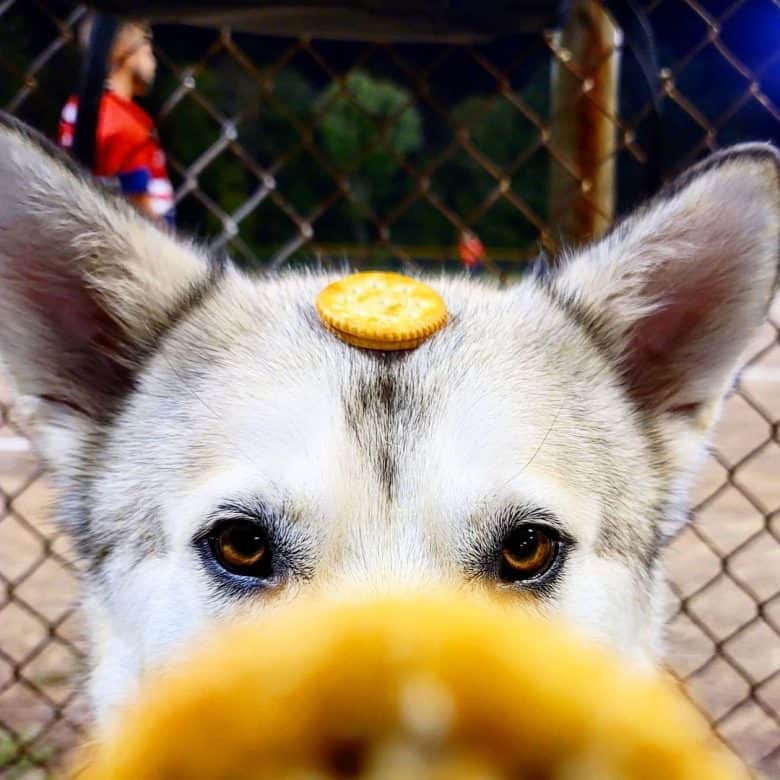 The kind of diet and amount of food you should give your dog will depend on her age, weight, metabolism, and health.

It’s recommended that you feed your fido 2 to 3 cups of high-quality dry kibbles split into two meals a day.

Dry dog food has many advantages, like keeping your pet’s teeth and gums healthy. Choose a brand with high levels of protein and calcium, as well as easy-to-digest ingredients like rice, chicken, and barley.

Hypoallergenic dog food may also be a great choice since the German Shepherd breed is prone to various allergies.

This crossbreed can also suffer from obesity, so we advise that you stick to a regular feeding schedule, keep doggy snacks at a minimum, and don’t give your pet table scraps. Resist those puppy-dog eyes!

Are these dogs healthy?

Crossbreeds are generally considered healthier due to hybrid vigor, and for the German Shepherd & Alaskan Malamute mix, they have an average lifespan of 10 to 13 years.

Still, all dogs can inherit some of the health problems that their purebred parents are predisposed to.

The illnesses that the German Shepherd and Alaskan Malamute can pass on to their mixed-breed offspring are elbow and hip dysplasia, degenerative myelopathy, cartilaginous exostoses, chondrodysplasia, and Von Willebrand’s Disease.

It doesn’t mean that your pet will get all these health issues. To ensure that she’s safe from these diseases, she must get an elbow and hip evaluation, an ophthalmologist evaluation, and a Polyneuropathy DNA test.

Where to buy Alaskan Shepherd puppies?

There are many places where you can find a German Shepherd Malamute mix puppy for sale. Unfortunately, designer breeders have become a bit excessive, and it’s challenging to find a reputable breeder.

Alaskan Shepherds are also relatively rare, and one pup’s price starts at $800.

Since there are numerous dogs left in shelters in need of a good home, we recommend adoption, whether you’re looking for a purebred or crossbreed.

Fixated on buying from a breeder? Do your research and ask questions before deciding who to buy from.

Responsible breeders mostly require potential buyers to visit their kennel for a meet-and-greet, as well as to conduct interviews.

They’ll also show necessary documents related to the parents’ and the litter’s lineage and health.

If they think you’re a good match with one of their puppies, they’ll offer a health guarantee and a return policy, which you’ll find in their contract.

We couldn’t find a kennel currently producing this designer dog, but these rescue organizations for German Shepherds and Alaskan Malamutes also cater to their mixes.

It’s understandable if you feel like the German Shepherd Malamute mix is not the breed for you. In fact, we encourage you to get a dog that aligns with your lifestyle.

Here are other designer dogs you may want to check out:

Don’t miss: 23 Malamute mixes: Which one is the best for you?

Is a German Shepherd Malamute mix the right dog for you?

This wolf-like doggo has some fantastic characteristics. They’re loyal family companions that are keen about their surroundings and do well with other pets.

If the excessive grooming isn’t an issue and you have a spacious home to offer this pup, the Alaskan Shepherd might be the breed for you.

Think about the other cons, as well, like how they can become too independent and tend to overeat. So, taking care of a dog this size isn’t going to be cheap.

If you’re a first-time dog owner, you may want to consider the other mixed breeds we mentioned earlier.

What do you think about the German Shepherd Malamute mix? Let us know by leaving a comment below.