If there’s one dog that stands out among the rest, it’s the Blue Merle Australian shepherd. With its striking coat and dazzling eyes, it’s hard to miss.

Wondering if this incredible pooch is right for you? Here’s what you should know. 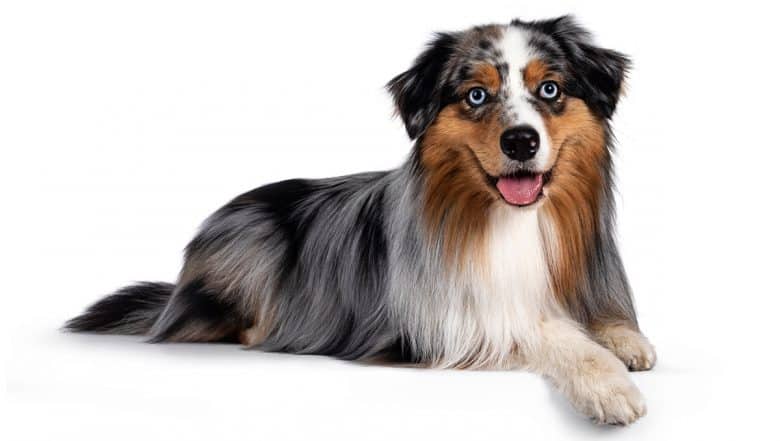 The Blue Merle Australian Shepherd at a Glance

We’ve put together a table below to give you a quick overview of the Blue Merle Australian Shepherd.

Where Did the Blue Merle Australian Shepherd Originate?

You might assume that the Blue Merle Australian Shepherd was bred in Australia, but it was actually developed entirely in the United States.

They’re the descendants of dogs who were raised by sheepherders in the Basque region of Europe and later Australia before coming to the US in the 1800s.

They’re part of the American Kennel Club (AKC) herding group, along with dogs like Border Collies, Shelties, and German Shepherds.

Blue Merle Aussies are recognized by the AKC, the United States Australian Shepherd Association, and the United Kennel Club. Other recognized colors include red, red merle, and black.

What Does a Blue Merle Australian Shepherd Look Like?

Blue Merle Aussie dogs don’t look different than any other Australian Shepherd except for their coloring. That means that they have a proportionate head with a tapered muzzle, triangular ears, and a scissor bite.

Perhaps one of the most distinctive traits of a Blue Merle is its eyes. They can have brown, blue, or amber eyes that can be either solid, marbled, or flecked with color.

They may have a darker amber ring around the iris and/or several brown flecks. 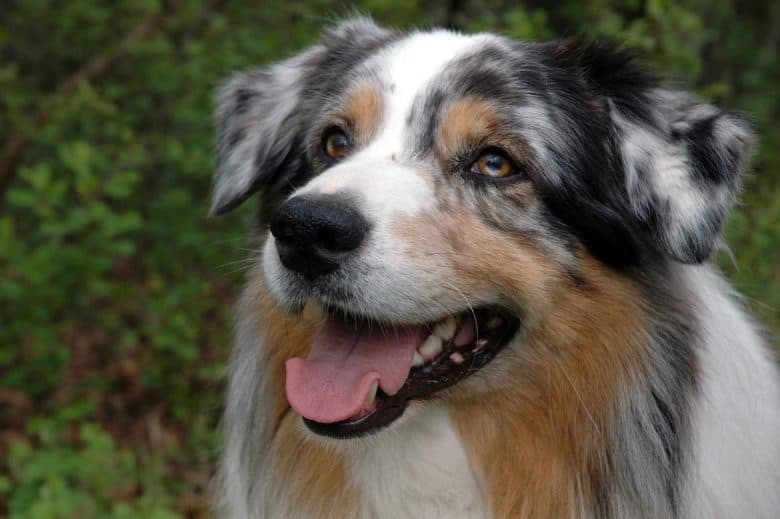 They may also have two completely different colors or color patterns in their eyes, a trait known as heterochromia. As you can imagine, these pups really stand out and may have one blue eye and one amber or brown eye.

According to the breed standard, the neck is arched and transitions into a straight, strong back that is level from withers to hips.

They have well-sprung ribs and a straight, short tail. The tail can be either naturally short (bobbed) or docked.

The Size of a Standard Blue Merle Aussie

There is also a miniature Australian Shepherd, but it’s considered a separate breed.

All About that Fabulous Coat

Another distinct characteristic of an Aussie is their beautiful coat and distinct coloration.

All Aussies have what is known as a double coat. That means that they have a medium-length outer layer that is fairly water- and weather-resistant and can withstand heavy wind, rain, and snow.

The coat also vary from straight to wavy. 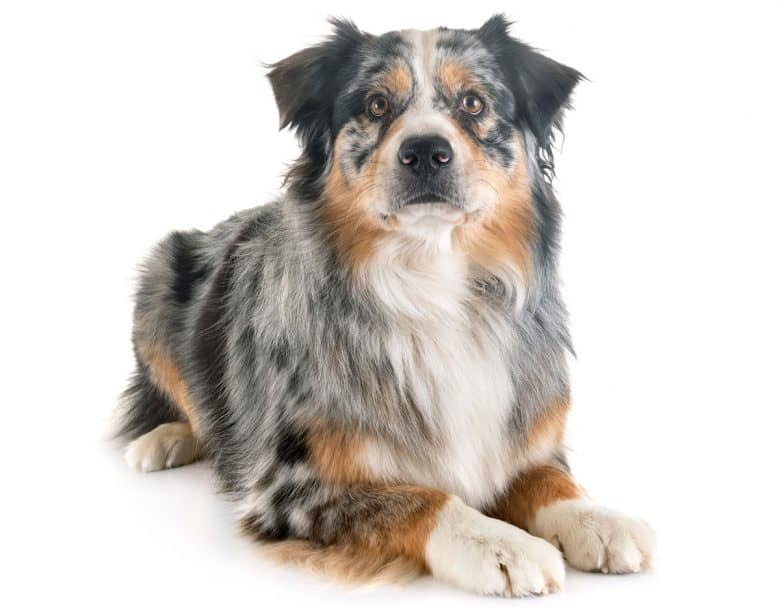 The shorter inner layer provides insulation so that these dogs can withstand the heat and cold better.

When it comes to Blue Merle Australian Shepherd genetics, there are two possible patterns that they may inherit: solid or merle (which is a mottled, multi-color pattern).

Each merle pup had at least one parent with the merle gene.

They also inherit one of two base colors: red or black. Blue merle Aussies have a black base.

It’s possible to breed two merle dogs together, but the pups often have health problems. Coat color does not appear to impact personality, at least as far as science has been able to tell so far.

The color patterns of a blue merle coat can vary. They may have a piebald or solid coat with black patches. They often have white markings, especially on the legs and face. They may also have copper or tan markings throughout.

The variations are generally broken down into four types. First, there is the solid blue merle color where the dog has a gray coat with random black spots.

The gray can be dark, light, or anything in between. These are less common than the other types.

The next type is the blue merle and white, which is similar to the solid, but they have white markings on the face, legs, and chest.

Then there’s the striking blue merle tricolor Aussie. This one has the base of blue merle with white spots, plus tan or copper markings on the face, legs, chest, or belly. 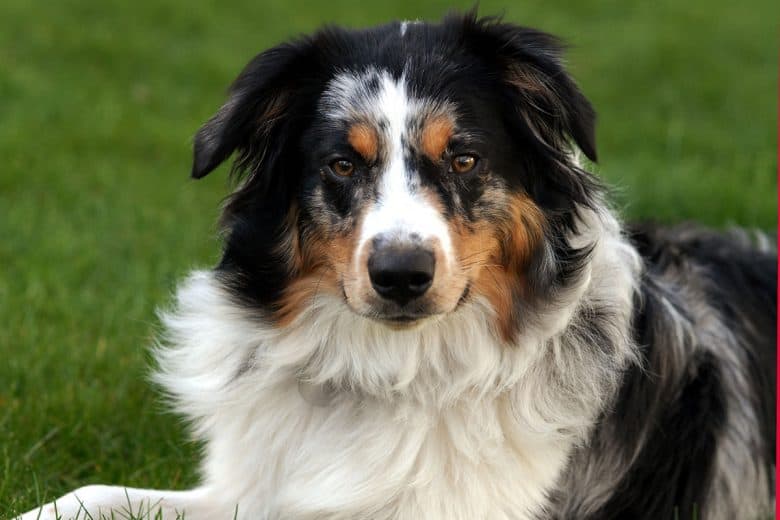 The blue merle and tan type has no white markings but does have tan instead. This is also rarer.

Get to Know the Blue Merle Australian Shepherd Personality

When you think of athletic, working dogs, the Aussie probably comes to mind. That’s because they’re high energy and love to have a job to do.

It’s hard to understand the Australian Shepherd temperament without keeping that in mind.

This video featuring a blue merle aussie shows you just how athletic they can be!

That’s why you often see them working alongside cowboys or as service dogs. They also excel at sports like flyball, agility, and frisbee. An Aussie who doesn’t get to be active can be bored, depressed, or anxious.

Keep in mind that this dog was bred originally for herding, and that’s what it likes to do.

If it doesn’t have sheep to move around, it may try to herd you and your kids or other pets. That can be funny, but it can also be dangerous if they nip to try to get you to move.

Don’t worry, you can train them not to nip, and Aussies are one dog breed that is pretty easy to train.

An Aussie, no matter the color, is an ideal pup for an active person or family. They won’t be content to sit around the house and snooze. They want to go hiking, swimming, running, and playing right by your side.

Early socialization is key to making them a happy member of your household. They need to learn the rules young and they need to understand where they fit in your pack.

It’s also important to introduce them to new people, new dogs, and new situations often while they are young so that they don’t become nervous, shy, or skittish. Obedience training is also a great idea.

Aussies in general are polite with strangers, though not overly friendly. They love their people, however, and are loyal little snugglers.

Some people call them velcro dogs because they always want to be attached to their humans.

This definitely isn’t the best dog for dog owners who are out of the home and away from their pets a lot.

How to Take Care of Your Blue Merle Australian Shepherd

You want to give your dog the best life possible, right? Here’s how to take care of your Aussie.

Having a Blue Merle Australian Shepherd means you’ll be dedicating a lot of time to exercising your dog.

Remember, these are highly active dogs. But it doesn’t have to be a chore. Make it fun for both you and your pet!

Aussies have a high energy level and you’ll need to keep them active so that they don’t become destructive. That means exercise, at least 1 to 2 hours per day.

Exercise can be in the form of brisk walking, running in the backyard, participating in dog sports, jogging, fetch, or anything else that gets them moving.

They also make great therapy dogs, which gives them the mental stimulation they need.

They’re also often trained as search and rescue dogs, but even if you don’t train them to do the work, you can exercise them by hiding and having them find you.

All Aussies, regardless of color, need to be groomed at least once a week. That means taking out the brushes, ear cleaner, and toothbrush. You don’t need to brush them on a daily basis.

Brush your dog once a week with a comb to smooth their long hairs. Then, use an undercoat rake to get rid of any mats and to remove excess hair.

Blue Merle Australian Shepherds shed a lot, but shedding gets heavier during shedding seasons. Hence, this helps grab the hair so you don’t find it all over your house.

You may also want to make an occasional visit to the dog groomer so that they can tidy up the leg hair and give your pup a good once-over. They can also help if your dog gets extremely matted.

When it comes to bathing, you should give your dog a wash every six weeks or so, unless they get particularly dirty while out playing. Herding dogs that are actively working may need more frequent bathing.

Don’t shave your Aussie even if they seem to get hot in the summer. Their coat is an important element of protection for them.

Food is an important part of keeping your dog healthy. So how much food should a Blue Merle Australian Shepherd eat?

It depends on their energy level. A working dog needs more food than one who is less active. Plan to give a dog that weighs 50 pounds about 1300 calories of high quality, high protein dog food.

Keep an eye on them to determine if they look like they’re getting too fat or thin and adjust accordingly.

Aussies are generally healthy, but like all purebreds, they do have some health challenges that you’ll need to watch out for.

Eye problems are common and you may encounter things like coloboma, cataracts, or Progressive Retinal Atrophy (PRA).

You may also run into some ear problems like deafness, particularly if you have a double merle pup. A double merle dog is one whose both parents are merle. These dogs often have health problems, usually with their eyes.

They may have missing eyes or abnormal eye development, and they may have reduced eyesight or blindness in one or both eyes.

The Australian Shepherd, no matter their color, can have joint problems like hip dysplasia and elbow dysplasia.

Also watch for cancer, epilepsy, drug sensitivity, and hypothyroidism. You’ll want to do a yearly health screening with your vet to make sure that your dog is healthy.

The Aussie dog has one of the longest lifespans, typically living to be 12 to 15 years old. The most common cause of death is cancer.

How Much is a Blue Merle Australian Shepherd Puppy? 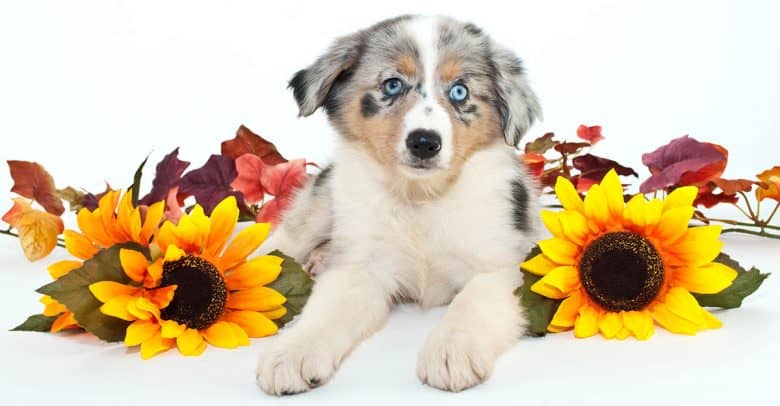 Now that you know all about the Blue Merle Australian Shepherd breed, maybe you want one of your own? If so, you no doubt want to know how much they cost. Typically, you can find one anywhere from $1,500 to $2,500.

Don’t miss out: The Overall Australian Shepherd Price is Revealed

Check with the AKC and with the ASCA to find breeders that are breeding healthy Aussies. They’ll be able to point you in the right direction to find responsible Australian Shepherd breeders that have blue merle dogs.

You might also want to consider adopting a blue merle Australian shepherd. Again, the ASCA can point you to a good rescue organization.

The Aussie Rescue and Placement Helpline is also a good place to check.

Who Should Get a Blue Merle Australian Shepherd Dog?

The pros are that these dogs are smart, athletic, sweet, loyal, and obsessed with their owners. They are also protective and affectionate. Plus, they’re undeniably beautiful with that blue merle coat.

The cons are that these don’t make good pets for anyone who is more of a couch potato, or someone who isn’t home very often. That’s because these dogs always want to be by your side.