The Shih Tzu is a small dog with a big personality. Known as the “lion dog,” these lively dogs are affectionate, sweet, and adorable.

They’re known for their glorious, flowing coat, which comes in a huge range of colors. We’ll tell you all about them in this article. 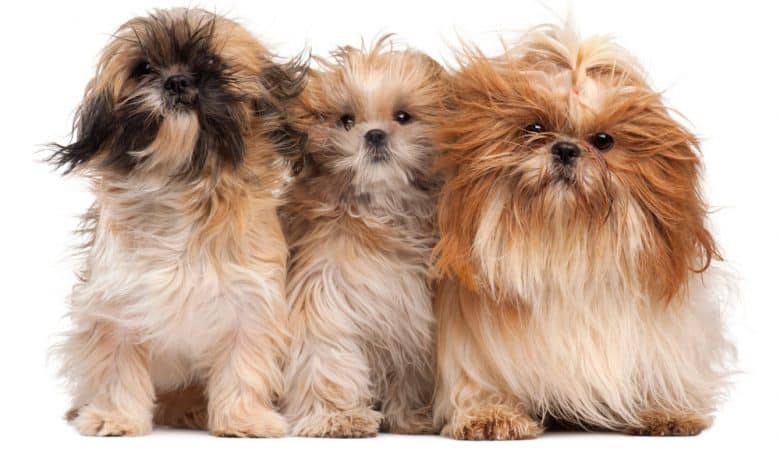 The Classifications of Shih Tzu Colors and Combinations

The American Kennel Club (AKC) dictates the breed standard which spells out what official colors these beautiful dogs can come in.

They have a list of colors that a dog can be registered under when a breeder registers their new litter.

But that doesn’t mean that dogs don’t come in other colors. They just aren’t necessarily recognized by the AKC.

Here are the common colors you’ll see, whether they’re recognized as official coat colors or not.

While many people have seen multi-colored dogs, Shih Tzus can be a single, solid color.

These solid dogs can be all black, all white, all silver, all gold, all blue, all liver, all red, or completely brindle.

Brindle is a pattern that looks somewhat stripe-like. You’ll often see brindle dogs with a red base and brown stripes or a brown base and darker brown stripes.

The stripes can vary from thin and narrow to wide, and the variation can range from extreme to very subtle.

You might be asking yourself, what does a blue Shih Tzu dog look like? No, they don’t have the same color as the ocean.

Blue dogs are those with a silvery-gray color to them. It’s not the same as actual silver or gray, however.

Blue is usually darker than silver or gray, and blue dogs will be born almost black. They gradually turn “blue” and their color changes as they get older. A blue dog will have a blue nose, lips, and eye rims.

The color is caused by a recessive gene, so they aren’t as common. Technically, blue is a form of dilution of black that comes from a dilute gene.

Only dogs with blue skin can be considered true blue, as skin is the true marking of a blue dog, not coat color.

A solid black dog is an extremely rare color and you don’t see them too often.

Liver dogs might range from creamy to dark, deep chocolate, but the thing that makes them technically liver-colored is that they have liver pigmentation to their skin, including lips, eyes, paw pads, and noses.

No matter the color, all Shih Tzu dogs will have black eye rims and a black nose, except for liver-colored dogs and blue dogs.

Liver dogs can have a liver pigmentation in their nose and liver eye rims, and blue have blue eye rims and noses.

Solid dogs can actually have a marking of another color. So what’s the difference between a solid dog with a marking and a double colored dog? It depends on the percentage of the second color.

For instance, a very small patch of white on the chest is a marking on a solid dog, while a black dog that has a white face, feet, tail, and chest would be considered to have a two color combination.

A completely solid dog without any markings is pretty rare, but they do exist.

In addition to solid colors, Shih Tzus can come in a combination of two coat colors, sometimes known as parti.

These are broken down by the base color of the coat. For instance, a Shih Tzu can have a base of a white coat with black, red, grey, charcoal, gold, brindle, blue, liver, or silver markings. That’s a lot of different colors!

Black and white Shih Tzus might have white feet, neck, and face, with black ears, tail, and back. You’ll sometimes hear these called “piebald” dogs.

Shih Tzus might also come with a red base and black, gold, charcoal, grey, white, or silver markings.

Finally, they might also have a black base with gold, brindle, silver, or liver markings.

Almost all parti dogs have white as one of the colors, but you may see a rare dog with two colors, neither one white.

You might also see any of the two color combinations with tan markings.

While they aren’t official colors, you might see a Shih Tzu dog’s coat that doesn’t fit any of the descriptions above.

For instance, some dogs have chocolate coats or chocolate markings. Chocolate is a very dark brown color that can almost look black.

Technically, the AKC doesn’t recognize any “brown” color at all. They allow brindle and liver, though a dog that is technically liver may be dark enough to almost look chocolate.

If the pooch has a liver pigment to their nose, then it is technically a liver dog, even if they’re dark brown.

Some puppies are born solid brown, but their coat changes as they mature, often turning lighter.

Then there is a color known as lavender. No, the dogs aren’t purple. Instead, they are another variation of liver that almost looks like it has a bit of silver in it.

Get to Know the Coat Patterns

So you know that the Shih Tzu breed can come in a range of colors, from single to three colors, but what patterns do these colors take on?

One is known as blaze, where a dog has a strip of white going up the middle of their face from the nose and up between the eyes.

There is also a flare, which happens when the blaze widens out like a fan across the dog’s forehead.

A collar or shawl is when there is a mark around the neck that looks like the pup is wearing a shawl. This is usually white, but it can be another color.

Tuxedo markings are when a dog has a white patch on the chest and also sometimes the chin or feet. The result is a dog that looks like they have a tuxedo on!

Finally, you may see pooches with what is known as a saddle pattern. As you might have guessed, this means that they have a different, usually darker, color across their back, resembling a horse saddle.

Black markings can come in some interesting patterns when it comes to Shih Tzu dogs.

There is a marking called the black mask, which might make you think of burglars or raccoons. But actually, it looks like black on the muzzle of the dog, which may or may not extend to the eyes and the ears.

There are also dogs with dobie markings, though this is very rare. Dobie markings are tan marks on a dark coat. These tan marks are above the eyes, on the jowls, the lower leg, and under the tail.

Think of a Doberman Pinscher dog breed and you get the idea.

Finally, you might see dogs with what are known as black tips. Dogs with black tips are one color but each strand of hair has a black tip at the end of the hair shaft.

This color goes away when the puppy has its first trim, though.

That’s because all those black ends are cut off and they don’t come back.

Shih Tzus have a range of possible eye colors, though the AKC says that they should be dark, no matter the color.

You might see lighter colored eyes, like light brown, golden, or even blue eyes on dogs with liver or blue pigmentation.

Do Shih Tzus change color as they age? 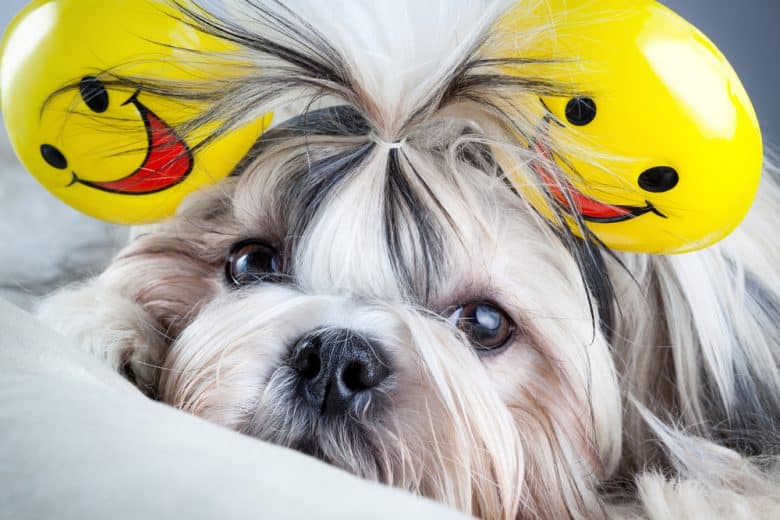 Some dogs stay the same color their whole lives, but Shih Tzus tend to change over time. The coat that a Shih Tzu puppy has isn’t necessarily the coat they’ll end up with as they age.

There’s no way to know for sure how a puppy vs an adult will look for certain, though you can look at the parents to get an idea.

Sometimes a dog will get lighter, some get darker, some lose their pattern or a new pattern emerges. Many times, a Shih Tzu will lose their color and become overall lighter.

Red, in particular, tends to lighten with age and a red puppy may eventually look golden when they are older.

No matter what color your dog is, or whether they start out one color and shift to another, there doesn’t appear to be any evidence that it can impact their health in any way.

Some breeds have certain colors that do have health implications, like dalmatians and Australian Shepherds. But that’s not the case with Shih Tzu coat colors.

Many Shih Tzu owners wonder if they should pick a certain color of dog in order to ensure a certain type of personality. 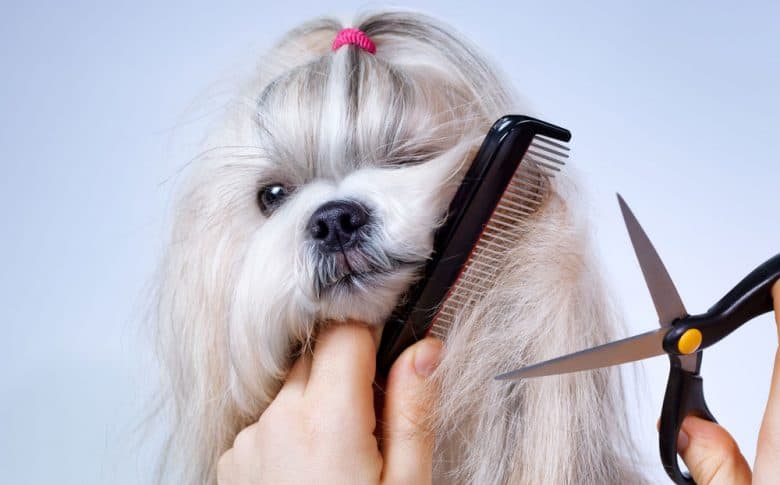 Whether you have a liver Shih Tzu or a black, red & white pup, the care is all the same. Depending on the length of the coat, you may need to give your dog a daily brushing.

Shorter coats don’t need to be brushed as often.

If you decide to cut your dog’s coat short, you’ll need to commit to regular haircuts.

On top of that, you should bathe your dog every six to eight weeks (unless they get extra messy, of course!). Use a shampoo targeted at long-haired dogs. Finish off with a conditioner to help reduce tangles.

Some dogs with longer hair may need to have their hair tied up when they eat to prevent getting the ears and chin chair really messy.

Which of these Shih Tzu Colors is your favorite?

Do you swoon for the shade of a liver color dog? Or are you partial to a pretty brindle pooch?

With such a wide variety and so many variations, there are a lot of options to fall in love with. What color is your favorite?